"Mom, can I push this plastic box down the steps?"

Did some of this delicious kaleidoscoping today. In case you haven't noticed, it's a fine early-season crop of watermelons this year.

Sunday, June 04, 2017: Another winner of a day, though the winds did their typical switching about, doing one of those near 360s common to summer land/sea breezes.

This entire week will be unstable but not overly gusty. Keep a close ear open for thunderstorms, especially tomorrow. These won’t be biggies along the coast but that’s what makes them dangerous; they arrive without much warning. All it takes is a lone rogue bolt to kill a day’s fun. I’ll always be paranoid of thunderstorms having lost many fellow beach/surfing folks to lighting.

BLOOD FLOWS: Did a load of outback time this weekend and must again warn anyone venturing near the woods that we’re in some kind of tick burst period. Just in case you think I’m overstating it, I got this worrisome post: “Mayor Gary is down with very bad head cold and tick bite, Lyme ...”

Not as bad, but always a horrid pain in the ass and elsewhere, chiggers are now out in force, too. They’re precisely the best known of the Trombiculidae … although the harvest mite chigger usually do not carry diseases in North American temperate climates,

I took some chigger hits to the back of my hand, a common location for me, knowing how to dress to thwart them.

There remains a misconception that chiggers are tickish bloodsuckers. They ain’t … technically. They don’t burrow, headfirst, and stay put. Instead, they gouge out a path of skin then allow ugly acidic enzymes to rot the skin’s surface. Nice, huh? They can get to their itch-causing business as soon as they light on one’s body. And talk itch-making enzyme.

Per www.medicinenet.com, “A common myth about chiggers is that they burrow into and remain inside the skin. This is not true. Chiggers insert their feeding structures into the skin and inject enzymes that cause destruction of host tissue. Hardening of the surrounding skin results in the formation of a feeding tube called a stylostome. Chigger larvae then feed upon the destroyed tissue. If they are not disturbed (which is rarely the case because they cause substantial itching) they may feed through the stylostome for a few days.” 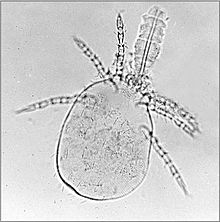 Adult: No danger by this time. And the only time you can see them. 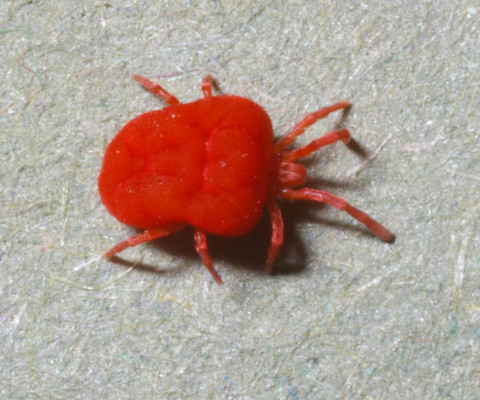 WOW, THAT’S FAT!: I love getting wild and weird photos like this surf striper taken by Paulie Antenucci. Are you kidding me!?

This striper must have thought it was a freshwater buckemouth bass, the only other fish I’ve seen acquire a gut like that.

Truth be told, I first pondered some sort of tumor. But a tumor can’t be the exact shape of a fish’s entire stomach and digestive cavity. Nope, this fatso went out binge eating, somewhere loaded with foodstuff out the wazoo. And still scarfed down a baited hook. I wonder if this will bring Richard Simmons out of seclusion.

Yes, I even pondered the possibility that it had cannibalistically eaten a fellow striper. Nah. The mouth on this fish could only have open so wide. You’ve seen photos of DOA bass that have realized, way too late, that an oversized meal was beyond both its swallowing ability and its regurgitative capacities. In the weirdest term, this fish could not have opened its mouth wide enough to eat itself, meaning the belly is bursting with multiple mega-entrees.

Another good point was brought up by a commenter who noted something I’ve been hearing. Tim Clark: “Can't get over the gut, man. All my fish are lean and hungry.”

Unfortunately I'm not counting it as a catch ! Made a cast as soon as the plug hit the water my rod doubled over . Whether she ate it and missed or tail slapped it I'll never know but she came in snagged in the side . But what I didn't expect is when the water receded to see this huge lump laying on the sand lol I didn't expect girth like that . Released and swam away strong .#44lbs#surfcasting #stripedbass (I constantly warn about driving blindly into Pinelands puddles ... Voila. I know this one well. j-mann)

Somebody trying to play with the big kids — at Stafford Forge Wildlife Management Area. First bass of the season on old bunker! 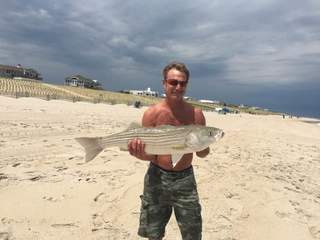 We scored big time tonight right before the wind set in! All fish released, crazy night at prom yesterday last day of high school tomorrow, all going by so quick. 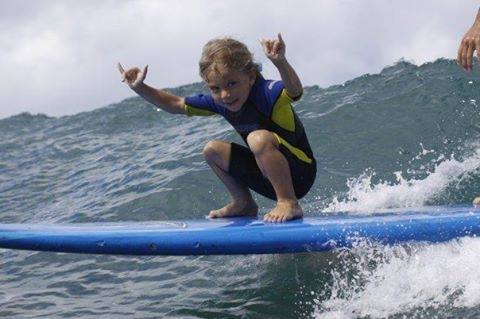