Sunday, July 28, 2013: Iffy skies out there today and winds could get cranky out of the south. Hopefully, folks cashed in on sunshine and fineness yesterday, though today’s clouds are ideal for “subdued” lighting when fishing shallower areas, including the surf line.

Had some fun fishing small weakies last night. Found a new bayside street end in Surf City where I could easily cast into the channel and work back into shallows. Had one slammin’ take but my small jighead offering was way outclassed, though I worked it for maybe two minutes. Likely a larger weak since it didn’t bite me off (blue) or fray the line (bass). It just spat the hook. Also, hooked a nice fluke but lost it trying to lift it over bulkhead. No biggy. It was going back anyway.

Lots of small sharks out there. Spiny dogs are fooling some folks who didn’t know they have (smooth) teeth -- that rotate into position when needed, the same as larger sharks.  However (!) I also got photos of three different large brown (sandbar) sharks -- per usual, they’re being mistaken for threshers. The thresher’s tail is almost absurdly long. I also heard of another brown, possibly dusky, that a knowledgeable surfcaster (who was watching the hookup) pegged at maybe 100 pounds, based on the one surfacing it did before biting off mono leader. I didn’t get if it was a boat or surf hookup.

Here’s a fun report – and a sizzling sheepshead to boot.

Went out to the north jetty this AM to do some shrimping. Not too much of a problem with the leftover swell. Just made sure I had a good anchor set.
Based on my trawl pulls back behind the dike the crab population has never looked better. In seven or eight pulls I must have had to empty out 300 1" to 3" crabs and also a week ago I had many small fluke with today only 3 or 4. It's still the best shrimp showing I've seen in 5 years or so.
I hooked up early and I thought I had moby blackfish on. It ended up being a 12-4., 24" sheepshead I believe, since it had a full set of teeth and not the black drum pharyngeal teeth.

I ended with about six 18" blackfish and one 15" bass. After I ran out of shrimp I went to the inside of the rocks and through some plastic and the bluefish just crushed everything. There were birds going crazy the entire length of the jetty and baitfish going air bound on top of the rocks. 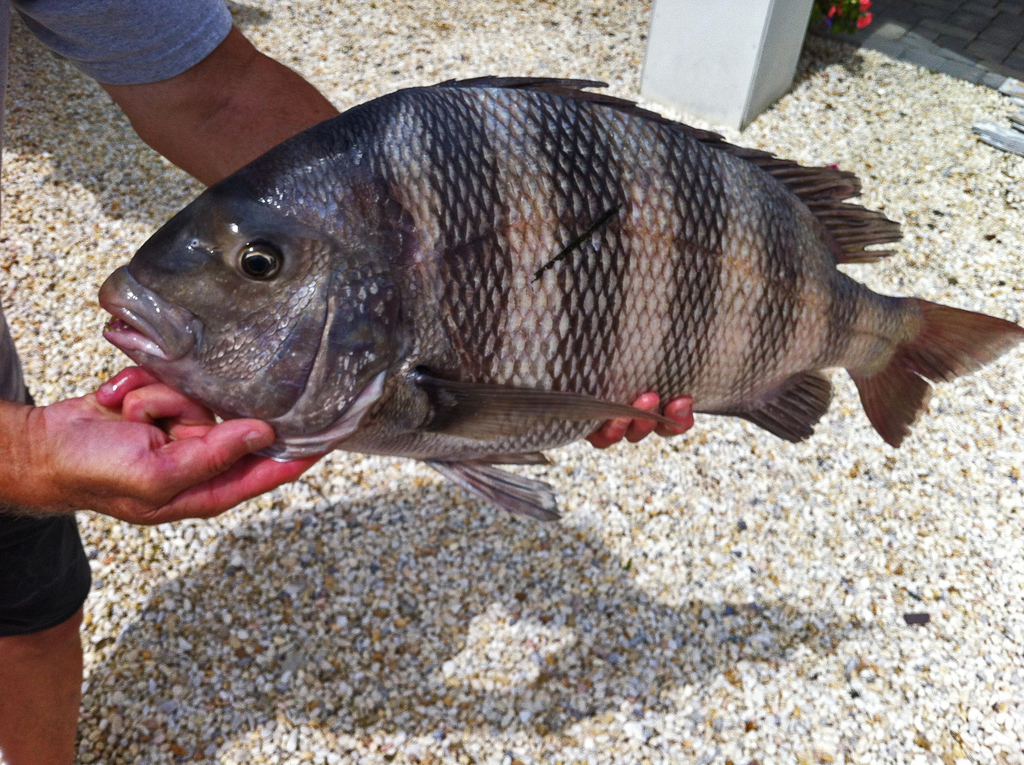 As the glow of the setting sun lit up the Beach Haven Marlin & Tuna Club on a perfect summer evening, the Jersey Hooker out of Manasquan pulled up at the scales with a tuna to weigh. As the weighmaster and staff prepared to lift it out of the cockpit, whispers rippled through the crowd.

“Really?” one woman said. “That’s amazing. They should be applauded, especially if it’s a big fish.”

What she had heard — and what soon became common knowledge among the crowd — was that the crew of the Jersey Hooker had reported that the tuna they were about to weigh was not eligible for the tournament, because they’d done a hook-and-hand on it. One crew member had hooked it, and handed off the rod to another angler to land the fish, a move that is against the rules of the White Marlin Invitational and most tournaments, for that matter.

“They should be applauded for their good sportsmanship,” the woman said. And she’s right.

We’ve all heard stories about boats whose crews have cheated in a tournament. It’s why, especially in the big-money events, that polygraph tests are almost standard these days. Usually the rumors and stories are related in hushed tones, because no tournament likes the implication that someone tried or nearly succeeded. And the times when people have been caught, the incidents are hushed and smoothed over as quietly as possible.

That’s what makes what the Jersey Hooker crew did special: They self-reported. Before the fish was even out of the cockpit. No questions asked.

It’s good to see someone do the right thing … especially when you consider the bigeye they put on the scale weighed in at 130.2 pounds.

That leaves the Viking 52 in the lead with the 46.1-pound yellowfin it put on the scale just before 7 p.m. on Friday, pushing the Crazy Tuna’s 44.8-pounder from Day 1 into second place. The Viking 52 also took over third place with a 42.8-pound yellowfin. Those two tuna were the only fish weighed besides the bigeye on Friday from the 19 boats that fished.

The Viking 52 also hooked a blue marlin that its crew estimated was more than 300 pounds but released it rather than killing it because the tournament does not have a category for blues beyond releases.

As quiet as Friday was — beyond the sound of chatter and laughter under the tent, as families and crews gathered for dinner on a perfect summer evening — Saturday looks to be busy. The entire fleet is reportedly fishing Saturday, and clearly there are some fish around. How many will be caught is anyone’s guess, as crews are having to work hard to find them. But it should make for an interesting Saturday evening.

Check back here Sunday morning for the final take on the 44th annual White Marlin Invitational, and be sure to follow the Big Game Fishing Journal’s Facebook page  for live updates.

Variety continues to be the spice of life, or should I say fishing, on Barnegat Bay.  Blowfishing remains solid and fun times for the kids.  Speaking of blowfish, my youngest son Garrett and I were feature in the front page story on blowfishing in Friday's APP fishing section  (see Fun & Tasty  ).  The early week’s hot fluke bite cooled off a little after Thursday’s NE blow.  Saturday it did show some signs of rebound.  Good news is there are still some fluke deep in the bay. Sunday morning I landed a 21’ fat keeper on the west side while targeting weakfish.  Weakfish are in the bay now and looking back at the last 10 years of records I have kept this should be the week it blows open.  Ocean temperature has settled in the low to mid s 70’s while the bay went down about 8 or 9 degree to 75.

On the nature note side of things fall bird migration, both south and north (did I say north????) is underway and has been taking place for about a month now.  Adult shorebirds, such as several sandpipers species, are the first to head south.  They leave their young in areas such as the tundra to feed and grow up before heading south.  From a survival point of view it is not a bad plan in that the young do not have to compete with adults for the food supplies but trade off mom and dad’s protection.  Some species of birds, such as royal terns now in our area, undergo a post-breeding dispersion in which they venture north to feed before winter. Screaming drags, Capt. Alex LightHouseSportfishing.com

The back bay and inlet continued to produce extraordinary numbers of fluke this week, but there were signs of this fishery beginning to slow down by the weekend. We'll have to wait and see what the next few days bring.

As reported last time, we started the week on Sunday with regular George Selph banging well over 100 fluke including six that came home for dinner. Monday saw the vacationing Viggiano brothers (Chris, Mike, John and son in law Joe) landing an amazing 150-180 fluke up to 21" before heading in with the fish still biting. Wednesday I had Matt and Dan Kelleher aboard adding another 120+ to the count (including eight fat ones in the box) despite a slow start while we waited for the tide to change. But yesterday with George Selph back looking for a repeat performance the fish were either gone or had a serious case of lockjaw as only 15-18 fish were landed, all shorts. Was this a lingering effect of the strong northeast blow we had on Thursday or did the fish just move out? Hard to believe they all moved out that quickly, but only time will tell.
I had an unexpected cancellation for this Thursday (8/1) and still have a couple days open at the end of August for anyone looking to get in a summer trip.
Until next week.