Sunday, January 22, 2017: Clay mines in the mist. That was the gist of my Saturday, doing walkabouts in the fog.

A fun thing to try while stuck indoors during a storm. Uh, send me your videos.

Below: Yet another "Why it's a bad idea to let uncle babysit."

Below: From the Hall of Fame archives. Baby's very first "WTF?!"

Weather note: Batten down that hatches ... and be thankful it's mildish out. We will see winds to 50 and some of the famed minor coastal flooding. It's one of those oft-seen-a-year events. We are also in a forgiving astronomical tide period.

This storm will be yet another fast-mover. I'm sticking to the notion that storms are moving more swiftly than in years past. It all has to do with a highly animated atmoshere, egged on by lots going on up there. I know that's not very sciencey but it's all too real that the skies they are a changin'. While swifter storms might seem like an up-thing, the down tick comes with greater intensity, especially once the move of the coast.

We will see yet more unusual mildness once this system in gone; near 60s will show before a minor late-week cool down ... and then back to weirdly balmy.

Here's a look at my finding a section of the Union Clay Works, a lost town ... of sorts: http://www.youtube.com/watch?v=B-AGhodSmKo

A sense of how much in the middle of nowhere this place is.

Sunday, January 22, 2017: Clay mines in the mist. That was the gist of my Saturday, doing walkabouts in the fog.

I tracked down what I’m pretty sure was the main part of the Union Clay Works, what we used to call the Clay Mine.

(By the by, I’m not even remotely suggesting I’m the first to find this piece of Union Clay Works ruins. I’m just giving it a just-re-found feel. It was an unearthing for me.)

The site is southeast of Old Half Way, which is now mainly known as Hidden Lakes, especially by literally generations of partiers using the Old Half Way’s sands around the colorful-water quarry holes, all that remains from clay and gravel mining that took place there well over 125 years ago.

Below: Hidden Lakes, Old Half Way -- quite a distance from Union Clay Works. 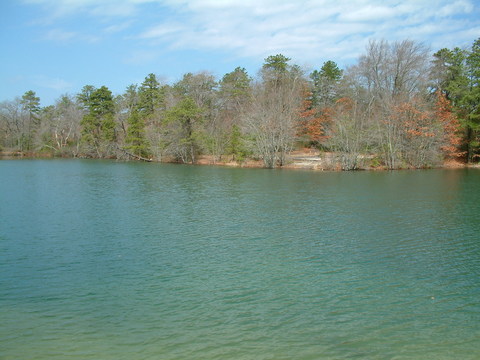 Just south of the likely Union Clay Works remains I came across, not more than 40 yards away, is a cellar hole that I’m betting housed the workers. It now has modernish debris in it but the hand-forged square nails scattered in the ground surface proves it’s much older, possibly back to the 1860s/70s.

About 100 yards further southeast of that, located on what’s called Clay Mine Road, is the barely-showing remains of a larger homestead, once holding a much larger dwelling.

When exploring other forges, glassworks and such, I’ve noticed the oft finer homes of managers or owners are somewhat near the work areas, though not so close as to be bothered by any din from the 24-hour work going on. This larger area of ruins near the Union Clay Mine seems to be a higher-up’s dwelling.

As I note in the main video, I have read a goodly number of historic interpretations that the Union Clay Works got their clay from Old Half Way. Having found no fewer than six deep depressions near the ruins I came upon yesterday, it’s obvious the immediate area of the works was once mined for something – deep down, such as clay. Admittedly, the cenote-shaped holes could also be water catches.

My video only shows one of the reject piles. Others are scattered in the area, as far as 100 yards away. It seems there was a lot of failures in the pipe-making realm.

Below: I was about to give up my search for union Clay when I saw this strangely round lichen. While photographing it, I came across a piece of brick that essentially directed me to old ruins. 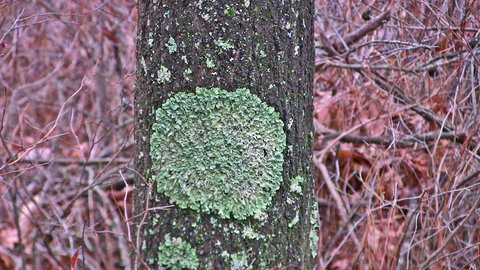 Follow-up: Below is a video of a small kiln in the Union Clay Works area. Despite being small in stature, it was surely vitally important back in the day. Where I said, in my first video, that I didn’t think the bricks I found at the Union Clay Mine ruins were part of output from the pipe works, I now think the bricks in the ruins area were still made on the premises, so to speak.

This small kiln looks like it could easily pop out bricks for personal use. Remember, these folks were top masons. They could make brick with their eyes closed – and sure as hell weren’t going to spend money buying them. Thusly, my video comment on the bricks has now been modified after pondering the smaller kiln.

Here’s a video of that kiln: http://www.youtube.com/watch?v=bnOmn-c41Gg&feature=youtu.be

Here’s one of a number of fine write-ups on the site.