Sunday, January 14, 2018: I’m working on a slew of non local things for my weekly column. That’s never a good sign for this blog. It means there’s squatola to talk abou

This cartoon is suddenly not so funny ... I have a Hawaii simile scare profile starting up further down. Give it a read. 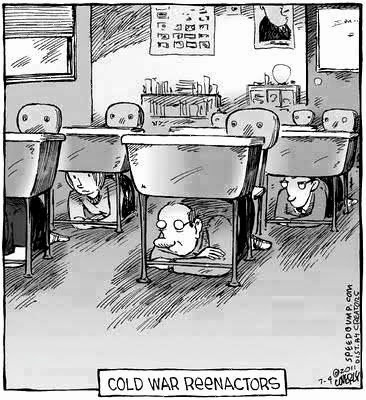 Imagine if they actually began doing it on purpose!? Had to show you this busted pipe photo (via Randy Brown), proving even nicer homes can have frozen hell break loose. 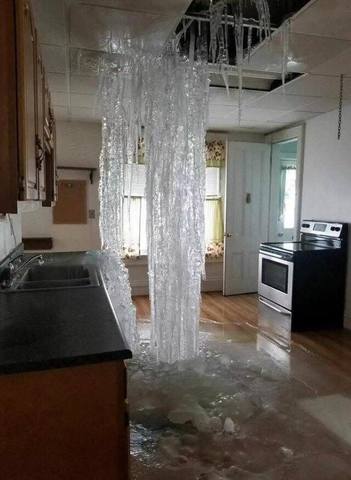 Sunday, January 14, 2018: I’m working on a slew of non local things for my weekly column. That’s never a good sign for this blog. It means there’s squatola to talk about in here, where I try to stay local to some degree. And since the degree won’t get above 30 today, I’m back to carving in the kitchen, literally. Even though I have a workroom for carvy projects, there’s something cozy and creative about laying out the kitchen table to make the likes of rigs and shell totems.

I need to mention that the beaches, including Holgate, are very shaky to drive upon. Not only is there freezing sand to break through higher up the beach but even when driving toward the wet sand near the water, it's sinky in spots ... suddenly. These sinkholes are totally unreadable ahead of time.

A couple snowy owls remain in the Holgate refuge area. With the melting of the snow, they'll be easier to spot.

Below, you’ll see where sea trout and stripers in the Chesapeake Bay area took a horrendous hit from thermal shock, supposedly brought on by water temps below normal.

Having become a conspiracy theorist about too many things, I have to question why thousands of Chesapeake bass died when the species can usually tolerate the cold. I might suspiciously guess that those bass had been enjoying some unnaturally warm water from some source or another, likely industry. The warm-water source disappeared. The fish were doomed due to an inability to quickly adjust to the plummeting water temps. This would mean someone was responsible for the die-off.

Sea trout, on the other hand, are known to perish in the cold water. They would succumb due to more natural processes. The photos I’ve seen of the DOA sea trout show they were, in fact, sea trout and not weakfish. s of speckled (or spotted) trout are turning up dead in Virginia waterways, after the recent stretch of freezing temperatures in the Bay.

The cold-stun event appears to be worst around the Lynnhaven Inlet and Little Creek.

Dr. Pat McGrath, a marine scientist at the Virginia Institute of Marine Science, tells Bay Bulletin that when the water temperature drops between about 41 and 44 degrees Fahrenheit for more than a day or two, speckled trout start to die. The Chesapeake Bay is already the northern border for the fish's population, so they are living at their thermal limit even when the Bay isn't gripped by cold for days on end.

Dr. McGrath, along with VIMS professor Eric Hilton, have been tagging and tracking speckled trout since 2016 to find out more about these cold-stun events. So far, 74 fish have been tagged, but Dr. McGrath says there is a good possibility that just about all of his tagged fish are now dead.

The VIMS researchers are finding that smaller speckled trout behave differently in cold weather than the larger speckled trout. Almost all of the fish under 14 inches leave the rivers when the water gets dangerously cold, heading to the mouth of the Bay or the ocean, where temperatures are more stable. But the larger fish do the opposite, and actually head up farther into the shallow parts of the rivers, hoping the shallower water and mud may help them warm up more quickly. But that's not usually the case: these larger fish are the ones that die.

Anglers despair when they see cold-stunned trout floating on the surface, because it usually means the recreational fishery won't be good in the coming year.

Dr. McGrath acknowledges the impact, saying, "The fall of 2018 is probably going to be a good year to take off from speckled trout fishing. Maybe...focus on rockfish next fall."

But, Dr. McGrath points out, all hope is not lost for future speckled trout fishing. The smaller fish, who leave the river and typically survive these cold water events, will continue to grow and thrive in the coming , and may make for a good season two years down the road.

North Carolina has also seen a high mortality rate this winter, and just announced it is suspending all speckled trout fishing until June 6th. Virginia hasn't imposed any limits of its own.

"I caught it from my boat in November of 2016 on a live bunker. At 22 1/4 lbs It is the biggest one I ever caught. It would have been even heavier if it had not spit up 3 adult bunker just before I gaffed it. The taxidermist had some problems with his Mom having cancer so the mount took a little longer than expected. I just got it a few days ago."

I’m gathering now-startling information on what was, initially, something of a laughable event in Hawaii. Yes, the pseudo end of the world, whereby the islands were told over assorted media outlets: Emergency Alert: “BALLISTIC MISSILE THREAT INBOUND TO HAWAII. SEEK IMMEDIATE SHELTER. THIS IS NOT A DRILL.”

For over half an hour, warnings repeatedly rang throughout the islands that the end might be closing in fast.

Evaluating a slew of reports, stand-in-place shock set in. Many folks were fully baffled about where, exactly, one takes shelter from a nuclear warhead aimed at a tiny, clustered group of islands.

I'm told that both tourists and residents just gathered together, in small groups -- a comfort-in-numbers sorta resolve. While it surely wasn't funny at the time, I'm trying to confirm the report of a fellow in one touristy group in Waikiki supposedly hoping to calm  others by saying “This missile is coming from North Korea, so it might not even get here … or it won’t blow up when it hits.” Hey, when that's all you got, it can sound decent ... in a grabbing-at-straws way.

Finally, after 38 minutes of escalating fear -- and with an odd air of “Just kidding,” -- a recant alert arrived. Commander David Benham, a spokesman for US Pacific Command would assure, "USPACOM has detected no ballistic missile threat to Hawaii," the statement read. "Earlier message was sent in error. State of Hawaii will send out a correction message as soon as possible."

It would soon be explained that the whole thing was a wee little, button-pressing error by a worker.

As the Washington Post reported, “Around 8:05 a.m., the Hawaii emergency employee initiated the internal test, according to a timeline released by the state. From a drop-down menu on a computer program, he saw two options: ‘Test missile alert’ and ‘Missile alert.’ He was supposed to choose the former; as much of the world now knows, he chose the latter, an initiation of a real-life missile alert.

In retrospect, one of the most dangerous ramifications of the alert had to do with motorists on fast-moving highways. Many drivers dutifully followed the advice of the initial advisory, which commanded, “If you are driving, pull safely to the side of the road and seek shelter in a building or lay on the floor.”

I got word about military bases – and Hawaii has many – going on full red alert, not knowing any more about the attack than the public sector. By the by, such a state, in military readiness terms is called DEFCON 1. "DEFCON 1: Maximum readiness; all forces ready for combat; nuclear war imminent or likely." You never want to hear things are DEFCON 1 -- just ask many a Hawaiian.

Per a Hawaiian friend, Kathy C, “It is a blessing that it was a mistake, but I am goddamn pissed off at the major incompetency! … Sitting in the tiny bathroom for 30 minutes with the family and the dog waiting for the bomb to hit was beyond horrifying...No tears, no panic, just a sort of resigned acceptance with a pounding heart.”

Per another (Maui) college friend, Viki Marugg, “More than half of my remaining family, and a multitude of friends live on five of the seven bigger, human-inhabited islands. The relief was so great when the ‘all clear’ sounded, a huge burst of delight-in-life broke out everywhere. The humor began flying... but beneath it all one can clearly hear deep anger.”

I hear it will take some time to determine if any Hawaiian residents went more morbidly preemptive, deciding to end it before being incinerated. Please, no!

Here's an interesting Facebook exchange twixt friends of mine:

Scott Mazzella: I don't believe for a second it only took one person to push the wrong button. The timing! CDC was already preparing public lessons on "what-to-do" in a nuclear threat. I bet this was an exercise. An exercise you could only pull off if no one realized it was an exercise. It gauges human and system reactions in real time. Maybe it's the conspiracist in me, but yesterday's nonsense just doesn't seem legit.

Viki Marugg: I completely agree with you, Scott. As does my politically-astute younger sister, a resident of the Big Island. I worry that this was a covert exercise in furthering the Shock Doctrine tactics. Even the person who initiated it could be a completely clueless pawn. But the effect for Hawai'i and its "extended family" on the mainland was absolute terror. How handy is that for a little mass mind-control. And Hawai'i is a near perfect petri dish. Isolated... not too big... not too small... as Goldilocks once said: "Just right!"

Within hours of the horrible scare, the Hawaiian spirit shone through, as this shirt quickly went on sale: 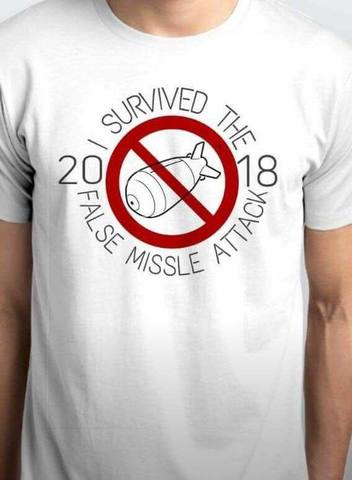 (I'm getting a load of news stuff in from Hawaii folks. I'll either use it in this blog or in my weekly column.)

A mantis shrimp find. I've eaten them after nabbing a couple from near Double Creek mouth, High Bar Harbor. I got them using a snag jig dragged on the bottom. I wasn't sure about dining on them, so I took just the tiniest taste after cooking in Bay Seasoning. Yowza! Scrumptious!

Can someone tell me what this is my husband got it in the bay today?

Please remove the last pic of our Native Americans.......distasteful.