Sunday, January 03, 2016: Well, things should be getting back to normal … as it gets abnormally cold, at least by this year’s sky standards.

Might need someone to cozy up to with the temps we'll soon be getting ...

For hunters opposed to over-coldness ... 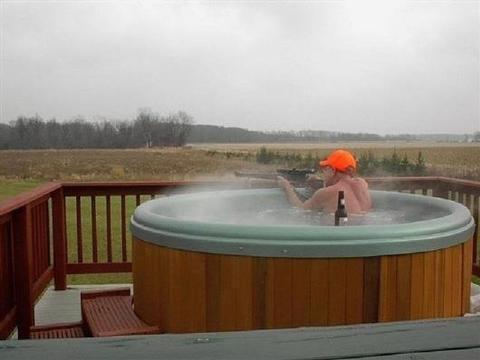 Sunday, January 03, 2016: Well, things should be getting back to normal … as it gets abnormally cold, at least by this year’s sky standards.

As you know, we’re about to get chilled to the bone. We’ll even dip to the teens on LBI.

Yes, those lows are laughable unimpressive compared to last year, when we went single-digits long enough to freeze the bay from shore to shore – for weeks on end. But the arriving coldness will be akin to concepts like wind-chills and heat indexes. Since our bodies have grown accustomed to this all-time record warm winter we'll be feeling a thermal shock factor. You've likely heard that comment from Alaska: It's not the cold that will kill you it's not being ready for it.

Well, we’re just not ready to take on single-digit wind-chills. And I’ll be leading the not-ready pack. Hell, only yesterday I finally turned off my outside shower. This famed cold-is-a’comin’ ritual is usually performed in October or November at the latest. Not this weird year.

I’m actually dreading the downward spiraling degrees before they’ve even dropped. I’m also even a bit pissed -- despite my overall utter thankfulness for the mildest early-winter since the deglaciation of northern NJ. Still, why did the cold have to move in for the final days of my friggin' vacation? What’s more, wait until you see the rebound in temps following this freeze; try 50s and maybe touching 60 -- as I have to return to my job.

Anyway, this nosedive in climate will likely bump the bass out to sea or drive them southward. Of course, we also have some overwintering stripers that hole-up inside the Barnegat Bay and, more so, up the Mullica.

I often talk about a seeming local stock of overwintering bass near the 113 channel marker, bayside, west of Holgate. I have taken bass there in January, when there were ice blocks bouncing around, as I kayaked, jigging.

Of note, one of those Januarys, I also scored loads of hake/ling in the frigidity, while paddling just off the oceanside beach (Brant Beach) using small baits on pompano rigs. I was in maybe 25 to 30 feet of water. I also tried surfcasting for them, knowing for certain they were out there. I could almost cast to where I caught them kayaking. Nary a touch. Then, got back into the yak, paddled out, and into another slew of them. To be sure, that mugging action wasn’t a done-deal every time out, though I’d usually get at least one of two even on slower days.

I wrote about those "hake" fishing trips and someone suggested those coldwater fish might have been whiting, technically Merlangius merlangus. While I was pretty sure they were red hake, Urophycis chuss, I’m not as sure, now thinking back – and knowing red hake usually move out to sea in the winter.

FROST FISH DAZE: This is a prime time to offer a “frost fish” recall, a winter fishery once brought to you by whiting. Bitter-weather whiting were famed for presenting both a surfcasting bite in the worst of winters. They were doubly famed for occasionally being driven onto the beach by predators of one coldblooded sort or another – though seals and whales could also panic them onto the midwinter beach.

Once out of water, stranded whiting would quickly succumb to below-freezing air temps and go rock-hard. Folks would bundle up and rush the fish-covered beach, loading up on what amounted to a naturally frozen seafood. Some way-back accounts even talk of the whiting wash-ups as being lifesavers when supplies were running low, with winters being too deep and fierce to re-up on many items.

Whiting have a great flavor when baked and become a classic gourmet delight when dried. Interestingly, well within recent memory, whiting was once one of the cheapest fish at the market. As of today, delectable dried whiting is pushing over $10 a pound. Go check. 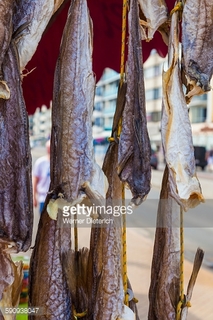 So where did all the whiting go, considering they were so plentiful they would come a-beach by the tens of thousands?  I’ve been researching. There are the prototypical blame-guesses aimed at overfishing and environmental degradation. In chatrooms, many folks offer the old ‘cyclical” thing. That’s possible.

I’ll also offer a possibility somewhat in line with overfishing and an environment-based decline in the planet’s overall fish biomass. There might be more than a few species that became “frostfish.” I could easily see plentiful red hake being forced ashore, based on the numbers I caught during a couple winter. A little further north, tomcod was a “frostfish” species. Since virtually all bottom species are hitting rock bottom, quality-wise, it might very well be there is not enough of a healthy overflow of any species to where they can be chased ashore, en mass.

(Does anyone have photos of frost fish days on LBI or anywhere in NJ?)

Guess I was dreaming up a red head last night...

Below: This is not an advert. I accept none. I juts think this is a coolly "green" item for modern outdoors folks. Not a bad day! We stayed local and had a Boat Limit.