Sunday, August 28, 2016: Just another sweet day; bunker die-off is not worth causing stink over

New Jersey holds its own ... kinda.

After a rash of thefts of chained up bikes, Patrolman Majors has his suspicions upon sighting this ...

Sunday, August 28, 2016: Just another sweet day. I guess somebody out there might argue but this summer has been chockful of fineness, speaking from a touristy angle – something I’d love to be someday. I almost can’t imagine being on this Island without being haunted by work demons.

Today was a great beach activities day – except not so much for surfcasters. The light to moderate east winds added some oomph to already swell-roughened surf conditions, especially as the day went on. Midday high tides offered some workable near-in water but then came the obligatory onshore wind eel grass. I went in for some dips. Calling it mid-70s by feel alone.

As you might know, the tropics might be popping out a small cyclone that could get close enough in to skirt the Outer Banks this coming week. Not uncommonly, it’s a question of how quickly a cold front pushes across the country and drives the system out to sea. I hate to jinx it for waveriders, but I think there will surely be some decent ground swells from the storm, though I never like new moons for enhancing swells. We shall see.

The fluke fishing remains semi-insane. And that jumbo-size thing remains in place, as you’ll see further below. Sadly, the surfcasting for fluke is there but small, real small. I’m still betting the Holgate Rip, once we can get down there, will have some welcome doormats waiting.

SWEET STINK: The big stink this weekend is over the huge bunker die-off in the backbay regions of Little Egg Harbor. Fears and concerns of pollution ran rampant. All for naught. 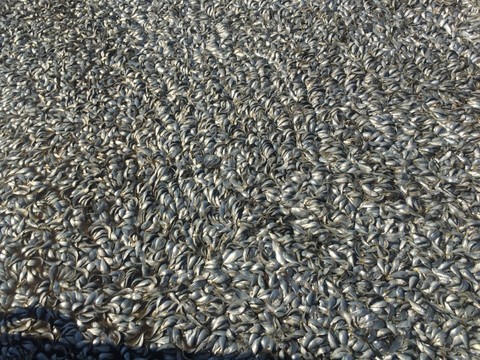 Any baby bunker die-off can have a silver lining, albeit rotten. This one was unusually silvery, considering all the fish involved – admittedly thousands of them -- were healthy as all get-out, short of that being dead angle.

I’m betting they died after being driven into shallows – or lagoon ends -- by predators. But the fact those predators might be highly-desirable gamefish fattening up for fall actually has nothing to do with the precious metal side of die-offs like this.

The die-off is part and parcel to an astounding, almost unprecedented, crop of bunkies in Barnegat Bay area this year. The showing of young-of-year bunker has been the talk of many a bayside walk. As recently as last week, I got yet another knowledgeable report of baby bunker so thick in the west bay you could hear them sucking air at night.

It’s simple math – and inevitable mortality. With so many bunkies in the system, there’s no avoiding forage scenarios during which they pack in so thickly they literally suck all the dissolved oxygen (DO) out of the water.

Most often, they get essentially herded into watery dead-ends or unforgiving shallows while mass-fleeing from things that go bite in the night, which is most likely the timeframe these die-offs took place.

A school of oxygen-starved bunker I’m excluding thermal shock, a common culprit in die-offs, since we really haven’t been all that baking hot of late. That said, even the current near-normal 80-degree bay water is already low in dissolved oxygen.

Regardless of the DO levels in the water, a school of baby bunker, especially when packed in like sardines, can empty every last DO molecule in short order.

The species, due to its jacked up metabolism, has one of highest DO demands in the business. They’re veritable DO hogs. Try keeping even a handful of baby bunker alive in a five-gallon bucket filled with high-DO sea water. They go belly up in a heartbeat. A single, large bunker in a bucket of fresh ocean water can go through the dissolved oxygen—and flat line -- in nothing flat.

While there is a mighty mess to clean up in Little Egg – nothing stinks like a dead bunker, hand’s down -- the total loss of bunkies to these die-offs is microscopic compared to the number of them that have side-stepped attackers.

There could definitely be more die-offs due to huge bunkie numbers and a powerful bayside showing of some significant outside contributors to die-off, like sharks.

By the by, the dropping of bay water temps acts to spike the bay bunker into heading west – then out the inlets. We really don’t have any chilly nights on the horizon. What’s more, even when bayside water temps go south, bunkies have been known to hang strong in back-bay channels and lagoons, far after the likes of spearing and mullet have migrated on.

Below: Menhaden from above. They're in a defensive pattern, which means something is shagging them, possibly commercial boats. Below: ; In this case, the bunker are more concerned about the great white than the fishing boat near the shark. 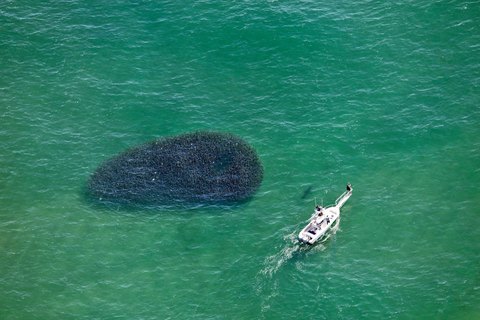 Beautiful day yesterday and although our fishing was slow our keepers were QUALITY!

Caught my New PB yesterday . We got in too late to get an official weight yesterday but this morning it tipped the scale to 10lb-7oz 29"
It was a team effort and couldn't have accomplished this massive personal feat without nick Alfonse and mark jovic! I've been showing video and photos for decades showing the bass traveling under the blues...here's a lot of blues and one bass. Two dives later I founder the big girls 15' deeper. 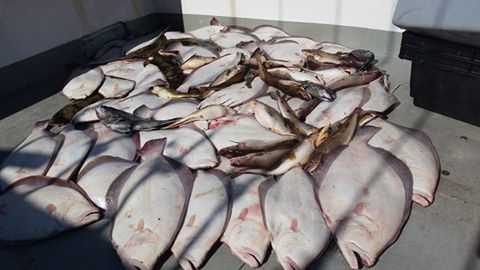 Fish Monger II Sun 8/28 Fluke Limit (12 man+) to 7.25 lbs - Few nibbles forRob Rommel and crew. Patience was the word of the day. Knew there was a load of quality fish in the area just had to poke around to find a whole load of em... picked away in the process at all quality fish n then we came across a big pile of em and it was game on filling the box. Mutiple fish on at a time n Mostly 3-5lbers... All kinds of limits and orl's . Dennis Muhlenforth hh with 9 keepers . Limits + for most except Joe Zagorski who broke he rod n his mojo. Fun day and a big box of 60+ keepers 2 biggest over 7lbs mess of ling and a few seabass. No spearing no killies...Jigs n gulp get it done again!!!! Thank guys!!!

This famed look-back is performed in many ways and places ... 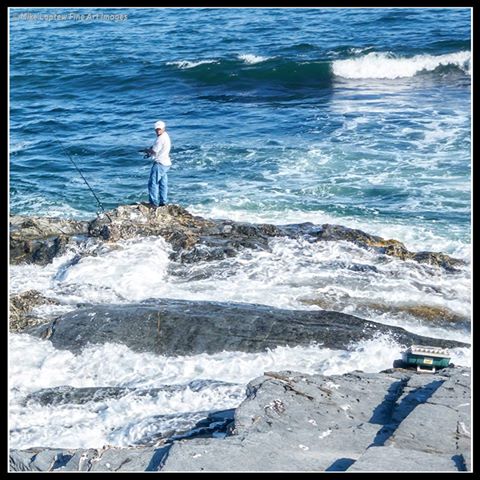 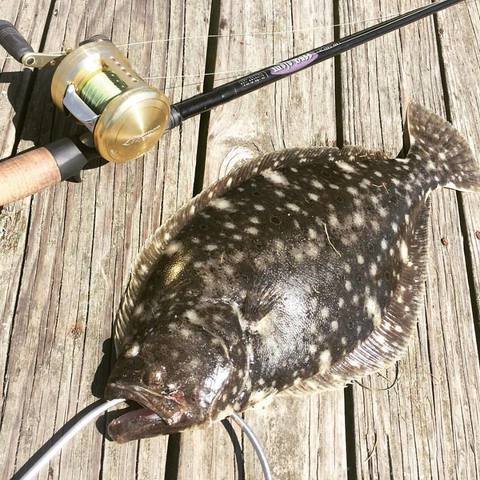 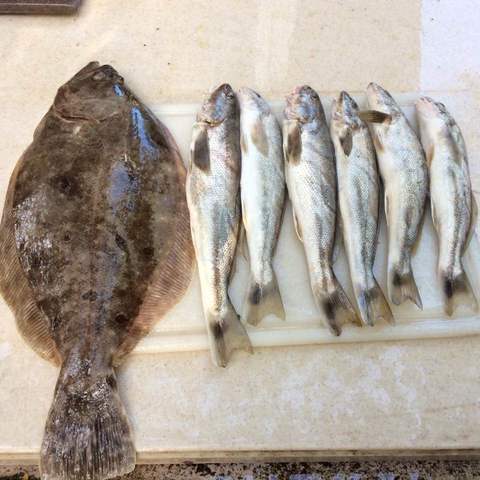 
A big thank you goes out to Andreas C Prinz IV for putting together a fantastic fishing trip on the Miss Beach Haven. Also a great job by Captain Brantley Whittaker for putting us on the fish. Lots of shorts caught and five keepers. Lots of fun had by all!

If anyone is looking for a great charter boat on Long Beach Island, the Miss Beach Haven is a must. Captain Brant will go out of his way to put you on the fish! 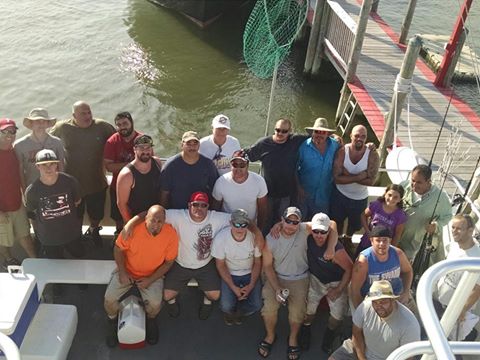 Wife and I took a ride down to Belmar Boat Basin behind Shark River Saturday afternoon to check things out.I saw several big schools of 4" peanuts passing by me and helped a young fellow catch some minnows with his trap for snappers.Talked to a couple of people who said they had caught a few short flounder and some snapper blues about 6". Saw something unusual ,a large pink worm about 7" long swimming near the surface for a little bit before a school of  large spearing attacked it .Looked almost like a blood worm from where I stood. I have never seen so many peanuts around this area as this season.