So, do we have to stop for this biker when he wants to get across the Boulevard ... after all, he is on foot?

This week's "Why you shouldn't let uncles babysit:

It seems the US Fish and Wildlife Service has mildly capitulated to at least pondering a “one time” dredging. It would be a good faith effort to see what, if any, impacts a channel dredging might have on the adjacent Forsythe Refuge lands on Little Beach and, mainly, Holgate.

Things get a little more nebulous when pondering the placement of the one-time dredge material. The material is still likely headed for the Holgate beaches but with the consideration of a terminal groin entering the picture.

While the dredging and the groin are technically -- and legally -- different projects, there could be an obvious interplay twixt the two, which makes sense.

By the by, one of the terminal groin questions has to do with its long-term maintenance. Apparently, groins can go wrong, i.e. eventually needing repairs or rock tweaks. Is the state ready for that commitment, long-term? Could there be any federal interaction with the state, even though the USACE is committed to steering clear of groin-building, much less marrying into one for the long run?

I also got an update on the next replenishment coming to LBI.  It’s soon to be scheduled; make that roughly scheduled.

The last day for project bids is September 15th. Four companies are always in the bidding/running. I’ll strongly conjecture a return of Great Lakes, which is also in-line to do Brigantine, meaning a proximity benefit to lining up the LBI work.

As to when the work will take place, that’s where it can get rough pinning things down. Part of the contract includes a rather large work window. The work must be completed by next spring (April-ish, 2018). One would imagine it behooves the winning bidder to get things underway in a timely fashion, as opposed to taunting the deadline clock. Of course, should the contractor have to delay work on LBI, maybe for timelier fixes, that’s the benefits of the rather large work window.

Once the contract is awarded, it might be easier to get a feel for when work might begin.

By the by, here’s the Army Corps official word on the upcoming work.

“USACE is moving forward with potential repair work for the three sections of the project that were constructed prior to Hurricane Sandy: Harvey Cedars, Surf City and a section of Brant Beach in Long Beach Township. This work could take place in the fall 2017 time frame.”

While that sounds a tad iffy, via that “potential repair work,” I have it on good authority that it’s a go. i.e. the aforementioned bidding process is a pretty good indicator.

Onward to other things.

The ocean remains riled from a steady onshore flow – and set to remain even more onshore. There are SCAs flying, with some 30 mph gusts being forecast, though I’ll bet it doesn’t get quite that gusty.

We’re in a rather stanch – and unusual -- north-based wind pattern; unusual for summer, be it late summer or not. While there’s minimal moisture involved, the feel out there will be coolish, almost blanket level at night.

Bayside fishing has shown just how many small fluke are in the bay, mainly near inlets.

Bayside is also harboring loads of snappers – of the smallest kind.

I hear some folks saying "I thought the Island replenishment was completed. Indeed, it was ... in an initial way. Below is the official Army Corps chart. BUT, note the "Target Completion Date." 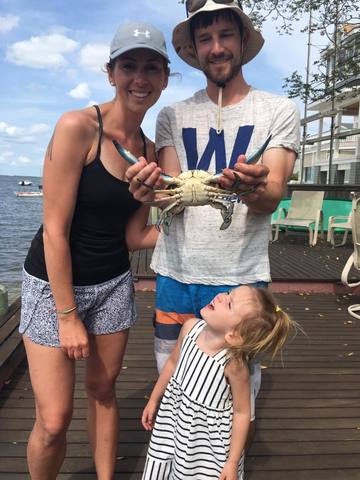 Croaker, Just a couple so far.

Had a nice inshore trip today with fluke up to 5lbs. Missed our four person limit by three. We've got some fluke candy in the live well for tomorrow's trip.

After the weekend’s upwelling, the ocean water temperature rebounded into the mid-70s. Then another hard south wind mid-week dropped the ocean water temperature coming over the North Jetty to 66. And once again the bluefish responded. Wednesday morning it was pure chaos for almost two hours with bluefish ranging from 2 to 8 pounds for the Doug Frey party. I was not able to get a confirmation ID on the bait the blues were hammering, but I think it might have been Threadfin Herring. Threadfin herring are also known as greenbacks down in Florida and are used as live bait for a wide variety of fish such as tarpon, snook, and sailfish. They do swim up to NJ some years, but most years they don’t. Oh, and if you think $3.50 for a live spot is expensive you don’t know what expensive live bait is. A dozen live threadfin herring in Florida will set you back a mere $50. Speaking of live bait, I love this time of year as I can usually have my live well packed before my clients step on board the Debbie M. My new motto is “don’t work for your fish, let your fish work for you”. And this morning I did exactly that when my live bait worked to put a 26” 7.03 lb. fluke in my cooler. Oops, almost forgot to mention the 40.36 lb. cownose ray that was landed during yesterday’s trips. Not sure how long it took to land the ray, other than more than 10 minutes on a 10 lb. spinning outfit. Get this, the ray fell for a white BKD. 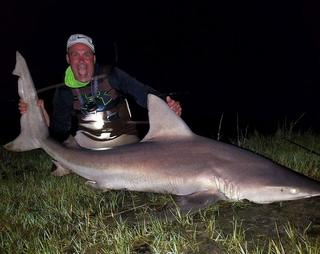 After a busy day at Harbour Island Marina the winning marlin was brought in by the crew of the Wire Nut. Produced by Ralph Musthaler

For a second consecutive year, polygraphs are the hot topic surrounding the White Marlin Open just two weeks after the tournament’s conclusion.

Tournament founder Jim Motsko confirmed that an angler who won prize money in the 44th annual competition failed a polygraph after the tournament's conclusion. Officials would not release the boat or angler involved in the testing.

The White Marlin Open’s rulebook states any angler who wins $50,000 or more may be required at the discretion of tournament directors to take and pass a polygraph. Tests are administered by polygraph examiners, not tournament officials.

The angler who failed opted to take a second test from a different organization offered by the White Marlin Open. Officials were given the results Friday morning, but have yet to disclose the findings.

Another unknown angler, also a prize winner, was tested Friday after his first test was inconclusive. These results were also withheld.

Stevensville, Maryland, native Glen Frost claimed the top prize in the tournament, claiming $1.6 million for his catch of a 95.5-pound white marlin. It is unclear which anglers received a second polygraph; however, the White Marlin Open, when asked Aug. 18, said “(Frost) did not fail his polygraph."


The crew of the Wire Nut poses for a photo with their 95.5 pound marlin during the White Marlin Open at Harbour Island Marina in Ocean City on Friday, Aug. 11, 2017. (Photo: Staff photo by Ralph Musthaler)

Other winners eligible for testing include Mike Donohue of the Griffin and Joe Andrews of M.R. Ducks in the white marlin division; Joe Sadler of the Intents, Jim Boynton of the Blue Runner and Kris Rainear of the Warden Pass in the tuna category; and Andrew Cohen of the Silly Money in the dolphin division.

Coming into the 2017 competition, polygraph testing was a familiar issue for the world’s largest billfish tournament.

Phil Heasley, the winner of the 2016 White Marlin Open, failed his polygraph following the catch of his first-place 76.5-pound white marlin. At the time, Heasley was set to earn $2.8 million.

The issue was taken to federal court, where Judge Richard D. Bennett concluded Heasley and his crew members aboard the Kallianassa violated tournament rules, a ruling that resulting in the withholding of prize money.

Heasley later appealed the judge’s ruling, but he is required to pay a fee of nearly $282,000 for the judge to hear the appeal.

Chris Sullivan, an attorney who represented Heasley throughout the trial, issued the following statement Friday afternoon regarding the news of the failed polygraph.

The Kallianassa doesn’t delight at anyone’s misfortune. We’re saddened to hear that yet again there is a controversy surrounding polygraphs and the White Marlin Open. As we’ve learned throughout our yearlong involvement, polygraphs are unreliable — even when conducted to standards the polygraph examiners set for themselves. We had hoped that the White Marlin Open would have learned this lesson as well and eliminated polygraphs from its competition. Polygraphs have no place in our society, be it in government hiring or in fishing.

We do not know the details of this year's issues, so we cannot comment on the particulars. However, we believe the White Marlin Open could have prevented this if they had only listened to us last year and let us present our evidence, including eyewitnesses, rather than take us to court. We will be monitoring this situation with intense scrutiny. In conclusion, we send our sympathies to all honorable fishermen. You don’t win a contest by winning a polygraph — or a court case. You win it by catching a fish fairly.