Below: A creature of habit, Chenille wasn't going to let anything interfere with her daily breakdancing practices ...

Below: Back in the day, times in women's track meets were often predicated on air resistance ... Sunday, April 23, 2017: Uplifting showing of the documentary Ocean Frontiers III; Ocean Stewardship & the New Blue Economy in Ship Bottom yesterday evening. The turn-out was maxxed out, which is great! It shows how many folks don’t just live the coastal/seaside lifestyle but also want to understand and be part of how the oceans are managed. 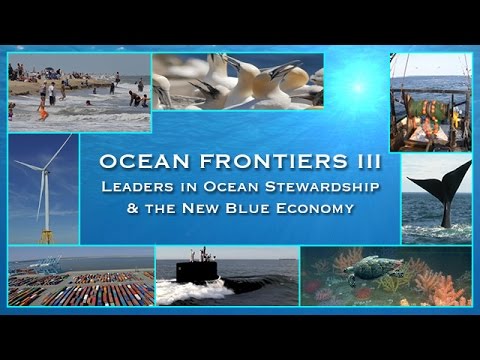 The 55-minute video highlighted the nation’s first-ever regional ocean plans in the Northeast and Mid-Atlantic. The great part about this plan is the absence of heavy-handed legislation or overburdening restrictions. That’s not the plan’s plan. It is primarily a way to monitor and track ocean usages, for both professionals and laymen alike. Far from fostering abandonism, it instead offers is a template of informed a conservational coastal existence – closer to a coexistence with the ocean.

Ocean Frontiers III will likely be reshown nearby this summer. Take it in.

It was a proper follow-up that reports of whales and blues in the LBI surf and inlets greeted me at work this a.m. The regional plan hyped in Ocean Frontiers III includes monitoring and making available real-time data on whales and fisheries – and a ton of other oceanic things, including shipping lane activity and the activities of commercial fishing boats.

As to the spotted whale, I can guarantee there will be a slew more to marvel at in weeks and even month to come. I suggest hooking up with one of the boats that routinely go out whale watching. Those captains know how to locate the leviathans and also know the strict laws governing cruising anywhere near the protected marine mammals. I’m steadily asked by the likes of the Brigantine Marine Mammal Stranding Center to remind all captains, especially those in control of smaller vessels -- including manually-powered vessels, like kayaks and stand-up paddle boards -- that it is illegal to even force a whale off its heading by being too close to it. I’m told that citations have been given for disobeying this steer-clear mandate by obviously chasing after whales.

Below: of course, should whales find you fascinating to follow, that's their prerogative. 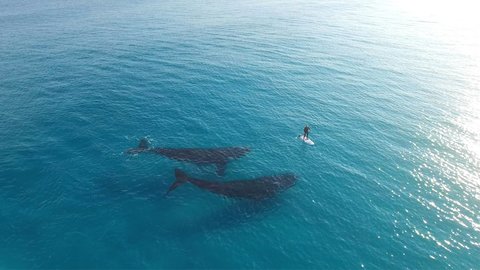 Blues are still around with some super-slammers mixed in, though it's astounding the size range -- from a couple pounds to well into the teens. Surf stripers are running small to very small. "Jay, Finally got into some small bass. Really small bass. Got them on jigs. They were medium fatness. If I sewed tow of them together I might have had a keeper. ..." Clams on pompano rigs with red floats are working well.

Fishing crazy day with the blues 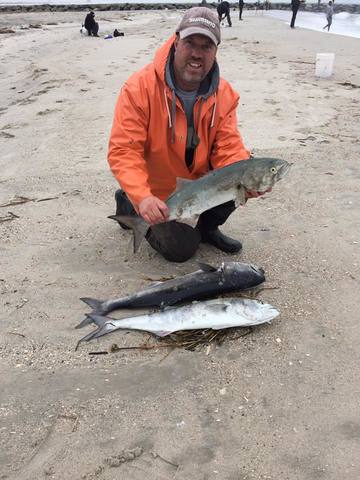 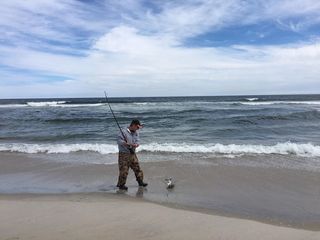 First blue of the year! Thank u fishing gods! 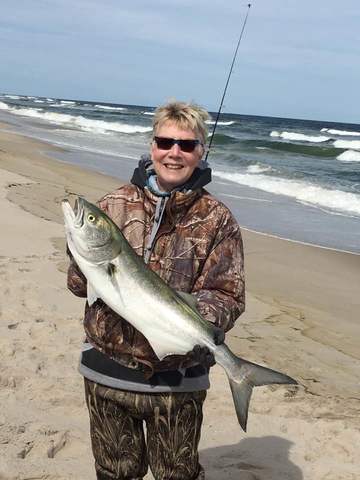 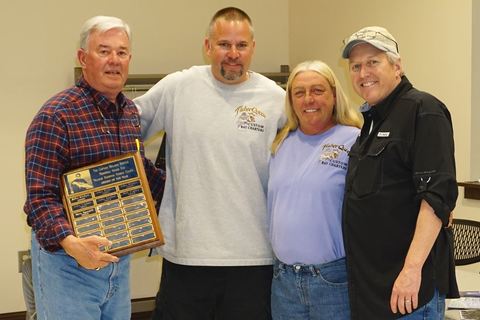 Fun day on the water with the kiddos! Nice catch, William and Alena! 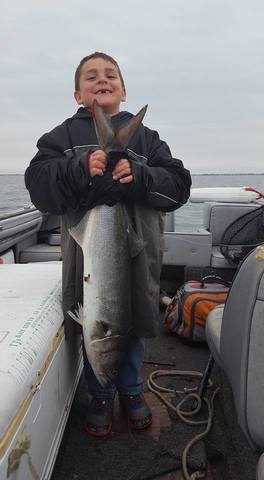 Found the length today just not the right girth epic fishing to say the least went mental for a little while with plugs love this time of the year been putting a lot of time in for a 20#+ just gotta keep at it. 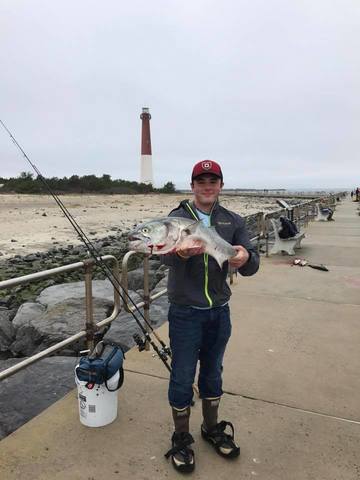 My first bull on spinning tackle My buddy just now on a bunker chunk 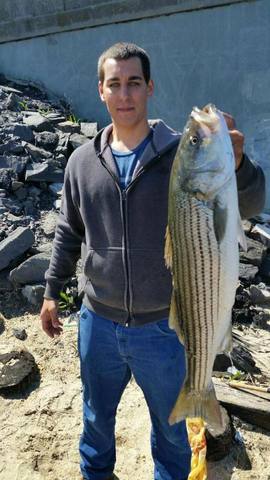 Fish Monger II Sun 4/23 Blackfish to 11lbs - Was hoping they would have the feed bag on with a charter of sharp toggers but it was just back to a rough grind... tons of current made it hard to work the pieces and bites were only in small areas of the boat. Would anchor up get a couple keepers than that would b it so we did a lot of bouncing around to scrape up what we could. Managed 25 keepers and 2 cod n 2 flounder as a bonus. Wasn't easy n put in a long day but to scrape up what we could. Congrats to Joe Murray who had his limit and 2 nice fish at 11+ on our last overtime drop and 8.5 as a kicker. 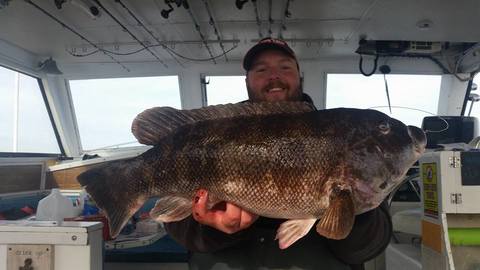 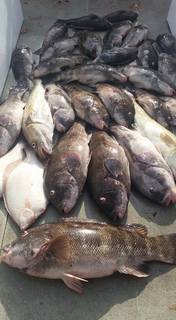 New ZGlide 6" hardwood (3.5oz.) slow sink. Get one at
www.mikescustomplugs.com 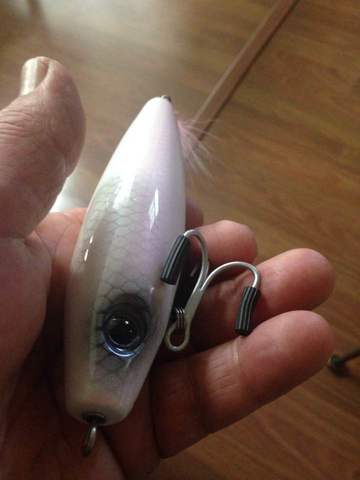 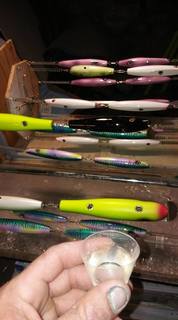 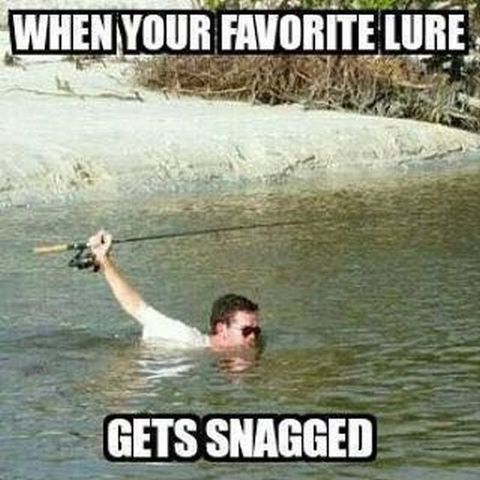 
Species 411 the Fantail Darter Darters are so cool and not easy to catch which makes them both exciting and frustrating at the same time! 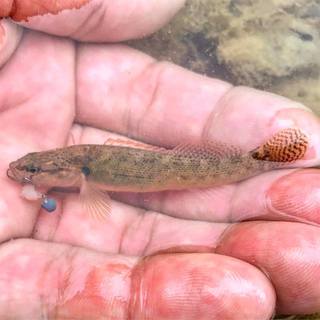 While it may seem obvious that a good hike through a forest or up a mountain can cleanse your mind, body, and soul, science is now discovering that hiking can…