Say hello to my little friends ...

I do sheer cliff climbing right here in Ocean County:

Oddly, that means the same thing, in a way. There’ll be tons of roses, which really rock after bitter winters and wet springs, and, also, there will be tons of ticks, unlike last spring and summer when the ticks took a bizarre hiatus.

Actually, the ticks are already getting insanely grabby. So far this spring, I’ve been poked three different times by deer ticks. That equals my entire embedded tick count for damn near the last ten years. Part of that invasiveness could be the fact I’ve been in Barnegat more lately, where the deer are so plentiful you can cross entire fields by jumping from one deer back to the next. Just to further endorse your conviction to no longer go onto non-asphalted places, all three of my recent bites, post removal, have gone gonzo-looking. The removal spots have all developed a large blood-blister look. I’ve never seen such a look over decades of nonstop woodsing. Something is in their anticoagulant that means business. Peculiarly, there is no pain or itch, despite the sites looking inflamed. In most tick bite instances, the area itches like the dickens.

Below: This is a bit like my bite but far smaller -- and mine didn't have as much red around it. While the aftereffects of these bites seem to be all show, I’ve been sitting around waiting for some of these new tick-bite maladies to set in. You’ve surely heard of latest severe flu-like symptoms following some tick bites, not to mention death-like symptoms following bites by ticks infected with the Powassan virus. If I by-step those, I can always be on the lookout for tick-bite maladies like babesiosis, ehrlichiosis and anaplasmosis, Lyme disease, relapsing fever, Rocky Mountain spotted fever, and tularemia.

Below: Some POW info:

Powassan (POW) virus is transmitted to humans by infected ticks. Approximately 60 cases of POW virus disease were reported in the United States over the past 10 years. Most cases have occurred in the Northeast and Great Lakes region. Signs and symptoms of infection can include fever, headache, vomiting, weakness, confusion, seizures, and memory loss. Long-term neurologic problems may occur. There is no specific treatment, but people with severe POW virus illnesses often need to be hospitalized to receive respiratory support, intravenous fluids, or medications to reduce swelling in the brain.

You can reduce your risk of being infected with POW virus by using tick repellents, wearing long sleeves and pants, avoiding bushy and wooded areas, and doing thorough tick checks after spending time outdoors. If you think you or a family member may have POW virus disease, it is important to consult your healthcare provider.

See, I told you I’d reinforce your conviction to go woods-free for the rest of your lives. As to fishing, Graveling has been great. I got that from some guys looking to me for bloodworms – or even the heads of tapeworms. The thick (hook-able) part of tapeworms are great bait, though they are best used when tied on -- along with being hooked.

I thought I’d include a Scott B&T report, which I traditionally do when he gets his first weigh-in of the year. There is also a mention of black drum, which are also showing near LE Inlet.

Scott’s report: “We have had multiple customers coming in this morning saying how great the fishing has been. All week anglers have catching been a lot of short stripers from Graveling Point and Pebble Beach which are at the end of the Radio Road in Little Egg Harbor Township. The shorts are ranging from 14 to 27 inches and a couple of just barely keepers have been caught too. Jake Adair finally weighed in our first keeper striper on Monday which was six days earlier then last year. Next reward is for the first blue fish to be caught from land at either Graveling Point or Pebble Beach to be weighed in here and that is also for a $100 gift certificate.

“The first Black drum fish was caught last night a Pebble Beach. We did not get a weigh-in, but several customers told us that the Black Drum was about 25 pounds. Earlier this morning, another angler tried to drag another good size Black Drum up onto Graveling Point and broke his line. There were Black Drum fish weighed in over at the Absecon Sportsman center too. Big Drum Fish in the area means use caution and secure those surf rods because bigger fish like those drum will drag the gear right on into the water.” 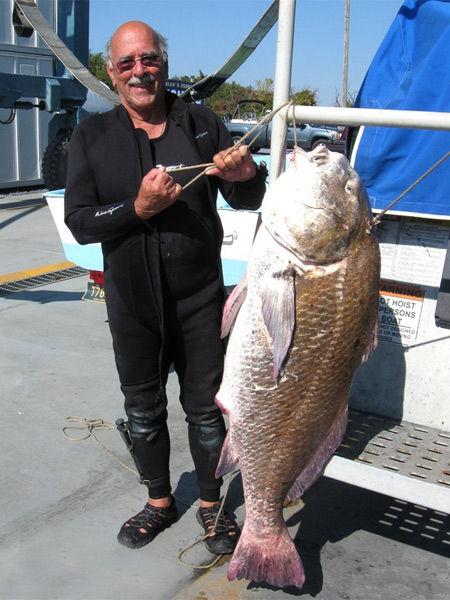 The black drum news is very uplifting, since we had a couple down years on these big bruisers. Like stripers, the female drum are the biggies. Seeing we’re a bit early on their showing this thickly, we could have a month of wild clam chucking in Little Egg.

You know drumming is hot when the fish come into the LBI surf line. I’ll keep an eye pen for that.

Expectedly, black drum tend to munch longer on bunker pieces. Angler patience is needed after first feeling minor line bumps as the bunker is mouthed. When using clam baits, the drum scarf them down and quickly move on; that pick-up manifests as one of those rod bends that just steadily keeps increasing and increasing – followed by an unscheduled rod/reel flight if the drag is battened down too tightly.

Circle hooks are perfect for black drum. Those hooks not only find meat quickly due to the mouth shape of drumfish but allow for clean releases, as many as 80 percent of drum being let go this time of year … to allow  them to spawn. 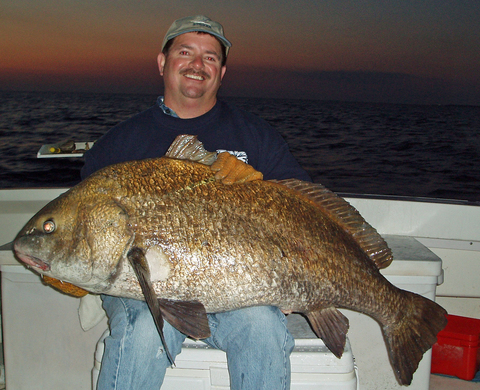 Here’s a good black drum read for Onshore-Offshore magazine/website. “The Black Drum (Pogonias cromis) is similar to its cousin, the Red Drum. Most specimens are generally in the 5 to 30lb range. The black drum is known as the largest of all the drum families with some reaching more than 90lbs and four feet in length. Juvenile fish have distinctive dark stripes over a gray body and often can be mistaken for sheepshead. The world record black drum was just over 113lbs. It is recommended that black drum over 15lbs pounds be released, as the flesh is very coarse and tough. Black drum are capable of producing tones between 100 Hz and 500 Hz when performing mating calls.”

As I often note, on a calm day it is very easy to hear black drum fish clunking under a boat, albeit frustrating when you can hear a train of them without getting so much as a touch on bait. The reason is sorta simple. The noisy males do not have meat/clams on their minds, short of some tail to come via the ladies. They are often in a competitive mode. The gal drums – along with the clueless smaller males -- are more aggressive when it comes to eating on the way to spawns.

Drum, or more specifically Black Drum, are the largest inshore fish in our state waters and often exceed 70 pounds. They have recently been reported as far north as the Sandy Hook but Delaware Bay is where they appear most consistently and in large numbers. In fact, the current world record Drum was caught in Cape May weighing in at 113 pounds!! Although a few Drum are caught in the surf each year, most fish are caught by boat and there are many Charter boats in the Cape May area that specialize in the fishery.

The action is typically not as fast and furious as some of the other inshore species since most trips 2 or 3 fish is about the best that you can expect... However they are very powerful fish and put up a great fight!

Best months are May and June.

How To Catch Them:

Best Places To Catch Them: