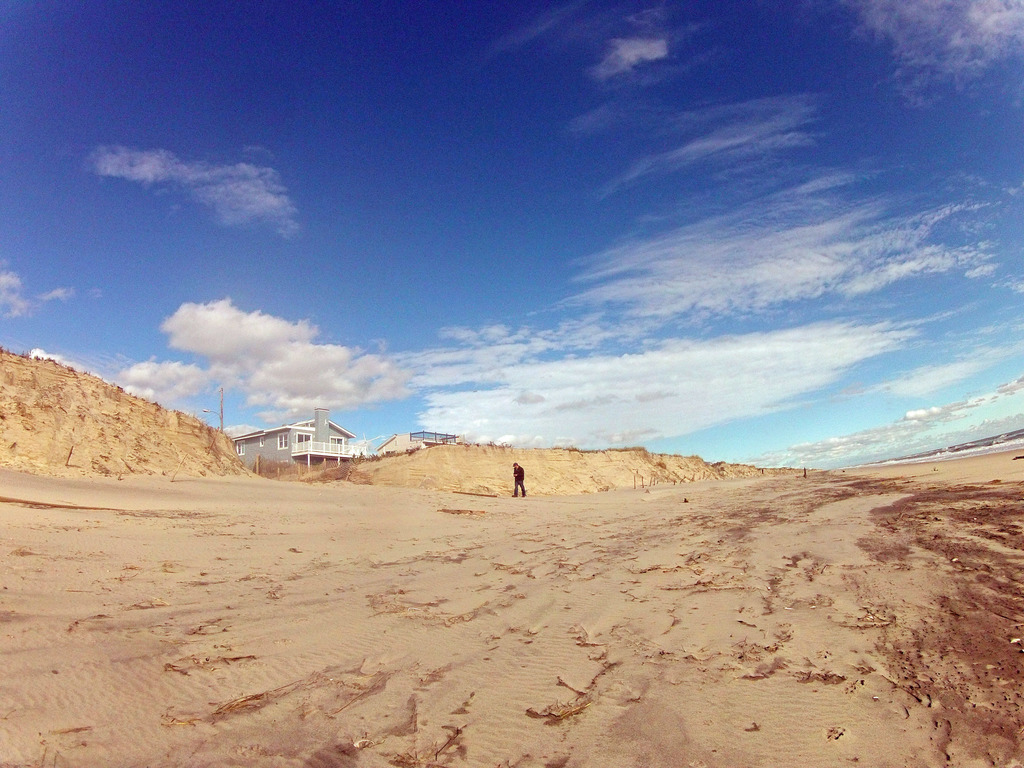 Short Sunday Nov 17 update: John K. and his buddy got into more keeper bass going for meat, bunker in their case. He called to say the three better bass they got didn't arrive at a fevered pace. In fact, it was roughly a fish every 90 minutes or so but the hookups were often enough to keep it very interesting on the south end-ish beach they were working. The largest fish, a 34-incher was taken at the top of the tide. John will be getting back to let me know what was in the bellies of the bass they kept. last bass were loaded with sand eels. John uses these sweet circle hook rigs he imports from NC. He always throws me a few. This year Sandy hit only days after he set me up.

Word of insane drop-and-pop eel fishing in Barnegat Inlet, right after dark. When the action is there, it's instant hist on the drop. The beach project had been planned before the storm hit, but state and local officials say the hurricane proved in a very urgent way the need for these efforts to continue.

The Army Corps of Engineers has spent the weeks after Hurricane Sandy examining dunes up and down the Shore to see what they can learn from their engineering projects.

One thing everyone agrees on: Where the dunes were high and wide, there was little if any damage to the homes and businesses behind them. The most destruction, they said, came to the towns with low, narrow dunes.

"If you look at the towns that have had engineered beaches, up and down the state, those are the towns whose damage was minimal," Gov. Chris Christie said during a visit to Monmouth County last week. "Other towns that didn’t, the damage was much greater. I think that’s a lesson for us as we move forward."

Stewart Farrell, director of the Coastal Research Center at the Richard Stockton College of New Jersey, has studied the state’s dunes for more than two decades. After Sandy, he dispatched three teams from the center to inspect dunes at all of its 105 study sites.

Although state Department of Environmental Protection Commissioner Bob Martin said Army Corps-built beaches held up the best against Sandy’s storm surge, Farrell said those aren’t the only beaches that fared well. In Barnegat Light, for example, where the dunes have grown by accretion, there are no signs of a hurricane. Farrell said that’s because with the design of the walls of the Barnegat Inlet, sand becomes trapped on those beaches and had naturally built dunes some 2,400 feet wide. For comparison, the Army Corps builds dunes 150 feet wide.

By contrast, the Ortley Beach section of Toms River had the lowest and thinnest dunes — 10 to 12 feet high and less than 50 feet wide — and it sustained the most damage on the coast, Farrell said.

In Mantoloking, where three inlets were cut and many of the 147 oceanfront homes have been destroyed or seriously damaged, town officials had let the dunes grow naturally, with the largest at 22 to 23 feet high and 100 feet wide, Farrell said. The homes that were decimated were behind dunes at least half that size, Farrell said. The houses behind the highest dunes had little or no damage.

"Where the skimpiest dunes were, that’s where the inlet formed," he said.

New Jersey has 127 miles of beaches, and the highest percentage of rebuilt coastline in the nation. More than half of the 97 miles of developed coastline has been rebuilt either by the state or the federal government.

And a large portion of the work has been done in Monmouth County, which is home to the the world’s largest beach replenishment project — a $250 million effort that has pumped 20 million cubic yards of sand onto the beaches. All Monmouth County beaches except Allenhurst, Loch Arbour, Deal and the Elberon section of Long Branch have been replenished, Farrell said.

Sand dunes didn’t provide the only protection from the storm. Buildings behind sea walls did very well, depending on how well the walls were constructed. Farrell said the best sea walls use only boulders, which deflect wave action. For aesthetic reasons, some towns pour concrete over the boulders, rendering the walls much less effective against waves, he said.

But sea walls aren’t practical financially. Beach replenishment costs about $10 million per mile of oceanfront, whereas sea walls would cost many more times that, Farrell said.

Army Corps project manager Dan Falt said the Monmouth Beach project, which had been awarded at the end of September, is still on schedule, most likely to begin tomorrow . Because the southern portion of the borough’s beaches had been replenished last year, the $9 million project will cover the northern beaches and possibly extend into Sea Bright, he said.

It’s up to the state and the federal government now to decide what beaches are next — and how the work will be funded.

"I can only imagine we will have more projects coming up," Falt said. "Our work’s cut out for us."

"The tension’s building," he said. "Some people are about to snap."

Donations to this site are now doubly-greatly appreciated: