Ship Bottom borough beaches will be opening to buggies on schedule, namely, the third weekend in September. Obviously, this is pending any beach drama created by storms between now and then.

Knock on driftwood but, to this season-ending point, we’ve been kinda quiet on the tropical front. However, as we move into meteorological fall, starting September 1, there is a change in the air – moisture-wise. Things are ripening for cyclones. It could be said things are heating up on schedule but flashing back to years past, we’ve seen full-blown ‘canes cruising the Caribbean by now. We’re bordering on a late start.

That said, it wasn’t that many years back we ended summer with virtually no named storms only to then zip through the alphabet by the end of hurricane season.

Lest we forget, the concept of an obediently contained hurricane season -- June 1 through November 30 – is now out the window. I’ll change it to Jan. 1 through Dec. 31, when including so-called subtropical systems.

According to Hurricane Expert Dan Kottlowski, "With the changing atmospheric conditions over the entire basin now, we could have at least two systems organizing this weekend spanning the area from just off the coast of Africa to the Caribbean and the eastern Gulf of Mexico." 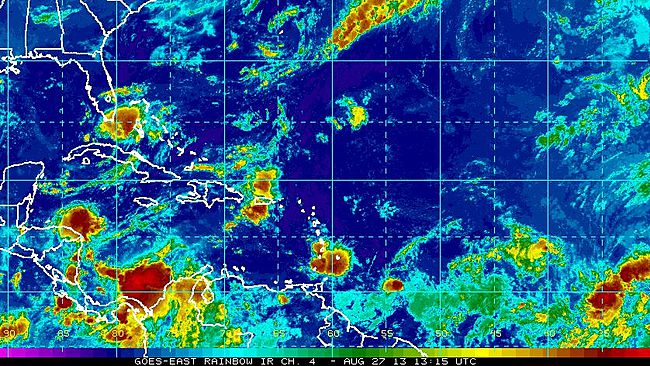 Dry air that dominated the Atlantic Basin during much of August is not as widespread this week. One system in the lower right corner of this Tuesday, Aug. 27, 2013, satellite image has a chance at slowly organizing later this week as it approaches the Windward and Leeward islands on the western fringe of the Caribbean. Another system over Africa, east of this image, also has a chance at development next week as it moves over the Atlantic.

"We are noticing a more moist and unstable environment taking shape over the tropical Atlantic this week, and we have indication now that multiple systems could develop at the same time during the first week of September," Kottlowski added.

Development of these systems is one thing; making a forecast track beyond several days until they become better organized is another. 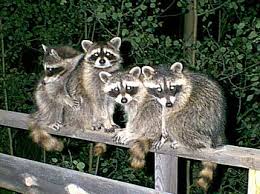 COON CITY, NJ: Getting world of a veritable glut of raccoons in Ship Bottom. I’m not talking a few but dozens on end. One has to wonder if the utter inundation of every single Barnegat Bay sedge island forced the resilient buggers to hop aboard any and all flotsam, riding Sandy’s last-gasp west winds onto LBI.

I’m not sure of the immediate social impacts from legions of raccoons on LBI but they are not to be toyed with when cornered or guarding young. By the same token, they adjust astoundingly well to humanity, all but buddying up with folks treating them nicely.

As a part-time job in Florida, I used to humanely trap the glut of ‘coons that had become far too domesticated in Sunshine State parks. I first used traditional traps but the critters got wise to that. I then stepped in  with used cast nets and the game was afoot. It was like shooting ducks in a barrel. Once, in just one throw, I took 11 of ‘em – being fed by a fake family of fellow animal controllers. Oddly, the impressively strong animals only struggled for short time inside the monofilament. Very quickly, they soon said “Screw this” and allowed themselves to be removed and relocated.

Yes, I got paid per capture. I soon returned up here but I still get called to see if I’ll come  back down to “net ‘coons.”

An article on Ship Bottom and nothing on Joe Gudice and his posse?

You running pics of the masked ones just seemed to be in synch with these no talents who steal from all of us. Imagine, claiming bankruptcy while owning a place in BHW, affording a party for 30 of their closest friends, refusing to pay five bucks like its a God given right, driving a beach badge checker to tears. They are everything thats wrong with our society.

Lets hope that its an act. Did they do it for the publicity?