Saturday/Sunday, July 15/16, 2017: Weekend surfcasters met with one of the largest eelgrass washups in many moons

Then there's always pre-chicken of the sea ...

Knowing the limits of your own skill set is vital in all lifeforms ...

Truex with a third place finish (P3) coupled with yet another stage win takes over point lead for all of NASCAR. Astounding.

Mommy got the pool winner today! Download Save to OneDrive - Personal
All week long bluefishing was as good it gets and you did not think it could get any better. Well it did not get any better, it got a little slower. Not sure why, but then again not sure why Saturday’s evening high tide was much higher than normal with no moon phase pulling it higher or persistent NE winds backing water up in the back bay. Sea level rise??? Saturday evening the Pereni group was back aboard the Debbie M looking to get into some of the hot bluefishing that has been going on. Well the bluefish bite was off. They did get to wrestle with a few bruisers in between the slop n& chop around the mouth of the inlet. We also decked a few short fluke in what would have been the best tide but now is not. The fluke bite seems to have taken a 180. The last few days incoming has had the upper hand. Likely cause is that the bay has finally broke the 80 degree mark for a sustained period. Some may like it hot but fluke is not one of them. Weakfish on the other hand love the warm bay temps. I have not tried for them yet but will try to chase some down soon. Cownose rays have arrived and you never know when you may hook into one. I heard they are pretty tasty. Think I will try one out this year. Since it has cow in it name I am going to make a burger out of it and make it like this: two all-ray patties, special sauce, lettuce, cheese, pickles, onions on a seasame seed bun. Have some openings this week. If you like hard fighting fish and don’t want a long boat ride you may be interested the beach shark trips if offer.
Screaming drags,
Capt. Alex
www.LighthouseSportfishing.com
Barnegat Bay, NJ
609-548-2511

We got ripped off yesterday, wind-wise. Those fairly brisk direct onshore (ENE) were dead opposite of the “land breezes” being forecasted – even as the onshores blew. It made ocean outgoings bumpy or undoable for smaller vessels. I’ll repeat, winds are harder to perfectly predict than the weather itself, especially on LBI, where onshores can be briskly blowing on the beach while mainland flags are straight out from west winds.

Water is holding in the low 70s, despite the onshores.

Just saw this report from Nick Chit: "Snappers everywhere. Are they good to keep and freeze for bait?" I think we all were wondering when the snapper explosion would show from all these choppers reproducing their heads off.

There is great entry-level sport in tiny snapper blues, when using very light gear ... and kids. No, not kids as bait but as learners, seeing what fishing is all about, starting small.

I'm not big on over-keeping snappers, though they have the same bag limit as the larger models -- keep that in mind, regulation-wise.

As to their effectiveness as bait, there may be no better doormat finders, though they should be fished very fresh or even alive. Give a couple added seconds of back-off time after a fluke pickup using a snapper. Of course, cannibalistic bigger bluefish love the heck out of them also. You can feel the telltale head-shakes of a blue going after a snapper. 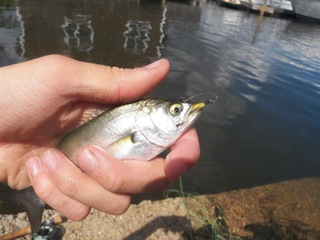 While I’m getting a decent showing of nice fluke caught bay, inlet and beyond, I’m seeing a slew of skunk reports, many with shots taken at current regs. Below you’ll see some more fluke-speak out of Voices of the Network. 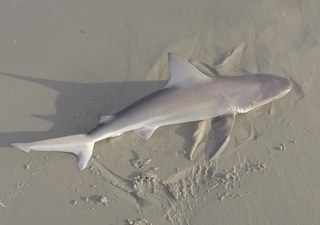 Kingfishing has been highly hampered by grass … and beach throngs. I’m tempted to throw on one of my new full-face diving masks and do a look-about for them. Kingfish are far from easily spooked, providing you’re floating above them, looking down.  Talk about energetic bottom feeders, as in nosing the bottom all-day; barely paying any attention to what’s above. They stop feeding at night and laze, almost dead-like, on the bottom, their camouflage coloring intensifying for protection. 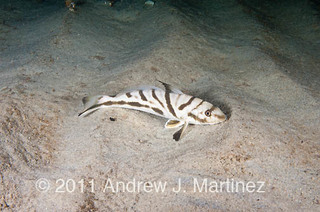 Has a young’un ask about blowfish – and I was stumped. I heard of very little puffer action during the spring migration, however, I’ve seen slow spring showings becoming fine fall runs. I also offered the fun option of chumming grass shrimp in deeper bay waters, places like Myers Hole, to see what panfish might be out there, quietly.

Speaking of Myers, a gorgeous one-shot weakie was taken near there. Had to be 10 pounds. No, I’m not burning a spot. “Near” can mean a lot of things. Besides, I no longer give a rat’s ass about mentioning popular locations as being “hot.” Rare and secret spots, those are different matters, worth keeping under wraps.

These are cool masks ... 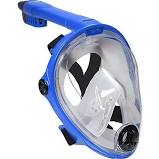 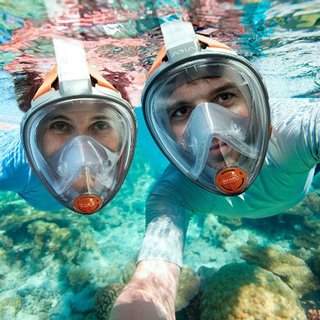 Members of the Network are speaking out against the recent decision by the Commerce Department to allow New Jersey’s noncompliance with the 2017 regulations for summer flounder set by the Atlantic States Marine Fisheries Commission (ASMFC). This marks the first time that the Commerce Department has overruled the decision of the ASMFC and the Mid-Atlantic Fisheries Management Council, which is made up of state representatives from the Atlantic coast.

Here’s what Network members had to say:

“The Commerce Department’s ruling dismisses the science-based management and conservation measures fundamental to the Magnuson-Stevens Act and best fishery management practices. In this case, the Commerce Department disregarded the Atlantic States Marine Fisheries Commission’s position and authority by allowing one state to ignore regulations established by the Commission to properly manage and conserve the resource for all.”

“The Commerce Department’s action has seriously undercut the authority of the Atlantic States Marine Fisheries Commission, which will no longer be able to credibly use the threat of a moratorium to encourage compliance with its interstate fishery management plans. New Jersey’s successful adoption of non-compliant regulations can only encourage other states to take similar action, and may have sounded the death knell for coordinated fishery management efforts on the East Coast.”

“At ASMFC, states vote on and approve management decisions that affect the entire coast. This makes compliance with such decisions very difficult. This decision shows it’s now possible, and perhaps likely, that states could put together whatever questionable data they can scrounge up and appeal to Commerce. That sort of thing would negatively affect other fisheries, such as striped bass, up and down the entire coast. This sets a really bad precedent.”

“The Magnuson-Stevens Act puts fish first in this nation to ensure that fish stocks are rebuilt. Having more than 40 fish stocks successfully rebuilt proves the fish first policy works. When decisions – such as the NOAA’s decision allowing New Jersey to make their own summer flounder regulations – are allowed, they put the interests of individual states first. This is a recipe for disaster. States are subject to local political pressure to put local interests first, and the fish will take a back seat. The big concern with this decision is that other states will decide to fish the way they want to regardless of what’s best for the fish, and we end up with total chaos.”