Saturday, September 23, 2017: What a day. Hope you’re not reading this (until later) … and you’re outside, maybe down at the Decoy Show in Tuckerton

Realizing their over-three-hundred-pound racing swim team might not have been such a good idea, Big Al decided to test the rules a bit ...

Have a sanderling look: 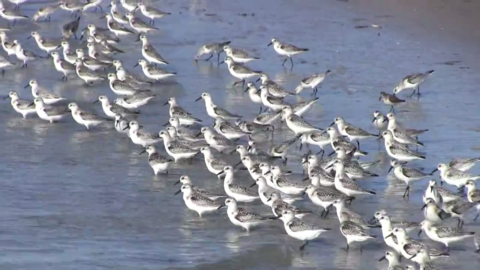 A couple years back: http://www.youtube.com/watch?v=AI8CbPB-U9Y

MOTORIST ALERT, LBI: There was some borderline moderate flooding on LBI yesterday. That could show again today, hopefully not as bad.

The Boulevard between Ship Bottom and Beach Haven can be a watery bitch to drive.

This flooding is new moon, equinox and, most of all, the bay having been filled to gills by the recent northeast blow ... but unable to drain due to ground swells forcing more water through the inlets.

What we’re seeing is purely over-flowing bayside water. It is some seriously caustic stuff on vehicles. Rinse off like crazy after driving through such standing water in the road, which was impossible to avoid on the Boulevard early afternoon yesterday.

Just as spooky, those bright orange road department flood barrels are left out even after the standing water fully recedes from the Boulevard. They often partially block the right lane, meaning right-lane vehicles quickly have to cheat into the left lane to get by them. With left-laners being their typical hauling-ass selves, there can be some nasty close calls, if not sideswipes -- especially with aggro left-laners offering that attitudeous, “Damn if I’m letting you right-laners drift into my lane!”

Be nice. Below: Ship Bottom yesterday.

Below: Got wet yesterday, during bayside high tide. Saturday, September 23, 2017: What a day. Hope you’re not reading this … and you’re outside, maybe down at the Decoy Show in Tuckerton. Make sure to try those skewered scallops.

BUGS WIN, HANDILY: Aftermath of my effort to get even with black flies in a Black Flag manner …

I now bitterly recognize there is no such thing as a black fly-acide. Yesterday in Holgate, entire battalions of those biting uglies took direct spray hits from my can of industrial strength Raid Flying Bug Killer. It proved about as effective as Trump threats sprayed at Kim Jong-un. To this point in life, I never knew flies could chuckle. They did so … right in my face. My “Say hello to my little friend!” slowly faded into “Aw, come on! You can’t be serious. This stuff could kill an elephant.” Then the little buggers all began to make elephant sounds.

I threw the insecticide in my truck and drove all the way home to re-dress. I now simply wear longs pants, long-sleeved shirts and boots … even in 90-degree heat.

Speaking of that heat – and the mainland could see a day of temps well into the 90s – this late warmth has been the main opinion I’m getting on why the mullet aren’t moving. I listen respectfully -- and resist explaining it’s now the length-of-day that now sparks the move southward. I still acknowledged that a hot bay might be slowing things. Hey, the spirit of a castnetter must be indefatigable. I see me standing out there, net over shoulder, amid December snow showers, all, “You just wait and see. It’s gonna be the latest muller run ever.” Snowy owls will be next to me, pruning themselves, having decided to hang out near “the crazy man.”

SAY WHAT!?: If it seems I haven’t touched on fishing all that much, you’re right as rain … and wind and waves and currents and …

The sea and sky have been conspiring against fair-weather casters, of which I’m now a proud card-carrying member. T’were times I’d already be out there in full fall-fishing mode, often after dark, idly tossing out chunks of bunker, on two rods, while plugging away with another. I have no idea who that person was … or why I had assumed his persona. I’d now rather watch reruns of the Kardashians and last night’s meaningless Phillies game than fish just for the catch-nothing fun of it. I’;ll go as far as: A bad day at work is still better than a bad fishing.

Kim ... After tuna fishing all day:

This is not to even remotely suggest I won’t be the first guy snaking in on the bite -- after other diehard personas painstakingly discover the fish have finally shown. “You don’t mind if I set-up between your two spiked rods, do you?” Of late, the most action I’m seeing is still dozens atop dozens of bluefish … caught in my castnet.

I don’t want those baby blues in my fairly costly net but with mulleting so bad, I’ll know even throw on what we call nervous water, which is water slightly rustled on the surface, indicating something fishy is going on down below. On rare occasions, nervous water indicates mullet below. On most occasion, it’s clouds of tiny snapper blues chasing spearing to the surface. Once netted upon, the spearing flee through my net’s 7/8-inch net opening, leaving a load of enraged mono-tearing snappers ensnared, biting the crap out of my net. 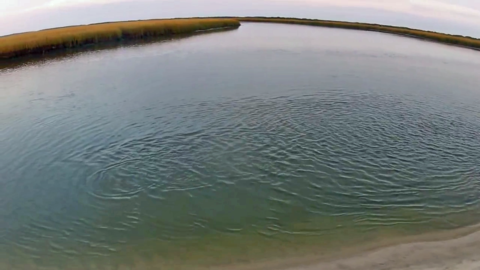 Here the entire video of those on-the-move mullet: http://www.youtube.com/watch?v=meLDqyW9Kj8

I just noticed there’s some sort of surfcasting contest on the beaches of Surf City and North Beach. The ocean is having no part of it, though lines are still in the water. I’d suggest they use boat anchors as sinkers. The north-to-south current is fierce.