I dedicate this day to the unsung heroes who prefer to just walk away, unnamed. 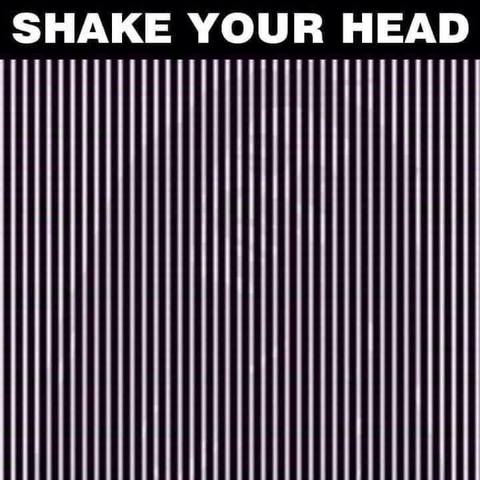 Saturday, September 19, 2015: Dead calm this a.m. but some tricky patchy fog for many boaters heading out for the final week of fluke fishing.

We know next year is going to bring bag and/or season changes on fluke. While I’d like to think the average angler will have a say in what plays out during the establishing of those regs at the state level, we of a surfcasting ilk are a bit like arts programs in school curricula, we’re the first to get cut out or short-changed, in this case via a shorter season at the fall end of things. I’m not saying that’s what’s going to happen, I’ve just seen that prejudice in the past … even when we have the support of JCAA and RFA.

“Pulled the trawl this AM. One 6” gag grouper, two banded butterflies, one tog, a few juvenile fluke, minimal shrimp, and five nice Jimmy crabs that will be an appetizer tonight. Set up on the north jetty at 8:15. Beautiful flat water but devoid of fish. I ended up with two 4” seabass, no tog, no bass. Packed up and headed out to just inside the bell buoy where I saw some boats. 2lb bluefish busting everywhere on spearing. All surface action with fish coming out of the water everywhere. Played with them for a while and then I started jigging the marks on the bottom: 8” weakfish and 6” bluefish covering the bottom banging anything you dropped down.  WP” 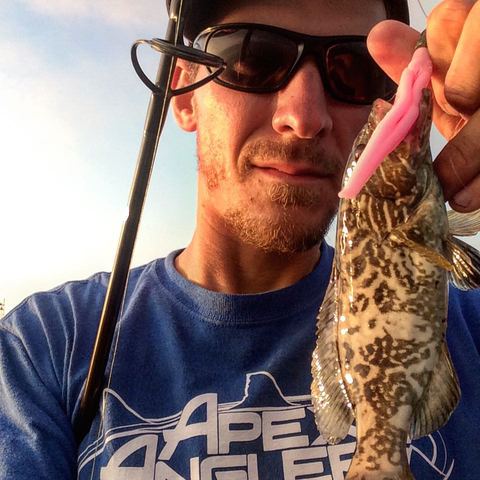 Also word (after word) of more exotics: “Hey catching these Cool looking little 6 " fish in the wash. Is it some kind of ‘Cravale’? David D.” 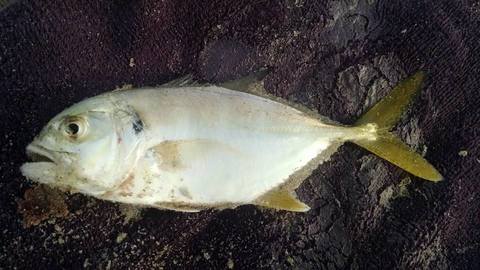 (These jack crevalles are everywhere his year. When combined with the banded rudderfish, yellowtailed snappers, assorted groupers and tons of small pompano you'd think we're the new Outer Banks.)

A small houndfish was caught in the Holgate Rip. And not much else. Fishing has sucked on the south end. I’m allowed to say that because I also publish when it rocks … which it isn’t, as dictated by the current outflow of 72-degree water. Not only haven’t I caught squat but I cast off a costly Spro jig and teaser set-up. Snap! Seeya.

If you find this on the bottom, please return to me.You can keep the GULP strip on it. MORDECAI MATTERS: You might see some dredging equipment in Little Egg Harbor, near Parker’s Island. That is the equipment which will place dredged channel material onto the eroding Mordecai Island, a project that the Mordecai Land Trust (“Mordecai Matters”) has been seeking for over a decade. 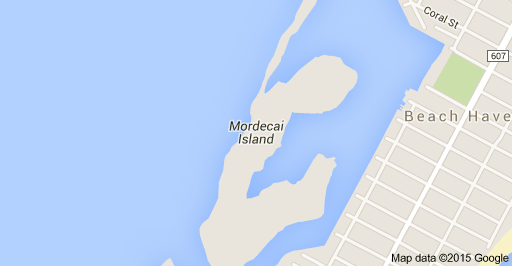 Mordecai Land Trust was founded in 2001 as a community-based organization whose mission is to preserve Mordecai Island as a habitat for breeding and migratory species of indigenous birds and fish and to protect large portions of Beach Haven proper from flooding. Mordecai Island is a 45 acre, uninhabited coastal marsh island in Barnegat Bay, NJ. Mordecai is located near Beach Haven Borough and is adjacent to the New Jersey Intracoastal Waterway, the main navigation channel of Barnegat Bay. The island’s native salt marsh and surrounding waters provide a variety of habitat supporting aquatic and avian species. Habitat includes eel grass beds in shallow, protected areas, intertidal zones, coastal wetlands, salt ponds and uplands. The island is experiencing accelerated erosion and has lost 26 acres (37%) since 1930. Causes for this erosion are thought to include a realignment of the New Jersey Intracoastal Waterway, storms, boat wake, and sea level rise. During this same time period, Barnegat Bay has seen many miles of shoreline bulkheaded and tremendous development. The replacement of natural land-water interface with bulkheads and riprap revetments eliminates the crucial part of the coastal ecosystem that thrives at the edge of the marsh. Since Mordecai Island provides vital habitat for many species of fish, plants, migratory and breeding birds (including threatened species) as well as mollusks and crabs, the loss of 3 to 6 feet per year has caused great concern. In addition to its educational and other actives, the Trust has two on-going restoration projects.

BUGGY BANTER: Regarding buggying in Holgate, it didn’t take long after that spurt of rain for the south end sands to dry and the worst sinkage in years to return, big time.

Below: Holgate back in the day. It's always been a tough go where you first come on -- by foot or buggy. Somewhat differently, the on/off ramp is now a bit of a bitch. The usually well-packed sand on this on/off stretch is loose and deep at the bottom half. As we all know too well, you can’t always get a head of steam going to get up that ramp with folks suddenly walking onto the tracks. Make sure you have a clean exit, without walkers, before accelerating into the final approach to the ramp. Don’t inch up to the bottom of the ramp zone and stop. Not only is it majorly sinky but you won’t get enough forward progress going forward, amid that aforementioned thick sand covering half the ramp.

Also, there can be some attitude astride with certain walkers – not all of them, but those “certain” ones can offer some acerbic verbal and facial offerings. I just go with the flow – most of the time.

Below: "Now, ma'am, just calm down. You just happen to be lying right where I wanna fish. It's purely a coincidence. I swear." Below: Fortunately, most Holgate visitors are mellow folks. My photo. 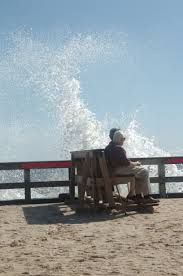 Anyway, for the first time in year, I’ve been reduced to 22 psi to negotiate from the ramp to Rip run. Broken record: Stay within the tracks and you should be fine, Obviously, at low tide the hard sand is the ticket – until you get to the ramp area and are forced off the hard sand (often by beachgoers) and need to bust onto the upper beach -- and into the worst of the loose sand. To make the transition from wet sand to upper beach dry sand, get some steam going and try to use existing tracks. Once over the berm, quickly get back onto the main tracks. The ready for the aforementioned exit strategy by seeing if the tracks up head is clean of beachgoers and incoming traffic.

BELOW: Today the Holgate ramp is light years better than in recent years, seen here. One other Holgate buggying note: The main tracks -- which most folks are using – are kinda hard to break out of in the face of oncoming traffic using the same tracks. I won’t get into who has the right of way; that’s a politeness call. What I do suggest, if you’re going to break out of those often very deep tracks, look for anywhere someone else has already broken out, or, first get some forward momentum going before moderately cutting the steering wheel to bust out. It can take quite a few feet for even well-deflated tires finally to bust out. Do not (!) over cut the steering wheel/front tires to bust out of the tracks -- for your vehicle’s sake. You can actually hear the engine begging for mercy when the front wheels are facing almost fully right or left and the back ones are trying to push straight ahead against the entire frickin’ beach. Brutal on the engine and suspension.

It's worth the sand hassles. Guess who caught the first keeper? This kid never ceases to amaze me! 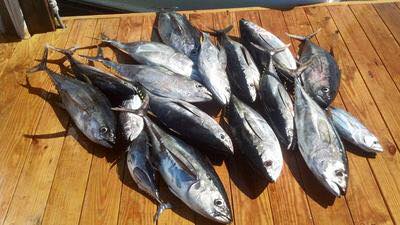 I have to look into any photos taken of that odd sign.