Saturday, September 12, 2015: The talk of the walk remains the ocean temps. 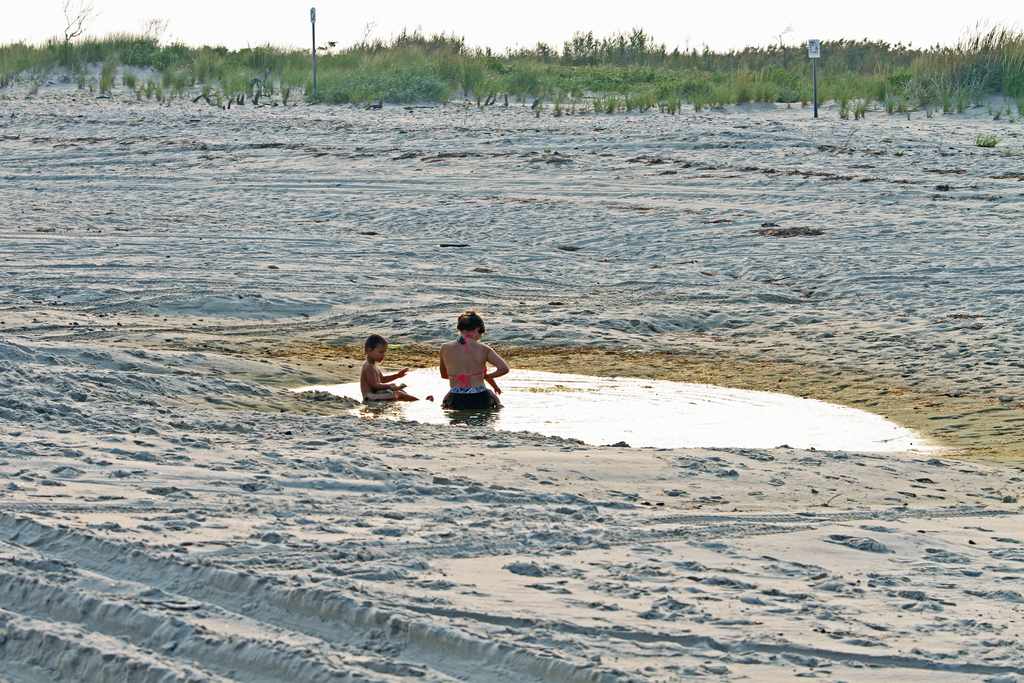 Here's a look at egrets and Rutgers students at work/play ... You've heard of Hatteras sinkers but how about San Fran sinkers?

Saturday, September 12, 2015: The talk of the walk remains the ocean temps. The entire Jersey Shore is roasting; not the air temps, which have mercifully dropped a bit, but the surf temps. I got as high a 77.6 in Harvey Cedars and 74.5 in Holgate. Yes, ocean temps can vary, sometimes greatly, from one end of the Island to the other.

Today’s straight onshore east winds, a rare wind direction to be sure, have possibly added another degree or two to the suds.  I’ll know more as I get out and about late today.

If bathing, make sure to bath with a friend ... I'm talking about the ocean, of course.

The mullet continue to dribble through, though (oddly) they got very small late yesterday. That was a bit weird since smaller mullet usually come at the end of the run. But George G assured me we're still too early in the run to see a pattern.

Importantly, not one single mullet of any size has had a bite mark, meaning the cocktail-sized blues aren't in the house, even though I saw a few caught at the Rip yesterday. Those tailor blues had spearing in them, which makes sense. I have not seen a larger run of small spearing in over 20 years. Tiny blues are harassing them, which brings up an odd observation I made two days back.

I was trailing a decent school of typically tight-packed mullet as they moved fairly briskly  along. I then saw a school of far more loosely packed tiny snapper blues outside of them, toward deeper water, moving along at the exact same speed as the mullet.

At first blush, it seemed a typical stalking behavior by the tiny blues, except the mullet that day were almost as big as the snappers. Then the weirdness hit. A minor wave lifted up the mullet and the blues exploded -- underneath of them and into the river of small spearing moving flush to the bank!

I swear those micro blues were strategically using the cover of the mullet school to ambush the spearing. Offering even greater merit to that possibility was the fact the rising mullet didn't even remotely break stride, so to speak, as the bluefish attacked. They knew they weren't their targets, indicating this same ambush scenario might have been happening all along.

I want to note the excellent catch of suds fluke taken by Dante S and Justin I. See photo. They were using bucktails; fishing tackle I’ve been close to since one appeared in a military survival package. 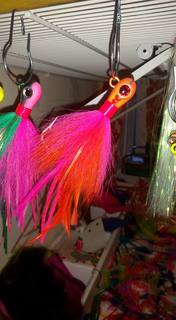 Of course, the upgraded styles and looks given to old “leadheads” have gone through the ceiling. The paint and buck tail jobs have gotten insanely cool.

Another interesting jigging rig aspect that I used to use (in a far more primitive way) is the use of smaller jigheads in a teaser fashion. They’re swum off a short dropper loop, a foot to even 18 inches off the tag-end bucktail. A few folks using this double-jig setup find that sometime the smaller teaser jigheads take betters hits on certain days. While this double jig setup works easily on a boat drift, when used in surfcasting, you need to use a stiff lead material so the smaller jig sticks out. Light leads and it can wrap around the main leader line.  So why not simply use a teaser? Hell, I don’t know. Maybe the added bounce of the small teaser-like bucktail looks more realistic to a trailing gamefish. It might also more closely match the hop of the main jighead, giving it a more natural action.

Below: And custom jigs can get weird. 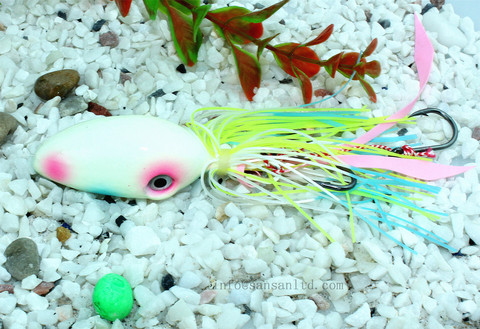 Below: Great group of anlger: 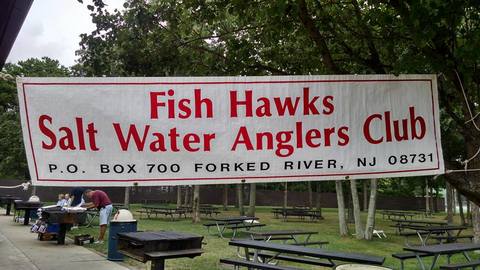 Keep your friends close and your enemies ... 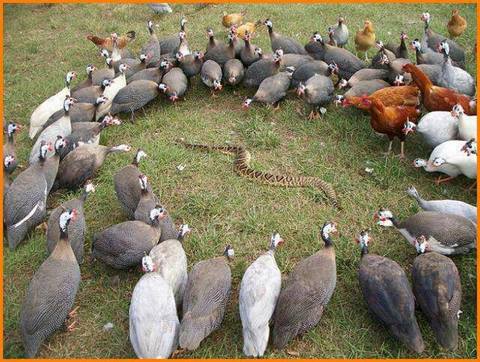 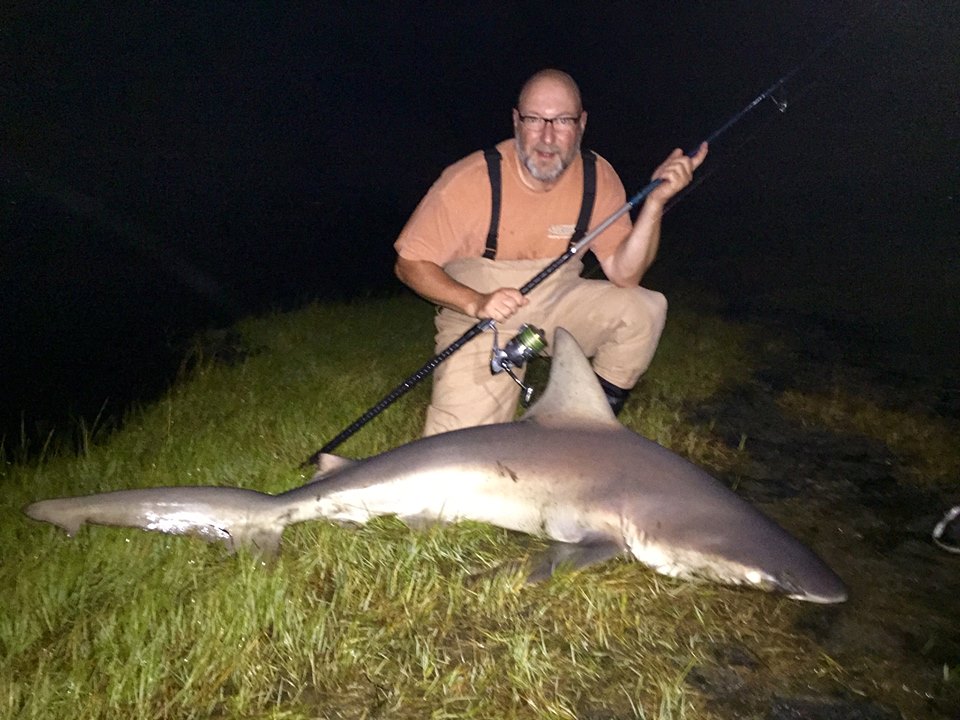 Over 6 foot Brown Shark on LBI with Rich Swisstack and Davy Torrick on the new 12 Foot Legend Surf. 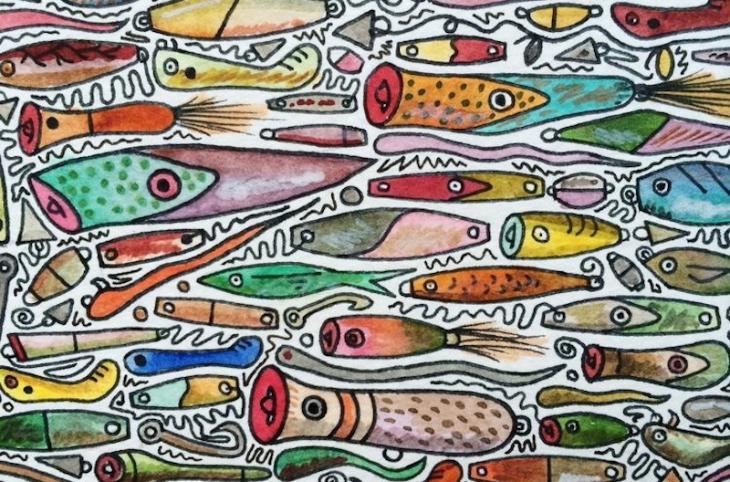 Nice morning especially since that heat & humidity broke from earlier in the week. Still a bunch of shorts hitting and snappers and still looking for any signs of any mullet run around my area heading into the weekend. Have a good one everyone. Cstch'em UP !