Saturday, November 09, 2019: That was pretty cool … I mean cold. I just got in (5 p.m.) from plugging Holgate, where I scored a couple schoolie bass in the 18-inch size realm. Hard to believe that bass that small can be kept down south. Returning to the subject of cold, I learned a glove lesson all on my own: You don’t wait until your hands are all but numb to finally resort to putting on gloves. Apparently, gloves are meant to stave off cold, not suck it out of already numb hands. I likely could have caught another adolescent bass or two but as the sun went down, so did the temps. Funny how that happens. I took a 39-degree air temp. (Here's what I wear.) Confirming the changing season, I saw Fred the seal for the first time this fall. I know it’s him because he’s huge, easily three harbor seals long and twice as wide. Bob at Marine Mammal Stranding Center once told me the breed, but I forgot. It’s easy to see him coming up in the rip since he parts the water. After Fred came up a couple times while I was casting, I put down my rod and tried to wait for him to appear again to snap a photo. He must have known. I chilled out on photography before he showed again. Also, there were fish to be had … and fingers to have frostbitten. I know it wasn’t nearly cold enough for that but getting used to this first cold snap was as tough as I expected.

I’m seeing computer projections showing a developing cold air mass about to impact much of the country. It could easily be one for the November record books, though we won’t be getting the brunt of it. It will offer the first white sights of the season. We will feel a serious chill, though. Just soldier through and get ready for mild to freaky mild air masses in December.

Loads of boats out stripering today. A couple dozen were high=speeding it in through LEI as the sun gave up the ghost. I’m sure the Facebook reports about stripering will pop all evening and into tomorrow. It now looks as if tomorrow south to SW winds will not be honking, possibly offering boat bassers another day to mug them. PUTTING UP A BASS: 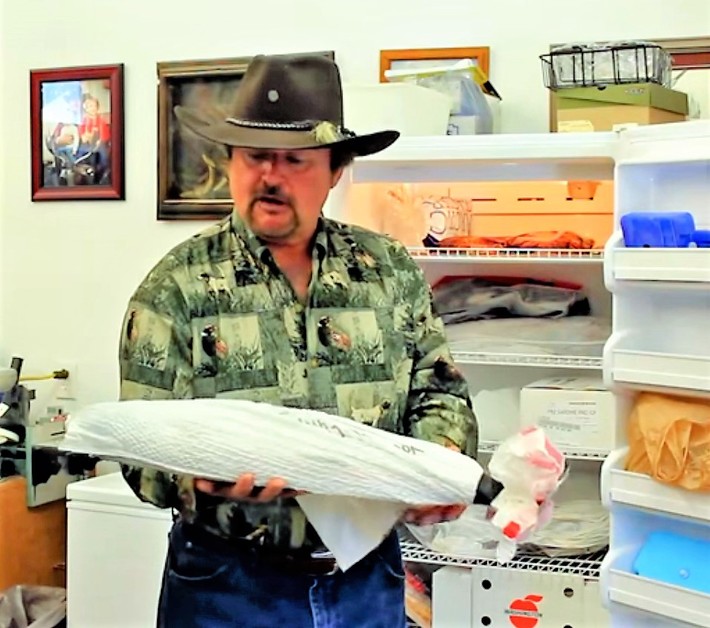 It's time to think Thanksgiving dinner striper, an LBI holiday tradition, which includes Christmas. Ideally, a bass can be caught right before the holiday. But, just in case the bassing doesn't hold until those holiday (especially Christmas), why not pack away a nice eater-sized bass -- now that the gettin' is good. I'm talking about packing away the entire fish. A compete fish presents way-well on the table.

It's easy to freeze-away a complete striper. Right after landing, slice a gill raker and let the fish bleed out. No need for more than an hour of bleeding. Gut it and rinse. Icy saltwater makes a fine rinse if you’re in the field (ocean).

To store/freeze, dry a bit and place the whole fish in a suitably-sized non-rigid plastic bag, like a smaller trash bag (see photo). I prefer white bags for no special reason. NEVER use scented or so-called odor-guard trash bags.

Once bagged, push bag tightly around the fish, eliminating as much air from the bag as possible. You really don’t have to vacuum pack it, but feel free if you have the equipment. Bind or seal the bag tightly at the top.

Next, it’s straight into the freezer. If there's a slew of other things a-freeze within, lift them up and place the fish underneath. This speeds up the freezing process. The faster you get it frozen, the better it'll thaw out.

With a holiday about to happen, fish the fish from the freezer.

Now, to an important part: Don’t just plop the frozen fish on a counter or some other flat surface to thaw. That mucks up an entire side. Instead, float the bagged fish in water. Tap water is fine. A cooler is the perfect thaw container. Allow it to thaw, possibly overnight.

Once thawed – or close to it – remove the fish from the bag. It should be amazingly close to the look of the fish when you first pulled it out of the water. You now have the option to fillet it as if just landed, noticing the excellent quality of the meat. That meat would not be as nice if you just thawed frozen fillets.

For epicureans and gastronomes, baking it whole takes the cake. Yep, scales, head and all. You’ll be removing the skin and scales when the baking is done. This method offers the maximum amount of meat. Don't forget the cheek meat.

Note: If you happen to have a diner who might be a tad sensitive to the head and eyes still being on during carving, lop off the head. No, not the diner's! You know what I mean.

Cooking time is a tad tricky when baking with skin/head on. Think in terms of 45 minutes to an hour in a hot (450 degree) preheated oven. Fish should always be cooked at very high heat. Turning once nicely rounds out the presentation. Don’t fret if scales curl or the skin browns a bit. It’s the gorgeous white meat steam-cooking inside that matter. I sometimes lift the skin near the dorsal fin to fork-check the doneness. Present by peeling off skin at the table, then fork the flesh from the bones, taking special care around the bony ribs. Bass has a very forgiving bone structure.

I should mention that bass is always scarfed up, often gone long before the turkey. You might want to freeze/cook a couple if the whole gang is feasting with you.

By the by, the eyes are eaten by many an Asian. But even if you have Asian friends sharing Thanksgiving with you, I doubt they’ll take to the old-country custom. For chuckles, you can sneakily dole the eyes out to someone you know who can take a joke. (Can you tell I've done that before.)

This might sound a bit work intensive but look what it takes to prep and cook a turkey.

Folks have asked me why they're called spiny dogfish, aka spiny sand sharks. I came across this chucked one. Seen here, its second (rear) dorsal shows the spiny part quite nicely. The first dorsal fine has even a larger spine -- but this shark had it broken off. Needless to say, a spiny dogfish's spines can inflict serious pain. There is also seemingly a mild toxin associated with the spine since a skin piercing is accompanied by a burning pain above and beyond your everyday puncture wound. Big fish weighed in last night and now another one! Is this the start ?!?

Pete Shearer here with his NON TOURNAMENT 48”, 38.36 pounder off the surf. SC, bunker. Pete also shared with me that just before the “hit” he was having a moment, talking to his father who just recently passed and next thing he knows, rod is bent and drag is singing. Good job Pete! I believe he heard you... ~Jerry.

Then bass have arrived ! @just_one_more_turn