Memorial Day is also for the soldiers who saved lives behind the scenes -- with a strong grip. "Thank-you, Gunny!"

Below: Some holiday fireworks are best left untried, i.e. don't try this at home.

Below: So this is the Memorial Day you finally let the kid handle the barbecue duties, eh?

Saturday, May 28, 2016: It's hoppin' out there, might say it's a hoppening day. The crowds are massive and the windy beach condtions has many folks out and about ... spending their pretty little heads off. You go ...

And those winds are bothersome to the boat angling realm ... and even surfcasters. Here's hoping tomorrow early a.m. will be kinder and gentler ... before the afternoon breezes kick in. Super sunscreen is demanded today. The wind rile the skin and the UV rays take full advantage.

Pedestrian and drivers are playing fairly well together, with most motorists used to the "must stop for crossing pedestrians" law. However, that law is a two-way street. While the great majority of street-crossers wave very nicely to the drivers who have stopped, you have some huffy types sporting an air of crossing superiority, who not only step out with instant arrogance but then purposely lollygag in some sorta show of comeuppance. Can you tell someone did that to me today?

I want to make an important legal point here. Even though road-crossers may be jaywalking, if they've clearly committed to crossing, you are still legally obligated to stop. Your's is not to question why ... but hit the brakes. Again, it's the law ... meaning you don't get to run jaywalkers down. Kapish?

Hate to show this (though no serious injuries, I checked) but s*** happens just this fast.

As I hung out at the South Jetty, I was astounded at the shoaling in the middle of the inlet. It always builds up there but the shallows are now further reaching than at any other time since the new jetty was built. I’m figuring the hopper dredger will be showing up soon -- but it’ll have it hopper hands full. In fact, I doubt it can clear the accumulated inlet sands by summer’s end. 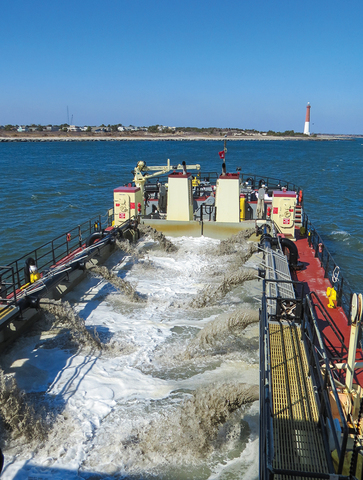 On the up side, the shoals themselves are leading to a nice deep channel along the North Jetty. They do that by diverting tidal flow outward. While that might sound like a good thing, a single storm could drain sand from the shallows into the channel … and then there’s no coming or going in safety.

The South Jetty channel is not faring as well, though small craft are opting to use it to avoid the crowded Barnegat Inlet north cut/channel. However, that brings the boats into conflict with the million or so anglers fishing the jetty. Talking with some regulars there, a number of folks have had lines cut by passing vessels. That’s a losing cause for all parties. You wanna over-strain a motor, allow a ton of line and fishing gear to get hung up in the prop. You wanna see half a reel of line ripped from a reel, have a passing prop grab it.

I bring this up since the south winds today will likely have flukers working the semi-protected inlet. 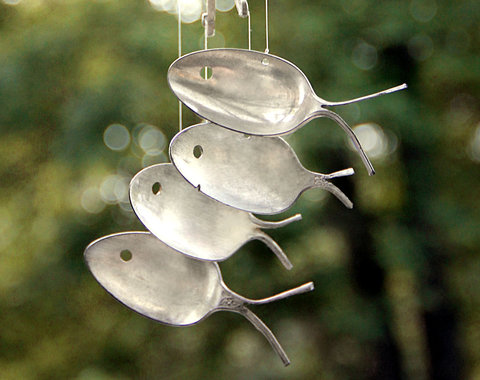 LINGO LISTENING: During my jetty walk, I couldn’t believe the UN-ish number of nationalities fishing there. Which is just fine by me. My many years of Hawaiian training opened my wind to accepting the world. Language-wise, I recognized Vietnamese, Mandarin, Spanish, Italian and even Arabic (I kid you not since I chatted with them – in English, of course). However, I homes in on some languages I couldn’t even guess at. Hell, there might have been a couple that are only spoken on that jetty.  But my best listen-in came when couple full-blown US urbanites were having a blast fishing big blues.

Hey, all are welcome here. Also, every person I waved to, or offered a “Howzit?,” responded like I was a long-lost friend. Real friendly folks. 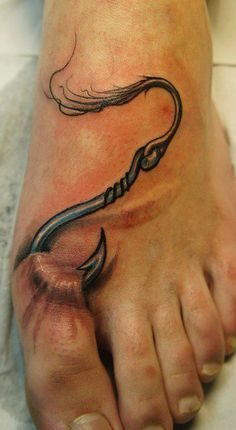 LEANING DECK OF BARNEGAT LIGHT: I was a bit taken back by how quickly the somewhat-new concrete jetty deck is going south … make that north. It’s leaning Pisa-like, toward the inlet. It’s a bit like walking on the deck of a listing ship deck. 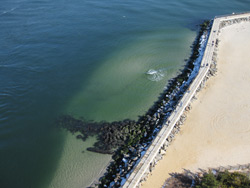 As you might know, this fall the state will be pumping bayside sand -- from the deepening of Double Creek and nearby waterway -- onto the seriously eroded/undermined south side of the South Jetty. Currently, the area adjacent to the south side of the rocks fills with water at high tide. It’s not supposed to do that. The resulting ebb-and-flow of water is scouring the north side of the jetty, causing the rocks to shift, essentially sliding north. That’s likely caused by the supporting sands being scoured away. At the current rate, there is very little chance the decking will last even another five years, before angling too steeply to be safely walked. The dredged sand might stop the daily exchange of tidal water but the north side might need rip-rap to stabilize the base of the jetty. Then, the entire deck might need rebuilt. If it ain’t one thing, it’s a dozen.

Below: The channel for the Barnegat Light public docks will be deepened this fall. The sand will be placed over the erosion zone of the South Jetty. 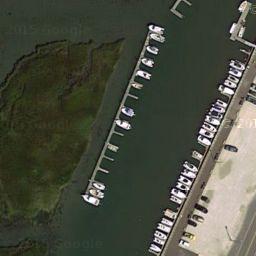 BE BRAINY WITH BRAIDED: I saw a heap of beach trash collected from a Barnegat Light State Park area being closed off for nesting birds. What a tangled mess, led by ghost fishing line, most troublingly of a braided breed.

I have to at last try to beg anglers to be doubly careful about losing braided line. Once that stuff gets lost, and bird-nests, it binds everything it gathers so tightly together there’s no separating the assorted pieces, i.e. no recycling.

As to any creature getting wrapped in braided line, it’s curtains. I’m not saying mono is a bargain but it’s at least it’s easily cut -- and can be recycled.

BLUEFISH BALLYHOO: I had an interesting chat with a headboat captain who says he hasn't seen nearshore bluefish like this ... ever. However, he brought up an interesting point when he said, "We usually get them like this offshore."

That reminded me of the debate a while back over a "nearshore" and "offshore" stock of bluefish. Maybe the twain have met.

Looking further ahead, one would think this showing of mature blues would indicate a massive spawn, providing the larval and baby blues make it.

I guess this gives a hint as to why bluefish are so amazingly cyclical.

Below: What a transition from this ... 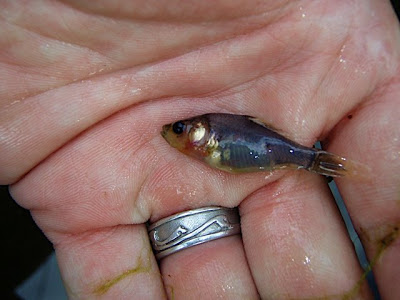 Below: Brendon out-fished his dad this day. (Grandson of Bruce and Pat) 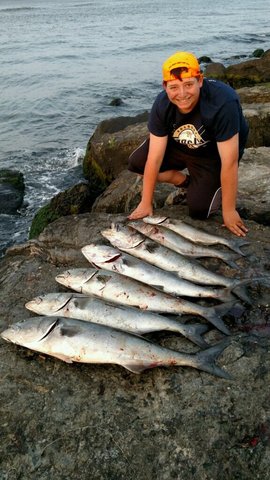 Another good day on the water. 5 keepers up to 21.5 " for 2 guys and some short action. Was good on slack tide with 3 of the keepers. Fish are feeding on mostly shrimp and crabs.