Saturday, May 27, 2017: Was told about a few recreational fleets in near-beach water off LBI. Binoc-ed but couldn’t tell what was coming up

Saturday, May 27, 2017: Saw a few recreational fleets in near-beach water off LBI. Binoc-ed but couldn’t tell what was coming up, though I have to think blues over bass or fluke. I’ll await reports

Fluke reports are flowing in but short of photos I steer clear of that entire angling free-for-all. You have to admit it’s a frenzy-feed for the entire season, for a fish that is purely taken for the meat. Show me one person who targets fluke just wanting the enjoyment of the fight; then catches and releases them.

By the by, I have no problem whatsoever with this meat-hunt. I just think it’s mercenary by nature, making it a realm where fishermen should just find their own ways. Of course, I make an exception when it comes to fluking the surf, far and away the hardest way to find flatties. If I can offer any data allowing that over-challenged LBI group to grab some take-home material, I’m sharing it – beginning with a suggestion to head up to Island Beach State Park. Enough said on that.

Yet more better bass in the surf, still likely due to the lack of baitballs off the beach – to draw out trophy fish. At the same time, the odds of ending a surfcasting day with two – or even one – keeper/allowable striper is not favoring anglers. Chunk bait remains the way to go; clams possibly edging out bunker right about now.

Not that there aren't bass further out. See report further below.

Great day fishing the BHMTC LBI Cup with Ralph Lopez, Matt Lopez, and Don Readling. This fish got 4th weighing 44.75 pounds. Congrats to all the anglers and volunteers. 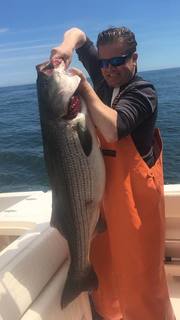 Has anyone heard of any blowfish. I’ve been asked twice by visiting anglers and families. I’m clueless, though I sorta think they might be majorly AWOL … at least to this point. I’m not sure it matters, but there were plenty down in Florida this past winter, not that they’re utilized there, being the only fish that isn’t kept in the Sunshine State.

I did get a minor update on the Little Egg Inlet channel. The Army Corps has no problem with sand from the dredging of a new channel being placed on the beach. They kinda invite it. In fact, they’re on board with the notion of a repetitive, or ongoing re-channeling when needed, along with the repeated use of the dredge material to buttress the beachline from roughly south Beach Haven through Holgate proper; Holgate proper being my weird way of designating the peopled part of Holgate, as opposed to the natural south end, or the Holgate reserve area.

However, the Corps has very little say in the matter, per se.

In case you hadn’t guessed, all is not flowing so smoothly in the effort to build the first manmade channel in Little Egg Inlet. As I’m hearing it, the National Fish and Wildlife Service (FWS) is apparently holding things up by demanding what amounts to a guarantee that the channel-building or the aftereffects of same will not impact the federally-owned or -influenced shorelines adjacent to the proposed work zone. Yes, this is all about the Forsythe Refuge, though I’m not sure it’s behind the holdup, though such a demand is obviously to make certain the refuge isn’t impacted.

Clearly, neither the state nor the Corps can make such a nonsensical “no impact’ guarantee. The Holgate shoreline and the inlet area is always in flux, currently like never before. Nobody, short of the Big Man, can guarantee that nothing negative, shoreline-wise, will come of a channel building. In fact, how can that be said even without a channel building? Might there be a worse impact if no channel is built? Sounds just as nebulous … or absurd, if you’re into that thinking.

In fact, what would/could be construed as “negative” impacts for a shoreline that is decaying in the north section – about to dissect -- and accruing sand at an astounding rate at the far south end? Might it be that certain parties favor the current eroding away of vital Holgate sands, even though such precious real estate is meant to entertain endangered species? Hell, yes. For those folks, there’s a lot to be gained in having the far south end break away into a highly-convenient other-island exclusivity – at the expense of the state-owned beachfront.

But there lies the pathetic paradox. The Holgate shoreline is being critically impacted by erosion – an impact which seems just fine with the FWS – but some sort of guarantee is required that nothing will “impact” the shoreline from a channel building. There’s either some screws loose at FWS, or this is a poorly thought-out effort to quietly kill the project.


Start the season off right. Solid early season flattie on a magicta 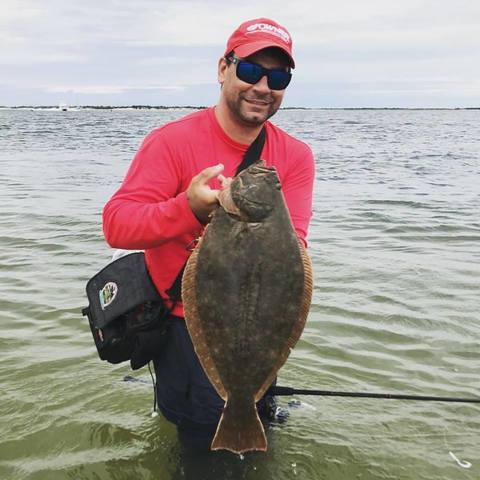 There are some nice Striped Bass around, but the trouble is trying to get out as the weather windows have been pretty narrow this Spring, especially for weekends.  There are plenty of Bluefish around, and now that Fluke has opened it gives another viable option.  I tried a few locations in the back, but the recent rains have made for some serious snot-grass.  The trick has been finding cleaner water and frequently cleaning off your offerings.  It’s been a tough go as of late with multiple cancellations due to poor weather, wind, and sea conditions.

This past week I did manage to get Jim Bennet, his son Michael and Frank Baer from Media, Pennsylvania for a 5hr Ocean/Inlet charter. With the guys game for anything that swam, we started working close to home with the sight of birds on Spearing and 3 to 5 pound Bluefish. After moving on from the Blues, we decided to look for marks and trolled spoons for about an hour with two good-sized knockdowns. Unfortunately, we couldn’t come tight and with daylight waning we headed closer to home. The guys finished trip hooking up with 8 to 12 pound Bluefish on both live bait and artificials. Michael recently graduated from Lafayette University with an engineering degree so “hat’s” off to him.

Later in the week, I had the opportunity to do a quick 2hr recon trip with Tom Duralek for Fluke after work.  Although we had to deal with some dirty water and steady winds to 20 knots, we ended with 1 keeper to 21 inches among a bunch of short fluke and some sea robins. Tom lost another nice one boatside, so they are definitely in the backbay areas.  The west side of the bay had some decent water temperatures up to 68 degrees. The conditions were pretty tough (dirty water & wind against tide), but at least managed to pull the 1st one of the season.

With my son's baseball season winding down, I have weekends and weekday afternoons available through June 18th, and starting June 19th will run 7-Days a week until September.

Nice use of spent mussel shells. — at American Mussel Harvesters.

What is this fish thinking right about now?! 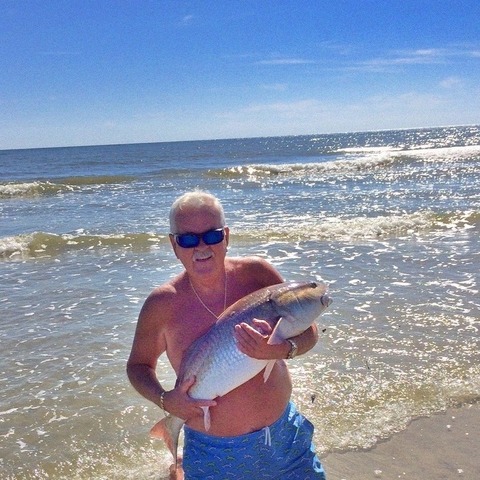 (I believe that's Pierce with the dog shark.) 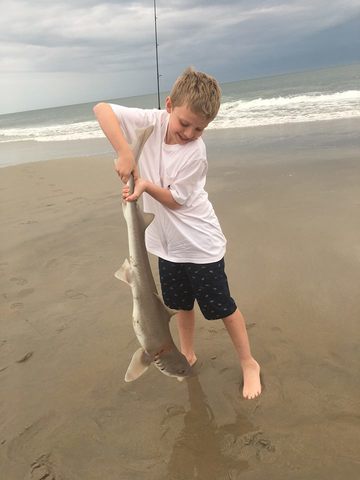