Saturday, May 12, 2018: A far more decent day than was first forecast. Looks like T-storms should hold off until well after dark

Saturday, May 12, 2018: A far more decent day than was first forecast. Looks like T-storms should hold off until well after dark -- though there could be some nasty-ass storm cells in the mix. Tomorrow looks to be windy-ish, swinging to the east to northeast. This could make the BL South Jetty a rougher go than today. It will make for some good bayside bassing tomorrow night … when I get a slight break in schedule to wet a night line.

It looks like Harvey Cedars will be getting dredged upon much of the summer, per latest schedule estimates. I'm hoping we can shift our beach volleyball fast enough to avoid to sidestep the limited beach closures that comes with Weeks Inc.'s spraying of sand. Per The SandPaper -- found online at https://thesandpaper.villagesoup.com -- work in Cedars will begin on or around May 19 and will progress through the borough -- seemingly south to north -- until mid- to late July. It's prolonged a bit due to some additional sand amounts being worked into the project. Surf City beach fill, the final phase of the project, won't begin until late July or August. It's not a big area in SC so it shouldn't take a ton of time, hurricanes permitting.

Channel markers are finally being placed in the newly dug Little Egg Inlet channel. I hope to get an aerial photo of them when in place. Any of you pilots going up for a fun flight any time soon? Oh, don’t look at me to tag along. I’m grounded by nature. Just nab me a look-down shot, please. Black drum are in and around Little Egg Inlet. Per natural inclinations, they come in waves. Unlike weakfish and other concurrent arrivers, these drum usually show first with smaller fish, larger ones later.

I was chatting with a fan of black drum fishing and he sang the high praises of shedder crabs as bait. Not for nothin,’ but I cast shedders toward my mouth and not the mouth of fishes. OK, I might ponder using natural shedder oil on a base meat, like clam. 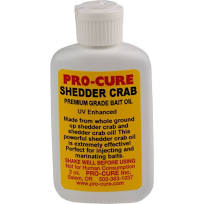 Scratched out another catch today!! Blues and Bass on light spinning tackle!!

World Migratory Bird Day, May 12, 2018. What better Ambassador than the red knot! According the the American Bird Conservancy "The robin-sized Red Knot is a miracle of migration, flying more than 9,000 miles from south to north, then back again". Photo taken 04-11-2018, Reeds Beach, Middle Township, NJ.

The bigger a female fish grows, the more eggs she lays — disproportionately so.

That's the conclusion driven home in a report published Thursday in the journal Science. Biologists at Monash University in Australia and the Smithsonian Tropical Research Institute in Panama gathered egg data from 342 fish species across the world's oceans.

At the extreme end, the vermilion snapper, Rhomboplites aurorubens, had a 400-fold difference in eggs between the littlest and biggest mama fish. A small female snapper lays around 4,000 eggs. A whopper of a vermilion snapper can deposit eggs by the million, study authors Diego Barneche and Dustin Marshall, colleagues at Monash University, told The Washington Post.

This research won't come as a surprise to any field biologists who work with fish. Mark Wuenschel, who works at the National Oceanic and Atmospheric Administration's Northeast Fisheries Science Center and was not a part of this study, said the size effect was so well known it has an acronym among researchers: BOFFFF, for Big Old Fat Fecund Female Fish. But this work is valuable because a BOFFFF's importance is often tough to assess, Wuenschel said — because these fish are fished out of the population.

In 2017, another team of scientists showed that the fishing industry catches the oldest fish at rates higher than the rest of the population. "You don't even need to be overfishing to get those big old fish to go down," said Trevor Branch, a University of Washington professor and an author of the 2017 report, who was not involved with the new study.

The authors of the new research say it contains an important message for the fishing industry. "Most classic fisheries models don't account for the massively disproportionate contribution that larger fish make, yet these are the first individuals to disappear under even a moderate fishing pressure," Barneche and Marshall wrote in a joint email. "So, fisheries scientists, despite the best of intentions, have been using models that inadvertently recommend overharvesting."

Barneche, Marshall and their colleagues used the example of cod, a commercially important fish. Picture a  large Atlantic codfish: Her scales glisten and her chin whiskers are long. Her 30-kilogram body (66 pounds) is swollen with eggs. Nearby is a school of her little sisters and cousins. They are pregnant, too. But they are smaller, just 2 kilograms each.

When the big fish spawns, her eggs will outnumber the eggs deposited by 28 small fish, the authors of the new study calculated. Put another way, i t takes more than 123 pounds of small cod to lay the same number of eggs spawned by one 66-pound fish.

"It's simple physics," said the University of British Columbia's Tony Pitcher, a fisheries scientist not involved with this study. The longer a fish is, the greater the volume of her ovaries (proportional to her length). Bigger ovaries mean more eggs. That's been very well known for more than a century, Pitcher said.

Less well known, he said, was the corresponding increase in egg quality. Older females do not simply lay more eggs. Their eggs are richer in fat and bigger in size. Based on the "total energy content" of fish eggs — the number, volume and nutrients — a 66-pound mother of cod is equal to even more fish. Not 28, but 37 little cod, per the new study. "All else being equal, more and better eggs means more fish," Marshall said.

If an animal's limb or organ grows out of proportion with the rest of its body, scientists call that allometry. These fish eggs are an extreme example, or "hyperallometry." Fish biologists "have been advocating for this idea for a long time," Barneche and Marshal said in their email, "but our contribution was to show that hyperallometry is the rule, not the exception."

Wuenschel, who noted he is more involved with fish biology than managing fisheries, said maternal effects as described in the paper "have generally been ignored in the past." But, as data accumulates, fisheries managers take note.   "Many recreational species are managed with slot limits," he said, meaning fish that are either too small or too large must be released.

Some fisheries have started to use egg output as a metric instead of weight, Branch said, particularly on the U.S. West Coast. Because fish in marine-protected areas tend to let fish grow larger, the study authors said that regions of the sea inaccessible to fishing boats could be even more important than predicted.

To Pitcher, the message to fishers was clear: "Don't overfish large old females." 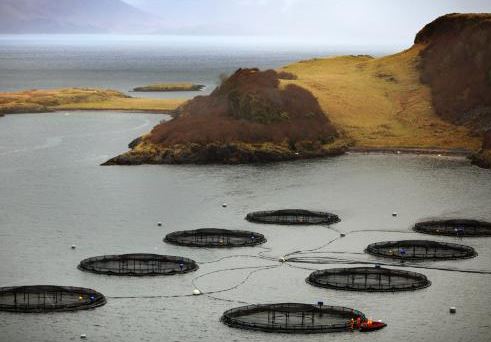 This is Fish Radio. I’m Laine Welch – Farmed salmon is better for you than wild, claims a Scotland report. More after this --

Grundens new Deck Boss boots give you better grip, better comfort and happier feet. Made in the USA.  Upgrade to Grundens at Grundens.com

Falling overboard is one of the leading causes of fishing deaths. A comfy life jacket that fits right into your work gear can save your life. Don’t be a statistic. Learn more at amsea.org

Wild salmon is less nutritious because it burns up all its good fats and oils on its long journey to spawn. That’s the claim by professors at Stirling University in Scotland who studied declines in omega-3 levels in farmed salmon due to increased use of plant based feeds.  It brought a quick reaction from one Alaska expert.

I laughed. It’s a silly remark.

Scott Smiley of Kodiak is a retired professor and noted expert in cell and developmental biology. He says farmed salmon, like other living creatures, are what they eat.

You can adjust farmed fish so that their diets have much more omega 3 and they are able to consume that and store the omega 3s that way. So they can have more, it’s just a question of cost. It’s relatively expensive to do.

Catching wild fish to feed farmed fish has fallen out of favor and that’s forced fish farmers to find feeds sourced from plants or synthetics. The Scottish report said that in 2006, 80 per cent of the average salmon’s diet was made up of oily fish; now it is just 20 per cent. Smiley says most farmers now balance feeds with fish meals at critical times in the fishes’ development.

You know the same thing happens with humans. You don’t rice or beans alone, you eat them together and that’s because there are certain nutritional requirements that aren’t available in either rice or beans, but together there are.

One million smoked salmon meals are eaten in the UK every week, according to the report, and salmon purchases there have increased 550 percent. But even with the lower omega levels, farmed is still better for you than wild the researchers concluded.

It’s hard to tell which fish have the highest amount of omega 3 oils because levels vary by local populations.

So herring off of Kodiak may have very high levels of o3, but herring from some other place may have half of that. So there is variation in natural populations that is really intense.  And it totally depends on what they eat.

Alaska could ramp up production of fish parts that provide high levels of various nutrients. But the current budget crunch likely precludes investment.

So I think it’s going to take awhile before the capability to produce new products that are more exciting in the world of dietary feed formulations for fish.

Meanwhile, the claim that wild salmon burn up all their fats and oils in their travels home brought a final rebuff –

I did contact a friend who is a fish nutritionist and my friend asked if the Scottish researcher was a professor of medieval literature.

Fish Radio is also brought to you by Ocean Beauty Seafoods - who salutes and says thanks to the men and women fishing across Alaska for their hard work and dedication. (www.oceanbeauty.com) In Kodiak, I’m Laine Welch 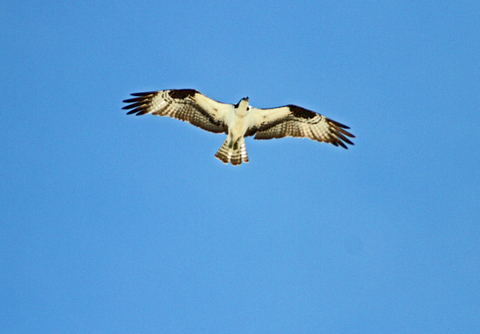 Here's a few looks at what I was seeing. 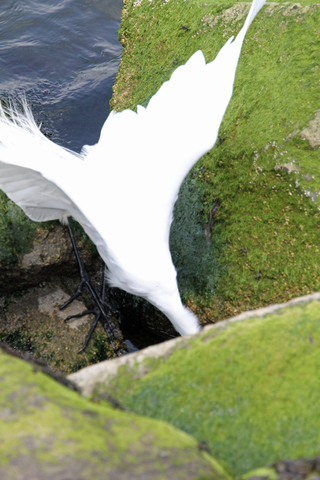 Below: The hard up-top way to walk the jetty ...

And the easy-cruise course to the jetty's end ... Make sure you're not behind this jetty fly-guy during a back swing ... 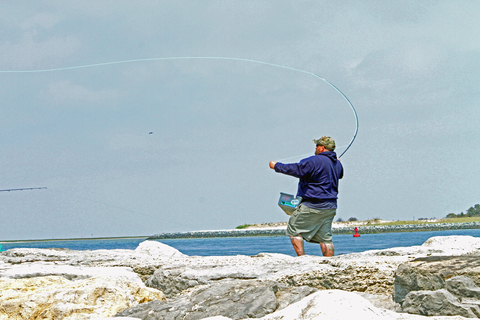 One of very few fish walking off the rocks ... 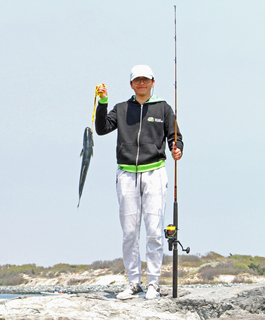 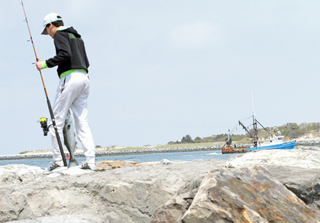 Sometimes you need to use a blind to fool the fish ... 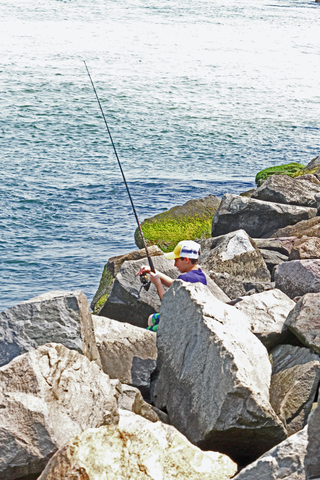 Preventing dogs from sitting on the top of this sign ...