Saturday, June 20, 2015: Boy, you want a treat take a dip in the ocean. No, that’s not a dare. I just took an unseasonable 72 degrees here in Surf City. I use a top-quality infrared thermometer, so you can bank on that Weather Service approved temp. 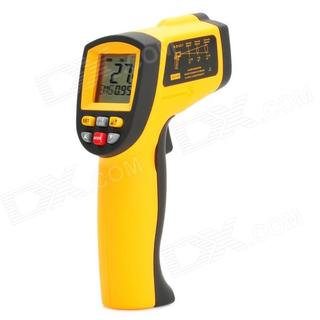 As most my column regulars know, that instant sea warmth is the result of downwelling, the opposite of the notorious downwelling that chills the water to frigidity, via hard south and sometimes west winds. The winds should go more south after TS Bill’s effects leak through. It looks like the bulk of that trapped Gulf  moisture will slip to our north. 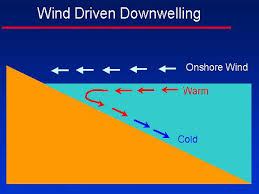 While the onshore winds are a bit testy, the subdued lighting (clouds) are keeping fishing conditions ripe. There is a modest amount of radio chatter but very little drama, shot of an occasion “Got a couple in the cooler.” I did hear a couple mentions about how warm the water has gotten.

Walt reports from, the rocks: “I decided to try shrimping today based on test pulls last week. Nice showing of juvenile fluke and shrimp in today’s pull. Hit the north jetty and setup.  Three strange events for this trip: Watched a turtle navigate and cross the rocks on his journey seaward; A guy was livelining a bunker on the inside of the monument and the resident tower osprey decided the bunker was his and swooped down numerous time trying to grab the easy offering. The fisherman prevailed but the bird kept circling waiting for another chance; Hooked into a real nice 7-8 lb blackfish. When I got him to the boat I noticed what looked like a red tag or something in back of his head on the top. It turned out not to be a tag but a big divot of flesh missing and bleeding bigtime.  I did not see Mary Lee follow it up but I’m guessing a smaller sized friend had blackfish on his dinner menu. 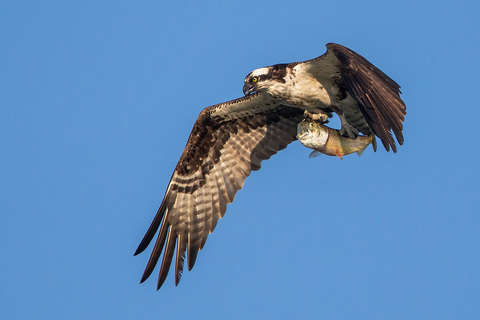 Beautiful morning of clouds and gentle NE wind to hold me at anchor.  Finished with two short bass.” 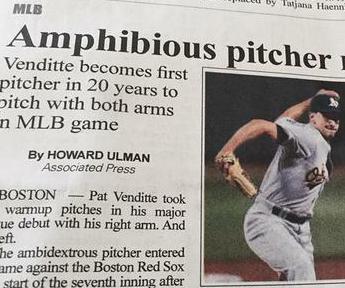 Here’s a corrected version of my take on the “amphibious” Oakland A’s pitcher.

AMBIDUMBEROUS: I got an S-load worth of emails from folks wanting to make sure I saw the insane malapropism put forth by the now inconsolable journalists at the East Oregonian newspaper.

Hey, it’s a laidback, Pendleton, Oregon, newspaper, with a boonies texture to it. Just this week its top headline reads (I kid you not), “Wheeler County ranch hand rescued after two days pinned under ATV.”

Could something as innocent as calling an ambidextrous pitcher “amphibious” be an earthshaking error?

Oh, yes, especially when one of the major dailies to hop on the East Oregonian slam-wagon is none other than Bob and Carl’s immaculate Washington Post. The President’s Men newspaper ran with a large-type headline, “Newspaper calls A’s switch-pitcher Pat Venditte ‘amphibious’”

An entire Post story mocking another fellow newspaper? It’s obvious it has become a paper-eat-paper world out there.

Thousands upon thousands of other hungry publications, around the entire planet, either snottily or comically went after the semi-understandable headline error. I hope they all realize that there but for the grace … They also had better realize that they’ve now opened the savage eyes of public scrutiny to their own papers. Hell, heretofore, copyeditors should begin demanding imminent danger pay.

If I’m still at the East Oregonian after the humiliation smoke clears, I’m subscribing to every publication that went whole hog on my headline snafu. So much as a misplaced comma by one of those papers and it’s Katy bar the payback doors.

As is always the case, I want The SandPaper to take the high road – and not harp on that insanely hilarious, how-could-you-miss-that, have-they-legalized-pot-in-your-town, even-spellcheck-is-laughing, blunder by the East Oregonian. Instead, I’ll be one of the only publications to offer part of the public response issued by the paper’s editor. “Sure, we’re a little red in the face. It’s one thing to have a slip of the tongue, it’s another to put a mistake into print, and it’s still another to see that mistake splayed across the World Wide Web. And to think: Just a few weeks ago we were Internet heroes, showing the courage and temerity to publish a letter about farts. Now, we’re lowly Internet zeros, publishing unconsciously about frogs ...”

Whoa, back up. Frogs? Agreed, they’re amphibians, as in amphibious. Also, they’re ambidextrous – as far as anyone knows. But, dude, they’re hardly baseball pitcher material. Human-sized frogs would surely rock as basketball players, dominating in slam-dunk contests, by jumping clean over the backboard – starting from the balcony seats. The only way a frog could be a baseball pitcher is if it was allowed to hairspring off the mound and literally hand-deliver a pitch to the catcher – hoping somebody like power-hitting Giancarlo Stanton isn’t at bat. “There you go, Mel. That’s what it looks like when a frog holding a baseball is hit over 400 feet into the stand. … No, it’s definitely not a pretty sight, Mel.”

AMBIDEXTEROUS CREDIT DUE: Lost in the East Oregonian headline snafu is the truly mind-boggling ability of lefty/righty Pat Venditte. Imagine having the capacity to pitch both left-handed and right-handed, with 95 mph speed and corner-painting accuracy? However, not to be overlooked is the fact he can swim underwater for 100 yards, eats insects by snatching them out of the air and hides under moist logs when resting. 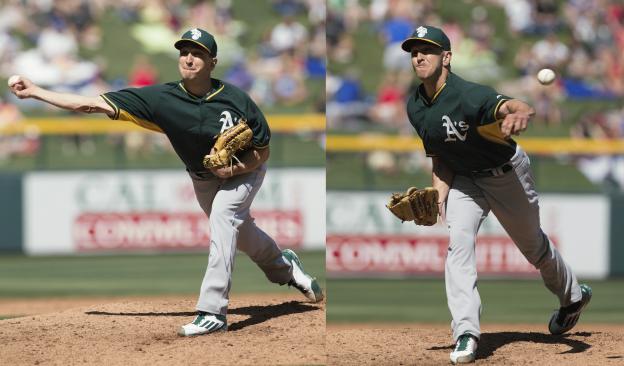 OK, so maybe the East Oregonian put me up to that.

Hey, it’s not easy being amphibious and ambidextrous. And, what if Venditte had one of those insanely over-critical fathers, like an ambidextrous fellow I knew as a kid? When my friend’s dad was first told that his boy was ambidextrous, the dad just growled, “That’s because the kid’s too lazy to decide which hand he should use.” Good old dad.

I’m actually jealous of Venditte. As I kid, I was ambinondexterous: I couldn’t do squat from either side. The first time I ever played baseball, they asked me if I was right-handed or left-handed. I answered, “Pretty much neither.” I proved that when I was batting. It didn’t matter which side of the plate I was standing, all a pitcher had to do was go into a windup and I’d throw my bat into the air and run for cover. I’d be under the bleachers, all, “Did I strike out yet?”

I just thank my lucky stars for surfing. Now there was a sport that couldn’t care less that I was ambinondexterous. It just invited me to get on a surfboard, as best I could, and get out into the waves – any damn way I felt like getting out there. No rules, dude. Sure, there was some obligatory floundering and flailing about at first. But, before I knew it, my right and left arms simultaneously discovered they could paddle in cahoots. In nothing flat, I had paddled into the line-up and was lovin’ life – with none of them stinkin’ amphibious pitchers using either hand to throw baseballs at my head.

FIY: A malapropism (also called a Dogberryism or Cramtonism) is the use of an incorrect word in place of a word with a similar sound (which is often a paronym), resulting in a nonsensical, often humorous utterance.

"It is beyond my apprehension."
Danny Ozark, baseball team manager They bite, they carry deadly diseases, and most of us hate them! But mosquitoes don’t just make you itch. Because they infect people, pets, and livestock with serious deadly diseases, such as malaria, dengue fever, West Nile Virus, chikungunya, and yellow fever, mosquitoes are often said to be the deadliest insect on earth.

This year National Mosquito Control Awareness Week is June 21 to June 27, 2015. The American Mosquito Control Association (AMCA), an international organization of nearly 2,000 public health professionals dedicated to preserving the public’s health and well-being through safe,environmentally sound mosquito control programs, was established in 1935 to educate the general public about the significance of mosquitoes and theimportant service provided by mosquito control workers.

Marsha Luna-Grover, a licensed owner of The Mosquito Authority, #1198, a Brick-based mosquito-repellant service for Ocean and Monmouth counties, provides information on how to minimize mosquito egg-laying sites or breeding grounds around home, identifies trouble areas, and sprays outdoor spaces so people can enjoy picnics, pool parties, barbecues, and other outdoor activities.

Lunar-Grover explains, “Mosquitoes don’t breed in shrubs; they breed in standing water. Check your gutters for any clogs and debris to eliminate standing water. Kids’ toys may gather water after rainfall so turn them over. Also change bird baths every seven days. Mosquitoes -+typically enjoy resting in moist shaded areas so we recommend maintaining shrubs, keeping the lawn trimmed, and removing any leaves left behind from fall and winter months. These are just a few of the helpful tips that homeowners can do to help alleviate mosquito breeding grounds and habitats.”

The Mosquito Authority suggests spraying every 21 days. “Once we spray,” Luna-Grover says, “you don’t have to slather yourself in mosquito-repellent products. You don’t have to use citronella. You just go outdoors and enjoy your backyard.”

According to the AMCA, “Bug zappers are useless against mosquitoes. Studies have shown that less than one percent of the insects killed by zappers are mosquitoes or other biting insects. The devices attract and kill beneficial or harmless insects, like moths, and have no effect on the overall mosquito population. Electronic repellers have also proven ineffective in scientific testing.”

Check this out ... What frickin' dedication! .... http://www.youtube.com/watch?v=IVeL7tO9QF4&feature=youtu.be

A kayaker off the coast of Ocean City reeled in a 6-foot shark on Wednesday night.