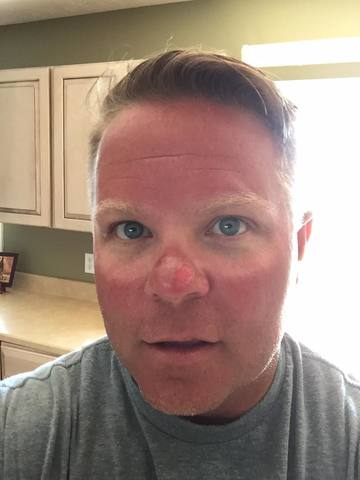 Saturday, June 18, 2016: It was a somewhat wonderful day on the beach, looks-wise -- though a gal called the police on us for playing volleyball on our regular Harvey Cedars beach, where we’ve played for 25 years straight. What’s more, she called after she left the frickin’ beach.

We eventually moved off under the pressure of authorities but she’s irremovable inked on my s*** list.

You got a problem, come and talk it out. I absolutely respect others taking a stance contrary to mine. That’s my job description. Even if things get hissy to the hilt, when the spittle settles, it’s often ended with "That's that" -- and even a tenuous handshake. Things are soon/eventually forgotten. It’s the LBI way of doing it since I can remember.

Call the cops and that’s all she wrote … conciliation-wise. The conflict is etched in jetty rock. The most troubling thing is Lady Cop-caller saw us setting up and instead of coming over at the onset and simply asking if we would move a bit – we would have – she allowed us to completely (and tediously) build our court. She then sat and fumed. Believe me, I could tell at even 30 yards away. It sure seemed she was actually well-practiced at contriving fume scenarios. As proof, her friends came down and sat, logically enough, down near the water. But instead of going to where they were, she vindictively sat in the hot sand zone. That’s just looking for trouble.

I should note here that virtually everyone in our volleyball group is an LBI homeowner, some of the highest order -- if you get my seven-figure drift. So any arrogance she might have based on the famed “I’ll have you know, we own a home here” flies out the double-insulated Anderson window.

I bring this up to vent and in hopes that maybe there’s a lesson to be had here, namely, to nix the cop call and talk out problems -- otherwise they can linger long and hard. Locals here have long memories. Things went south way earlier and harder than I thought.  I knew it was best to get fishing in early but thought the winds would go null instead off quickly swinging south with gusto. Fishing pressure was still up there within the inlets. I actually haven’t gotten many early reports – I get far greater real-time input during the week, though I also after-the-fact weekend reports all week long. I do know of a couple nice fluke, per radio chatter, however, I also got “Only fish we caught” comments to go along with those top-shelf flatties. 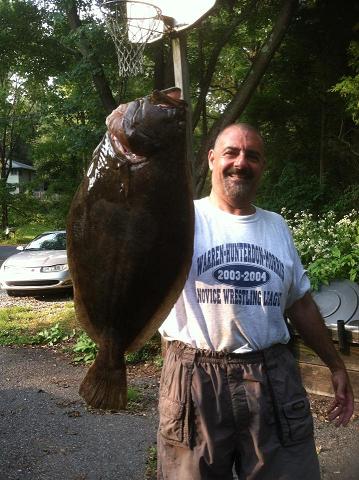 I’ve never seen so many fluke in the 10-pound range being caught. Such a catch used to be media-alert material. No longer. Now, 12s and above are the headliners.

I wouldn’t know what to do if I ever caught a 12-pounder. I’m serious. I don’t think I could keep it. I know I couldn’t. I’d much rather have two six-pounders to invite home. 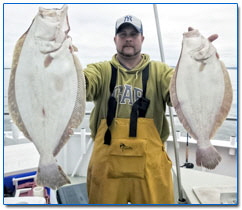 Doug Lee from Fairlawn, NJ had the pool with a nice 6-pound Fluke

By the by, it took a while but I finally got a taste for fluke sashimi.

As most folks know, sashimi is the raw fish … all by itself. When rice and other condiments are added, it become sushi. Although cooked fluke is famed for a low fishiness taste, the raw is the opposite. However, I dip very thin slices into a dip made out of wasabi, soy sauce, crushed chives and a surface gloss of sesame oil. Delicious – to the tune of half a pound down and I'm lookin' for more. Remember that song line: “I think I’m turning Japanese – I really think so.” 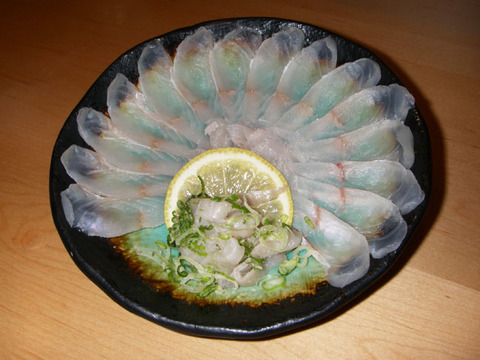 The bassing has gone a tad quiet in the surf, though I think the boats are still on them to the north. Radio chatter goes numb when it comes to bass-speak. However, L.S. showed me a photo of a beauty he nabbed this a.m. He preferred I didn't show the fish since he knows the stink about keeping even a legal striper. And he's not the only angler who is now mum on what is kept. The C&R folks are freer with pics, providing I announce they released the fish. 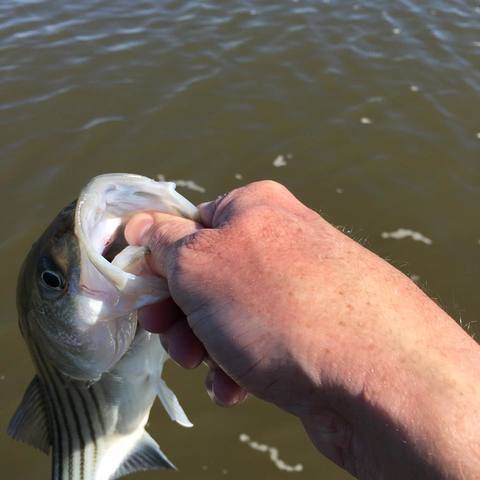 Confused about your volleyball story. If it's a legal activity tell her to pound salt. If not you were violating a local ordinance. Seems pretty cut & dried to me.

Totally legal ... 25 years proof of that. But can't tell the police to pound sand. They're just doing their duty -- to a lone complainer. We've relocated ... for the next 25 years.  I'm sure she'll find something else to call in about -- until even the police go the "pound sand" route.