Saturday, June 11, 2016: Got crazy busy, what with work and exploring the outback. Holgate replen to stop at Wooden Jetty.

Dredge update: The planned replen up to the refuge border (submerged jetty) is OFF. It will stop at Wooden Jetty. This is due to plover presence just inside the refuge. 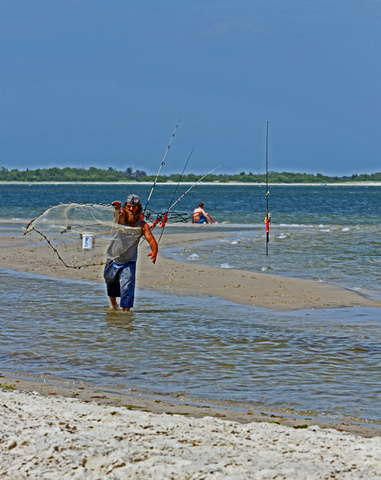 Saturday, June 11, 2016: Got crazy busy, what with work and exploring the outback. What’s more, the winds haven’t been overly kind to anglers. Today’s southerlies were honkin,’ as will tomorrow’s westerlies – and the coming week won’t be a wind bargain. Look for west winds pushing 35 mph in gusts until midweek, then fairly brisk onshores.

In fact, I’m seeing unstable weather from Wednesday toward weekend, with some quite cool night air temps. Hey, cooler temps makes the honeysuckle smell even better.

Sadly, late freezes this spring really wrecked many of my best feral blueberry bushes. I checked on some and half the plants were void of fruits. The farm plants are hardier -- and protected on cold nights. Those Tabernacle Pick-Ur-Own crops will be just fine for the picking .... relatively soon. Right now, it's strawberries. Crop is good but the flavor middling, based on the few fields I've tasted. Maybe they just need some hot sun -- like tomorrow.

Ocean temps are near 60 all the way out to the Barnegat Buoy, 62. Oddly, not much further out, water temps are mid-70s. I guess that means something to big game fishermen, even though there won’t be offshore fishing winds any time real soon.

I'm seeing some singular doormats coming out of areas just inside Barnegat Bay. By that I mean catches are usually one and done. Still, it shows the better flatties are out there, just not overly aggressive. Jigs and teasers seem to be the best bet if you want that one take-home fluke. With bluefish disappearing, jigs with plastic can be used on lighter line. The "creeks" mainly ((BB, BI) to High Bar have been very slow on the drift, in fact, I'm seeing better takes from bayside beachlines. The main fish I’m seeing in the surf and inlets are small stripers with something sweeter occasionally showing. Once and again, there are blues, 3- to 4-pounders. 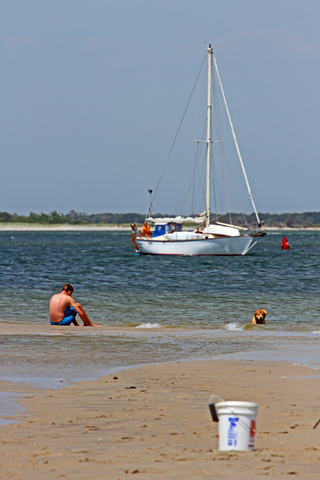 Here’s a pro report: Yesterday (Friday) afternoon e started our trip out in the ocean off of Seaside looking for the big stripers. On board were

Joe and Crystal Roccia of Bellmawr, NJ and Steve Pressler of Wayne, NJ. We were trolling bunker spoons and after two hours of no action we throttled up to return to Barnegat Inlet and fish the bay. We nchored up in Oyster Creek channel, put out some clam baits and went 2 for 4 on 14 pound stripers. That saved our trip.

Today (Saturday) I had Patrick Kerrigan and his son Christian along with their friend Dan Cinotti, all from Virginia . We broke Barnegat Inlet early, made a left (as always) and cruised close to the beach looking for pods of bunker. Made it all the way up to the Seaside Piers without finding any bunker so we swung out to the deep, 60 feet of water and put out the trolling rods.  About an hour in, the center rod with a bigMojo lure gets hammered. Fifteen minutes later, Dan decks his 38 pounder: https://youtu.be/y8-ClE-07lY Half hour later the same rod and lure goes   off and Christian adds a 25 pound bass to the cooler. An hour and a half intermission with no hits or runs and the white #4 Tony Maja  spoon in the starboard out rodder is screaming.

A 43 pound striper for Patrickto top off our catch: https://youtu.be/-EMKsu2d8jYJust then, the forecasted 20 knot southwind came up and we headed for the barn.

I have an Open Boat sailing at 4AM this Monday, June 13. Returning around 10 or 11 AM. Well be headed to the same area looking for bunker to snag in the early morning and then switching over to the troll for the finish. $175 per person, 3 people max, all fish are shared. Also running afternoon trips leaving at Noon or 1PM on Wed-Thurs-Fri, June 15, 16, and 17. Returning 6 hours later.  All of these dates are also available for your private charter.

Patrick Kerrigan with his 43pound bass that he caught on a Maja bunker spoon off of Seaside.

Hooked up with a tree swallow in the Pines today. I sat on a swamp stump and admired its water dips, to grab insects. It was so fast I only managed one discernible (reflective) image -- despite loads of shooting. Then it got a bit personal. The swallow landed very near where I was sitting. It coulda gone anywhere. It then meticulously preened itself, seemingly showing off it’s fine blue colors. The entire time it constantly looked over at me. Then the oddest of all: it took flight and came right at me. Photo kind of shows it. I mean it passed within a foot of my head. I really don’t think it was angry, maybe just showing off. Swallows are a bit cocky like that.