Below: You know as well as me he's somehow gonna catch effin' bloody hell for this ...

Below: Hell, even I don't know what I would do in this instance. Maybe I'd even nonchalantly look on like the guy on the right.

Saturday, July 18, 2015: Turned into a mighty sweet day out there. Hey, we’re getting so used to wind that we just kinda go with the wind flow. The winds should go a bit westerly tomorrow, which means we’ll feel the heat pump out of the south tomorrow. Hopefully it won’t be enough to require bug spray under every beach umbrella.

The drop off the winds late today might mean a period of lighter, easily fishable winds by morning. Lots of folks wanting to wet line so get up early to make sure you get a decent session. I see the winds coming back around SSE later in the day.

I’m hearing the bay is loaded with snot/slime grass over large areas, especially near the west of The Dike. It seems to be more than just our usual showing. I’ll have to check to closer tomorrow. It is likely decaying algal material. While it is not a brown tide, it could still be a harmful algal bloom (HAB). We’ve had some major rainwater runoff in recent weeks. This can introduce nasty, mankind-related chemical compounds into the water, easily capable of setting off blooms – quickly.

I also got a couple/few fishing reports – folks looking for fish other than fluke – about hideously lousy angling. I throw these downside reports in because they are real as rain – for the folks who got skunked. Disturbingly, some very qualified anglers are seeing suckacious fishing. I hate to rub it in but just imagine next year when fluking is reduced to a pot-luck fishery, meaning you had beet come across some doormats – that’s assuming management goes with larger minimum size and not a midsummer-only season.

JERSEY LOVES DETROIT: Not that long ago, I saw a video of a lady gray seal pulling ashore in NJ, with folks swarming around it. I had a sense something wasn’t quite right when the obviously fully healthy pinniped allowed itself to be petted by passing beachgoers, seemingly enjoying the attention. Had somebody thrown it a ball, it would have surely gone Barnum & Bailey with it.

Below: Who could resist a friendly face like this???? Below: Bob Schoelkopf is a savoir to many a wounded or sickened marine mammal. 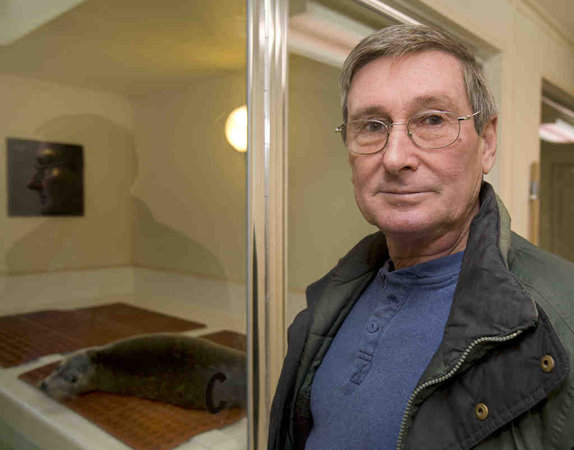 Bob knew something was all too unnatural with such a hands-on relationship twixt seal and human admirers. First, it was an illegal liaison since humans are not supposed to even approach marine mammals, much less get all rubby-dubby with them. What’s more, the seal committed a marine mammal faux pas by taking up with what is essentially the enemy.

Below: She's playful, too: 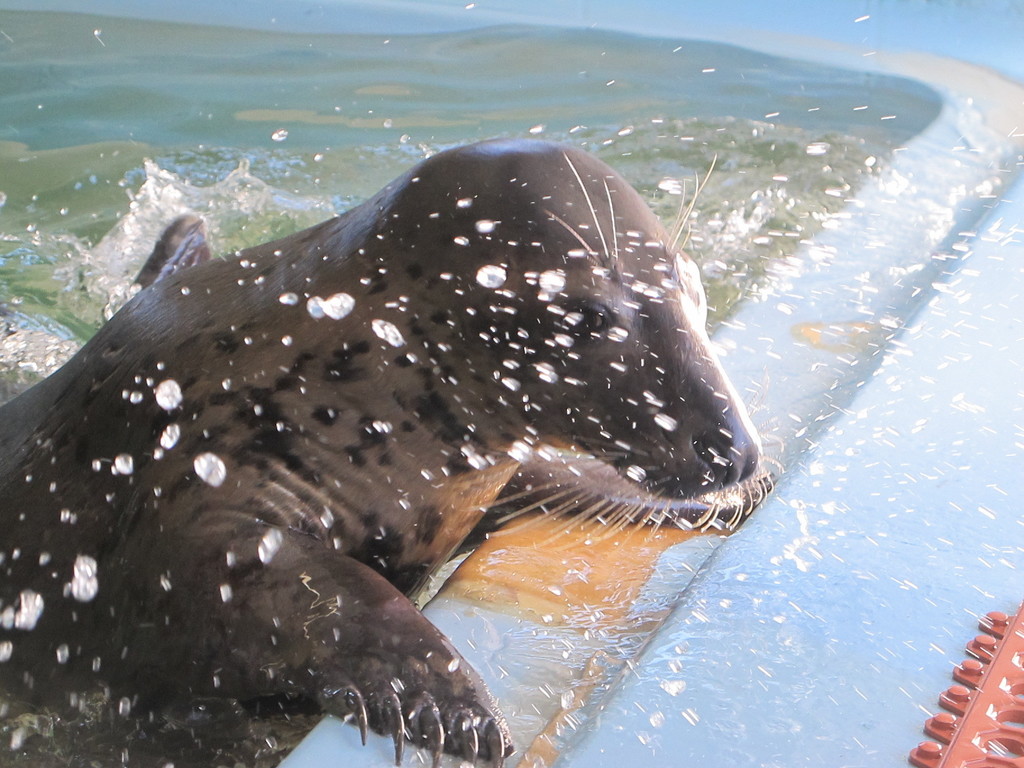 For its transgressions, the seal was taken into custody by stranding center personnel. It was soon discovered that the misbehaving seal was hopelessly attached to humans and no longer wild at heart. It was then up to the center to figure out what was truly best for the highly pettable pinniped. With some help from the National Marine Fisheries Service, safe harbor was found – albeit far from the madding sea.

Off she went to the Detroit Zoo. Hey, don’t knock it until you’ve tried it. It’s a very fine zoo with a world-class pinniped section called “Arctic Ring of Life.” (Below) “Any time an animal is given a second chance, even if it is in captivity, it makes our job worthwhile,” said Schoelkopf.

A Motor City contest was held to name the newly arrive girl-seal. For whatever reason, she was named Jersey. I voted for the name Seal – after the singer, not the animal. Nobody got it.

Below: In her new home. Jersey Girl is now being flooded with Midwestern love – and is lovin’ her new digs, shared with her new BFFs: two other gray seals, along with a couple harbor seals.

The only problem is Jersey’s street smarts. Gospel truth. No sooner was she in her new haunts than she figured out how to scam her cohorts out of their daily vittles. She’s now up to 200 pounds.

According to Scott Carter, chief life sciences officer for the Detroit Zoological Society, “She lives with four other rescued seals who have also found sanctuary here. Adored by animal care staff and visitors alike, Jersey is often seen interacting with guests in the 70-foot Frederick and Barbara Erb Polar Passage as she swims above them.”

Now, the only problem is Jersey is trying to set up toll booths at both ends of the Polar Passage. “Toll: One Mackerel.” Hey, you can take the seal outta Jersey, but … 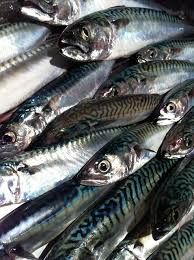 “We’re thrilled to hear that Jersey is interacting so well with the other seals and visitors who come to see them in the exhibit. To know that she’s doing well in her new home makes everyone at the Marine Mammal Stranding Center happy,” added Schoelkopf.

Dogs are beyond cool ...

Below: Female imperial moth. Gorgeous moth but in serious decline in many states, including some areas of NJ ...

Another summer moth. Anyone identify it? 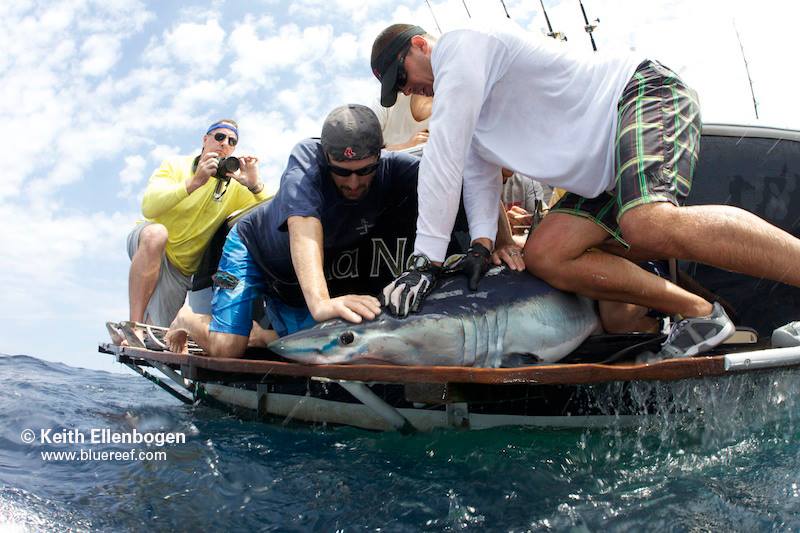 Cate Ells, a 6 ft 6 in
Mako Shark, was legally caught and killed by a commercial pelagic fisherman off the coast of
New Jersey on May 30, 2015. She was tagged July 13, 2014 during the 2nd Annual
Shark's Eye Festival and Tournament, which is an all catch and release shark tournament. This shark was captured by Wendy Benchley, wife of the late
Peter Benchley, author of
Jaws, and tagged on board the
Reel Intensity. This mako shark was named after Wendy’s two granddaughters Catharine and Eloise. We are saddened to see one of our tagged sharks taken but the fishermen were operating legally and this is the reality sharks face in the ocean. “Before Cate Ells was legally harvested in US waters, she produced a remarkable track from Montauk, New York, into theSargasso Sea, and as far south as the Turks & Caicos islands before returning north. Her journey is just one example of how this technology is changing what we know about sharks.” Dr. Greg Skomal ofMassachusetts Division of Marine Fisheries. 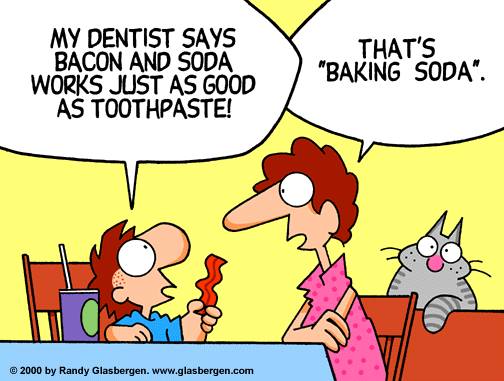