Below: When you realize mom just found out you got into the cake that was "For company."

"Herman! Whadda ya mean you already let the cat in? He's out here crying at the back door." 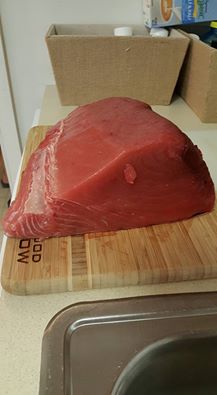 She has had a good teacher but it has taken Sherry awhile to catch her 1st keeper. She caught her fish on gulp right at the pubic dock in Beach Haven.
— 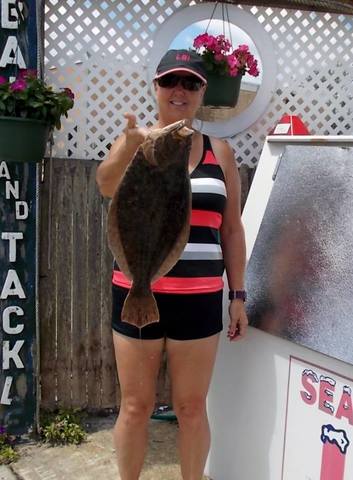 Sunday, July 10, 2016: I’m only able to grab a fleeting bit of keyboard time as I make the most out of this weekend. Below you’ll see my Saturday blog-about. It was swell, despite the overcastness.

Obviously today makes it the tale of two S-days. Not only is the sun making a big splash but the west wind has neutralized much of the eel grass tides of yesterday.

In Harvey Cedars the ocean was clean and 70-ish. The swells were a solid three feet on the sets. Was not great surf fishing conditions.

I’m getting reports of emergency calls for a serious three-boat accident in the bay. Working on details. There was one awful fatality.

Also, a scuba diver with the bends, technically known as decompression sickness (DCS) or Caisson disease. Pain-wise, I’m told it feels like having your body exploding outward. While I can’t even comprehend that, I have no doubt it’s excruciating, Here’s hoping decompression treatment comes in time to save that diver.

The final touch ups have been done to the Wooden Jetty in Holgate. Instead of having a drop-off, there has been some fill-in work. However, I see the old Wooden Jetty wall showing if we keep getting south winds.  For decades there was a drop-off on the south part of the jetties. We never lost anyone over the edge. Of course, the far more swimmable beach to the north should be attracting loads of beachgoers; that ups the ante, so to speak.

There are still kingfish to be had but they simply aren’t everywhere … never have been. They travel in schools. That means they’re naturally hit-or-miss but also mean once you find them you can score a slew of these double-delicious panfish. The trick is to keep a real active bait out there. Like yesterday’s advice about fishing fluke in the suds by keeping baits moving, it’s even more so for kingfish. Cast and retrieve until you find where they are. Then work the hot-bite zone.


Just picked up 5 of these beautiful jigs ready for war tomorrow ... Saturday, July 09, 2016: I’m not sure where the forecasts are coming from saying the winds are south today. They mainly east to northeast. Although onshores are dying off as of this afternoon, they have blown up a decent 3- to 4-foot north swell. Not that many folks are using the waves, though. The skies are quite clouded, which is ideal for my beach volleyball, though our group was just about the only movement on the beach.

The north lean to the wind last night worked to muck up the water, hideously. The eelgrass came in by the bundle loads. While much of it is now on the beach, there are more than enough loose strands to ruin surfcasting. Maybe late-day low tide will clean things bit.

Tomorrow, will be a whole different day, as a west wind kicks in and brings us back to summer reality. The upside is the lack of any a scalding weather for the immediate future. However, I can assure we’ll be sweating it a few more times this summer.

Water temps in the low to mid 70s.

Speaking of sun, in in tomorrow, July 20the will see the mobile skin cancer check-up bus in Ship Bottom; ocean end of Ship Bottom. More on that as it draws closer. Just don’t miss this golden opportunity to have a fairly costly examination done free.

SHARK NOTE: Sharking remains hot. I must also congratulate sharkers on the exceptional care being taken to land and then rapidly refloat/release sharks, ASAP.

I will must offer one friendly suggestion. While opening a shark’s jaws for a quick pic, don’t overdo it. Yes, a shark can open its mouth insanely wide when biting and manipulating food. However, that process actually entails the coordinated use of a shark’s two-jaw system.

The primary oral jaws open and close the mouth. A second set of jaws, called the pharyngeal jaws, are in the back of the throat. They crush food, manipulate it and then guide it toward the stomach.

If you watch videos of sharks eating, you can see this two-jaw action, especially when a shark’s gill region balloons out, as the pharyngeal jaws go to work in a swallowing action.

Anyway, a shark’s oral jaw can be overextended by forcing it open too far. An over-opened mouth can prove fatal if hinges are broken or even dislocated. A shark with a wounded/broken jaw will swim off seemingly no worse for wear but will be unable to feed properly. 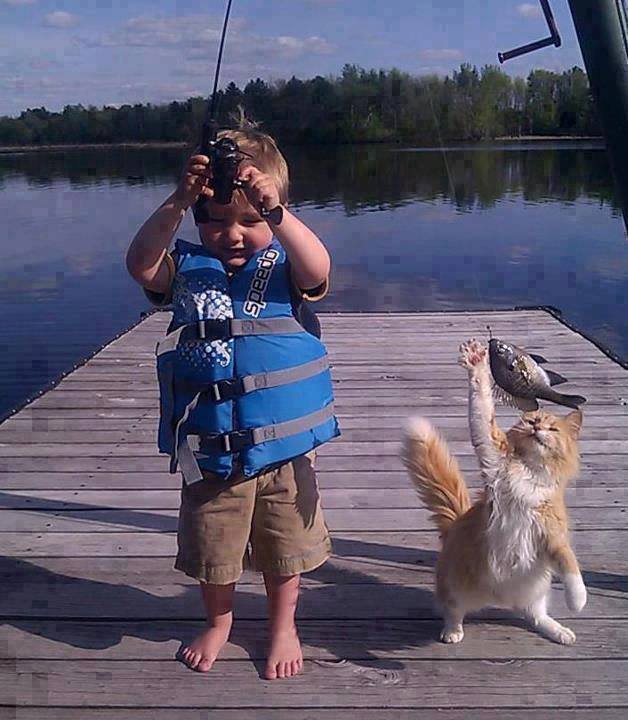 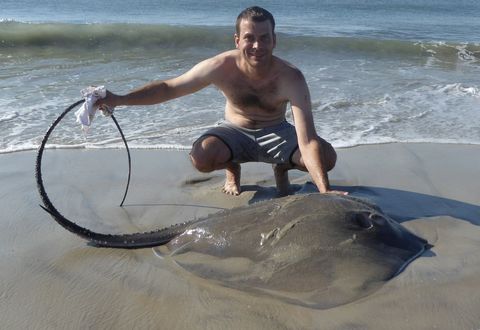 Only a couple small brown sharks this weekend, but the rays were hungry! 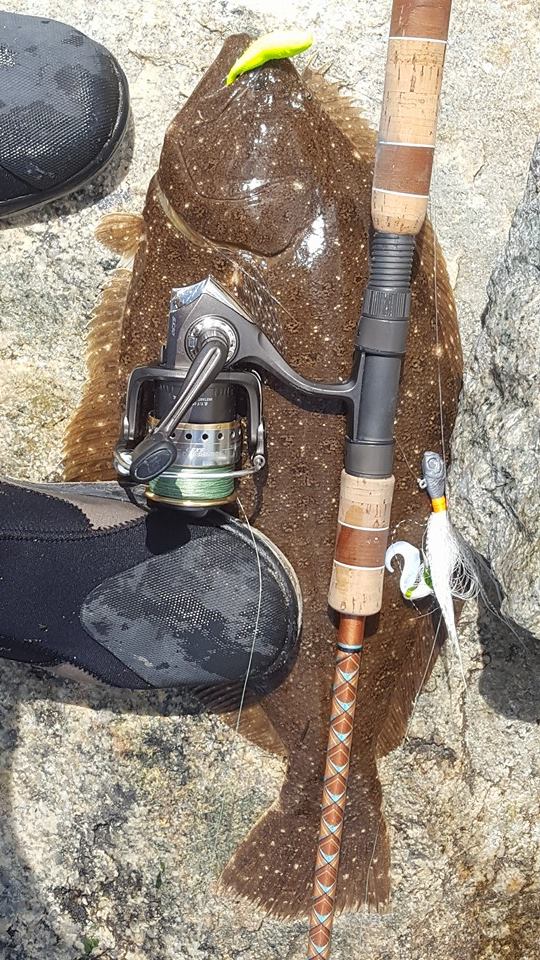 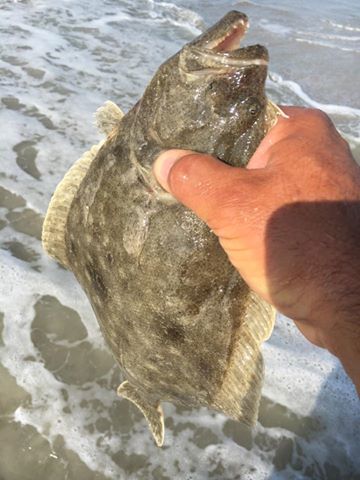 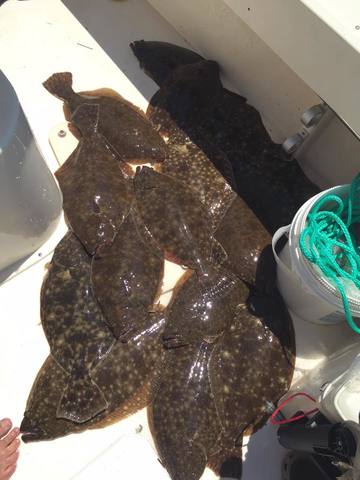 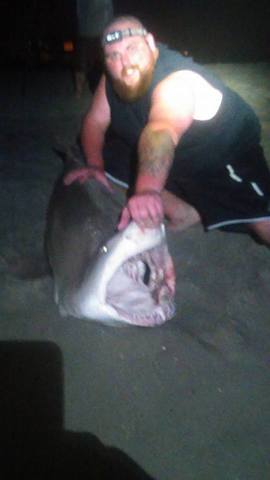 One of two yesterday. On jigs. Def not the best day, but not the worst either. Crowds starting to become an issue. Next trip, we run east.

Below: Yet another reason I believe there is pure art in the making of lures/flies/plugs/jigheads.

Glassy Clown Nymph. My own creation doing well this season. 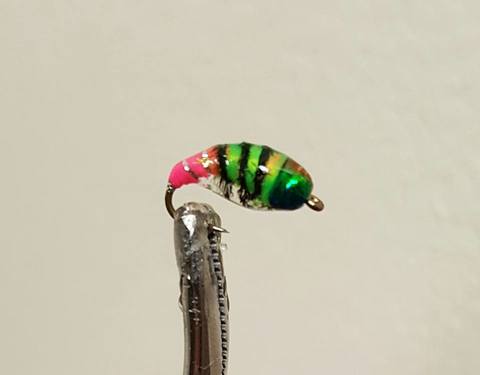 As I always make clear: I take no advertising. When I place items in here that are for sale, it's always because they seem cool, often gadgety. Here's one based on the dozens of smartphone pics now coming in from anglers, often catch-and-release anglers.  Also, thre are likely other brand names. I'm just hyping the concept. 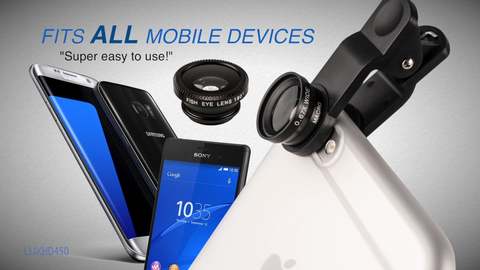 Images produced by our lenses have been tested and found to equal or exceed the photos produced by such top makers as Zeiss, Leica, Nikon, Canon and Sony. We're extremely proud to have manufactured such a high quality product at such a modest price point, thanks to computer design and advanced CCD fabrication.

We have all experienced that candid moment when you wanted to instantly take a picture, and have it look wonderful. Most of the time, we had to keep taking those pictures, and then eventually we gave up because it wasn’t working. With the Lux HD450 it automatically filters your picture to the perfect setting, and works in every time of day including the night.

If we keep pulling fish out of our waterways at this rate, we're going to run out of fish. The Guardian has revealed that due to vast overfishing, nearly 90 percent of global fish stocks are either fully fished or overfished, based on a new analysis from the United Nations Food and Agriculture Organization (FAO). Meanwhile, the Organization for Economic Co-operation and Development forecasts a 17 percent rise in fish production by 2025.

The FAO report,The State of World Fisheries and Aquaculture 2016, demonstrates that global fish consumption per capita has reached record-high levels due to aquaculture and firm demand, with the average person now eating roughly 44 pounds of fish per year compared to only 22 pounds in the 1960s.

Additionally, the report found that people are now consuming more farmed fish than wild-caught fish for the first time. Despite this, UN agency warns that fish from natural marine resources are still being overharvested at biologically unsustainable levels. Global marine fish stocks have not improved overall despite notable progress in some areas, the report said.

For instance, in the Mediterranean and Black Sea, 59 percent of assessed stocks are fished at biologically unsustainable levels, a situation that the report's authors described as "alarming." Not only that, the possible expansion of invasive fish species associated to climate change is a concern in the Eastern Mediterranean.

In fact, as EcoWatch reported, a number of worrying factors are threatening the long term sustainability of the ocean's resources in addition to overfishing. The report, Valuing the Oceanfrom Stockholm Environment Institute, examined the various challenges that threaten the health and stability of our ocean, including acidification, warming, hypoxia, sea level rise, pollution and the overuse of marine resources.

Oceana, an international ocean conservation and advocacy organization, "regrets" the new FAO study. The group pointed out from the report that overfished and fully-fished stocks are at 89.5 percent in 2016 compared to around 62-68 percent in 2000.

"We now have a fifth more of global fish stocks at worrying levels than we did in 2000. The global environmental impact of overfishing is incalculable and the knock-on impact for coastal economies is simply too great for this to be swept under the rug any more," Lasse Gustavsson, executive director of Oceana in Europe, said.

The Guardian noted that aquaculture, which is poised to overtake wild-caught fish as the source of most fish consumption in 2021, is a major industry that benefits trade, employment and diets in the developing world.

According to the FAO report, fish provided 6.7 percent of all protein consumed by humans around the world and offers a rich source of long-chain omega-3 fatty acids, vitamins, calcium, zinc and iron. Some 57 million people were engaged in the primary fish production sectors, a third of them in aquaculture.

"There is an absolute limit to what we can extract from the sea and it is possibly very close to current production levels, which have stabilized over last few years," Manuel Barange, the UN FAO's fisheries director, told the publication. "They have grown a little in recent years but we don't expect much more growth because of the rampant increase in aquaculture production."

"My personal view is that it is quite momentous to have reached this level of production," Barange added. "In the struggle to make sure we have enough food to feed more than 9 billion people in 2050, any source of nutrients and micronutrients is welcome."

Barange also told BBC News that fisheries have a much smaller footprint than other main sources of animal protein.

Oceana, however, said that aquaculture is not the solution to meet the increasing global demand for fish; we must address the unsustainable exploitation of wild fish first.

"The figures speak for themselves. Overfishing will knock wild, everyday fish from our dining tables replacing it with aquaculture and other seafood. Only through sustainable fisheries management and by ending overfishing will we really able to increase fish in our oceans and ensure seafood can be put on a plate for millions of people," Gustavsson explained.