Just read this apropos quote about mallards: "If they weren't so common they would be a beautiful bird." 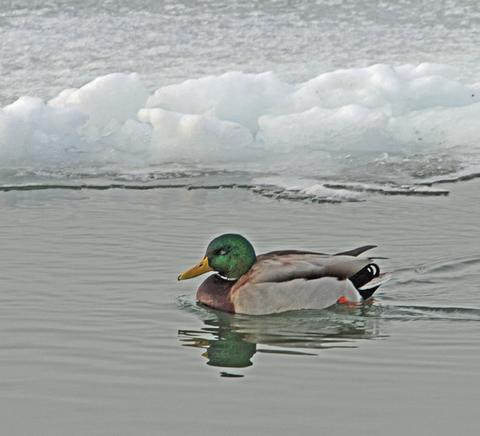 Saturday, January 13, 2018: Out of the fog and into the freezer. We'll surely celebrate spring’s arrival, hopefully before the actual March 21 date. And there’s the pendulum thinking, whereby wicked winters are harbinger of wicked summers … to the nth degree.

I went to Holgate today hoping to catch an ice-flow ice-out, whereby a river of broken bay ice slowly migrates out the inlet, urged on by outgoing tides. Well, it apparently flowed out while I was looking the other way. Not only was there no ice a-flow but the bay water was void of anything frozen. It shed its ice look just that fast, south end. I guess there’s a melt factor mixed in.

I came across what looked to me like either a fully healthy sunning seal or one about to keel over dead from pneumonia. It’s that hard to tell. Here’s a video of the stranded and/or sunning pinniped. I stayed a goodly distance from the youngster – at least it seemed small by seal standards.

The seeming mega-hump on its back is mainly how its positioned. From another angle, the hump looks like typical seal fat. 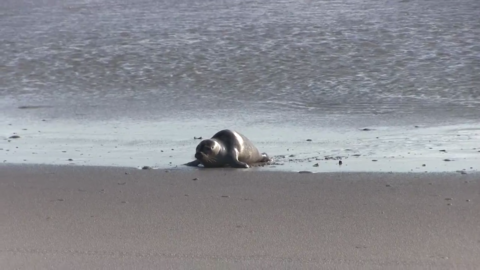 A facial angle of all seals: These buggers always seem to look as if they’re begging for a helping hand, even when they’re far more in inclined to tear your hand clean off if you were to reach toward them.

As I mention in the video, myself or one of the Holgate regulars will soon determine if this is a distressed seal or simply taking a break from fighting the churned up waveline. By the by, I’ve been seeing a few seals in LE Inlet but not nearly as many as in recent winters.

Yes, there are still snowy owls sitting around down on the south end -- as many as three, on occasion, I’m told. I’m kinda out of the snowy owl seeking business. There are so many folks more interested – and far better equipped -- talent- and camera-wise – to photograph them that I pretty much keep my distance. Truth be told, I’m having more fun watching and photographing massive flocks of everyday brant, as my too-many Facebook videos prove. Nonethelss, you really have to check out this emperor penguin-like march/swim I videotaped: http://www.youtube.com/watch?v=mvywVjJU2nI. 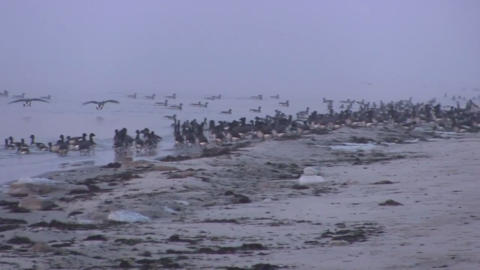 All I want to know: Does this mean I can now freely use the word "shithole" -- and it's derivatives -- in my writing?

A fire aboard the commercial scallop boat Karen L on Friday morning at the Viking Village dock in Barnegat Light damaged the vessel and is being investigated by the Ocean County fire marshal. No injuries were reported.

“The whole cabin is all burned up,” said Mayor Kirk Larson, whose mother Marion is a co-owner of Viking Village. “They had just gotten in at 3 in the morning from scalloping, 50 miles out.”

The Barnegat Light Volunteer Fire Co. got the call at 8:10 a.m. Jan. 12 and smoke could be seen coming from the 60-foot boat.

Attacking the flames with foam, firefighters extinguished the fire in 10 to 15 minutes, “and prevented further damage as best as we could,” Voris said.

Fire company spokespersons said the cause of the fire will not be determined until the Ocean County fire marshal’s office completes its investigation. A location to which the firemen advanced to fight the blaze was above the engine room, in the area of a front berth, firemen said.

Mutual aid responded from the High Point Volunteer Fire Co. in Harvey Cedars and from the Surf City Volunteer Fire Co. for added manpower to ensure that the fire stayed out completely. The Barnegat Light First Aid Squad was also on the scene for support to fire company members if needed.  —M.S.

Yesterday: OK. Is this some sort of winter sting operation in Beach Haven ... or could I have tried to salvage a couple of these?