Saturday, February 27, 2016: Enjoy the day. Sure it’s nippy but nothing we can’t deal with, especially knowing we’ll be drifting toward 60 degrees by weekend’s end. Then it’s pretty nice and tolerable until late next week when there could be a touch – final? – of winter, mainly inland where some whiteness could show. But that’s too far ahead to ponder when there are fun things to be done for days to come.

We have some low tides late today which is well suited to both mud-clamming (surface raking) and beachcombing. It remains an exceptional winter for wash-ups, especially beach glass. While I don’t pick up beach glass, I’m into anything resembling treasure hunting. I really like the beach glass wreaths being made by using a wire wreath form and a glue gun – not to mention an s-load of glass. These window hanging show off every piece of glass. I have one wax-adhesive trepidation, since I’m in the bonding business (though I use spooky strong bonding … and caustic … adhesives my bakelite, glass and brass/bronze artwork). I wonder what will happen if those fairly heavy wreathes hang in a summer window, where temps can get over 100 degrees. I worry about stuff like that. 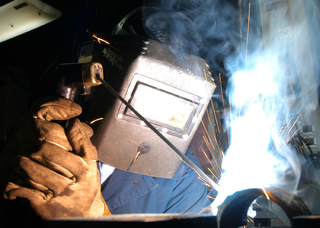 The sand dollar hunting is all-time, in the wake of the beach replenishment. Unfortunately, if you’ve seen one sand dollar. Oh, I still collect them as fast as I see them but the variety left behind by the replen is nowhere near the former beachline fines ranging from sea glass to bone wreck stuff to fossils in marl to Indian artifacts. Sorry, but many of those will be beach treasures of the past, even in Holgate, when the entire beach replenishment is done. Of course, with Loveleadies beachliners fighting the replen tooth-and-nail, there will still be olden wash-ups thereabouts. So, by the loadful, let’s all head there and hawk their “thought-private” beaches, make it the new playland … in a payback manner.

I had a slew of folks ask me about  comment I made about the potential for true treasure should the sands of the Little Egg Inlet area get pumped onto Holgate beaches. No, I don’t know of any specific “gold doubloons and piece of eight” treasures lost in that inlet area. However, the entire length of LBI was shipwreck central, almost up there with the Outer Banks. Sea rescues in the vicinity of Beach Haven Inlet shoals weren’t nearly as numerous as up Barnegat Inlet way. But, having been a treasure digger and diver for a long time, I look at LBI treasure-lost in a more dynamic light. Bones from the two Bone Wrecks can be found daily in Holgate. Those vessels went down off Barnegat Inlet. It shows the transport capacity of the nearshore waters off our barrier island. Yes, I’m fully aware of the lightness of bones, meaning they can travel a long way, quickly. In fact, one of the cooler papers I did in college was on specific gravity, which is essentially how things sink (and consequently) move in water. Even the heaviest gold can be transported great distances just off the beach.

However, that’s not the prime way that things can end up in Little Egg Inlet. Vessels lost from, say, Ship Bottom southward would break apart and entire sections of the vessel would easily be storm-transported southward … until they hit the relative reduction in the ocean’s transport capacity around Beach Haven/LE inlets. I see that area as the final resting place of assorted sunken ship objects, not to mention anything that has taken the LBI north/south express. 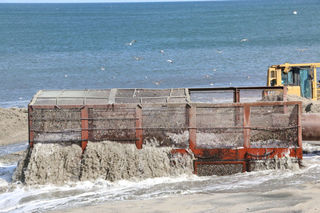 Admittedly, Great Lakes dredges are now filtering material through finer-mesh screening, after the bomb scare caused by sucked up munitions and displaying them on Surf City beaches. 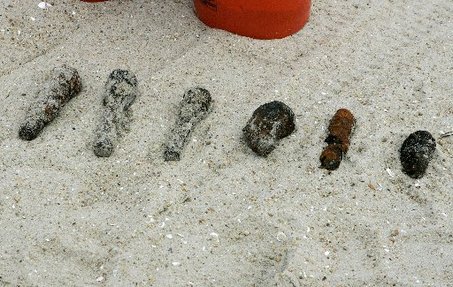 However, I very recently did a telling experiment, surely done by nobody else. I took the largest replen-related sand dollars I found on LBI (North Beach Haven) and laid them over the true-to-size coin photos in my “Red Book US Coin Price Guide” and “Gold Coins of the World.” Eureka! The sand dollars were larger than virtually all gold coins and most silver coins that might have been lost with old local shipwrecks. That means those treasurey coins (not to mention jewelry galore) could easily make it thought the dredge screen mesh.

Hey, to be a true treasure hunter, you have to think and believe like one. Now, if I might interest you in the new line of LBI-tuned metal detectors I’m developing. No, I’m not. I need to also make mention of the proven fact that in the north portion of the possible LEI borrow site lies the remains of Tucker’s Island. As I oft note, the exact coordinates of the island are known due to its one-time Coast Guard facilities. I have to think some residual Tucker’s goodies might be sprayed ashore. “Sprayed” is the sand placement expression used by the beach replenishers. Of course, any Tucker’s-related artifact would be more provincial, as in daily-life stuff. Hey, works for me. I’m not sure if these means anything fishing-wise, but I got word that there is a very nice stock of white perch in the Mullica, though I was also told there I some fyking going on. Not sure about that. I do think that the white perch exiting the Mullica head up our way, since it goes against the grain for spring migration to head south. They don’t. It’s been years since I fished for these truly tasty -- and far cleaner than bass – pan fish. 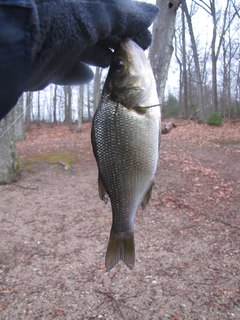 I’m not sure the astoundingly secluded creeks I work in spring are accessible by truck any longer. The last I looked, oversized enduro trucks had plowed puddles in the road deep enough to consume a normal full-sized truck like my Chevy. The hike in would be a solid, heavily-underbrushed mile. Still, I think I’ll give it a reconnoiter look soon since I also use those places to check on the herring run. I told some fish folks I’d keep an eye on this year’s migration of river herring. Last time I went, years ago, I saw virtually zero spawners. This year I have my underwater vid-cam. 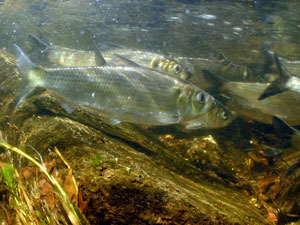 A mini-snake I dug up yesterday ... and gently transplanted. 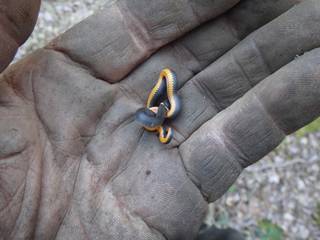 One of the areas most famed bottles. I dug it but that wonderful Old Barney look will likely soon fade/peel away. It's whole, no cracks, though second photo makes it look cracked. 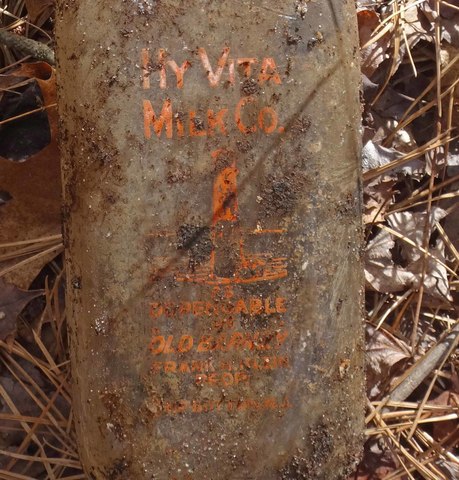