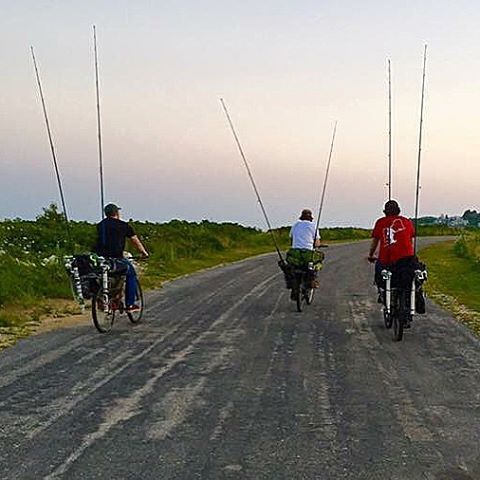 Saturday, August 27, 2016: Volleyballed my brains out today, mainly on the beach. When ocean dive-ins were deemed essential, the ocean was nice but far from snuggly. It tweren’t no 78 degrees, as advertised. The upwelling following the recent south winds has chilled even the cleaner water that has moved in. Lucky if it’s 70 today.

The northeast winds this morning, into the afternoon, were a tad harder than forecasted, though not really enough to blow up much of a swell. As the afternoon wore on, the winds died a bit and offered better p.m. fishing than a.m. Winds should remain light and variable.

Below: Got an interesting photo of remora caught in Barnegat Bay.

I’m betting more than a few of these crafty commensal creatures are loosed from their shark charges with all the catch-and-release shark-fishing going on.

Remora have an oval-shaped sucking organ where most first have their primary dorsal fin. The inside of these organs are very cool, with Venetian blind-like slats that act like suction securing devices. They can detach almost instantly by swimming forward.

When free-swimming, remora have a very poetic undulating motion. While they're very adept swimmers, they greatly prefer a host doing all the heavy swimming.

"Here is the pic of the fish John caught while blow fishing in Barnegat Bay.

I know that Barnegat Bay has a large variety of fish but not like this.  Last Thursday, August 25th, I was fishing with my  buddy, Paul, and besides getting beat up by the wind and waves, we caught blow-fish, fluke, king-fish, sea bass, crab, sea robin and a porcupine fish but no sharks or bluefish.

The catch of the day was an 18" Ramora and a 7" shrimp.  What a surprise!!!  The Ramora makes me think about the size of the shark that dropped  it in our bay.  What do you think?" 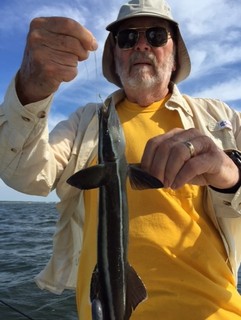 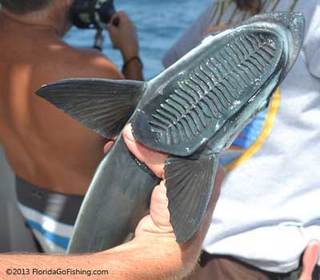 almost as long as I've been born. Joe Baggs and myself order things together and although we mess with each other there is no hard feeling! When I started producing Bucktails last year I took a bullet head that baggs Was using and modified to a short shank hook. I wanted to be a lil different so I started making hackle Bucktails. I was making them for myself 10 years ago and I'm sure many other people were as well! However it kinda got it back on the maps. This last act Stan pulled just shows who he is!! The simple fact he goes out of his way to name a Bucktail that I've been marketing the last few months the FDS series (fuck Dante series) just shows his class and immaturity! The simple fact is not only do I see this but the public eye does as well! Multiple people sent msgs and 2 shops as well. It's only making yourself look bad. One thing I never do is bad mouth another mans product to make mine look better! That's poor business and as pathetic as it comes! Here is some info I received 4 phone calls that stan has called shops that just took me in and gave them shit for it!! Number one it's illegal to do that number two if I was a shop I'd tell him to take a walk and it's no ones business what any shop carries! I think shops should let the customer chose which product they want to fish! So in conclusion I'm going to keep production the best Bucktail I can for all of you guys and worry about myself and no one else! I'm not worried about what my competition is doing no need to worry about what I'm doing!

Below: Random white marlin, via panamayachtandfishingcharters.com Polygraph tests on the big winner of the White Marlin Open have determined the angler and crew members lied about following tournament rules, according to court documents filed on behalf of the tournament.

Polygraphs administered  on behalf of the tournament determined that Phillip Heasley and others crew members of the Kallianassa, which  was announced as having the winning white marlin at the close of the tournament, were "deceitful."

Heasley, of Naples, Florida, had brought in a 76.5-pound white marlin, the sole qualifying white marlin vying for the grand prize of $2.8 million. However, examination of catch logs by the tournament brought suspicion that Heasley and the crew of the Kallianassa had not followed the rules of the tournament, so officials withheld the prize money.

"Subsequent investigation as required by the rules and regulations of the White Marlin Open indicated a possible violation of the rules. Accordingly in an effort to achieve utmost fairness, the White Marlin Open directors met with the independent judges and complete information was provided to the judges for their input with regard to the issue of the potential violation of rules," tournament officials said in a statement Aug. 23.

Additionally, Heasley was determined to have lied when answering specific questions about regulations of the tournament, including whether he had help catching the fish and whether he had passed the sea buoy before 4 a.m.

According to the polygraph, a crew member of the Kallianassa, Kyle Bohannon, was determined to have lied on all of the same questions as Heasley, save for the question on whether the boat had passed the sea buoy prior to 4 a.m. Two other members of the Kallinassa's crew were also determined to have been deceitful during the questioning. In total, four members of the Kallianassa on board during the catch of the champion white marlin all were found to have lied in some capacity about the protocol followed that day, according to the tournament.

While both Heasley and Bohannon had been determined not to have lied when saying he had caught the marlin past 8:30 a.m., in accordance with the rules of the tournament, tournament officials initially became suspicious of Heasley's catch upon reading the catch report from the Kallianassa on Tuesday, Aug. 9. In it, tournament officials stated that the time had seemingly been altered, changed from "8:15 a.m.," which would have disqualified the marlin for being prior to the 8:30 a.m. start time, to "9:05 a.m."

Before the results of the polygraph, Heasley had maintained his innocence, saying the Kallianassa's crew had followed all rules.

“The Kallianassa’s excellent crew and superb captain have always maintained the highest levels of integrity; they will be vindicated and walking tall in the fishing community,” Heasley said.

On Aug. 22, Heasley was notified about the results of the polygraph by James Motsko, president of the White Marlin Open. Heasley denied the request to distribute his prize money among other winning fishermen.

The White Marlin Open has since requested the money be placed upon the court, which has been asked to make a ruling on disqualifying the winner, as well as decide on distribution of the funds. I took Dave on his first shark trip last night. He landed 3 browns and this beast of a sand tiger. Not a bad way to jump into shark fishing.
Andrew DiMatteo 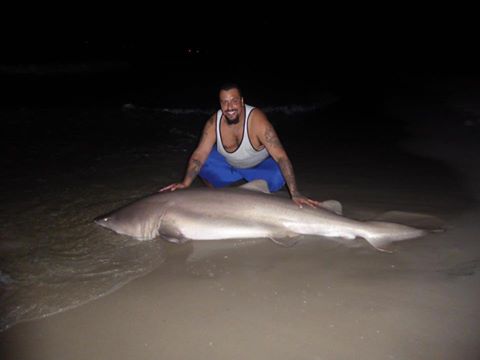 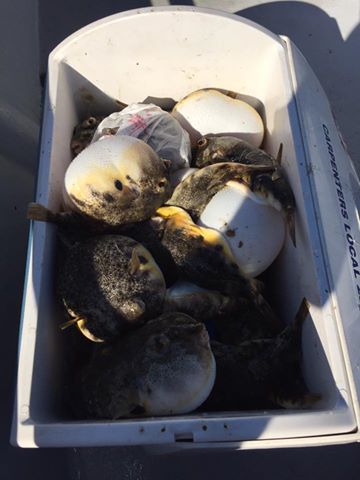 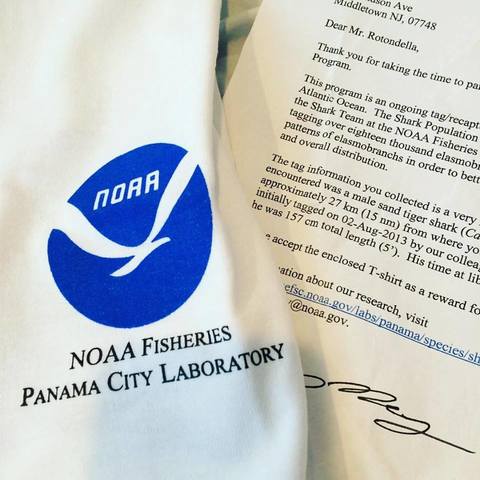 We've been having a blast with our @madd_mantis prototype. This rod isn't in its final stage by any means, but we're working together with David to create the ultimate Jersey shark stick!

Tonight's sunset photo along with a limit catch of quality fluke to 7.7 lbs. 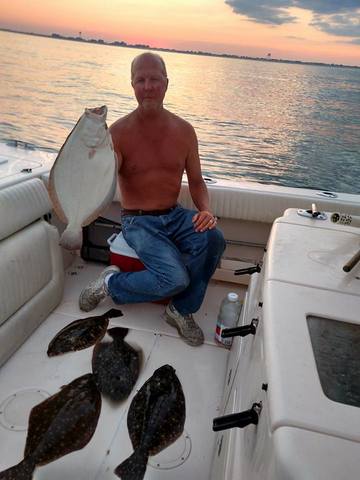 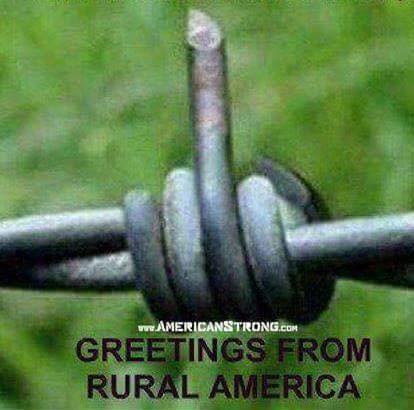 Who is Dante Soriente and WTF is he drinking? Gotta get me some.