Alert: A tricky 3- to 4-foot easterly swell has built rather rapidly from early this a.m. – when I saw 20 to 2.5-foot at most. There is also some beach overwash, whereby high tide waves are washing over wide sections of beach, creating standing water ponds in areas where folks had been dryly lying out yesterday. Not sure where the waves are coming from but they could be problematic as the tide drops and wave-related outflow, possibly as rips, kicks in.

This swell could impact boat anglers outside inlets, near shoals. 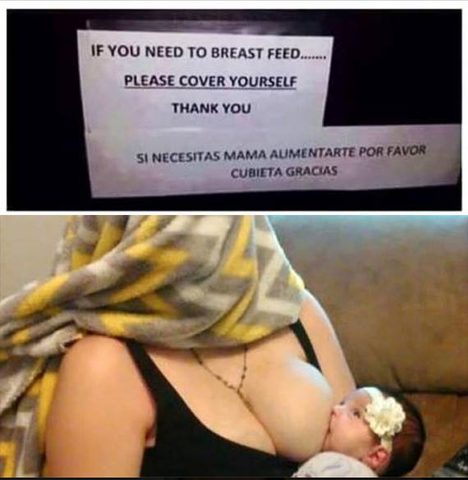 Below: This was Number One on a collection of unexplained photos. While I'm hugely into unexplained things that go bump in cameras,  I can firstly dispel a notion that it's an oil spill ... or a spill of any sorts. It's on the bottom. i'll also nix the sunken "tarp" theory. But dollars to donuts, it's a snaking school of baitfish. I've seen the same meandering look while baiting in Florida. 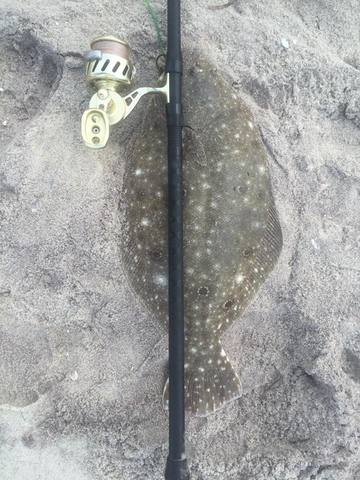 So yesterday I took Mrs Dorris offshore for a 1/2 day. When the Mrs goes fishing nobody else can come, for the sole reason that when momma bear wants to go home we go, and she does not want to have to force the crew home. That being said we had a great day! We broke off a fish early and then landed this fine specimen of a wahoo! I got to fight the fish while Lisa cleared lines and took the helm! Also got a chance to show her some sea turtles and a rare leatherback. But the highlight of he trip was a humpback breaching and feeding on bunker 50 yards from the boat! Nat geo style!!! Been a long time since I fluke fished like this. Now that I own a Bucktail business I figured I better start!! Having some fun too got limit for boat today up to 8 lbs all on rattle head Bucktails! Sun Dried Tomato was hot!!! 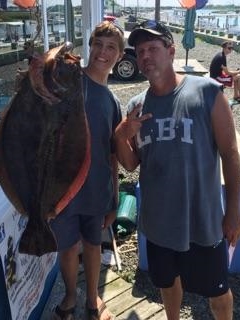 It's well into August and finally the BHMTC has it's "First Womans Tuna" (Chris) award caught by my first mate on the Bad Buoy. Not a shabby bull to ice the cake either. 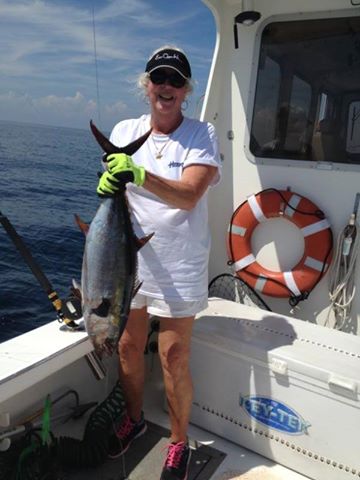 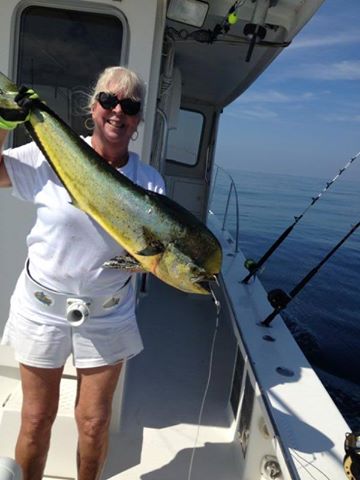 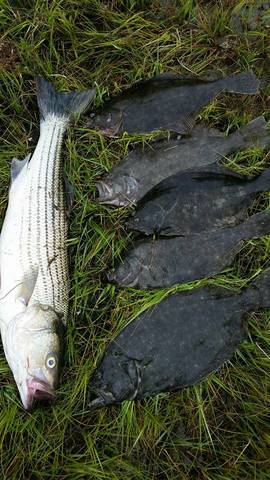 (You know her name) Ken Neill
Investigation
Scientists investigate post-release mortality of white marlin after extended periods of air exposure.
Many offshore anglers are unaware it is illegal in the United States to remove an Atlantic billfish from the water unless it is going to be retained. The management measure makes sense, after all, because billfish are adapted to respiring in the water and not out of it. But really, how much damage does a billfish sustain during the few minutes of air exposure required to take to a photo of an angler with their first billfish? A lot, according to recent research from the Virginia Institute of Marine Science.
Graduate student Lela Schlenker was investigating the physiological effects of angling time for white marlin caught on circle hooks. Fish in three categories of fight times (less than 10 minutes; 10 to 20 minutes; and more than 20 minutes) were removed from the water for about two minutes to obtain a five-milliliter blood sample from the aorta and to attach a 30-day pop-up satellite archival tag. She observed unexpectedly high levels of post-release mortality even after fights as short as five minutes, further determining that fight time was not a good predictor of mortality. Six of 21 fish died (28.6 percent), a level of post-release mortality more than 15 times higher than observed in a previous study I performed in which only one of 59 tagged fish did not survive. The only differences between the studies were that in my study, fish did not undergo blood sampling and were not removed from the water. This poses the question: Was the increased mortality in the recent study due to the air exposure or the blood sampling?
I received funding from NMFS to directly address the effects of air exposure on white marlin. The experiment aimed to place 21 30-day PSATs on white marlin caught on circle hooks and brought on deck for air-exposure times of one, three or five minutes. Last September, the crew of Healthy Grin, students Ben Marcek and Willy Goldsmith, and I deployed 18 of 21 tags off Virginia.
Their results demonstrated that air exposure greatly increases post-release mortality rates. Although sample sizes were not large, there was an increase in post-release mortality with time of air exposure: One of six fish with one- minute air exposures died; two of five fish exposed for three minutes died; and four of seven five-minute fish died. All but one of the seven mortalities occurred within 30 hours of release; only one of the seven mortalities was due to predation, which occurred to a five-minute fish 12 days after release. These two studies clearly show air exposures of even one or two minutes can prove deadly to white marlin and likely other billfish as well, so please keep them in the water where they belong!

What a day! Finally made it out with
Blaine Jr. Alan, Jr and I started off with top waters and hammered on the bass and big blues till 7:30. From there, we headed out for sea bass. We absolutely crushed them and were done before 10 with a 3 man limit with nothing under 21". We spent the rest of the day looking around for bonito. We never did find them, but all the signs are here, just need the fish!
Fish Shimano
Fish G.Loomis
Minn Kota
Humminbird

Saturday, August 20, 2016: I can only speak of mid-Island and north today, having begun volleyball in Ship Bottom in the a.m. and ending in Harvey Cedars and BL as the day went on. The ocean is feeling fine, once past the eelgrass, which is impossible to avoid in many areas, due to the NE and East winds blowing it in.

A goodly number of jellyfish in the water but almost all of them fully harmless smaller varieties. I did see a FB pic of a very bright lion’s main, I believe Surf city.

Also in the mix were the famed jellyfish “caps,” those clear flat and round pieces of former jellies. I say famed because they’re well known as a toss-about item, to the point of in-water fights with them – at least when I was a kid. It was during marine life studies years later I learned they’re technically called mesoglea. I thought that word was such a perfectly useless piece of information I never forgot it, which oft worked to my advantage. I’d suddenly yell “Mesoglea fight!” and before anyone has the slightest idea of what I had just said, I’d get to pummel them with gooey jellyfish caps. Hey, no one ever said that trivia plays fair. Besides, in places like MIT they scream "Comestibles Conflict!" for a food fight. Buncha dorks! Not that it matters but those jellyfish caps are the thick essence of a jellyfish, a bit like connective material. The good side is even if it’s the cap are from a severely stingy type of jelly – and they often are from long-dead lion’s manes – they hold nothing harmful, except maybe a fishy smell if you’re on the receiving end of one of my surprise mesoglea attacks highlighted by rear attacks with a solid splat to the small of the back. Based fully on Facebook reports, it sure seems some fluke areas are putting out big time. Not only is the size good but a few hotties are taking bag limits.

It remains hard getting a read on surfside fluke. Firstly, the beaches have been so dang crowded this year only very early and late-day allow enough room to feel around for any flatties in the swash. Now, that eelgrass is also playing spoiler, as it has for a number of days this summer.

To our north and south, but staying in Jersey, one-poundish bluefish are showing, mainly in the surf and, more often, in the inlets. It’s far from a steady bite but maybe it means we’ll see those little smoker-sized blues this fall – as I eye a Holgate reopening.

Improved fluking today with a limit catch and other legal sized ones released.
Kyren Dooley led the way with a 7 lb one while my biggest was 6 1/4 lbs. 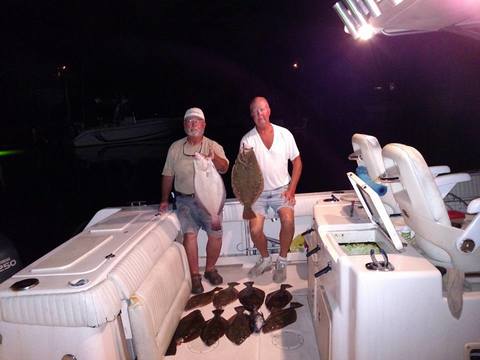 Starting the morning off right!
— at Holgate Inlet. 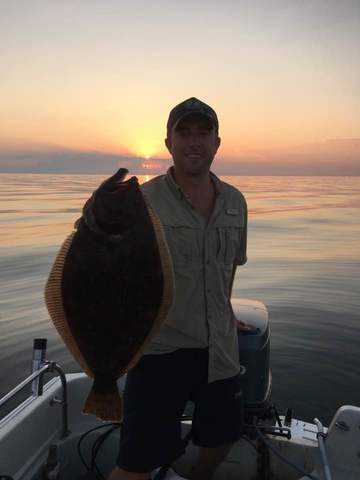 Fun trip out to the ledge loaded up on a bunch of real nice Mahi with light tackle and absolutely slaughtered the Tilefish in the deep. Hooked up with my first White Marlin while casting a plug which she threw about 10 yards from the boat then proceeded to circle us. Also caught a couple of Jacks while Mahi fishing. Unfortunately the trip had to be cut short due to engine issues. Huge thanks to my friends over at Spooltek for the awesome lures, they were deadly! 3 generations of O'Connells out on the boat with Capt Harvey today. Boxed 8 legal fluke to 26" and our 5 man limit of sea bass to 18". Ryan was definitely the seabass king of the day... And was rocking the rat pack shirt Jeff! Dylan had what's he calling a Halloween fluke because the white side was 3/4 brown. And I had the pool fish. 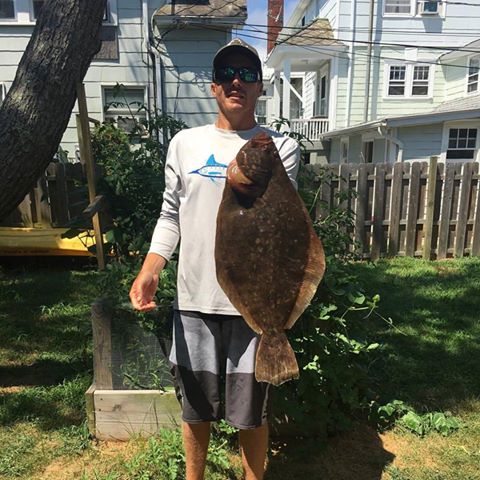