Sunday, August 14, 2016: Formidable heat early on. I had a 94 reading midday. Then I walked over the dune, with a 90-degree west wind at my back to run into an ocean-chilled onshore breeze. Within just ten feet the temp dropped over 10 degrees. I know I’m not the only one who experienced that bizarre insta-change. I’ve seen that happen a lot between the mainland side of the Causeway and the LBI side but within just ten feet atop a dune … weird.

The surf continues to undergo a slow cleanup process, though slower than I hoped for. By midday it was still turbid and a tad chilly, though warming faster than it’s cleaning up.

Still have that persistent short-period swell pushing in waves to three feet.

This weekend’s weather is not playing nice with bayside fishing. Yesterday’s 20-mph winds have given way to far lighter west winds and a beating-down sun of a full-blown max-10 sunburn index. Oddly, I haven’t gotten any obscenity-laced reports of biting bugs. Oh, those biters are out there … and on the fly.

Below you’ll see a photo of a hand-sized weakfish taken in a “blitz” up near Bayhead. Being the infernal optimist I’m adding that to a goodly number of other weakies hookups (and releases) to wonder if, hopefully, we might be seeing a comeback of this onetime fall mainstay; once so common it was added to the Long Beach Island Surf Fishing Contest.

The downside is how few young-of-year weakfish are now showing annually in the bay. I used to seine them up by the dozens per pull back when I had a small business supplying South Jersey pet shops with NJ-hardened s summer tropical fish, mainly butterfly fish. I went out of my way to get them safely out of the net and back into the water, ASAP. Those same years we had huge numbers of fall-time weakies. I don’t think we’ll ever get weakfish back while nursing ravenous-eating fluke and stripers. Hey, there are many who are just fine with that sacrifice – if changing it would tap into fluke or striper populations. Great morning with the my daughter and her cousin on the Toms River. 14 snappers great job kids 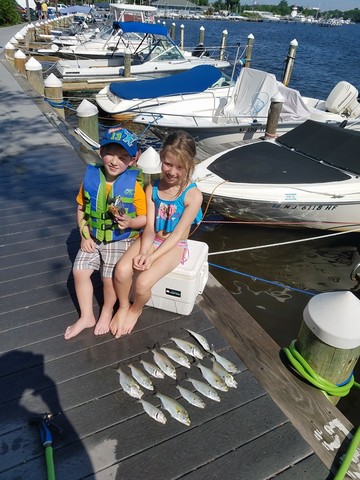 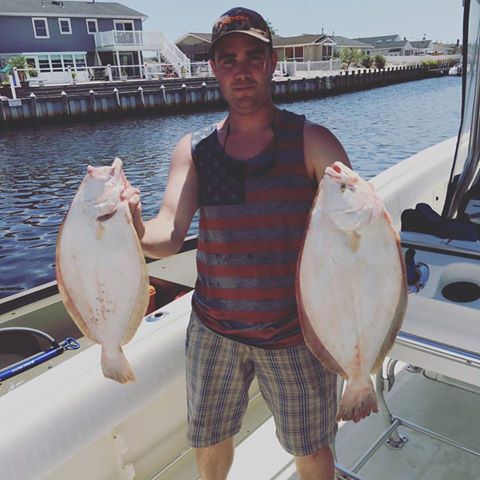 Greg Kopenhaver  Boys fished hard all day in the BHMTC tournament today. Landed over 30 fluke but nothing big enough for the weigh-in. It happens but they had a blast. Their sea legs got a workout today with the stiff south winds and then a long and bumpy ride home. They will sleep good tonight. Me too. 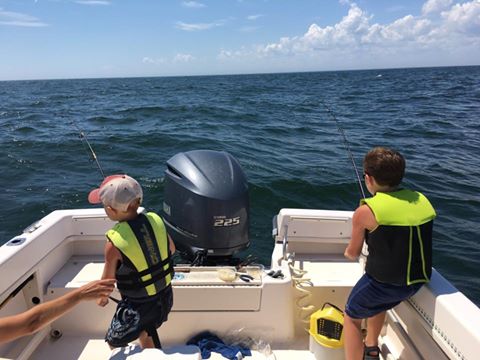 When in doubt, try it. There's no such thing as a bad idea. Trial and error has led to some of the best kept secrets.

Latest report available in the bio!

Below: You think you get pissed at personal water craft ...

Uncle Frank with his first shark! One of seven last night.

Saturday, August 13, 2016: Sweet day in the mornin’ – and the afternoon and evening. Ok, so maybe it sorta sucked for boat fishermen, with SE winds toying with 20 in gusts. But just rating it as an LBI beach and stuff day, it surpassed expectations – those expectations being “hot” even on the beach. Well, the AC was cranked kinda high even for high-summer LBI. It was close to amazing the drop in air temp from a parking spot to the water’s edge.

Part of today’s amped up AC factor was that upwelled ocean. As I noted yesterday, it’s not one of those frigid upwells but anyone thinking in terms of the 83-degree record-breaking water recently recorded down in Atlantic City was in for rude awakening. By the by, I see much toastier water by as early as late tomorrow. The winds could come a tad more offshore, i.e. SW. It will be better boat fishing conditions. Surf fishing is still at the mercy of the 2- to 3-foot wind swell and those seemingly daylong low tides.

The ocean remained mucked up for the early part of the day but did begin cleaning up from south to north. Cleaner water could also show by tomorrow. That could open the door to serious after-dark shark fishing, though one of the biggest gray suits I saw caught this past week was a high-sun brown shark, south end. At the same time, the Apex boys caught their largest brown/sandbar shark of a very shark-ful year well after sunset.

I'm volleyballed into oblivion. We played beach ball even with those winds. My face is baked like after the first offshore trip of the summer. Now I have to avoid running into my dermatologist ... who recently had to freeze off three "suspect spots" on my over-weathered face. yes, I used stuff lathered all over me. S*** just don't work with me.

Well wow is all I have to say
Hot as hell -slow fishing to start and finished with a bang
3 keepers up to my new PB 7lb-12oz
Annnd three peat pool winner!!!!

Below: When you have an undersized fish and Fish and Wildlife comes out of the bushes ... 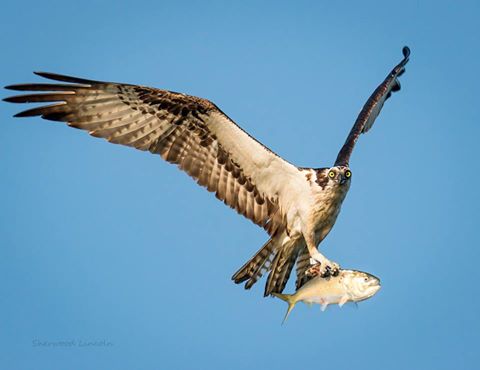 One or my favorite Photos: a Osprey with a kidnapped Bunker!

Congrats to my homies on the Hubirus for the win on biggest tuna and A lot of $$$! Way to get it done boys!! Damien Romeo Rich Kosztyu Brian Suschke

That's a Teahupoo wave. I don't even have to go look for it.