Morning fishing for 3 guys and a 10 year old. The tree guys catch a bunch of throw back fluke and 10 year old Liam catches dinner. Chartreuse gulp and squid for this 15 inch weak fish and 2-15 fluke. Love it when the kids catch the fish.
--Jingles Bait and Tackle

I just wanted to send you a pic of the nice bluefish my nephew - Kevin McBride - caught off the surf at Hobart St on 6/12/12. 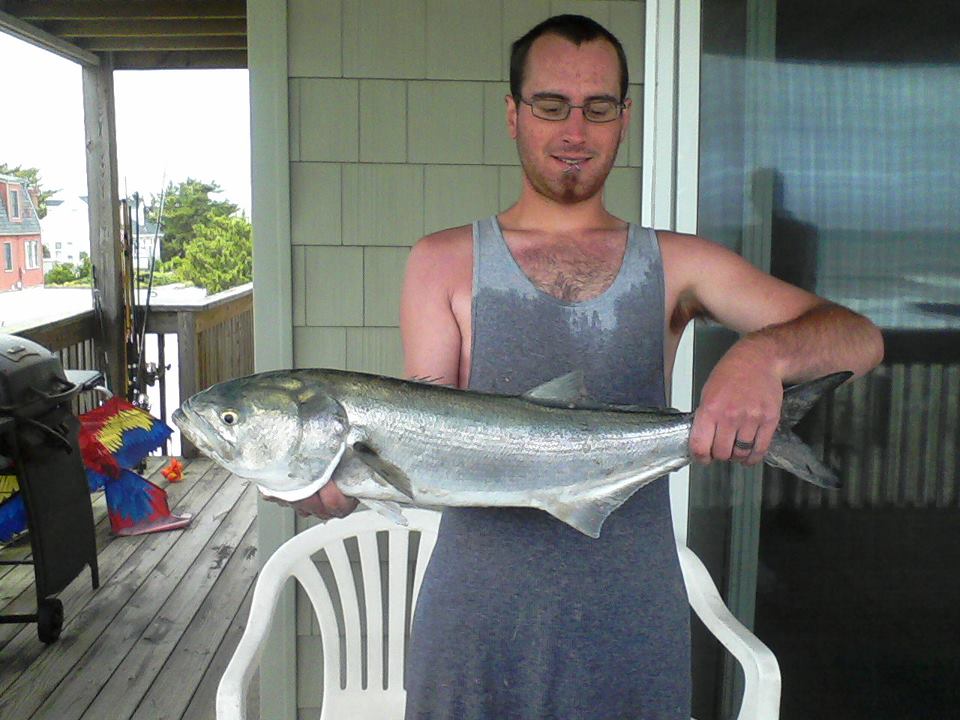 Saturday, June 23, 2012: Just in off the beach in Harvey Cedars where it was perfect beach volleyball weather – and seemingly ideal fishing weather. However, no anglers showing. A few smaller commercial boats were plying the near-in water – and plenty of birdplay following them as they cleaned their catch.

I saw two different ospreys heading west with bunker in their talons. Baitball must be out there, though, again, I don’t see a load of boats until I binoc way north.

Water is the spittin’ image of picture-perfect plugging water, which I’ll be doing his evening. I’m thinking about North Beach area. I’m also going to jig a bit for fluke.

As the bay fishing for flatties remains a losing percentage proposition – some folks reporting a 1 in 20 keeper ration – that often marks the arrival of decent summer flounder in the swash. I’m just gong to Fin-S it to see if any fluke salute, If so, I’ll hit the tackle shop and gear up with GULP! strips to place on smaller Avas (with tubes) -- or maybe go the SPRO route. Smaller is better when jigging the suds, even when after larger fluke.

FOX FRIENDLY FOLKS: Got a call from folks who have essentially adopted a male red fox. They know I’m opened-minded and open-hearted to such buddying up. However, I’m not even hinting where these fox-friendly folks are located. Technically, make that legally, keeping wild animals is a serious no-on -- though, this relationship remains plutonic since the animal is NOT housebound, i.e. kept inside as a personal pet. It sleeps on the back porch/veranda, albeit atop its favorite plush, meant-for-dogs bed. It seldom, if ever, wanders far from its surrogate home. Its favorite food? Grapes. Next favorite is “Boar’s Head” chicken cold cuts. Yep, the brand name seems to matter.

Interestingly, the fox will very reluctantly allow itself to be lightly touched by humans but it yelps because it’s also scared to death of such contact. It recently allowed itself to be groomed of its thick shedding hair. While it openly allowed a brush to touch its fur, it instantly knew if the human hand holding the brush touched it – and the whimpering began.

Animals, wild and domesticated, have an amazing read on their hair endings. I used to  mess with my late pit bull when he was sound asleep. And pit bulls show their sleeping like no other dog, often on their backs with legs erect and muscling upward as if fending off heaven. I would take a pencil and ever so lightly and meticulously touch one single individual hair on his body. He would sometimes flip clean over and bolt upright, as if a bear had just latched onto him. Other times, his body would issue this massive muscle spasm at the touch point. To their credit, the hair endings got used to my toying around very quickly and just ignored me.

Anyway, I’m invited out to meet “Mr. Deebs” (don’t ask, I didn’t) and to help figure out why the fox has recently been pacing the porch floor all night long, often whining loudly.  I know the answer -- and some track searching near the home will prove me out. It’s gonna be coyotes in the hood.

In fact, when I was told how the young fox was first found cowering in the corner of the veranda, I smelt coyotes. I’m betting this porch fox was the sole survivor of a coyote attack on a fox den.

As for the recent, multi-night pacing of the fox, that is almost always the sign of stalkers in the hood. Making matters worse, coyote pair can be astoundingly patient stalkers, willing to spend many a day and night in the vicinity of a potential meal.

When not whelping young, a coyote pair will essentially set up camp near a meal-to-be. While encamped, they’ll go out one at a time to find some sustenance -- while waiting for the ideal opportunity to go after the piece de résistance. Many suspicious cat or small dog disappearances are the result of coyotes putting in long drawn-out surveillances. I’ve found many a temporary coyote lair near homes where pets have gone missing. Yes, I then deliver the bad news to the owners. It’s better than having them remain unadvisedly  hopeful for days, weeks, even years to come.

By the by, I almost never find the fur or uneaten remains of in such predation cases. The coyotes get what they want and quickly carry their kill to safer, oft-distant real estate.

A perfect example of this prolonged and focused stalking behavior is likely reflected in a video taken by security cameras at a water treatment plant in Stafford. It showed a gal taking her small dog out for a night stroll on a dirt road. Seen only by the eye of the lens were coyotes paralleling every move made by the lady and her pet. I guarantee they were mainly keeping track of their potential meal, one in which they had likely already invested good coyote time. The coyotes would never go after the pet under those circumstances. Of course, had the gal routinely let Pippy the Pomeranian have a free run at some point during the walk, the coyotes would register that and during a future romp, Pippy would be … uh, there might be kids reading this so I won’t get into details.

Coyotes are damn clever and likely more deserving of the “sly” attribute historically bestowed upon foxes. Surely, they can be snarlingly aggressive predators when feeding or when a situation is totally on their terms. However, mark my first-hand words, coyotes are total pussies when suddenly set upon by an aggressive human – or a single pissed off pit bull.

This has already gotten long so I won’t go into the way the above-mentioned lady pit bull saved her little terrier buddy from an entire family unit of attacking coyotes, as many as four of them, per witnesses. The actual exchange between pit bull and coyotes went unseen but the pet eventually strutted proudly into the backyard covered in blood – yet with only a few nicks on herself. One can guess at what must have taken place in the woods.

I’ll update when after making my visit. And if you have any similar outdoor/backyard mysteries, please include me in your search for answers. I make house calls.