Sunday, July 18, 2010: I guess it’s redundant to bring it up but damn was it both crowded and hot out there today. Of course, it is the middle of summer and there’s no better place to try to get a br… 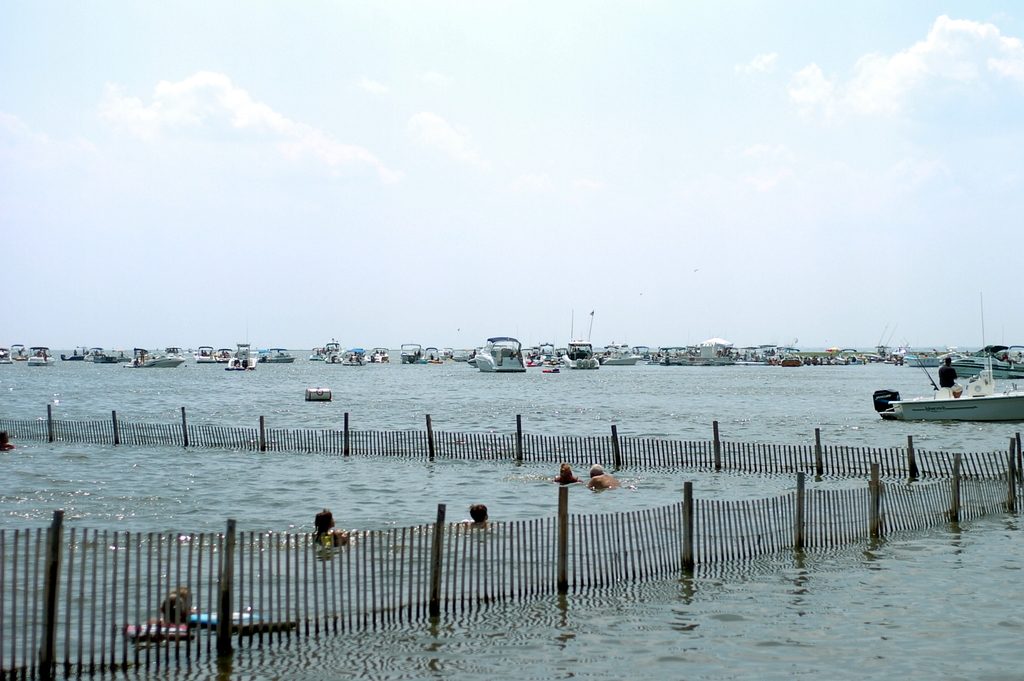 Sunday, July 18, 2010: I guess it’s redundant to bring it up but damn was it both crowded and hot out there today. Of course, it is the middle of summer and there’s no better place to try to get a break from the heat than beachside. Unfortunately, today was one of those rare west wind all-day summer days. It kept temps torrid, though the bugs – somewhat baffling – still haven’t shown up, despite the mainland being wing to wing with dastardly biters. The duneline dragonfly count was way down today, though there were still quite a few to speak of.

A shoulder of cooler water was flush against the beach. Water temps were as low as 64 degrees within. Just outside a ways, maybe a quarter mile, the water was into the 70s.

Flukers were not loving bayside drifting, heat-wise. Seems most of the boats in the bay headed down to Ship Bottom’s Party Shoal. I tried to count the number of boats anchored up out there and gave up at something like 150. That’s some serious partyin’. With heavy guzzling folks standing waist-deep in water, you have to think some water degradation was taking place.

The stingray count has seemingly fallen off, somewhat drastically. That could actually be due to turbid waters making it tougher to see them. Also, the rays do migrate northward in the summer. The big squadron of cownose rays we saw a couple weeks back might now be up off New England. They surely took the sharks with them.

Harvey Cedars beach note: DO NOT try to cross the Sahara-like beach sand there without foot covering. Hottest from 11 a.m. to 3 p.m.

Email: Jay, My kids can’t find any sandcrabs on the new Harvey Cedars beach … Are they gone for good?”

(You got me on that one. I’m guessing they might have gotten sanded over – by, like, ten feet of dredged sand -- and by the time they finally dug their way upward to the sruface, they were too high and dry to survive. That’s just a guess. The next time I’m on that beach, I’ll dig about a bit. I had a similar report last year (non-replenished beach) and when I went down to check the place was crawling with mole crabs (sandcrabs to us). They do go AWOL now and again. J-mann)

As good as our bay fluke fishing has been for the past month, I never would have guessed it would get better. But it did and the fish not only seem to be ignoring the unseasonably hot weather, they seem to be loving it.

Wednesday I had Rich Smith out from Yardley, PA with his sons Sam and Lyle for a relaxing day on the water that turned into absolute fluke mayhem by the end of the morning. The first part of the trip saw the same kind of steady pick of fish that we've seen for the past few weeks with 25-30 fish coming to net in the first few hours. Not bad, right? Then the fish turned on and started hitting our baits the minute they reached bottom. Fish were coming over the side two or three at a time, bucktail/teaser rigs were producing double headers, action was non-stop. By the time we headed back to the dock, we conservatively guessed that 150-160 fish had been landed and at least that many hooked and dropped. Unbelievable fishing, and the big bags of filets will make for some excellent dining to come.

Yesterday I had Vince Barba back with his friend Deena for a quick outing, and while it wasn't quite as frantic we certainly had a better than average four hours with 60-70 fish, including four fat keepers, coming over the side before we headed in early to avoid the heat. A huge stargazer that decided to sample Deena's bait added to the fun.

As noted last week, I've switched over to using true ultralight tackle for this fishing and it's a blast catching these fish on small jigs and our custom teasers. It's hard to say how long this will last, but hopefully we'll get a few more weeks out of it. I've still got a couple of open dates before the end of the month, so now's the time if you want to get in on this.