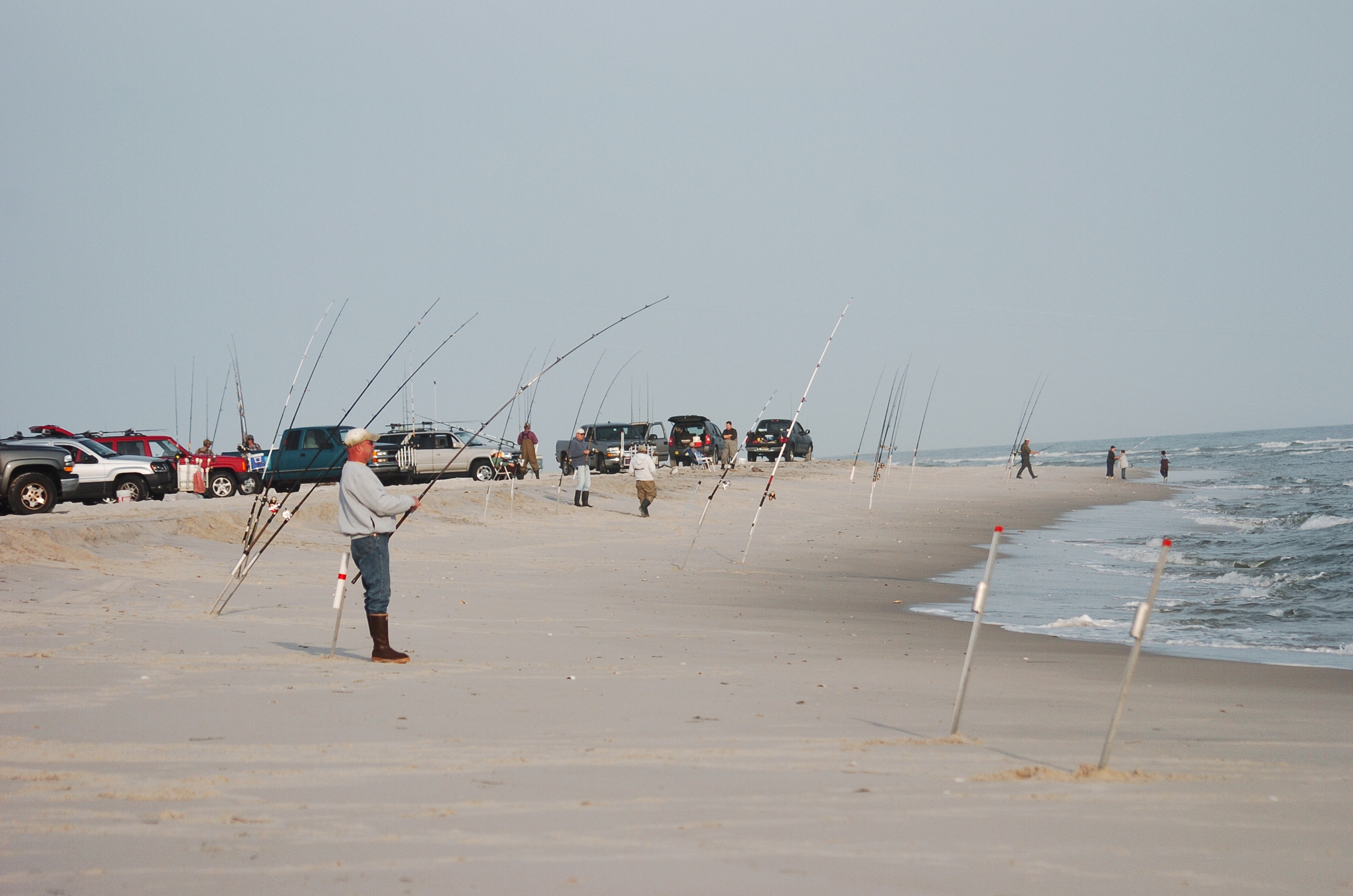 Monday, November 03, 2008: waves: 2 feet out of the north. Currents: Light north to south; sinker weights 2- 4-ounces. Water clarity: excellent. Bluefishing remains strong with single hookups between long pauses being the pace. The blues are fat and strong but not really up to the size expected for fall. Still, it makes great fun for tourney-ites. Bassing is slow except when fast. Obviously, fast times are hard to catch up to. You have to be right there, right when detonations take place. Holgate has seen the thick bunker school getting hit by better bass late-day. Snag-and-drop surfcasting style has worked for a few folks. I hate to say it but bunker heads are also taking decent bass. Exceptionally heavy buggy traffic has hit the Holgate tip. If you have alternative sites, it might be prudent to pause at them first. I’m getting together my weekly blog so if you have any cool fishing tales, throw them my way. Thanks. I had small bass on the backside of Holgate, No bass of significance. It was dead clam so very understated Heddon Spooks drew attention without creating too much splash. All the hits were right as the snaking Spook approached shallows. One blue also tried to jump on. Thanks to those who have donated to this website. It’s a slow go this go’round (economy and such, I’m thinking) but every dollar helps keep it up and running. Joe H. report: Jay, Fished Sat. all over the beachfront and didn't do too well. Saw some bunker, but they never moved in. Sunday was a totally different story. The NE wind did the trick. Had bluefish in the BB early morning surf. But it was a late day South End session that was mind blowing. Hope you were there. It was like Friday, except I was there! Adult bunker everywhere. Every one hooking up big bass and monster bluefish. This went on for hours. Saw multiple bass in the 20-30lb range get caught. Seals were spotted chewing on bunker. I caught 3 bass and 3 bluefish. All were released. I weighed a 10/0 bluefish for the derby and released him. All methods were working. Plugs, snag and drop bunker, bait fishing. I had a big bass grab my grass covered sinker as I was cranking it across the surface at warp speed to clear the grass so I could make another cast. This happened at least 3 times. Crazy! After releasing the bluefish, I hit the BB surf till 10pm. Good conditions and I found more stripers. They were all just short of 28" though. All on bunker … Joe H ^^^^^^^^^^^^^^ Web post: “Hi Jay Seven bas today in Holgate 3, keepers, mostly coming on bunker. Caught on the incoming and top of the tide.” ^^^^^^^^^^^^^^^^ Here’s the BH charter boat report: The main attention of the boats of the Beach Haven Charter Fishing Association has shifted to striped bass. Captain Fran Verdi of “The Dropoff” has been finding his share. He had an open boat trip with Mitch from NJfishing.com who was joined by Pete from the bassbarn.com and his friend. They got a late start due to the extremely low blow-out tide. They cleared the inlet and worked their way up the beach trolling umbrella rigs finding one slammer bluefish. After getting a report the inlet had fish, they turned around and went back. They found a slow bite and went back trolling with little success. They moved to the reef for some sea bass and tog. They left the reef and tried anchoring up in the inlet with clams tossed into a rip. Within minutes the first striper was boated. In all they landed 8 Stripers and kept two. The inlet seemed loaded with bass with many of then being short. Captain Dave Wittenborn of the “Compass Rose” has been fishing in the Sandy Hook area and says the fall bass run there lived up to its reputation over the past He trolled north out of Sea Bright to the Shrewsbury Rocks and found only blues in the five pound range. They decided to run over to the NY side of the Ambrose Channel and set up in 30-feet of water. Using clam bellies, their first bass measured 30-inches and weighed in at 10-pounds. After landing a few fish, skates and sharks moved in and the tide slowed. As they headed in they spotted bird action between the channels and decided to go have a look. It was an all out bass blitz with constant action in the 24-28-inch range for the next couple of hours. After tiring of reeling in fish they headed in for good. Meanwhile, the “Miss Beach Haven” and Captain Frank Camarda did some bottom fishing last weekend and found good fishing. They started off inshore with pretty much drop and reel fishing on mostly black fish and a couple of porgies and some short sea bass. They moved into 75-feet of water and found some jumbo porgies and a lot of sea bass with a keeper ratio of 10 to 1. Billy and his nephew from the south east fishing club stayed with clams on this drop they filled a 5 gallon bucket with keepers not easily done. The spiny dogfish were relentless on the clams and sea bass bad.. Pool winner today was Jerry L from Medford with a 4lb tog. The “Miss Beach Haven will be doing a 14-hour offshore wreck trip on Veterans Day, November 11. The boat sails at 3 am. and reservations are required. The trip is limited to 22 passengers. Additional information on the association can be found at www.BHCFA.com

Comment by jaymann on November 4, 2008 at 10:29am
I drive a grey 2002 GMC Silverado with racks in the truck's bed -- and, lately, an orange high flier (net float with black flag on PVC staff) out of one of the rack's holders.