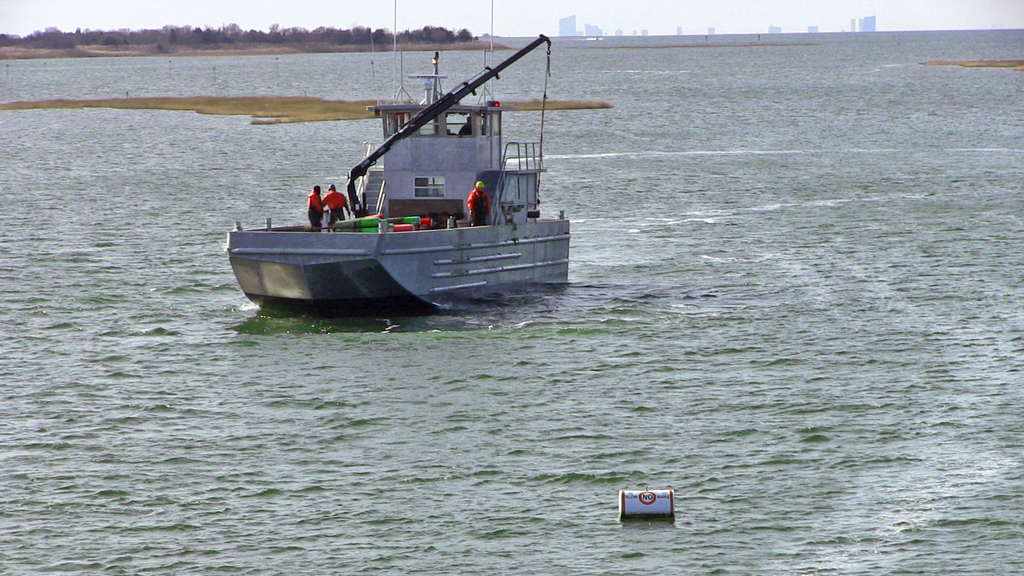 Nov. 20, 2013 a.m. report: The wind has gotten all pissy, messing with the amazing boat bass bite. The winds will be laying down later today and great tomorrow and Friday. Then comes Saturday and wind ugliness. There could be gale gusts for the weekend. Sorry guys.  If you can break away for tomorrow and Friday, do so. 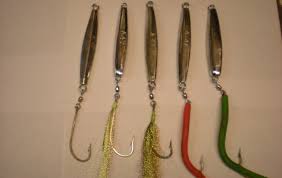 Beach is running hot and cold for plugging, jigging, plastic worming and Ava-ing -- that last one is high on the castables list, providing the Avas are accompanied by hot teasers, or even small sand ell-like plastics acting as teasers. Considering what it has been like, even an occasional 28-incher makes for some hooting.

I'm also hoping they also make for a late-day bite since that's the time frame I'm forced to target with work and all. By the by, for those folks only hitting the beach or water on occasion, a warning that it now gets dark way too early, filling the Berra-ism "It gets late early around here." A buddy caught a sweet redfish, cooked it up last night (famed blackening) and served it at a small dinner party -- with steaks and other assorted meats.  The table went hog-wild over the drumfish meat, so much so the angler's wife was miffed there was so little fish -- and her steaks were so out-shined.

TRENTON, N.J., May 4 /PRNewswire/ -- An unprecedented alliance of commercial, recreational and party/charter boat fishermen and associated businesses has formed Fishermen Organized for Rational Dogfish Management (FORDM) to deal with a looming crisis. FORDM has requested assistance from Dr. Jane Lubchenco, newly appointed National Oceanic and Atmospheric Administration head, in dealing with an out-of-balance population of highly predatory spiny dogfish that is depleting other Northeast and Mid-Atlantic fisheries. Scientists estimate their biomass at up to four billion pounds.

The classic Fishes of the Gulf of Maine says of this shark species, "voracious almost beyond belief, the dogfish entirely deserves its bad reputation. Not only does it harry and drive off mackerel, herring, and even fish as large as cod and haddock, but it destroys vast numbers of them... they prey on practically all species of Gulf of Maine fish smaller than themselves." Spiny dogfish can exceed 5 feet in length.

The huge population of these ravenous sharks is holding back the recovery of New England groundfish and many others fish stocks, either feeding heavily on the more valuable species or on their prey. In 1992, Dr. Steven Murawski, now National Marine Fisheries Service's chief scientist, wrote, "Given the current high abundance of skates and dogfish, it may not be possible to increase gadoid (cod and haddock) and flounder abundance without 'extracting' some of the current standing stock." The abundance of dogfish today greatly exceeds that of skates, comprising over half of the fish taken in the Northeast Fisheries Science Center's annual trawl surveys.

Conservatively, spiny dogfish require a daily food intake of 1-1/2% of their total body weight. This equates to a minimum of two and a half million metric tons of prey species eaten every year. In 2007 the commercial catch of all species from East coast fisheries was 2/3 of a million metric tons.

Throughout their range spiny dogfish are also seriously interfering with traditional fisheries. According to Ray Bogan, legal counsel for United Boatmen and member of one of New Jersey's oldest party/charter fishing families, there are more spiny dogfish than he has encountered ever before in a lifetime spent on Mid-Atlantic waters, it's impossible to fish in areas that they have seasonally "taken over," and every year they take over more fishing grounds. Hank Lackner, Captain of the F/V Jason & Danielle out of Montauk and participant in a number of government sponsored trawl surveys, reports that spiny dogfish are destroying 10 years of efforts to rebuild other stocks and are overpopulated from the beach to 250 fathoms, from Cape Hatterasto the Canadian line.

Dick Grachek, owner of the F/V Anne Kathryn out of Point Judith, relayed a message from Captain Joe Mattera, who had just curtailed a scup trip because of the extraordinary number of dogfish he encountered. His net was plugged with spiny dogfish in five of the seven tows he made. Jim Thompson, a recreational fisherman from Delaware, reported that when wreck fishing he catches 20 spiny dogfish for every targeted fish. According to Cape Codgillnetter Jan Margenson, "The codfish gear we haul is plugged with dogs and the occasional cod we catch is stripped to the bone of flesh. They act just like piranha, only it's our catch that they're eating." Chris Long, a San Francisco resident who comes to fish on Cape Cod for striped bass and tuna for five days every three weeks in the spring and summer, is now "doing (fresh water) bass fishing in the Cape Ponds" instead.

Craig Banks operates a commercial fishing website. He has spoken with hundreds of recreational and commercial fishermen from New England down to North Carolina about the dogfish issue and says, "The general consensus is that dogfish numbers have been building and now they often make fishing impossible. One of the biggest concerns is the voracious appetite of the hordes of dogs that travel the coast, eating everything in their path." And Rich Ruais, Executive Director of organizations whose members target tuna, reports, "There is not a doubt in any tuna fisherman's mind that the abundance of dogfish throughout the Northeast has severely impacted tuna catches over the last decade. If action is not taken soon to control the hoard of dogfish, the ecosystem in general and the migratory habits of bluefin tuna in particular may be permanently altered and, in spite of our rigorous conservation efforts, the traditional giant tuna fisheries may be destroyed forever."

According to Jim Donofrio, Executive Director of the Recreational Fishing Alliance and an organizer of FORDM, "Tens of millions of recreational fishermen, tens of thousands of commercial fishermen and the thousands of businesses that depend on them are suffering a double whammy because of a management philosophy distorted by foundation-funded marine 'conservationists' with no regard for fish or fishermen, just the crises they create. As the huge biomass of dogfish is reducing the populations of other, far more valuable species, fishermen are required by law to compensate by catching less of those species. This is becoming increasingly more difficult - and more expensive - because of interference from the ravenous hoards of spiny dogfish."

The Magnuson Act, which establishes federal fisheries policies, has been amended by pressure from rich environmental activist groups, making it virtually impossible for managers to effectively address issues like this. Coastal legislators includingNew Jersey Congressmen Pallone, Lobiondo and Adler, Massachusetts Congressman Frank and North Carolina Congressman Jones, who are familiar with the untenable position that the federal law puts fisherman in, have introduced legislation, H. R. 1584, CommentsClose CommentsPermalink addressing some of its shortcomings.

Nils Stolpe, another FORDM organizer and Communications Director of Garden State Seafood Association, emphasizes that Dr. Lubchenco now has an opportunity to prove to the fishing community that concerns over her association with the Pew Charitable Trusts are unfounded. "Pew is inextricably linked to the advocacy science that seems designed to turn the public and our elected officials against fishermen of every stripe. This will be her first opportunity to demonstrate that she will guide NOAA with a balanced hand, utilizing objective science and fairly serving all of her constituents, fishermen included."

The FORDM letter to Dr. Lubchenco is available at http://www.fishnet-usa.com/dogforum1.htm, along with additional fishermen's comments and other material on dogfish.

The striped bass have finally arrived in Beach Haven, and the boats of the Beach Haven Charter Fishing Association are in the midst of the action.

After many weeks of hearing of hot fishing to the north, the striper bite arrived off Long Beach Island with a vengeance over the past couple of weeks. These fish are a short ride from the inlet and are being caught by trolling, jigging, and even live lining spot.

Captain Jimmy Zavasky and mate Pat took the “Star Fish” out and found the stripers abundant. The bass were up on top and chasing bait as Chris Bertuccini of Woolwich Township and his friends hit pay dirt. According to Captain Carl Sheppard “If you jigged on the bottom you caught nothing but doggies, while up on top the fish ate anything that looked like an eel.” The party on the “Star Fish” boated 13 bass with 10 keepers in the box.

Captain George Finck of “Sparetime Charters” had a couple of successful striper trips. Linda Swartz and her 10 year old son Michael and her work partner had good luck in the rain. Michael showed himself up to the task as he caught his first striper. The party returned with two nice bass. The next trip was with Ross Alber and friends. Despite a heavy fog, fish were caught. One 16 year old caught his first striper to go with another fish of about 20-pounds. Two more stripers spit the hook at the boat which were also about 20-pounders.

Captain Fran Verdi on the “Francesca Marie” has had several trips where he managed to find limit catches for his anglers along with enough throwbacks to tire them out. Most of his good catches were with live spot in close to the beach. His anglers brought bonus tags so they could take an extra fish home for the freezer.

Since there is so much bait in the water off Long Beach Island, there is no reason why this hot bite will not last for a few weeks.

Additional information on the association can be found at www.fishbeachhaven.com.

Nice way to start this frigid day- washing off this still flopping striper & seeing the scale move. Brendan got this Derby 16.12 bass on a plug in LL.

One of five this morning and I made a bunch of new friends. The park was shoulder to shoulder for miles. Can't wait for the weekend!

Nick English weighed in a 16-lb 4oz bass this morning. He caught it off of the Harvey Cedars surf on a AVA jig. We also got word of other bass on the north end surf.