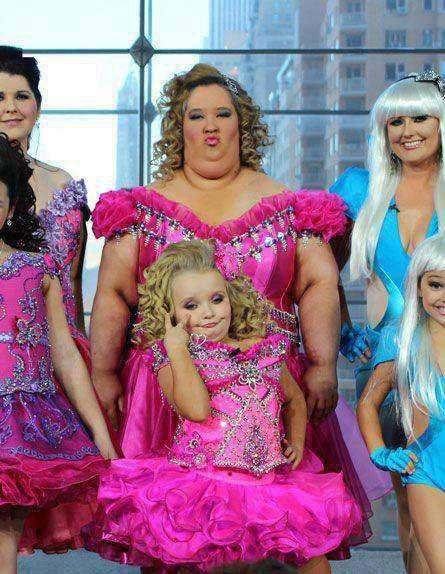 (Above) I actually got some folks reading my Weekly Blog and asking "Who the hell is Honey Boo Boo Girl." I can't resist showing. That's her mom behind her. Pink-necks.

Wednesday, September 19, 2012: It’s the morning after and even though there is no getting onto Holgate with a buggy until the tide drops, the day’s a polar opposite of yesterday – though I guess I really shouldn’t even toy with the word “polar” with winter not that very far off.

Despite the now seemingly obligatory hype and hullabaloo before last night’s “storm,” it really didn’t amount to a hill of wind beans. Sure, some signs went down in some towns and a tree branch or two broke onto someone’s Lexus but I think you have to agree that things have even got crazier in the pre-storm hoopla, especially on Facebook, where there are now hundreds of armchair forecasters watching the skies as if gold coins were about to pour down from above. In the past, it had mainly been Weather Channelists and neatly dressed TV weather reporters going sensational over sky things. Now, a passing shower gets tracked like a convict. Hey, it’s kinda fun.

Anyway, I’ll be hitting the beach to see what’s what in the face of wind and waves. I know many beaches got eaten away one good but a one-day blow bounces off the backs of beaches.

There are still some sizeable swells, which actually seem to be residuals from the ground swells we had prior to the storm. I say that because the 3- to 4-foot waves today are medium-period and out of the northeast. The winds yesterday were strictly south and obviously very short-period. Those short-period waves are pretty much gone in the face of offshore winds.

GETTING RIPS RIGHT: I work closely with the Weather Service in making the daily “Rip Current Forecast” for the Jersey coastline.

If you happen to see or hear of incidents involving swimmers in distress, please let me or the Weather Service know.

We quickly factor in real-time incidents and align them with the current rip current levels to determine if there is a need to upgrade to a higher level of alert. In fact, just last week, we got so many rescue reports on a particular day we raised the rip current level from “moderate” to “high” -- and broadcast enhanced advisories to the public.

Each reported rescue incident is data-logged into the computers, offering a correlation between the alert level and the incidence of rescues. Such data will instantly enhance the computers’ abilities to more accurately forecast future alert needs.

In just the past five years, the Weather Service in Mount Holly has gone from a rip current forecast based merely on wind speeds to one based heavily on complex swell periods and directions, surface wind factors, and astronomical influences, especially tidal swings. We’re getting to the stuff rip currents are truly made of. Now, if there was only some way to factor in human error in the face of an ocean in no mood to entertain clueless bathers.