Above: Today in Holgate, herring were running large --- and, below, plentiful, as in double and triple-headers. 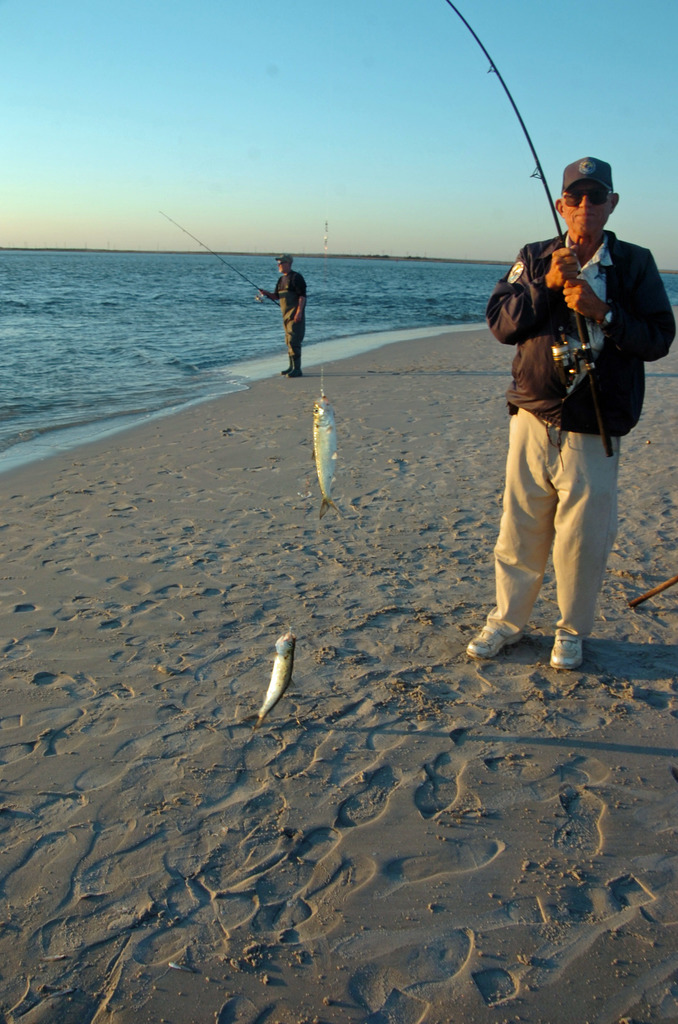 Monday, October 22, 2012: Although it was a working day for me, I snuck out a tad early to catch at least a piece of a truly gorgeous fall day. While there was a touch of chill in the air, it’s still mild above and beyond the calendar. There’s plenty more of that warmish weirdness throughout much of this week.

Right after I drove onto the beach, mid-Island – with Holgate my ultimate destination -- I spied a brown patch hanging in the shallows, right near the beach. I figured it was a school of bunkies, i.e. peanut bunker.

I needed a bit of bait so I grabbed by cast net and threw in a way to just nick the baitball. Fully opening a 8-foot net atop a tightly packed bunker ball can literally overload the net, making it damn near impossible to drag in, much less lift to empty.

To my surprise – and eventual dismay – it was mullet. While that would generally be a very good thing – in a bait shop way – these were the dreaded mini-mullet, no more than a couple inches long. My entire net was fouled with gilled baitfish. What a pisser.

I shook out as many as possible but still spent the next 15 minute loosing each stinkin’ fouled mullet, one at a time – as what little time I had drained away.

Aggravatingly, I left my cameras at home so I couldn’t get a shot of a fully fish-fouled net. Quite a weird sight.

Bait would be the tale of the afternoon, as opposed to far less important things like big bass and blues.

There is a currently an astounding showing of rainfish along much of the LBI beachfront. They’re everywhere – and packed in. 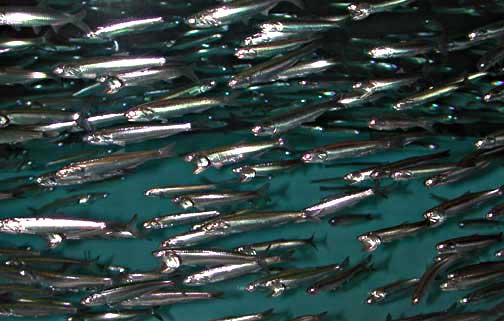 Rainfish are a favorite of bass, including larger ones. However, today the spearing-like baitfish were attracting a fish species that live and breathe rainfish: ocean herring. In Holgate, a load of folks were having a fun time light-tackling these scaly bundles of pure energy. It’s as close as we can get to tarpon. The herring were running very large; too much for live-lining. Also, harassing the slime off the rainfish were snapper blues, under one pound. I have to admit, I kept maybe ten of the little blues. They were bound for jerky strips. A fellow who hickory smokes bluefish, told me that tiny snappers have a milder taste and dry very quickly. As we speak, the deboned blues I invited home are swimming in marinade. They’ll be in hot air tomorrow.

I guess I should note some striper action took place today, including one Classic weigh-in. That tourney fish was a13.88 bass, taken in Loveladies by John Campbell. He caught it on bunker, toward dark.

A non-Classic bass was taken at the Holgate Rip this morning. It was pushing 15 pounds and went for a smaller swimming plug.

Tailor blues -- to three pounds -- are still around and going for bait.

I have no idea what the following news story is all about. What impact will spearfishermen have when compared to angler and commercial fishermen?

A bill that has passed the state's House of representatives and would allow recreational spearfishing for striped bass is getting diverse reactions — with support and opposition from what might be seen as surprising sources.

State Sen. Bruce Tarr and Rep. Ann-Margaret Ferrante are among the co-sponsors of legislation, which has passed the House and is now before the Senate. The bill, with Rep. Sarah Peake, D-Provincetown, as primary sponsor, would create a new form of hunting the signature inshore game fish for New England and the mid-Atlantic states.

Dave Stillman, who owns the Cape Ann Divers dive store at Eastern Avenue Plaza in Gloucester, is dubious about the idea of spearfishing for stripers, and says he does not believe it will help his business.

”I don't take fish out of the water; I'd prefer to watch them, rather than kill them,” he said in a telephone interview Friday, adding that he does not sell spear guns.

”No nets, no spears, do it with hook and line, end of story,” said Adler.

But two celebrated Gloucester fishermen, Al Williams, one of the cape's premier recreational and commercial striper fishermen, and Mark Godfried, an industry consultant and retired fisherman, gave qualified support to the idea.

“Spearfishing is done in other states (New Hampshire and Rhode Island),” said Williams. “The technique is somewhat defensible. It's not as blind as the normal hook and line method of fishing for stripers. the problem is the intermingling with other fishermen,” not to mention lobstermen.

The law in Massachusetts gives divers a 100-foot clearance from boats, based on the location of the divers' flag; this protection has been contentious when divers were in the vicinity of lobster traps, and kept working boats from working.

Godfried said he agreed that spearfishing was, by nature, more discriminating for conservation. The spear fisherman can be “far more selective” than the hook and line fishermen, he said.

But Godfried said the safety circumference has caused problems with lobstermen. He said he'd prefer to experiment in a limited number of areas with with spearfishing for stripers

Tarr could not be reached for comment, but Ferrante offered support for the measuring, noting that “the fishery is highly selective.”

”There's no reason not to do it, it requires a lot of skill,” Ferrante said, and it would eliminate a disincentive for visitors who gravitate to the New England ocean states that allow spearfishing for stripers.

Striped bass are, in this month, ending their northern migration for the warm weather months and returning to the offshore waters of Virginia and North Carolina and wintering in the great riverine estuaries of the Mid-Atlantic region. Stripers are also an important commercial rod-and-reel fish in Massachusetts as well as New York, Delaware, Maryland, Virginia and North Carolina.

Stillman of Cape Ann Divers said that, at present there is not much spearfishing in the waters of Cape Ann.

A similar bill died was approved by the House last year, but died in the Senate.