While outlawed in many states, Jersey might allow cat fishing in infested feral cat areas ...

Tired of losing so many fishes right next to the boat, Lucas decided to ...

Monday, October 01, 2018: Back to the grind … after that weird grind at the around-back in Holgate. I’m hoping things have been rectified to the point where all parties maintain their righteousness but agree to now let it slide. This is when my ADD allows me to listen to the number-dangling angels begging me to move on. Someday I’ll explain that.

Speaking of the south end, I want to pass on further confirmation that northern sections of the Holgate refuge are as narrow they have ever been, as in way-ever. Just this past weekend, with no storm systems or overly radical tides, high tide ocean water snaked across the beach and over to the now nearby bay. Here's what I consider a spooky look at the insidious destabilizing of Holgate.

Bluefish continue to overly abound. I’m hearing a fish per cast during some flurries. In Holgate, I’ve been grabbing slightly larger ones – large enough to get decent fillets from – for jerky.

I’m not sure why but the blues I'm catching are running super thin, despite one of the largest mullet runs in years, maybe even decades, for them o feast upon. The fact my surface plug is getting voraciously pounced upon proves that mullet must be far more elusive than their packed-in numbers might suggest. When it's forage like rainfish, the blues get so engorged those little baitfish are coming out gullet. As I've cleaned the blues, I've yet to find a single mullet in any of their bellies.

Here’s a recent batch of jerky I made – actually closer to a jerky/smoked hybrid. Boy do the fillet strips shrink in the drying process. In the bay the snappers are still biting and there are a few cocktail blues there too.

The 64th Annual LBI Classic starts next Saturday so make sure you sign up this week.  Free shirts with sign up will be coming to an end soon so don’t wait!!

Looks like it going to be a warm sunny week – Enjoy!

BASS BANTER: I nabbed a one-hand striper, i.e. you can wrap a hand around it to unhook. However, he was fat as all get-out, proving stripers have a more diversified and available diet than nearby skinny high-amp blues.

While we’re thoroughly stuck in a warm-water tiny-striper pattern, any bass over legal size could be a big winner if entered into the LBI Surf Fishing Classic, which kicks off this coming weekend and runs clear through Dec. 9. That's a lotta contest for a measly entry fee. Remain a "derby" traditionalist and sign up again. If it’s the first time you’re joining, be an instant traditionalist. Just don’t first catch a fish then sign up to weigh it in. That verboten.

By the by, the Classic Long Beach Township beach buggy permits begin Oct. 6. It’s the same price even though the event is now nine weeks long. A quick thanks to the folks at the LBT police department headquarters for being so ready and willing to sign folks up for buggy permits; highly professional. As repayment, let’s make sure to strictly abide by the rules of the beach – beginning with first getting one of those permits before driving a-beach. I will advise, for the record, that the unposted/legal speed remains at 15 mph. I recall there was an effort to increase it to 20 mph but I’m not sure how that played out. Simply put: Keep it slow.

Importantly, these warm air and ocean temps will have many a beachgoer pushing the season. Beachgoers always have the right of way, even when acting goofily.

When running dogs come into play on the beach, give wide berth/lee; I’m talking getting as far away from those beloved pets as possible. Folks walking dogs can be insanely sensitive, so to speak.

If a dog bolts toward your buggy, as can often happen, DO NOT accelerate. Come to a complete stop. Pet owners are almost always on a vehicle-chasing Fido in a flash.

Being a dog person, I’ll sometimes get out and meet the pup – and hold it in-place if a panicked owner can’t get the dog to "come!" I keep dog biscuits at the ready.  Never had a cat run after my buggy, thus no need to keep catnip close at hand. Below: More likely.

I'm not sure what to do in this instance: 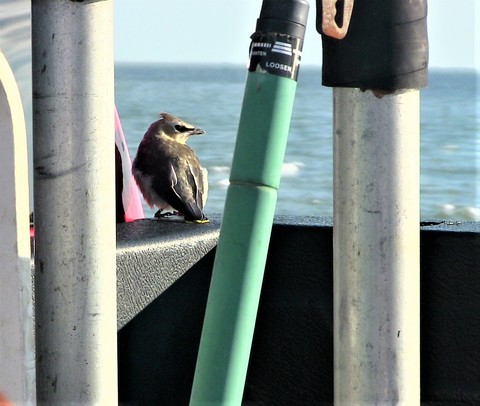 Found a tiny winged one waiting for me at me truck ... Here's a video look: 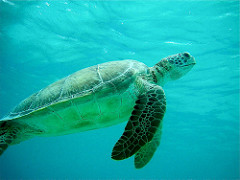 Ending years of controversy and debate, Gov. Jerry Brown late Thursday signed a new law phasing out the use of giant ocean fishing nets used to catch swordfish, but blamed for accidentally killing sea turtles, dolphins and other sea creatures.

The bill, SB 1017 by state Sen. Ben Allen, D-Redondo Beach, requires the state to set up a program to buy back nets and fishing permits from commercial fishermen who work in the state's drift gill net fishery.

The nets — giant nylon curtains that can stretch one mile long and extend 100 feet underwater — are used mostly by fishermen between San Diego and Big Sur. Although they are intended to catch swordfish, thresher shark and opah, studies have shown that they entangle dozens of other marine species, including whales, dolphins, sea lions and sea turtles, fish and sharks. Those animals, known as bycatch, are often thrown back overboard, injured or dead.

"There is no longer room in our oceans for any fishery that throws away more than it keeps," said Susan Murray, deputy vice president for Oceana, an environmental group with offices in Monterey that pushed for the new law.

Because of their impact on marine life, drift gill nets have been banned in other countries and states.

California is the last West Coast state to allow drift gill nets. Voters banned their use in state waters out to three miles offshore in 1990, but they remain legal beyond that in federal waters. Many other states already have banned them, including Washington, Oregon, Alaska and Hawaii.

Critics say there are other ways to catch swordfish, including using baited hooks attached to buoys. Last June, the Trump administration killed an Obama administration rule that would shut down the drift gill net fishery for two years if two sea turtles or large whales were killed or injured by the nets.

There are 20 commercial drift net boats left in California — down from 129 boats in 1994. Supporters of the industry note that federal and state rules, along with industry practices, have reduced the amount of bycatch by using nets with larger mesh openings 14 inches wide, placing electronic devices that send out pinging sounds to scare away dolphins, and other measures.

"All fisheries have some bycatch if you catch anything in numbers," said Gary Burke, a Santa Barbara drift gill net fisherman, in a May interview with this news organization.

Banning the nets in California won't stop demand for swordfish, he said. The fish now will come from other countries with fewer rules.

Under the new law, it will become illegal for California fishermen to transfer their drift gill net permits starting March 31, 2019. After that, the state Department of Fish and Wildlife is required to set up a program by March 31, 2020 to pay fishermen $10,000 for their permit. Active fishermen will be paid an $100,000 for surrendering their nets to the state for recycling and disposal.

Within four years of it being up and running, any remaining drift gill net permits will be revoked.