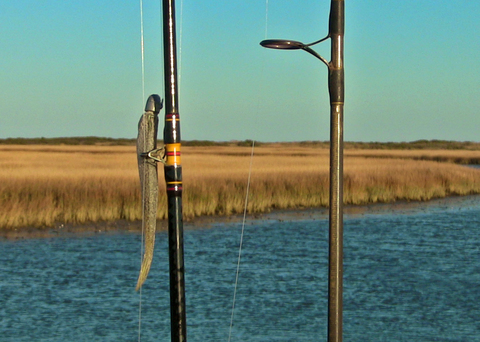 “Dropped my boat on the water around noon today. Guys pulling their boats told me of an insane early bite up off the coast station on IBSP. I headed up there and found acres of bunker and boats but there were no longer fish on them.

Some guys working the pod next to me said it was crazy early on both today and yesterday. All of their fish today were over 40”. As I was pulling my boat out another guy coming out said pretty much the same about the early action.

Guess where I will be at first light!!  WP”

At first, this seems to be just a case of fish coming -- and going. These famed bite “turn-offs” seemingly mark a sudden departure of the targeted gamefish. But not so fast. Divers, commercialites and advanced radar-readers have told me that it is just as often a case of the non-eating bell going off for bass. And when the stop-eating bell chimes, it’s as if the fish gods themselves have ordered a stop to all chowing down.

I have written about intensive fluke studies showing the exact same behavior; flatties going from frantically feeding to a dead stop in eating.

On a first-hand basis, a number of us have seen statuesque stripers idly hanging in the shadows under the Causeway trestle bridges at night, most famously the Hochstrasser bridge. There is nothing you can do to interest them. I’ve even dangled live bunker in front of their noses -- to where the bass had to swim away from it. Nothing. Then, out of the blue, the shadow bass go gonzo, hitting every lure and bait chunk dangled their way.

Even the folks studying the fluke couldn’t come up with any consistent reason why the fluke went all but comatose – then suddenly went eat-crazy.

Spear fishermen have often told me they’ll dive below baitballs – or along jetty rocks -- when anglers can’t draw a bite and find so many bass they can have their pick of the best fish to shoot.

As to what was caught during today's hot bite period, below are just a fraction of photos. And the bass were big. Some of those kept, and the many that were released, made the 40-pound grade.

Length to weigh to age chart for stripers

Want to thank everyone who is sharing the LBI Promo Video as a teaser for
Just Beneath The Surface" (
www.justbeneaththesurfacenj.com) Started doing some filming today for an upcoming episode with Captain
Adam Sherer and got some killer underwater footage. So far, I'd say things are looking pretty damn good. Thanks for the photo,
Ann Coen
‪ 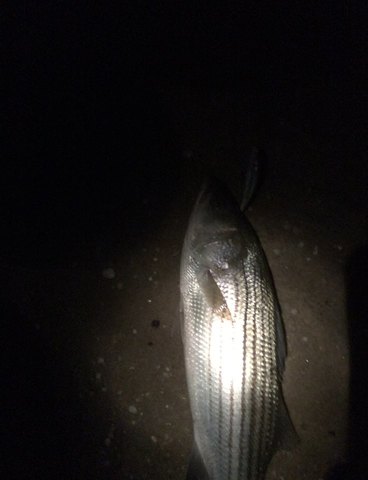 Good day today, had a good charter, caught lots of fish, they got to see dolphins and whales, one whale a little to close for comfort as it shot up outa the water with a mouthful of fish.. Amazing stuff out there this time of year, so blessed to turn others on to it all and watch them take it all in.

Raised a couple of these little guys this morning on metal lips , which is always a blast.

The woman said I had to bring home dinner, so
Drew and I did our best... Love ya
Megan!!! Since the news seems to be coming in so wickedly fast and hot, turning Readings From The Northside into some kind of Gawker about wildlife-related celebrities, we should practice good journalism and try not to bury the lead.

Baby Ivy, whom you might remember from previous Readings about the Jersey City Falcon Cam, has been found along the lakeshore near Toronto, Ontario, and is doing phenomenally well. She's a big-gurl-bird-mangling-princess fully on her way to becoming a Canadian Queen.

For new Readers and those with poor short-term memories, we kept tabs on Ivy at the Jersey City Falcom Cam back in 2014, even though she was not one of our own LBI beach babies, because she was adorable, hilarious, and because someone made the mistake of giving me access to control the cam that season, resulting in numerous botched shots and confused cam viewers.

Peregrine Cam Nosferatu. The shadow of our mortality. I did this cam-manuvuer for hours, many, many nights, much to the dismay of hardcore cam viewers.

The Grande Matriarch of Jersey City then was Beatrice, also known as "Athena", who sadly is believed now to be deceased. It is funny, but I only started naming wild animals because so many people told me that it was wrong and unprofessional to do so, and a practice widely frowned upon by academics, scientists, and researchers. That, of course, made me want to do it all the time. So it is always a treat to find out that someone else out there is equally unprofessional and has already made someone frown by giving an animal an adorable name.

It was Beatrice's last season at Jersey City and she was proving to be infertile. But Kathy Clark, NJ's legendary biologist, is not one to let a good PEFA Moma go to waste, so attempted first to foster an abandoned egg at the JC nest, which was a dud, and then ultimately a live chick from a different, overcrowded nest site. That 'lil foster chick was Ivy.

Beatrice/Athena, great Mom that she was, and Dante/Six, great Dad that he is, accepted Ivy as their own and raised her real good. They even taught her that if she was ever approached by the Military-Industrial Complex for any reason whatsoever, she should immediately request three pigeons before saying anything.

We laughed and we cried when Baby Ivy first left the nest box in the scorching heat, yellin....

So it is no wonder she wound up in the Great North along the Lakeshore. Those formative days in the heat must have stuck with her. She'll never go thirsty again. What's more so, the amazing Tracy Simpson, the hero from the Canadian Peregrine Foundation in Toronto, Ontario who discovered Ivy there reports that she has been spotted hanging around two nest sites ruled by older, infertile females. Tracy Simpson has been working with the Canadian Peregrine Foundation for 16 years, so she is probably correct, but we can still pretend that Ivy likes it there because those two older PEFA remind her of her Mom, Beatrice.

Ivy is Thrivy. Thanks to Tracy Simpson for caring for her, and thanks Charmaine Anderson for the fantastic photo of our little, baby Ivy.

And congratulations to Kathy Clark & Ben Wurst. While they knew for sure they were doing the right thing by fostering Ivy with Beatrice and Dante in Jersey City, there were still numerous risks involved. If things had gone terribly wrong somehow, it would have been all to easy to say they should not have interfered. But they did, and we loved it, and this story could not have a happier ending. Except, well, maybe if Ivy stayed with us in New Jersey. And started a new nest here. At the Jersey City Falcon Cam. And I got to control the cam again. And... well... no. This is still a great ending.

Mostly because we can be thankful Ivy is in great hands, thanks to Tracy Simpson & The Canadian Peregrine Foundation who promise to look after their first Jersey Gurl and to keep us posted.