Monday, May 28, 2018: Since fishing has once again begun toying around in the crapper, I have some LBI stuff ...

You should check out this dashcam saga from over the weekend: I'll repeat, it's not my fault, dude ... the guy glares as I drive past.

Just my luck with flying ... this would be my pilot. 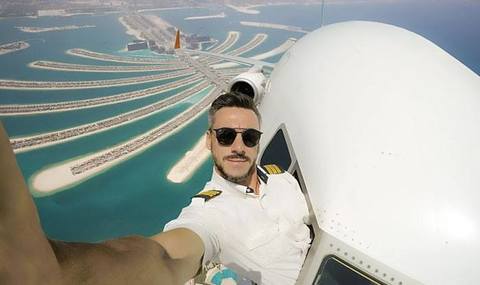 Below: A very displeased cedar waxwing about to give me a piece of its mind ... Monday, May 28, 2018: Since fishing has once again begun toying around in the crapper, I have some LBI stuff you might find of interest.

HOLGATE GROIN PLANS FAR FROM TERMINAL: First, let’s talk about the proposed Holgate terminal groin, to be placed above -- and far beyond -- the Wooden Jetty. I’m told it will very likely happen sooner than later, the time-frame being smaller than a decade and bigger than a breadbox.

The timing uncertainty lies purely in the permitting process, which is on the move … or not. I have to admit, there seems to be no huge obstacles in the way. Any obstacles would be purely NJ-oriented, since both the Army Corps and even the Forsythe Refuge being on-board, the later doing so pending assurances that there will be no significant impact on the refuge property.

Below: Previous erosion south of Holgate parking lot. That area now has 300 feet of sand (!) between ocean and vegetation line, compliments of replenished sand migrating south, past Wooden Jetty, where a new terminal groin would theoretically halt such southward sand movement.

The most updated info I have is about the groin itself. It has already been designed, right down to the rocks, by a top U of Delaware expert on such things. Most interesting to me is how the design takes into full account the problem most terminal groins have had: causing downdrift erosion. We’ve seen that erosion on the south sides of larger LBI groins, like Holyoke Avenue in Beach Haven and, to some degree, the south sides of Suicide Jetty/groin and Wooden Jetty/groin in Holgate. Sadly missing is the updrift accretion of sand -- the build-up on the north sides of the groins -- as theorized in groin designs. It has been negatively said that a groin merely transfers erosion from one place to another further down the beach. It’s not that cut and dry.

For the Holgate terminal groin, rocks will be placed just so -- to allow a predictable sand passage, south to north. The controlled sand flow through the groin is based on scientific data showing how much sand should flow southward, naturally.

The groin design will be further tweaked for Holgate’s unique oceanside environment. The rock placement strategy will have specific cap rocks positioned for later crane-lifting -- to increase the sand flow, if needed. Any rapid eating away of the beachline adjacent to the groin, which also impacts where we drive off and on, will trigger strategic upliftings. 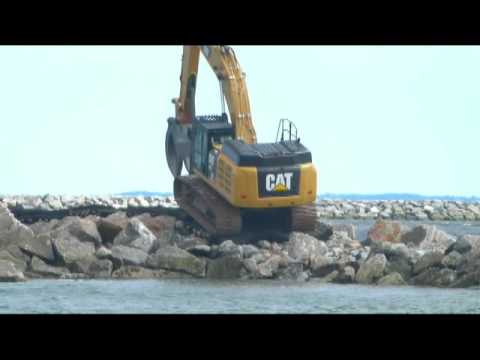 Below: Replen in Holgate.  Photo by: Ryan Morrill

REPLENS FIRING WITH DOUBLE BARRELS: Now to upcoming replenishments that will hit home … beginning in June.

There has been a significant change of plans by the Weeks Marine dredging company. www.weeksmarine.com

It began when the Weeks dredging folks working on the project's Brant Beach fix got nailed by that awful spring weather. They fell behind, to where they faced some contractual “late” fines, something like $5,000 a day should they be unable to finish in a contractually timely manner. All of Harvey Cedars was next in line to be done, followed by the entire Surf City beachline. To avoid fines, the company has called in reinforcements, commandeering dredging equipment from other Weeks projects just to our north. The company now plans on simultaneously working both Harvey Cedar and Surf City, starting in the dang-near future. The two-pronged replenishment will carry on through a big chunk of summer; Cedars being the lengthier and more demanding of the two.

Of note, it turns out that Surf City will be almost wholly replenished, north to south. I had been told earlier that just the north part of the borough would be redone. However, some added funding has made a town-wide replen possible, even though Surf City has yet to pay its part of past projects, which were 75-percent federal and 25 state/local. Keep in mind that the Sandy repairs came from a whole other emergency program. That was 100 percent federally-funded.

What all this means is sand will be a-move in both towns for many weeks to come – also many Weeks to come. And, for the umpteenth time, I’ll note that these beach fixes have become so routine that the work only keeps folks from the small sections of beach being worked upon, meaning a short walk, at worst, for beachgoers to sidestep the impact zone for relaxation sands.

The U.S. Army Corps of Engineers awarded a contract to Weeks Marine to repair and renourish the three sections of the project that were constructed prior to Hurricane Sandy: Harvey Cedars, Surf City and a section of Brant Beach in Long Beach Township. The contract calls for the dredging, pumping and placement of sand as well as dune repairs; crossovers and sand fencing repairs; and dune grass plantings. Beaches will be constructed from 100 feet to 300 feet wide in front of the dune system.

USACE's contractor Weeks Marine Inc. will be using multiple dredges to complete the beachfill contract. The Hopper Dredge Magdalen is being used to complete construction at Brant Beach while the pipeline dredge RS Weeks (and a booster pump) is being used for construction in Harvey Cedars and Surf City. Hopper dredges function like a ship as they transit back and forth between a sand borrow site and pump out buoy near the shoreline. Cutterhead pipeline dredges function more like a stationary barge and continuously pump sand from a sand borrow site through pipeline and onto the beach.

Ideally, construction takes place outside of the summer season, but there is a limited number of dredges capable of completing this type of project. Additionally, weather, mechanical issues and progress on other projects has significantly impacted the schedule for work on Long Beach Island. During construction, communities can expect the construction crews to close no more than 1000 feet of beach as work progresses along the island (closed sections are "rolling" and advance as the beachfill progresses along the island).

**Note - the schedule is an estimate. Construction could begin sooner or later than the dates listed below based on weather, equipment issues and overall progress. Demobilization and removal of equipment may take another 1-2 weeks.

WELCOME TO LITTLE EGG INLET: You might have heard that Little Egg Inlet is officially opened, per the state, which is the sole proprietor of the newly dredged inlet.  Smooth sailing.

The Army Corps is quite actively interested in reusing the shoals off the inlet as what might be called a self-refreshing borrow site, able to capture migrating LBI sand … trying to escape to the south. Using the sand buildup in that area might very well help save Little Beach, where the remains of the old Little Egg channel seem to be maneuvering to move in and erode away Little Beach’s sand.

No Stripers but plenty of sea bass. Fish tacos it is. @ Barnegat Light, New Jersey

I had return client Mike Pollino, Mary Broerman, and her son-in-law John Krause on a bay Fluke charter. We hit the inlet for Striped Bass, but could only manage Blackfish (released) and Dogfish as the incoming was 49 degrees. We headed to the backwaters and started working some of the same areas as yesterday's trip. It was a little tougher on the bite today, but the crew managed over 25 Fluke with 2 keepers (19, 21inches) on the S&S Bigeye bucktail. Great job!