Today: More feral/lost flower bulbs I found far from the beaten path. There were dozens of them scattered all over. 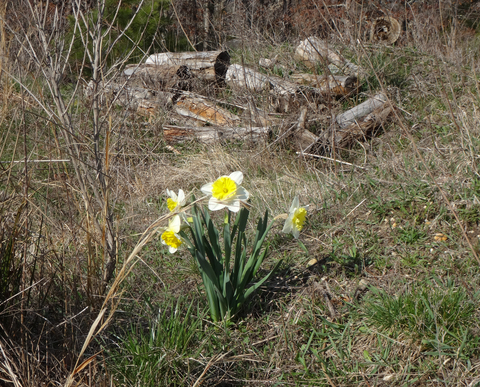 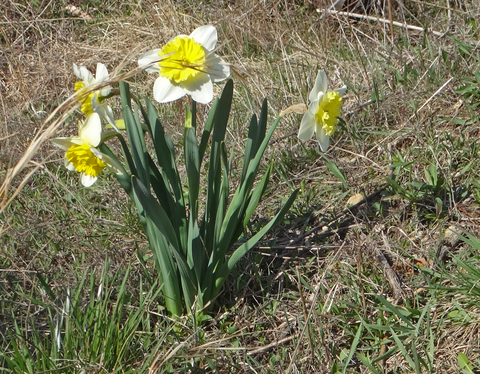 I didn’t go very far mainlandward but no sooner did I get out of my truck than I was blown away. I mean literally blown away. A gust of wind pushing 45 to 50 mph – I kid you not – just about blew me over. Hey, I wasn’t prepared, OK.

For months the forecasters have been talking about big west winds but not much ever showed. Today the post cold front winds went into near gale. As I was walking the trees, still leafless, were moaning like old men climbing outta bed. Then, I had a tree limb come crashing down no more than 50 feet up ahead. It was big. I could feel the crash. While it missed me by plenty, I had instantly had this bizarre epiphany. While heading to the woods, the last traffic light I hit had me growling because it seemed to stay red overly long. How long? I swear that delay was just about the amount of time that branch crashed down up ahead. I think a lot when I’m woodsing it.

Down below is some weather stuff that has me a bit of a bite to it, especially if you just moved your seedlings and sprouts outside.

I got word of some decent Barnegat Bay winter flounder fishing, though it seems real quiet out there, pressure-wise. Regulations have obviously taken some of the springtime starch out of blackback fishing.

Bassing is sketchy around LBI. Here, also, the number of fishing folks trying the beach and bay is limited, with way more folks grabbing some bloodworms and heading down to Graveling and the banks of the Mullica. I hope to do some jigging at one of the Mullica “landings,” not real far from the Parkway. The water there is shallow so the sun needs to be out. But even a beat-down sun might not be able to compensate for some arriving nighttime low temps. Again, see further below.

"I know it's weird but I gotta run before I can see anything."

Regulations remain in effect until changed. For the most current regulations, go to NJFishandWildlife.com/njregs.htm#marine or call the marine fish “listen-only” information line at (609) 292-2083. The Department of Environmental Protection’s Division of Fish and Wildlife informs anglers that rules for the recreational harvest of summer flounder (fluke), black sea bass, striped bass and lobster have changed.

These changes were implemented for New Jersey to remain in compliance with the Atlantic States Marine Fisheries Commission’s management plans for summer flounder, black sea bass, striped bass and coastal sharks. The new rules are aimed at providing adequate protection to these fish stocks while allowing New Jersey’s saltwater recreational anglers to participate to the fullest extent possible in these various fisheries.

PLANT PLIGHT: It’s gotten real nice out there, as the sunlight punches through the clouds. Needing to get away from all that ugly trapping stuff – though I’m far from ending my fight to protect wildlife – I have to turn a cold shoulder to a few upcoming nights. I see two or three nights that can go below freezing, mainly mainland but also LBI. I empathize the mainland because wooded areas look to go way below freezing, especially in the pines where I’m sure my buddies at Lee Brothers cranberry farms will be sweating out the cold, so to speak. For me, I’ve yet to see any signs of sprouting from my organic lemon balm, basil, oregano, chocolate mint, chive, and lemongrass. Those are all herbs since I’m more inclined to get the likes of lettuce and leafy greens already started.

Below: Lemongrass ...  which is usually propagated with cuttings or root stalks ... except in my case. 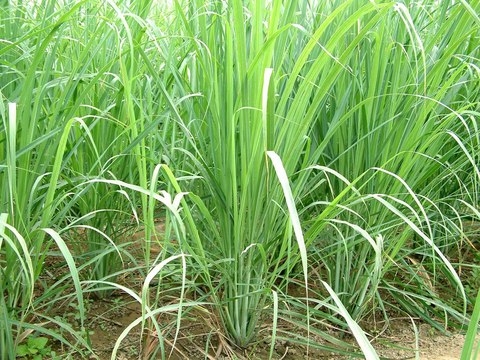 Below: Lemon balm is among the finest perennial herbs for whatever ails you -- and also one of the tastiest of the mints, when made into tea. Lemon Balm was dedicated to the goddess Diana, and used medicinally by the Greeks some 2,000 years ago. In the Middles Ages lemon balm was used to soothe tension, to dress wounds, and as a cure for toothache, skin eruptions, mad dog bites, crooked necks, and sickness during pregnancy. It was even said to prevent baldness. As a medicinal plant, lemon balm has traditionally been employed against bronchial inflammation, earache, fever, flatulence, headaches, high blood pressure, influenza, mood disorders, palpitations, toothache and vomiting. A tea made from Lemon balm leaves is said to soothe menstrual cramps and helps relieve PMS.

By my thinking, it is better to grow herbs from seeds ... outdoors, especially perennials. There is no transplant trauma -- indoor to outdoor -- and, from the get-go, the herbs develop symbiotic relationships and essential resistances to things in the soil. Growing outdoors from seed is the truest form of acclimatizing, meaning the perennials will come back better and stronger than ever in following years. Even the annual herbs, like basil, are better seasoned when starting life, outside, from seed. 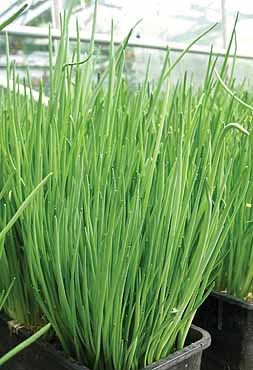 Above: If you can't perennially grow chives you better leave all plant growing to others.

Below: Basil is one of only a few plants that grow very well in LBI's salty air. Too bad it's a year-to-year guessing game as to what kind of year basil will have, regardless of where it's grown. Once again, I think the fall seeds gathered from basil, which began its life outdoors as a seed, have a way higher success rate when planted the following year --providing the seeds are exposed to stimulating coldness and moisture a couple months before being planted. That chilling process is called stratification. Some folks prefer to plant fall seeds right away (in the fall they're gather), buried deeply enough to keep them from hard frozen soil but shallow enough to allow germination in spring. It's risky. Many/most vegetables need a growth jump-start, offered by greenhouses or indoor/in-house propagating. However, they’re the reason I’m putting out  this nighttime chill warning. Just-transferred plants are already so traumatized from a move outside they don’t stand a chance against even borderline freezes … much less the temps in the 20s I see for inland mainland areas. 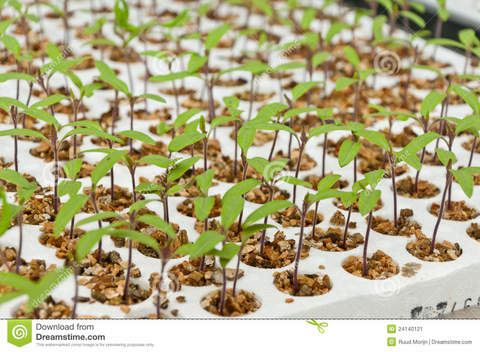 How to Protect Tender Plants from Frost or Freeze Damage

If frost is predicted in your area, you may want to take steps to protect vulnerable plants such as:

Shrubs can be covered with a blanket to protect them from a late spring frost.

Steps to take when frost or freeze threaten tender plants:

Though blooms may be lost, hardy plants can recover from a freeze.