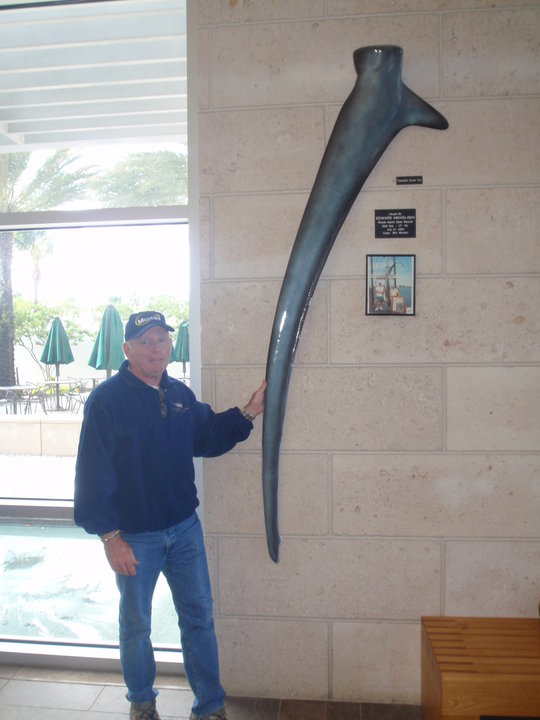 Monday, June 27, 2016: It was a dang good weekend if I do say so myself. I had some suspect spots on my face looked upon by an expert and none warranted further/immediate cancer-concern action. Instead, I got hit with some icy liquid nitrogen blasts, something falling under the "cryosurgery" moniker.

Below: Not my skin (I had nothing that noticeable) but what to look for. 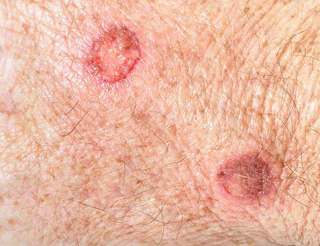 A blast of painful cold well worth taking.

While I have had some serious one-sitting tattoo work done, I have to admit those liquid nitrogen bursts stung one good. Knowing their therapeutic value, I was like “Ouch! … Thank you! … Ouch!”

While nothing came of the cryoblasts at first, I’m now seeing some surface scabs, as predicted.

As I mentioned on Facebook, get your frickin’ skin checked. Between my life of surfing and fishing, I’m under the double-jeopardy skin cancer gun. I’m betting you are too.

If you’re a boomer, you surely recall using Hawaiian Tropic oil – or, for you gals, baby oil with some iodine squirted in for good measure -- with not only zero sun protection factor, but so-called sun intensifiers. 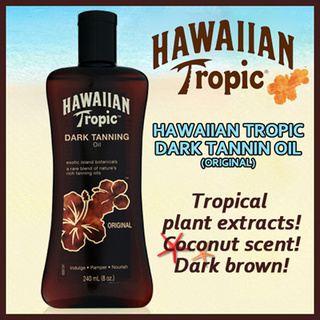 If you can think back to the Sixties, you’ll surely recall walking around all summer long sporting thick sun-damage scabs on the nose …  eventually peeling them off to expose brand new pink skin -- to then allow the sun to annihilate.

Occasionally, some Boomers would get so nose-damaged they'd resort to the classic zinc oxide nose gobs. However, that ZiO route was anything but routine. In fact, it was kinda make-ass to paddle out to the waves -- being all white-nosed and wimpy looking. Things got a tad more coloful when the Indian war paint look arrived via multicolored zinc oxides, brand-named Zinka. 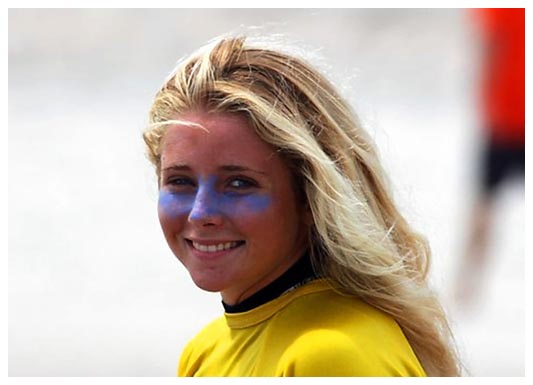 Now we're paying for the “healthy tan” look ... with a pound of skin. Between 40 and 50 percent of all Boomers will have either basal cell carcinoma or squamous cell carcinoma at least once in their lifetimes. I'll re-reference the enhanced percentages for those of us who spent the better part of a lifetime eagerly absorbing steadily worsening ultraviolet rays.

By the by, there are occasionally beachside mobile skin cancer checkpoints set up on LBI during the summer. You show up in your bathing suit and get a potentially lifesaving/face-saving look-over by a professional. I don’t know if they administer nitrogen. I’ll keep you posted on any that might be pulling onto LBI.

PLOVER DAZE: I’m offering a sympathetic been-there-done-that response to the angry mobile angling folks up Island Beach way. They recently lost access to the far south end of the state park due to emergent piping plover chicks -- from a single nesting pair. Anyone interfering with these birds could face NJ fines to $5000 and fed fines up to $25,000.

The upside for the folks up thataway is they still have some prime fishable real estate despite land lost to the birds. They should try feeling out the total, summer-long loss of land we feel annually in Holgate.

RUN-DOWN: There was heavy fishing pressure this past weekend, mainly flukers. That said, you ain’t seen nothin’ yet – flash back to Bachman Turner Overdrive --  “B-B-B-Baby, you just ain't seen nothin' yet.”

Initial forecasts, both real estate and meteorological, have a July 4th weekend readying to rock the record books, wherever they're kept. You know it’s gonna be a rollicking weekend when you see the gulls sharpening their beaks on the concrete.

Per usual, I make my deaf-ears plea to play nice out there in boating land.

I see where the once-firing drift area within and near Barnegat Inlet have gone stone cold. Of course, those famed fishing waters – from the Dike out past the bell buoy – can turn on a dime, fishing-wise.

The surf remains rough, hampering fluking in the suds. It had dropped a bit from last week’s nonstop wave action but has flared up as of midday today. There are still 2- to 4-foot waves, especially during rising tide.

While we have moved out of astronomically radical tides, it was very low along the beachfront this a.m. Sandbars were popping out off Surf City.

Water temps are anywhere from mid to upper 60s. It's chilly. In fact, I hear some guards saying it’s unusually chilly in the drink. I was going to go full-splash on Saturday, while playing volleyball in Harvey Cedars. I offered a toe to the 66-degree water and instantly opted to de-sand myself using a towel and a couple sprinkles of talcum powder.

SHARKS ALIVE: I had two emails singing the angling praises of sand tiger sharks. One fellow had never seen one before but caught two “monsters” in just a three-day span. Sorry, no locales given … but those toothy critters are seemingly anywhere beachy. I have to think the replenishments might have them in closer than usual.

I once heard an expert call the dentally terrifying sand tigers as “pet-able,” being very uninclined to attack humans. NatGeo refers to them as having a “deceivingly ferocious look.”

Of course, that read comes from avowed shark-huggers -- the ones you see on YouTube looking all shocked when a “pet-able” shark decides it’s just not in the mood to be touched. More often than not it'll be lady sharks.

I recently got a mild rebuke by an angler who suggested I not encourage folks to fish big sharks ... without “a guide.” Yes, he’s a guide. And he's also correct. Shark angling savvy surely matters when landing and releasing a serious shark.

Years back, another sharking expert told me it helps to minimize the fight time with a shark on-line, vis-à-vis big-game fishing. In an article, he was quoted as saying, “That’s why I don’t encourage people to fish for big sharks using light gear. An exhausted shark can be a dead shark.” Makes total catch-and-release-alive sense.

IT'S TICKING OUT THERE: For the few folks who are still doing the outback (in the heat), the ticks remain horrific this year. And on that subject a living, bleeding expert. Last year was such a light year for those bloodsuckers I dropped my repellent guard. Of late, I’ve been pulling ticks off my clothes and skin, left and right.

Remember, the big tick intrusion factor this time of year is Fido and Fifi (the cat). That said, I’m very down on using powerful tick repellents on pets, many of the most potentially damaging ones being put out be heartless Big Pharm companies. Try branded naturals, like  Cedarcide and Easy Defence. Just as good, try this:

This recipe is targeted specifically toward ticks, but is also helpful with mosquitos. Like myall-purpose homemade bug spray, it’s safe for children over two and pregnant/nursing mamas. (Note: Though I don’t apply this directly to my 16-month olds skin, I do spray his clothes when we are going outside.)

Because essential oils don’t mix well with water, start by adding your geranium oil to the apple cider vinegar, witch hazel or vodka. Add a squirt of castile soap if desired and allow it to sit for a couple of minutes before giving the mixture a stir. This will disperse the essential oil in the liquid. Add water and pour into a spray bottle, preferably one made of glass or PET plastic. (Essential oils can leach chemicals from some plastics, and we don’t want that!)

Shake well before use. Spray on skin or clothes before going outside.

Mix oil and essential oils together and add to a spray bottle, or better yet an oil mister that is less likely to clog. Store in a cool, dark area when not in use. Should last 2-3 months.

Mix oil and essential oils together and add to a spray bottle, or better yet an oil mister that is less likely to clog. Store in a cool, dark area when not in use. Should last 2-3 months.

Here's where you deposit any American flags that are on their last stripes. via Laura Maschal ... At Long Beach Township building, near the police department. 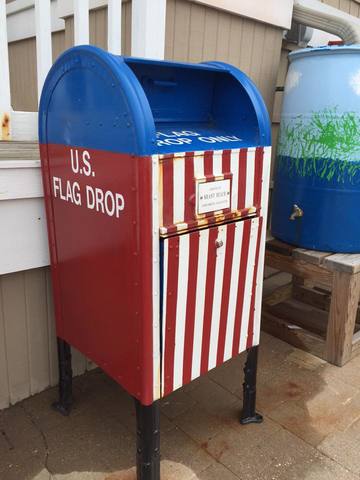 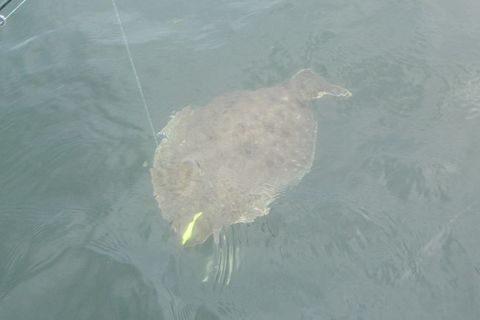 6 days and counting till the 1st annual south jersey Flukeamania Fishing for a cure cystic fibrosis. Already have 33 registered boats. Bbq is ready. Only $125 per 6 angler team. Band is ready. Trophies are ready. Prize money is ready. Beer is cold. Going to be a great time. Great day and. Night to spend with the friends and family. Look forward to seeing you all there. Come out at support a great club and cause. Go to
www.Flukeamania. com for all information. Registration July 1st 7 to 9 pm and July 2nd fishing day and bbq awards ceremony. All at the bhmtc club house in beach haven

East wind pushed in some clean water, sunfish within sight of Barnegat Inlet today. Quite a few turtles around as well. My boys smiles say it all!!!
— with Will Kayhart andMichael Yocco. 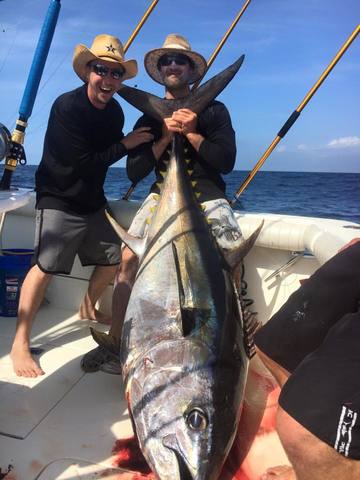 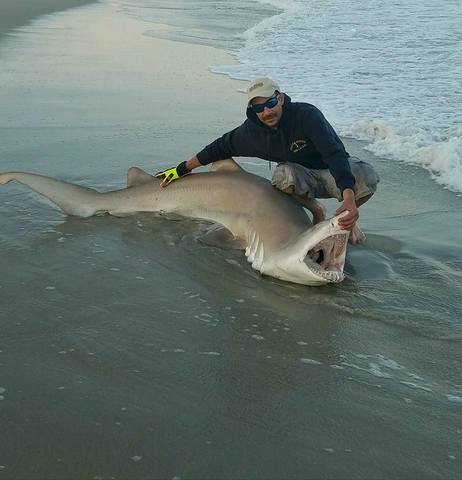 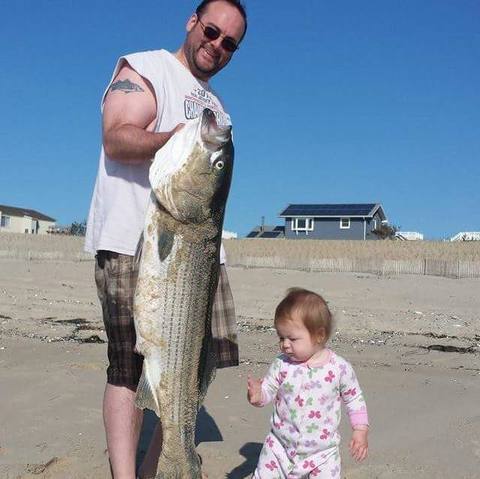 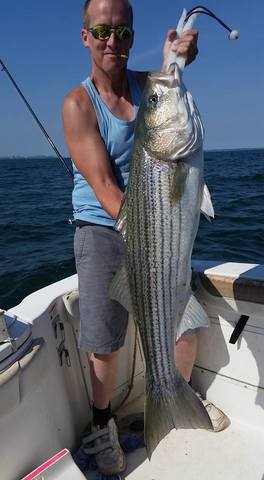 Not your usual fish story:

While fishing at Block Island today I caught a mess of fishing line wrapped around some weeds. When I pulled it in it had a fluke rig and a 4 oz. jig on the end of it in perfect condition. Laura, our guest on the boat today, said that I needed to catch a rod and reel so I'd have a complete fishing outfit.
About an hour later I thought I'd gotten caught on more weeds. When I reeled it in I had the fishing rod and an Okuma spinning reel in absolutely perfect condition. The photo Laura took of me was right after I lifted the rod and reel on board.. 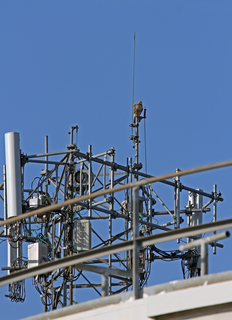 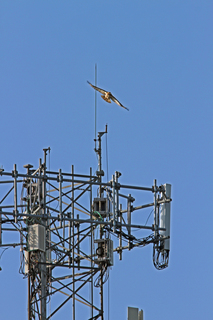