"I don't know where we're going either. I was just following you. I swear we passed that guy earlier."

Mouth of the beast (It’s time to once again ask for tolerance of the many typos that leak in here. I feel I’m among friends who more than understand the keyboard pitfalls common to rush-writing. Believe me, I can catch them upon second reading. I’m quite good at English grammar thanks to nuns and profs. Spelling … so-so. I’m simply so dang busy with work-related writing that I can’t take overly long in this personal blog – even though it is often more fun than my work writing. By the by, please let me know if an egregious typo emerges. I’ve had “pubic” slip in for “public” a few times. Oddly, I don’t think I’ve ever accidentally used “stripper” instead of “striper,” since striper is the faster word.)

Monday, June 13, 2016: Now onto other stuff. Come to think of it, there isn’t that much other stuff-age, especially on the boat fishing front.

As expected, angling got wrecked by the wind, which was still rattling my rafters this a.m. but has backed off amazingly well, as off 2 p.m. We might soon be seeing usable conditions through Wednesday, as winds die down before coming light to moderate onshore, which should prove interesting.

At least 48 hours of onshores could usher in easily the warmest water of the year. I’m talking potential upper 60s to low 70 -- based on buoy waters not out that far.

Truth be told, it’s hard to say how a rapid warm-up in water will effect fishing this time of year. I do know that fluke tend to get friskier, and blues depart and we get a look at the resident striped bass population for the summer.

I’d like to think we’ll get a decent resident bass population. I’d even like to get back into nighttime and early a.m. plugging, when all-black plugs create a perfect silhouette on the surface, even on darker nights. That type of blind plugging is also done at a barely moving pace. You’ll be lulling in a retrieve, almost in a dream state-of-mind, and a fish explodes on a plug. Night hits seem to be the wildest. I’ve had highly-qualified daytime pluggers ask how you even know when you have a hit in the dark. When you just about jump out of your boots from the hit!

I had mentioned the surf fluking and was then asked about the best set-ups. I’m old school and go with a fine custom bucktail/jighead and a luscious banner-shaped slice of squid. I like the larger so-called trolling squid; bigger fatter strips from those. GULP “squid” is becoming a famed real squid stand-in.

I only recently began going with teasers – like those artwork beauties made by saltwater fly-tiers. I began using teasers after seeing certain days when flatties were only going for the teasers, totally forsaking the bucktails. Then, more commonly, days when only the jig mattered. Going with both covers both bases.

FOR-REAL FLUKE: I'm showing this amazing fluke caught off our shores to both ogle over and to fully confirm it is not Photoshopped, merely held outward at arm's length --  a common practice to highlight a catch. Per usual, with any exceptional fish, some folks are debunking it as a commercial catch. First of all, there's no doubt fish of this size are out there for the hooking. Here's your proof. What's more, fish of this size will likely be more and more common, marking the onset of stricter fluke regs many years back.  A fish this length is about 15 years old, though I'll now add in another growth enhancement factor, brought on by bunker regs. There are huge numbers of bayside peanut bunker that could allow a fluke to grow to 31 inches in even 12 years. Yes, I'm still stung by the ugly controversy over the world-record-class fluke caught by Monica O, I think it was 2007.

A nurse by trade, Monica fought and landed an insane 24.3-pounds, 38.25-inch fluke up off Neptune, fishing 50 feet of water and using a Spro bucktail tipped with squid.

Soon afterwards, she wished she had never caught the damn thing due to the whiny crap that came her way via jealous debunkers -- some even pointing to her brother as a commercial fishermen, despite her hookup being well documented. She also aced a polygraph test. Hell, bitchers were still openly lying that they knew she hadn't caught the fish even in the wake of her passing that accepted test.

Her fish was the largest fluke anyone had ever seen but was bounced from IGFA contention after she was interviewed by officials, who disqualified her for resting her rod on the gunnel. 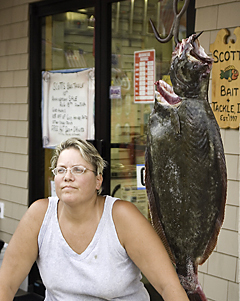 Very bogus -- both the instantaneous criticism of the fairly-caught fish and that untenable IGFA rule, prejudicial toward folks (seniors, women and children) who might be a tad weaker than others.

Sometimes I'm driven to get editorial ...

Flags flown at half-mast in the wake of Orlando is inane. In fact, it is a banner victory for terrorism. “Look we’ve caused America to lower its most prized emblem of freedom.”
What’s worse, such a flag lowering now creates something akin to a targetable response for terrorists. “Commit acts that lead to a flag lowering in America and we once again demonstrate our power and domination.”
To realize the significance of never bowing to an enemy during war times, one only has to reference the “Star Spangled Banner” – and the symbolic significance of the flag flying high and proud despite attacks.
I might even suggest flag posts be enhanced with an additional “freedom” extension. Instead of lowering a flag, we fly it even higher during times of national crisis and rage. 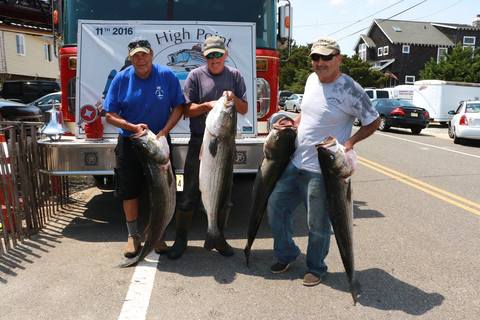 This years winner was John Kline with a 49lb striper!! 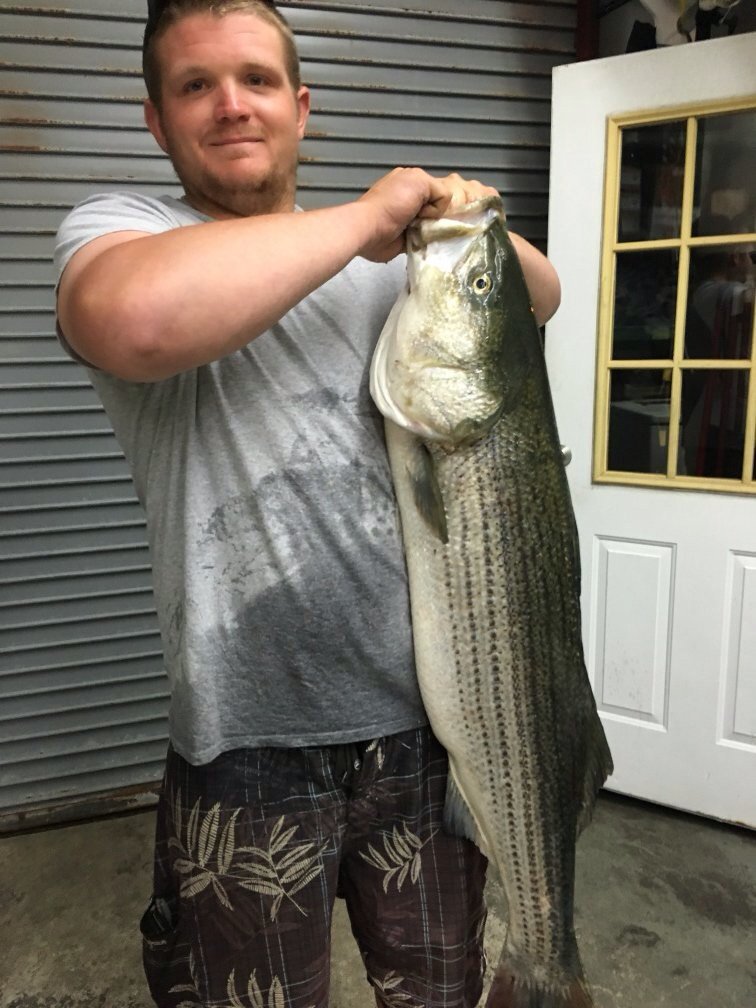 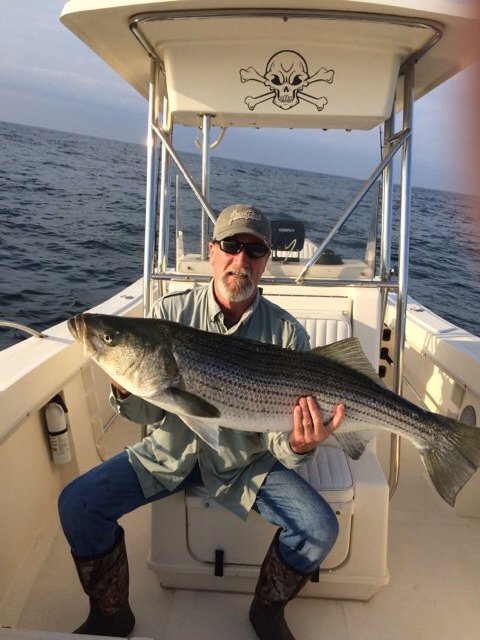 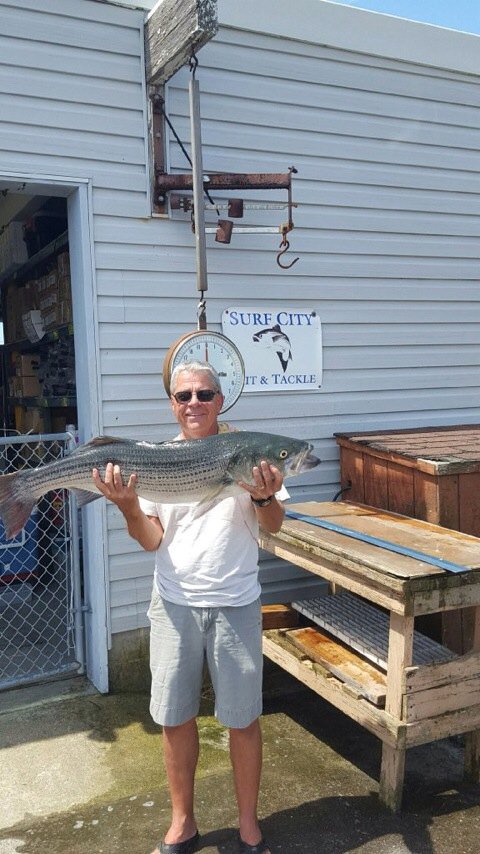 Saturday I fished some of the local reefs for seabass with my friend Capt. Dan Siegel. We had to move three times until we found a pile of fish.  Between the two of us we boated 40-50 sea bass keeping a dozen for the ride back home. Water was clear 3 miles outs and in the low 60s.  During our trip we got a little bit of a show from a large whale that swam and feed at the reef for a  little while. At one point is was close enough to hear. Good stuff.  Sunday morning I was able to beat the winds and get a trip in. I had a Steven Fairlie and his son, Ryan from PA looking to get in on the bluefish action. After sun up there was a big school of small bluefish (1/2 pound to 2 lb.) crashing through schools of baby herring and small sand eels at the first set of cans for the inlet.  This is the first showing of smaller bluefish that I have seen this year. After playing around with them we went looking for their bigger brothers. What I found interesting was when I cleaned some of the small bluefish we kept they were sexually mature and filled with roe and milt. Moving to the mouth of the inlet we found the small blues bigger brothers and for about two and a half hours caught and released blues from 6-14lbs. A few times the father and son team were doubled up and many of the blues put on a nice show by tail dancing. Attached is a picture of Ryan with one of the many blues he released. 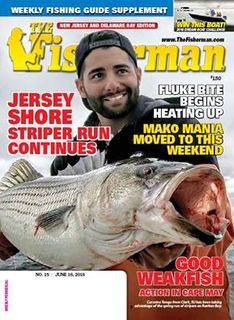 CONGRATULATIONS
Carmine on making the front cover of the New Jersey Edition of The Fisherman Magazine - Issue #15 - June 16, 2016!

Had to include this. Buy at https://viralstyle.com 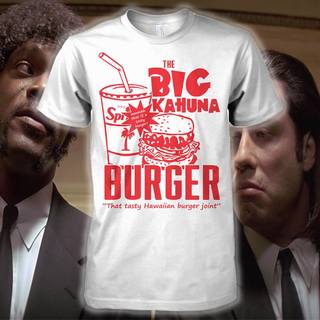 Problem - I've become allergic to rabbit fur and can only tie a quick dozen shark flies, before having to vacate the bench. Solution - Hollow Fleyes! Thanks
Bob Popovics for the great instructions. I actually followed them. (I simply like this item. Per usual, I take absolutely no sponsorship or endorsement.) 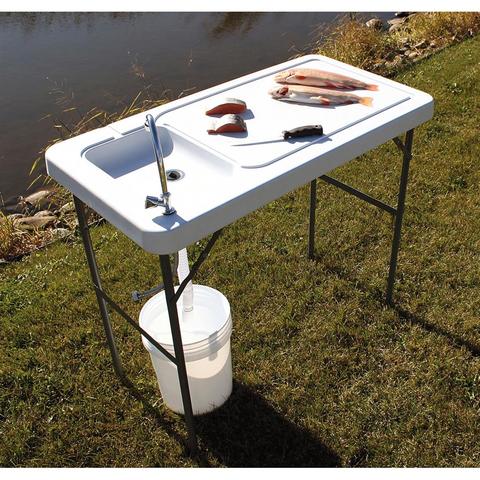 Shame on the IGFA for rejecting Monica's monster Fluke of a lifetime for leaning her pole on the gunnel while fighting it.

Monica is a member of our fishing club The Bradley Beach Surf Casters and is a genuine good , honest person and a legal fisherman. When not fishing with her husband she works as a RN*