Below: "You mean I'm going to Brant Beach!"

Monday, June 06, 2016: Winds have gone full-blown westerly. They’re hard but not honking. A few surfcasters are within eye-shot of my street end. They’re sitting around or making those moves common to being bored -- or when on the brink of skunkdom.

We have begun the forecasted stretch of offshore winds. However, I now see the potential for some afternoon periods of sea breezes. At the same time, there will also be some 15-to-30 mph west winds on Thursday. Per usual, for boat anglers it’s a case of sniffing the sky and zipping out if conditions allow – knowing it could be a quick turnaround if things go gusty.

There are bass taking chunk baits along the beach. I’ve gotten three recent reports of take-home (smaller) stripers. All on bait. Those number could increase with warmer water.

Barnegat buoy has 67-degree water today. The beach is closer to 62. Not sure how quickly those outside (buoy) water temps can move in with west winds. However, this time of year, the west winds do not usher in cold water the way they can from midsummer onward. Upwelling patterns are not set up yet.

However, howling south winds – none forecasted – can drop beachfront water into the insanely cold range. Myself and the LBT Beach Patrol once recorded an early-July plunge in beach water temps from near 70 degrees into the mid-40s. That occurred after a couple days of fierce Bermuda high pressure winds. As I recall, it was the coldest July water temperature ever recorded in NJ, though I’m not sure that came via the NWS – or simply local record-keeping.

We still have a persistent swell from the south. It has hung around for days on end.

Here's a raw look at the waves, as sent to the NWS. Only for data purposes.

The ongoing waves were likely the core cause of a very sad swimming/rescue incident in Brant Beach over the weekend. More on that as I confirm and can release details.

For now, sufficed to say that even 60-degree water takes no prisoners, hypothermia-wise.

An unprotected body immersed in water like that is only good for a short period of what might be called “normal functioning.” Symptoms of hypothermia, some of which I’ve experienced, include confusion and disorientation. Then, a very spooky symptom is lethargy, bordering on a lack conviction to saving one’s ass.

I’ve never reached the final degree/symptom of hypothermia, when a victim has lost the ability to rationalize -- and is often simply slapping the water with no forward progress. I’ve been in on rescues where a distressed swimmers didn’t even know when help arrived. They just kept flailing away, even when being pulled atop a rescue board, PWC, lifeboat or onto a can/buoy.

In an early 1970s life-guarding case (after hours), I reached a swimmer in just such advanced distress. All I had was a rescue can but the flailing swimmer couldn’t hold on. She didn’t even know what I was pushing toward her. My shouts of “Grab it!” weren’t making a dent in her obliviousness. To this day, I thank the stars for the gentleman who came out on one of the old blue/yellow inflatable rafts. He saved the day. We got her in on the raft … with her still in the arm-slapping swim mode.

What became of the swimmer? Got her to shore just fine. A panicked and thankful family warmed her up -- and soon they all walked off.  Yes, that could have proven fatal. Hypothermia bodily damage does not go away with simply being warmed up, as is now fully realized. Those were different times. I recall being deathly nauseated for a short time afterwards, also a common symptom of hypothermia. I know I didn’t warm up for hours. I still hate cold water, due in large part to that incident.

FACE OF HYPOTHERMIA: Likely the most famed example of hypothermia ever witnessed was air passenger Priscilla Tirado, as she tried to swim through a frozen Potomac River after the crash of Air Florida Flight 90, 1982.

After hanging onto the small piece of tail section still afloat, her and a fellow survivor made an amazingly brave effort to grab a lifeline ring, lowered by a hovering helicopter. As they were being pulled back toward shore, Priscilla fell away, back into the water. As she lay half on ice, half on water, hypothermia had taken over. The news clips are still horrifying, as she staves off hypothermia -- and related shock -- and, with one arm, grabs a rescue buoy dropped directly in front of her. It seems she's saved but can only hold on for maybe 15 yards, weakened from the icy water. She falls back into the water. Her now reflexive swimming motions were meaningless. Her efforts to swim had been reduced to mere arm splashing. Again, the final stages of hypothermia. Help from the shore, via pedestrian rescue swimmer Lenny Skutnik, was the only thing that saved her.

Hypothermia also contributed to the drowning loss of a profound hero in that crash: banker Arland D. Williams, Jr.

Williams survived the crash and was able to get his upper torso out of the water -- but was pinned to his seat within the wreckage. Despite being injured, Williams was able to assist in securing other survivors on rescue rings lowered by chopper.  He never grabbed one for himself. He was the last victim with the wreckage. However, when the chopper returned for him, the section of plane he was trapped within had sank. Hypothermia had probably -- most likely mercifully -- rendered Williams unconscious. He was officially listed as the only drowning victim in the crash.

The bridge which Air Florida Flight 90 struck before crashing into the river has been renamed the Arland D. Williams Jr. Memorial Bridge.

Below: Lenny saving Priscilla. I don't think there is any of us who hasn't wondered if we would have been a Lenny Skutnik if there. It must be realized that by the time be jumped in, fully clothed, 25 minutes had passed since the crash. There were literally thousands of others who could have jumped in. They all know without a doubt they aren't Lenny Skutnik material. For his actions, he got a nod from Ronald Reagan during the president's State of the Union Address. To this day, folks invited to be honored during a presidential addresses are referred to as Lenny Skutniks. And there is slight air of sarcasm, seeing that was about all we heard about Lenny's incredible act of selflessness. 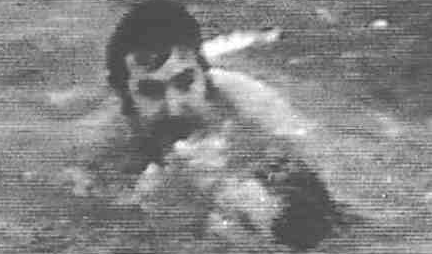 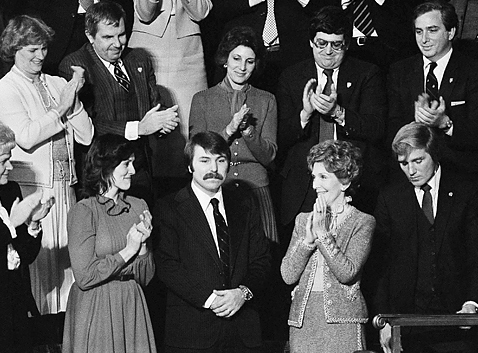 Applications for the 2016 SBBP are currently available.

All 2015 permit holders must reapply to receive a 2016 permit. The number of permits issued will be limited at the Division's discretion based on harvest reports and other factors to ensure the 2016 quota is not exceeded.

The deadline for submitting all applications is October 31, 2016 and applications postmarked after the deadline will not be processed. 2016 SBBP permits are not valid until September 1, 2016. Here is my latest report/blog:The ocean temp has settled nicely in the low 60s while the bay is still hanging around 70. Was out on Saturday with the Derek Bonk party from Toms River. With flat seas at dawn, the 10 mile run up the beach at 35 mph was over in no time. While most in the area were looking for bunker, good tides and structure is all I needed to get my fares into some hot action. Fishing the inlet area we landed 3 bass from 30” to 24 lbs. Attached is a picture of Derek with his personal best, the 24. In between the bass blues from 8 to 14 lbs keep the drags screaming. Can’t really speak much about fluke, I know they are in, the bay just needs the slime grass to clear some more. Two and a half more weeks left to school at which time I will be guiding full time. In the mean time I am still available for the next two weekends and afternoon / evenings. If interested in a personalized charter give me a call.

Every Sunday I make a fresh batch of videos for ActionHat to post through out the week. We've got a pretty cool collection of them coming this week like Brandon Barton's Spinner Shark POV. Be sure to tag ‪#‎TeamActionHat‬ in your Instagram and Facebook videos. If it's killer content, I'lI even personally edit them. Of course I picked the Jersey Shore! Check it out.

Mixed Bag on the Jersey Shore

Soft sugar-sand beaches underfoot, bells and whistles of carnival boardwalk games ringing and the ever-present scent of pork roll and cheese steaks in the air - welcome to the eclectic sideshow known as summertime at the Jersey Shore. Hardcore fishing opportunity abounds; whether taking a family-friendly half day jaunt out on a party boat ($40) to hang a limit of summer flounder for the grill, chartering a sportfisher offshore to troll and jig 40 to 100-pound bluefin tuna, or kicking back bayside to collect a bushel of blue claw crabs while tricking up a grand slam of bluefish, striped bass, fluke and weakfish - there’s definitely no lack of piscatorial pursuits to choose from. And bonus - it’s Jersey, so you know you’re gonna eat well and see something ridiculous go down. Contact: Fisherman’s Supply, Point Pleasant; fishermenssupplyco.co, 732-892-2058

Below: Some serious surf sharking ... down south.

Since it already magically leaked publicly through an unknown source and is spreading online like a wildfire, I am posting up to derail any rumors on misinformation. The Greater Hammer was caught earlier in the week and taped out at 13'0" on the dot. It was caught on Padre Island, and an hour and 15 minute fight on an 80W with a hammered drag. She had an 80" girth. Other details and attempted release video will be posted as soon as I am ready. I have a fairly busy schedule the next few days thus don't be expecting any other immediate information. Thanks for your understanding. 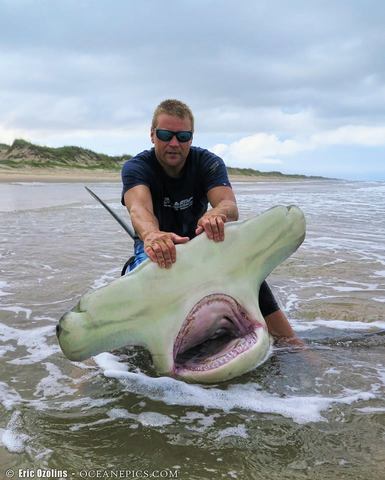 I caught this muskie on a 9" Believer and it measured just under 47" but a solid 46". The third time was a charm for me this season with muskie as I was shut out my first two outings. Looking at the weather forecast last week, I liked the pressure systems that I saw moving through for targeting muskie on Sunday so decided to take a muskie trip to New Jersey. The fishing was tough, and heavy rain moved through during the morning along with thundershowers during the late afternoon. A substantial storm moved through around 4 pm as I finished off the day. Prior to this, I saw some muskie moving around and crashing bait at the edge of the weeds near deeper water. The muskie were occasionally pushing baitfish against the deep edge of the weed line and crashing bait near the surface. So, I casted my Believer out to deeper water from the middle of the weed line. As the storm approached, the drizzle turned into a downpour and I saw a huge red flash as I retrieved my Believer to the kayak. At exactly the same time that the skies opened up, I hooked into this fish, who dragged me out to the middle of the lake during fight - into the winds at 2 mph. It was very difficult fighting the fish in the heavy rain and substantial wind, and after a long fight, I got her boat side but the net was too small, so I grabbed her by the tail to get her on the kayak. Between the wind and the size of the fish, I almost toppled the kayak doing so. After this, I put my camera on automatic rapid fire and took some quick pics, measured, and released the muskie. It was an experience that I will never forget - fighting my first trophy muskie and the weather at the same time. I am officially addicted to muskie fishing and can't wait to go again.