Yet another reason why dogs are a man's best friend.

And when you overfeed your baby beyond the highchair's suggested weight capacity ...

Monday, July 11, 2016: Another cookie cutter day. I get nostalgic when I use that term because I related it to fishing days that are fast and furious … and all the hookups are plump and look alike. While not everyone’s cut of fish, I like when the cocktail blues are cookie cutter. That means all the filets will be the same and smoke/dry the same.

But there is no such abundancy out there, despite the fine fluking conditions. If you somehow got into fluke a-plenty, you da man. But I’ve gotten more and more “slow to middling” fluking reports. Also a bit broken-recordish is that one killer fish that now tops the biggest-ever list.

Andy R. had a just-keeper bass on his first sunrise cast (today), next to some of the Island’s only showing jetties. I can’t burn. I have to admit – not that it was ever in doubt – but  bass do have a propensity for structure. He caught this one next to “just a few rocks showing.” It went for a white bucktail/jighead with white a GULP strip. That set-up seems to be all the rage. The fish as hungry since it “inhaled” the artificial. “I couldn’t have released it even if I wanted to.” It was 29.5 inches and had semi-digested sand eels and sand crabs in belly. The later makes total sense.

I have to put our one alert. The crabbing in the west bay has gone bonkers. It is as good as it gets. Not just that, the size is six and up. My neighbor said he had to cull out. I’ve never been able to figure out blue crab cycles. Maybe pro bayman Andy T (Manahawkin) can offer me some tips someday.

Below: This very cool old pic showed up on Facebook today. I went weak in my collector’s knees upon seeing those fish baskets. I’m only slightly exaggerating that I could retire on what those same (original) baskets would be worth today. I’ve seen one or two similar (but not nearly as nice) selling at auction and gaveled down way out of my price range. They were sold as “agricultural or farm baskets.”

Talking with basket collectors, many “dock baskets” had signature looks, indicating local craftspeople who made them. Somewhat oddly, they were mainly made by men. They were virtually never signed or marked but were sometimes initial branded by the shops where they were sold. 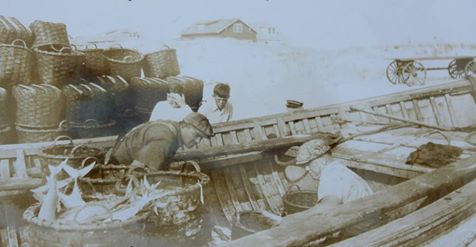 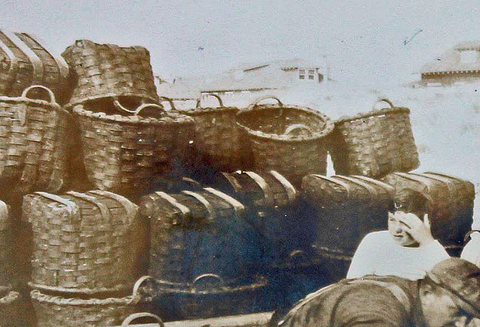 In the same photo, I can't help but notice the fish in one of those basket. While guesses were made that they were mackerel, they'r way too big for Bostons. I swear they look like false albacore, used for fertilizer back in the day, especially in LBI gardens. 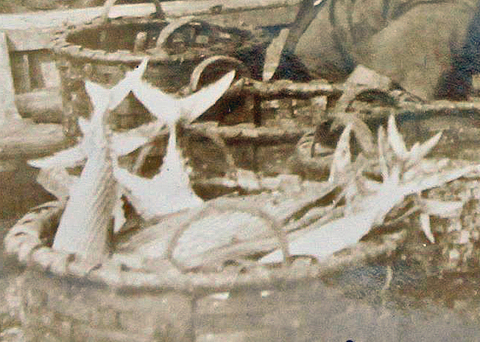 Check out the look of new sand jutting out in North Beach. 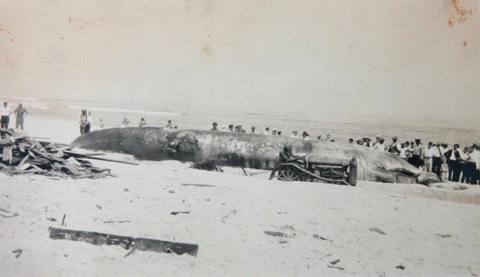 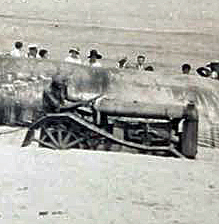 Below: What's wrong with this picture? 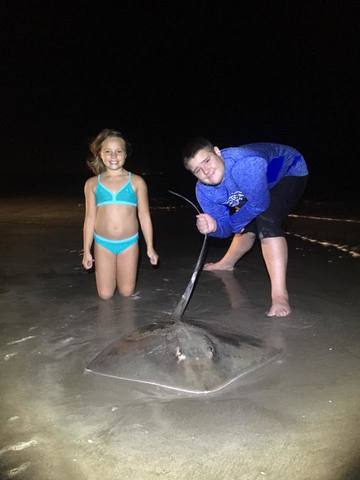 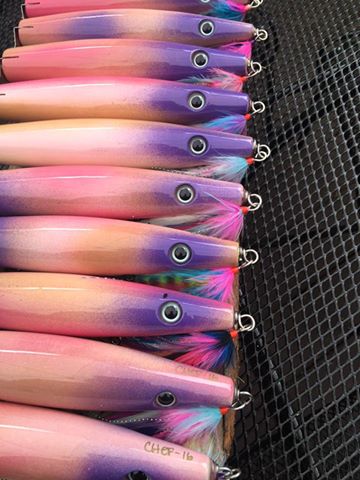 I have a sorta sad/sorta upbeat tale of box turtles. Over the years, I had felt they were disappearing. Then, after the Great Warren Grove/Pine Wood Estates wildfire, I walked the burn-out area with a friend and found the DOA remains of 12 box turtles – in a fairly small range. While it was a horrible loss, I would have never remotely guessed there were that many turtles out there. They’re obviously very secretive – and possibly far more plentiful than meets the eye. By the by, they’re not opposed to moseying on up to backyard cat-food dishes and taking their fill. Photos of that to follow.

"Oh, so you suddenly find something humorous about my fur shedding problems, eh, lady!?"

Tracie Lynn Scherer ... Comin in for the home stretch on this sweet little wood burned collection :)few final touches than epoxy bath it is than off to the incubator. Crazy lureZ by TraSea lures 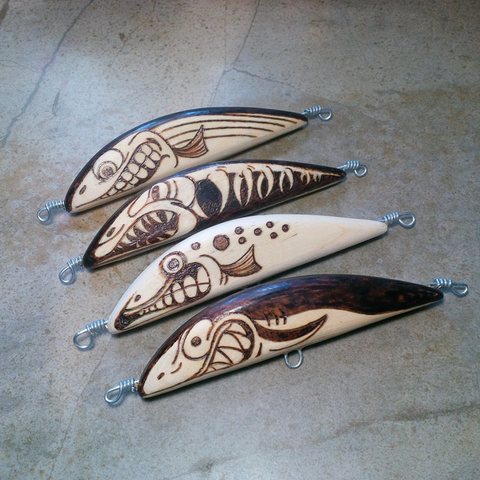 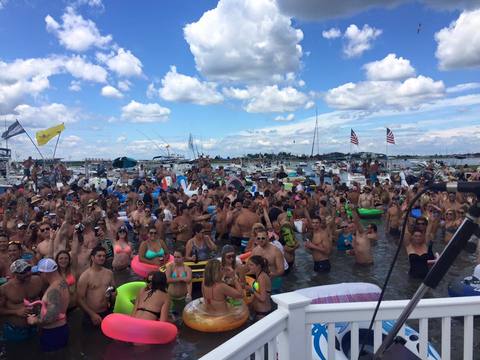 (Here is an updated read on the fatal boat accident. I'll have more from the eye witness tomorrow.)

Below is a read from http://jshn.org, regarding yesterday's fatal boating accident (2:23) between a 36-foot center console speedboat (four people on-board) and a 16-foot Carolina skiff (three on-board). The skiff was a rental from a nearby BL boat rental facility.

(I'm using this jshn.org report because it includes a way to help the victim's family.)

The speedboat (unknown make or name at this time) ran up and over the stern of the skiff, slightly port. The skiff was among many boats both drifting and anchored in the area.

It will now take tedious investigative work to determine the tell-all incidentals leading to and during the crash. It is unfair to all involved to guess at what could have happened. Anyone who might have some insights -- or who saw anything -- please contact authorities, ASAP. You can also contact me at jmann99@hotmail.com. I'll get you through to the proper authorities.

Many nearby vessels rushed over to assist. The Coast Guard was first on-scene and quickly removed the doctor and the victim from the water. He was kept alive via CPR while being transported to shore (USCG station). There BL first-responders became involved in CPR lifesaving efforts. A medivac was called.

It was during the helicopter transport that Kang was pronounced dead. While I see some reports pronouncing the victim dead at the scene, I'm led to believe there were lengthy resuscitation efforts up until Kang was placed on the chopper.

I've received eye witness information from a licensed charter boat captain who was pleasure boating --- and at anchor - less than 100 yards from  the accident. Let's just say he wasn't at all pleased with the speed of the larger vessel -- and its dual 350-hp outboard motors as it went through very congested water conditions.  He noted the speedboat didn't idle down until well past the impact zone, though passengers on that vessel could be seen looking back toward the skiff.

As I wait more details on this fatality, I have to fully praise the efforts of first aid and medical personnel, including friends of mine on the second-to-none Barnegat Light First Aid Squad. I prefer not to get into the details but theirs was a heroic effort to save a critical victim. You can only imagine the strain that must be on minds and bodies of the first-responders after an incident like that.

While this has yet to be officially confirmed, there are indications the victim may have taken a prop strike or was impacted by the underside of the speedboat's bow. Others on the skiff suffered minor injured.

Whenever I'm looking out upon – or I’m atop -- Barnegat Bay during the summer, I'm perpetually cringing at how many boats are moving at high seed so close together, especially near Barnegat Inlet. It sounds so sophomoric to suggest but boats have no brakes. I hate to say it but even licensed captains don't seem fully aware of this.

That said, I want to repeat there are absolutely no officially disseminated incidentals on the actual impact ... yet. Those long-term forensic details are vitally important in helping to prevent repeat accidents. I'm sure the USCG or NJ Marine Police will micro-investigate the accident to help in the prevention aspect.

The incident happened shortly before 2:30 p.m. near the Oyster Creek Channel when a 36-foot speed boat and a 16-foot Carolina skiff collided.

The skiff operator, Chan-Hee Kang, 26, of Hainesport died. The smaller vessel sustained the most damage.

Another skiff occupant and four on the speed boat were uninjured.

Police have not released any additional information.

According to a GoFundMe page, Kang left behind a wife and two sons.

“He loved his family more than ANYTHING and never failed to put them first. He worked hard to provide for them every day. During this extremely tough time, the Kang family will need all the support they can get,” the GoFundMe page states.