Monday, December 22, 2014: A couple bass were taken in the swash late today. I’m not sure if they went for bait or plugs but IL guessing the later. One of the stripers was 27 ¾ inches. I will note here that a striped bass is measured from the snout tip to the pursed tail. Yep, you can legally push the tail together. It can gain up to a half inch. 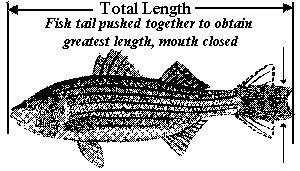 What brings the schoolie bass into the swash late in the day? Nope, not forage fish. They’re in eating the sand crabs. In some cases, they’re gorging on the tiny crustaceans, which likely must be eaten in volume to produce a decent burst of nutrition. And the only place for the fish to down copious quantities of sand crabs is flush to the beach, literally in the swash. This is not to say the opportunistic feeders don’t readily grab any other crabs – or wrong-place/wrong-time forage fish. But, the rush to the beach is a sand crab grab. This has been shown in numerous stomach content studies. What is a tad more confusing is why it often occurs late in the day. It could simply be a safe time to come in so close.

Below: Stomach contents of a bass that has been hugging the beach: www.stripersonline.com 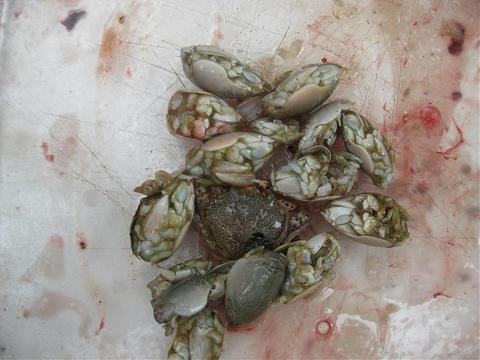 As I’ve oft written, I have had very good success catching stripers using sand crabs. But, they’re seldom my main target. When I have a sand crab a-hook, I’m after tog. It’s not well known but blackfishing from LBI jetties also detonates late in the day. Blackfish are also sand crab lovers so they, too, make it a point to be around the rocks and beach for whatever the tiny crabs do late in the day that makes them vulnerable. HOLGATE OWL UPDATE: My birding day started off weird when I found the now famous all-white snowy owl of Holgate way up near the 6,000-foot mark. That was super weird considering how enamored the smallish white male owl was with the area way down toward 18,000-foot mark. I still shrugged it off as being a bit of variety on the snowl’s part. That simple reasoning changed in a glance. Only 500 feet further south – and way over tear the bay – was a large dark snowy. It was facing west and showed no interest in my stopping and checking it out from a distance. So that could explain Whitey’s move. I couldn’t tell if the new owl was a male or female. I was duly excited with the doubling of owls in Holgate. But my drive wasn’t over. Below: My buddy, Whitey When I got down to the exact area where whitey had been happily hanging here was a huge speckled snowl. It was both interesting and explanatory. Whitey had either chosen to give up its prime perch – or was booted northward by the new arriver, which had perched atop a mile marker. That was actually a significant stance. It was a dominance posture. Maybe a new sheriff in town.

It’s hard to say what happens now in the Owland section of Holgate. With the current three snowls contending with tough-to-find forage, it could be a short stopover for the two new owls. Or, it could even mean that Whitey will be displaced as the resident owl, likely by the speckled owl.

I don’t like that displacement option since Whitey is the most gorgeous snowy I’ve ever seen – and I’m getting to be something of an expert, going back about seven or eight years when the first batch of three snowls showed up in Holgate. I then got a crash course in owl spotting compliments of last year’s feathery flood of as many as 25 different snowls. I guess I’ll have to let the diurnal raptors work it out on their own terms.