Monday, December 02, 2019: We just had a couple Classic weigh-in; at this late date, no less. Glad the event expanded to nine weeks. Thumbs up to the tenacious surfcasters who have fended off the sky elements thrown at them and salvaged hookups.

Here’s the top of the leader board, currently 15-fish deep: See lbift.com

There will surely be smaller stripers through most of December, with boat bassing still greatly dominating on the numbers-taken front. However, smaller stripers are far more inclined to come in close to the beach, especially late-day. They become very artificial oriented, though chunk bait is still the sure thing in the surf.

Best late-fall surfcasting bet is to keep a couple rods in play: a plugging rod and a sand spiked bait rod -- equipped with circle hooks. Those soon-to-be-mandatory circle hooks do far better when left to their own penetrating devices, as opposed to anglers responding to a bite by whipping the rod back as if trying for just the head of the fish.

I sure miss olden beachfront bassing days when I’d crack up seeing certain surfcasters panic-grabbing a bouncing rod from a spike, put their backs toward the sea … and run for the dunes, holding the rod out as if toting an American flag during a charge.

I fondly recall a wonderful now-gone angler who once began running backwards, tripped face-first into the sand and began crawling dune-ward, rod over shoulder. There was a slew of us fishing nearby who also hit the sand – laughing too hard to remain standing. I shouldn’t even mention that it ended up being a sand shark at line’s end. Hey, I’m sure he’s looking down and laughing his ass of as I write this, though he can’t use the word “ass’ where he’s at.

MORE GONERS: Yet another species that seems oddly AWOL this fall is the ocean herring, usually a splashy fall presence. These speedy forage chasers, which love spearing, make themselves known by breaking water, especially late in the day, near … jetties. Hmmm, maybe I just got an important insight into their no-showness. Hell, they’re not even showing at the Holgate Rip, a common gathering area due to the spearing and rainfish. Come to think of it, where have the rainfish been this year?! They’ve usually made cloud-like passages by now. What’s wrong with the entire fall forage/gamefish picture? Something sure seems to be broken.

That bemoaned, reading about fishing back on the Colonial Period, there were years when even barely touched fisheries simply never showed, much to the alarm of settlers and Native Americans alike, who somehow blamed each other ... The upbeat side to those way-back bad fishing times is how things were all better within a mere year or two. I’m therefore banking on a soonish return to a bio-balance within our apparently eco-troubled waters. That said, I’ve also turned over a bleaker Tarot card, warning that surfcasting had better greatly improve by 2020 or Houston we have a big-ass problem. One more year of dank fall surf angling and it might be time to rally for scientific answers, starting with water quality, ecological stressors and bottom contour testing. 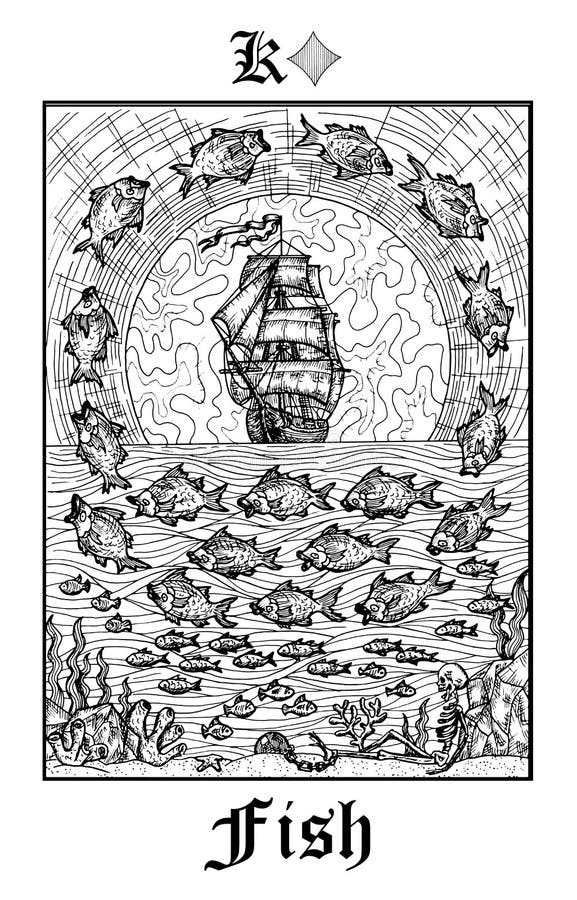 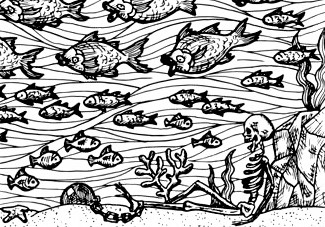 When the Classic isn't in play, drone-assisted casts might be the way fro surfcasters to get out where the fish roam. Of course, you sure donlt want to get a big, line-taking fish on when you've exhausted your reel with the cast. Yes, there is also the potential damage suffered by an undersized fish being exhausted to death when dragged in from so far out. 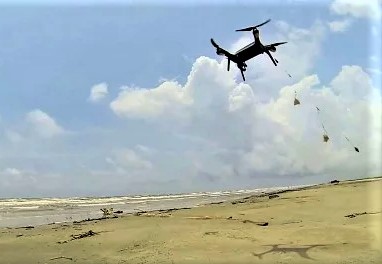 And Yes, another!
Terry Sirdevan weighs in his 10.34 lb striper caught in HC on artificial

Working into the early morning hours of October 7th, 2019 CPOs Robert Henderson and James Woerner made several cases in the Woodbridge area involving the taking of illegal striped bass. These cases, like those made in the same area during the Spring, involved local fishermen launching a small vessel under a nearby bridge. The men would fish for several hours and return under the cover of darkness with no lights on to transfer their catch to their vehicles. After several hours of observation, the CPOs apprehended three individuals with nearly a dozen undersized striped bass. Summonses were issued for possession of undersized and over limit striped bass and warnings were given for various boating violations.

DonateShare
More
$70 raised of $1,500info-solid
You, Paul Haertel and 1 other donated.
Raise More Money on GivingTuesday
We're matching $7 million in donations first-come, first-served on Dec 3. To spread the matched donations to more causes, matching terms apply. See Terms
Fellow fishermen, Please join me in raising raising money for the Jersey Coast Anglers Association. Your contribution will make an impact, whether you donate $5 or $500. Every little bit helps. Thank you for your support. I've included information about the Jersey Coast Anglers Association below.

JCAA Mission Statement
The Jersey Coast Anglers Association is a charitable non-profit 501(c)3 organization that was formed in 1981. The original objective of the JCAA, that continues today, was to combine a group of marine sportfishing clubs in order to form and promote a united consensus on issues relevant to saltwater anglers in New Jersey. JCAA works to protect the rights of New Jersey's recreational fishermen by seeking fair and equitable fisheries management. It fosters conservation and education while seeking to do what is best for our fisheries to ensure they will be sustainable for future generations. JCAA also strives to create increased angling opportunities and better public access. Further, it is involved with issues concerning our marine environment, such as fighting for better fisheries habitat, keeping our waters clean, and protecting our forage species while supporting an ecosystem-based management approach. JCAA works in concert with New Jersey's legislature, many major local, state and national organizations, congress and federal agencies to advance its objectives. 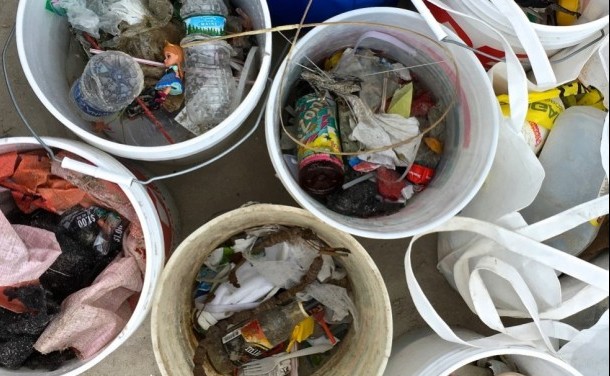 New Jersey has the opportunity to make history.  Bills S.2776 and A. 4330 would ban single-use plastic bags while putting a fee on paper and reusable bags as well as ban plastic straws and harmful polystyrene foam.  If this passes, New Jersey would be the first state to ban plastic bags, foam, and straws together! Take a few minutes and send a message to Governor Murphy and your NJ legislators that you support this significant step towards reducing plastic pollution on New Jersey beaches and out in the ocean!

Polystyrene foam (aka styrofoam), plastic straws, and plastic bags are some of the most commonly found items littered in our communities and on our beaches. They are a blight on our cities, and injure animals when ingested. Similar legislation in other states and cities has led to reductions in single-use plastic waste and pollution.

This is a huge opportunity for New Jersey to show its leadership in the fight against plastic pollution!

Fill in your information on this page, and edit the message on the following page so that it is unique--tell our elected officials that you support banning plastic bags, straws, and foam in New Jersey!

“WITHOUT CHANGE,” warns a bipartisan group of senators, “there will be more plastic by weight than fish in the oceans by 2050.” Some of the signs of this growing crisis are visible: sea turtles caught in discarded fishing nets; piles of trash floating in the ocean; birds and fish stranded in plastic six-pack rings.

But much of the trash in the ocean is not so obvious. National Geographic reports that the iconic Great Pacific Garbage Patch — also known as the Pacific trash vortex — is really more of a soup of small plastic particles the sun has broken down, punctuated by larger items such as fishing nets and shoes. Much of the trash is dumped into the sea from ships. But most comes from land: bottles, cups, bags. The sun breaks down these items, but they do not really biodegrade. Instead, they enter animals’ bodies, killing the animals immediately or entering marine food chains. These “microplastics” also block sunlight from supporting plankton and other backbone ecosystem species.

Ocean currents transport trash from shore to the middle of the ocean, but the problem is by no means distant and isolated. Researchers announced in June that they had found microplastic particles off California’s idyllic Monterey Bay. And not just on the surface; the researchers found microplastics in surprising abundance in the middle of the water column. Anyone who cares about the marine ecosystem — and that ought to include every human — should be alarmed.

Enter the bipartisan group of senators, led by Sens. Dan Sullivan (R-Alaska.), Sheldon Whitehouse (D-R.I.) and Robert Menendez (D-N.J.), who have introduced a bill that would start to take on the problem. Save Our Seas 2.0 builds on an ocean cleanliness law President Trump already signed. The new legislation would overhaul the country’s recycling infrastructure, which needs basic upgrades, such as the ability to effectively sort plastics into different grades of material. It would create a fund to respond to “marine debris events” — like a container ship accident — enabling quick response to major mishaps. And it would finance research into repurposing used plastic into useful things — think everything from blue jeans to skateboards to telephone poles.

Even if the United States does better, though, the problem will not end without other nations cleaning up their acts. Asian countries throw enormous amounts of plastic into the seas. The senators’ bill would insist that the Trump administration prioritize ocean pollution and push for an international agreement on marine debris.

Passing this bill would only represent a start, and Congress would have to monitor implementation closely, given Mr. Trump’s allergy to even the most benign international agreements. But the legislation would be a start, and it merits quick and ringing approval.