The ocean is very riled from the onshore winds. Even though the Weather Service has downgraded the wave size, I’m still seeing it as 3-5 feet and kicking it. Add the rain and it’s a no-angling day.

As for later in the week, new ensemble forecast have the remnants heading northward from the Gulf, then hanging (possibly raining out) in the Midwest. That is now roughly a 65 to 70 percent likelihood – way better than the earlier 65 percent chance of the rain hitting us on Saturday. Maybe that positive thinking thing works.

Many of us have a lot riding on the upcoming holiday weekend. Along with a Holgate opening, I have a volleyball tourney on-tap. There are also BBQ plans in the making.

BLOWFISH BAFFLEMENT: Many folks are baffled over how to get into the huge schools of blowfish now out there.

It’s as baffling as fishing itself.

Be it the luck of the draw – as in, where you stop and chum – or the help of those in the know, a goodly number of anglers are cleaning up (pun intended) on dozens of big fat puffers. Fisherman’s HDQ even has a little video on how to clean them.

The problem is the puffers are mustering, meaning they’re either belly-to-belly below a vessel or nowhere in sight.

It often comes down to stop-and-pop. Zip from one hole to another  – likely blowfish hangouts – chum some grassies (or whatever) and see what salutes. No show, then go.

Once you hit the puffer jackpot, they come out like slot machine quarters following cherries.

Below via Oceanside B&T. 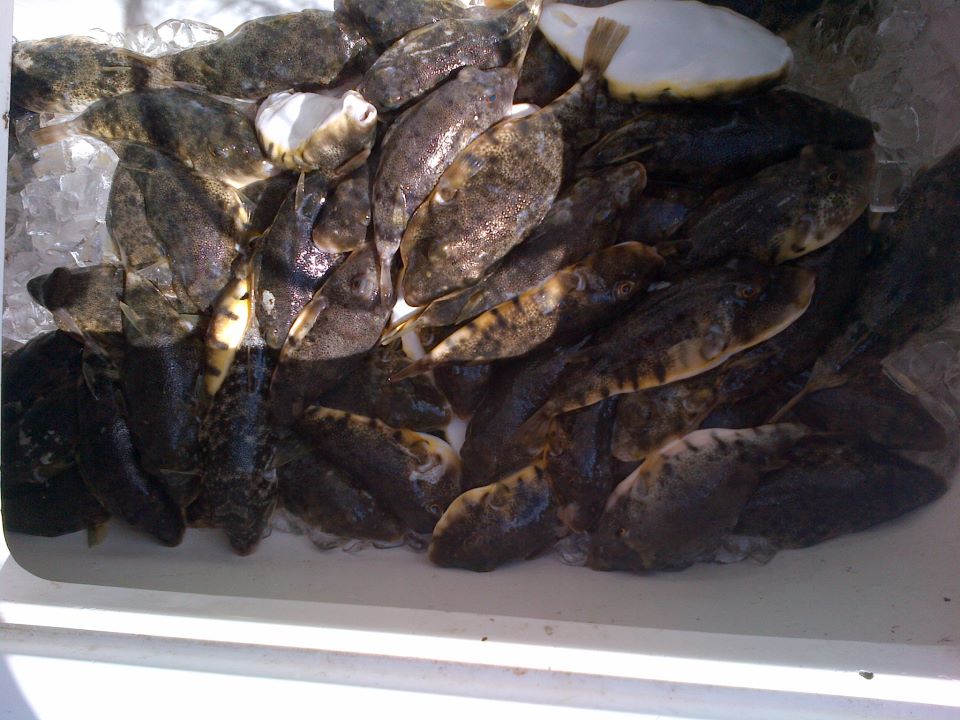 SPECIAL COYWOLF SIGHTING: Got a real good look at a singular black coywolf I was alerted to a couple months back. It fit the description given me to a T. It’s moderately-large and almost totally black, as in jet black.

I found it interesting (almost unique) how low to the ground it was running, literally running across a dirt road with all four of its legs bent, sometimes called a belly run.

These animals are so smart I believe this one knows it sticks way out in the light of day – but shines at night, so to speak. No seeing that sucker after dark.

As oft noted, coyotes and coywolves are sometimes active in the early a.m. and late afternoon when feeding pups. In fact, coyotes are often crepuscular – most active dusk and dawn – when in a more natural environment. When near humanity, they are strictly nocturnal.

Always be very wary of any coyote, coywolf, or fox out and about in the height of day. Such an out-of-character behavior has illness (including rabies) written all over it. An exception is when it’s trying to divert attention from nearby young.

Below is a terminal way to see how black a coyote can get.

By the by, Black Coyote (by name) was  a Lakota Sioux warrior who seemingly refused to give up his weapon at the Wounded Knee standoff, leading to the massacre. In reality, Black Coyote was deaf and didn't realize he was being ordered to drop his weapon. Trigger-happy white-men. Killing a black coyote is now said to doom a hunter. 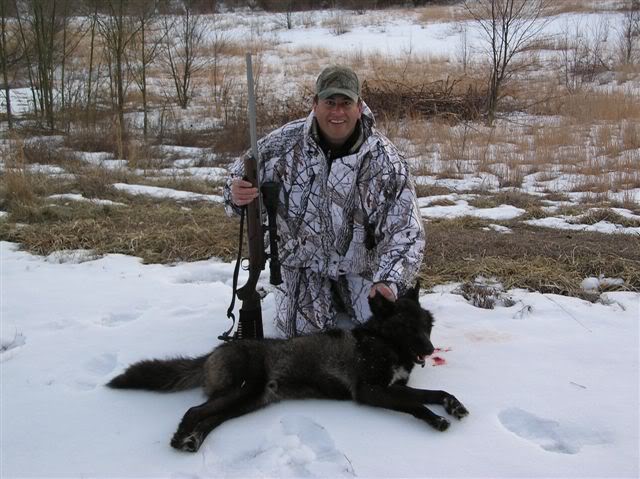 The ocean waters in New England have been heating up in recent years and fishermen and scientists are looking closely at the changes that warmer water may bring to our marine environment and its inhabitants.

Fish are very sensitive to any changes in temperature and with many of the commercial species in New England already at the southern limit of their range, there are fears that such warming may force some fish to abandon historically abundant areas such as Georges Bank for cooler waters.

As these shifts in fish populations develop, more Southern species such as the Atlantic croaker could become common in New England.

Wareham's Philip Caliri, who operates the Lady J, a charter boat out of Barnstable harbor, can testify to that. On a shark fishing trip last week, 35 miles out to sea, the water temperature was 79 degrees, he said. "And that wasn't even in the Gulf Stream. I would expect the temperature in deep water like that to be about 66 degrees."

In April, NOAA'a Northeast Fisheries Science Center in Woods Hole released a report on the marine ecosystem for the northeast continental shelf showing that the summer 2011 surface temperature was the highest in 157 years it's been keeping records.

The weather in the last decade is the warmest it has been in a century, according to Jeremy Collie, a biological oceanographer at the University of Rhode Island. "There is a trend in the temperature," he said. "We've had these warmer temperatures for longer." After this year's mild winter, the sea never cooled down, he said. In December 2011, ocean sensors south of the Vineyard registered a water temperature of 68 degrees in the waters next to the continental shelf, a very rare event. And the warming as accompanied by a corresponding jump in salinity.

As summer approaches its end on land, ocean water temperatures are now reaching their peak. And the changing conditions are now being observed year-round.

The warm coastal water in Rhode Island last winter attracted sea herring inshore for the first time. "We had herring trawlers fishing right off Jamestown," Collie said. "People weren't used to that. The warmer water could account for their changed distribution."

Butterfish, which have been scarce in the offshore waters, might simply have moved inshore also, he said.

Janet Nye is the lead author of a comprehensive 2009 NOAA study of 36 fish stocks, including cod, haddock, yellowtail and winter flounder. The study examined survey data from 1968 to 2007 to determine shifts in fish populations caused by ocean warming.

"We found the majority of the stocks were shifting to the north or moving into deeper water over the last four decades," said Nye, who now works as a biologist at the Environmental Protection Agency lab in Narragansett.

Fishermen agreed with her findings, she said. "They had to go further out or into deeper water to get the fish they need."

A more recent study on silver hake, also known as whiting, found the fish moving away to a number of new locations. "They were found in different places but the water temperature was always the same," Nye said.

Scientists also hypothesized that the warmer water is changing the food web for New England groundfish like flounder, cod and hake.

"More of the production from phytoplankton is being consumed in the water column, which benefits species like butterfish and squid," Collie said. This means less food reaching the bottom-dwelling species, which he said could mean more bad news for fishermen. Current stock assessments for cod and yellowtail flounder are considered so low that proposed catch limits threaten to put many commercial fishermen out of business next year.

The warming trend also seems likely to continue, Nye said. "We're in a warming cycle similar to one that occurred in the '50s. But we also think that this one is due to climate change," she said. The EPA is working with climate models to predict ocean temperatures in the future and to relate that to the temperature preferences of different species. Scientists believe that the ocean temperature will increase by 2 or 3 degrees Centigrade by 2100, Nye said. "The croakers will do great," she said.

So how about croaker and chips?

"People eat it, bone-in" she said. "But it's not as good as cod or yellowtail flounder."