Below: Uh, nailed it? Monday, August 22, 2016: The forecasted perfection is upon us. I won’t say that the skies can’t get any clearer since I saw vapor-trail-free skies after 9-11. But it’s the best and bluest we can do – and still keep killing the atmosphere.

Many normal-breathing folks didn’t know it but last week we reached one of the most dangerous ozone levels ever for one of the most ozone-polluted places in the entire nation: Ocean County, NJ. To be sure, it’s not our fault by any stretch. In fact, locally, we contribute next to nothing to our overall oft-sickly ozone level. I read a scientific study that indicated ozone from halfway across the country often ends up pooling directly upon us, as eastward bound air currents slow upon hitting the blocking maritime effect of the Atlantic Ocean.

I know the merchant realm hates when I bring up this ozone thing but how else can we fight for better air it not first admitting it’s bad as sin.

Further below you'll see the Eastern Atlantic and the Caribbean are heating up, cyclonically. I recently read we could be in for a doozy of a late tropical season. The current look might be the first signs. I watch the tropics with key interest, though seldom if ever with the trepidation. Not only do I still anxiously hold to the possibility of a decent storm generating "hurricane swells" for waveriding enjoyment but I always know there is absolutely nothing all the worrying in the world can do to change the course and severity of a storm. Then, if all hell is about to break loose via a upon-us landfall, we artfully take the next survival steps.

Below: This foam phenomenon associated with large storms is the result of microscopic algae being frothed into mounds. 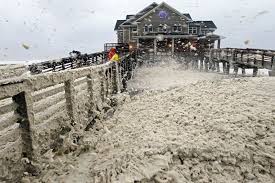 I often do decently in forecasting what normal weather systems can do in terms of LBI impacts. By using a ton of gathered experience and anecdotal input, I'll always take an educated shot at interpreting what might happen right here on LBI, in far more more specific terms than general forecasts. That said, I admittedly and fully suck at predicting tropical systems. That goes back decades. It's almost as if the storms are tuned into my predictions and joyously do the opposite. Oh, I'll still be giving it a shot with any hurricanes and TS insights I can muster but you can count on my forecasts -- and then run with the dead opposite. And despite a broken watch being right twice a day, that leaves 1438 minutes a day that it's wrong. You figure the odds. 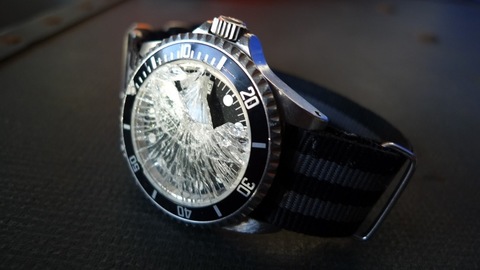 Water temps are in the low to mid 70s, oceanside. The bay will lose some of its heat this week, mainly due to night low temps in the 50s. That could spark a late-summer bay (near inlets) fluke bite. It will also drive most straggler baitfish out the west bay. However, falls have taught us that a certain segment of baitfish society holds firmly in west day lagoons, sometimes into November. Not sure why.

Truly huge schools of rainfish are off LBI and IBSP. If there are any snapper to one-pound blues in the system, they'll track them down, as will exotics like Spanish mackerel and (see below) some surf mahi. I have never seen a mahi caught in the surf but I did get one tiny on in my castnet many years back, from a Ship Bottom jetty.


Crazy summer. Mahi from the beach 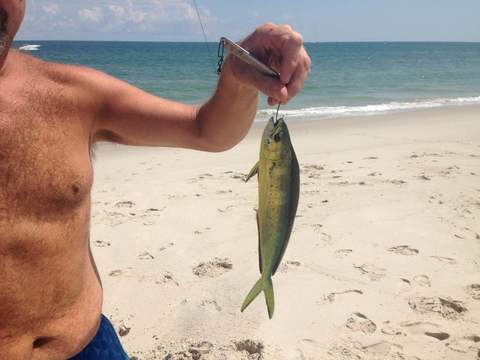 I knew merely mentioning a slowdown in fluking would see me inundated with fluke reports. Nonstop fluking action for many. I want to most point out a wonderful flattie effort by Eric Maest. From Fri... Sorry about the blood in this one. No way to take this photo without it. 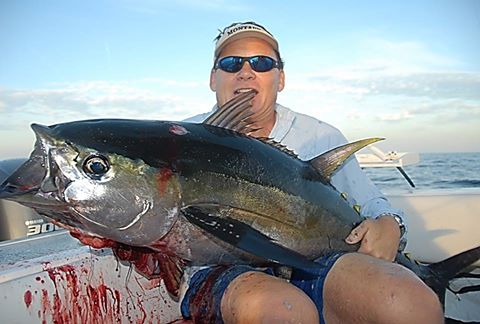 From Sat. We were actually tripled up. Dropped one in the mayhem.
— with Dom Tarallo. 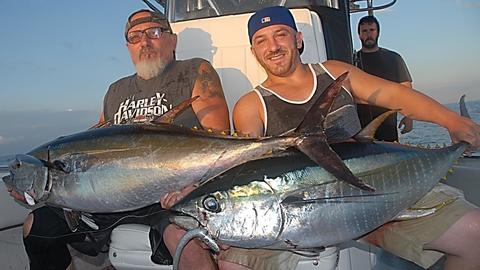 The heart of hu
rricane season has arrived, and we’re monitoring three systems We’ve entered prime time for hurricane season and are watching three areas of disturbed weather in the tropical Atlantic Ocean. Of these three systems, one has some potential to affect the U.S. coast — though it’s not a sure thing.

The system of greatest interest, is identified as “99L.” It is located 650 miles east of the Lesser Antilles, and we’ve been watching it since late last week. It has not been able to overcome the influence of dry air, and is still not even a tropical depression. The majority of models do not forecast 99L to substantially strengthen, but the few that do bring it close to the Florida peninsula and Southeast U.S. coast early next week (7 to 10 days from now). At this point, it is not anything to be immediately concerned about, but certainly worth monitoring. Track forecasts from a variety of global and regional models. &ldquo;TCLP&rdquo; is not a model, but is &ldquo;climatology and persistence&rdquo;. (UAlbany)

The westernmost of the three storms (west to east in the Atlantic basin), Fiona, is now a tropical depression centered about 650 miles southeast of Bermuda. It formed four days ago and weakened some this weekend. It is not forecast to strengthen, but it may not completely dissipate either in the next few days. It could make for a breezy weekend in Bermuda.

The easternmost tropical wave, or “90L,” is south of Cabo Verde and is much better organized than the previous waves to pass through the general area. It is very close to becoming a tropical depression, and will likely earn the name Gaston before 99L does. (If 99L is subsequently named, it will be called Hermine.)

Models agree this system will track out to sea, much like Fiona, turning to the north over the central Atlantic. But, unlike Fiona, model guidance indicates that this has a decent chance of becoming a fairly strong hurricane.

THE BIRD IS NOW ONLY KNOWN FROM SPECIMENS HELD IN MUSUEMS. JACK DUMBACHER/CALIFORNIA ACADEMY OF SCIENCES

Renowned for the role they played in inspiring Charles Darwin during his voyage on the Beagle, the Galápagos Islands scattered across the Pacific Ocean are fabled for the spectacular wildlife they are home to. Now researchers have just added another beautiful bird to that list, the San Cristóbal Island Vermilion Flycatcher, only with one catch: it’s already extinct.

The bird, thought to have bitten the dust in around 1987, is now considered to be the first modern-day extinction of a bird species on the Galápagos Islands; not a particularly coveted title, it has to be said. The existence of the unfortunate little bird was only revealed as researchers studied historical collections of specimens kept at the California Academy of Sciences, and after analyzing what was originally thought to be various subspecies of Vermilion Flycatchers, discovered that those living on San Cristóbal were genetically distinct enough to warrant their own species.

While what were thought to be two subspecies living across the Galápagos were instead found to be two species, Pyrocephalus nanus and Pyrocephalus dubius, the latter was last spotted in 1987. “A species of bird that may be extinct in the Galápagos is a big deal,” says Jack Dumbacher, co-author of the latest study describing both the discovery and extinction of the species inMolecular Phylogenetics and Evolution. “This marks an important landmark for conservation in the Galápagos, and a call to arms to understand why these birds have declined.”

While it is as yet unknown what exactly led to the downfall of the birds, it is suspected that the main culprits likely to be behind the extinction of the ill-fated flycatcher are two invasive species also implicated in the decline of other native wildlife. The rats that were introduced to the islands in the ships of the first visitors often climb into nests and feast on the birds’ eggs, while the larvae of a parasitic fly feed on developing nestlings, often killing them in the process.

Yet some think that the elevation of the bird to a species level might conversely help bring it back. “Wouldn't it be great if the San Cristóbal Vermilion Flycatcher weren't extinct? No one is looking, I'm pretty sure of that,” said Alvaro Jaramillo, another co-author of the study. “At the very least, this discovery should motivate people to survey and see if there are any remaining individuals of the species hanging on that we don't know about.”

Perhaps then, despite there being no evidence over the last two decades of the little bird, people simply haven’t been looking hard enough. But even if the San Cristóbal Vermilion Flycatcher’s luck has indeed run out, important lessons can be learned from this that hopefully can prevent further extinctions.


JANET WITH HER FIRST TAG AND RELEASE HAMMERHEAD 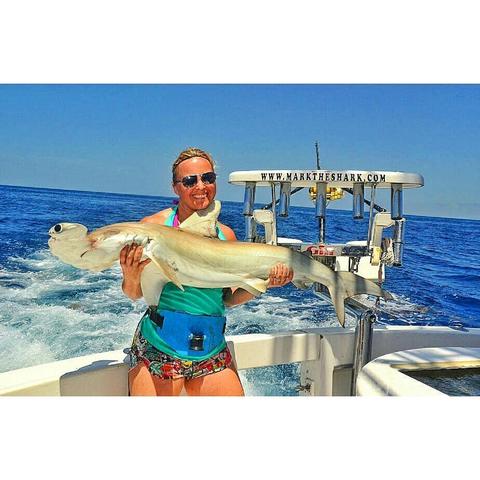