"I've seen what you've been doing to those poor dogs, cat. Try me on for size."

Vintage footage of why step-by-step instruction manuals were required with all new units ...

Below: Pissed over getting her 15 seconds of fame cut in half.

Monday, August 01, 2016: The weather remains iffy, as if it’s unsure what it’s doing. We’re clouded in – and grassed over. Such is life down below when we get into weather patterns in neutral due to slow-moving systems and stalled fronts.

I just looked out over a stirred ocean with 15 mph onshore winds and three-foot short-period northerly waves. It’s blowing hard enough to make both surfcasting and ocean fluking a sloppy go. As you’ll see in the video below, the grass is arriving in waves, typical for summer northeasterlies.

Rainwater runoff has gunked up portions of the bay, as seen in very off-color water conditions in some places. It should clean up within 24 to 48 hours.

Got reports of mullet in the bayside LBI. That’s a tad ahead of time but not by much. They’ll now hang on this side of the bay fattening up. These mullet are bait-worthy but only if fished live or very soon after netting. They are packed with phytoplankton. If you hold on too long (or freeze) these sometimes-called mud mullet, they will rot out. It is still many weeks before this year's crop of mullet will move out into the ocean, after which they literally crap out all their algal contents, making them plump and right for freezing – or even keeping icy-cool for up to a week.

Below: The good stuff. The kingfish are still in the mix but the tons of eel grass will make them nearly untargetable.

See kingfish profile down below. Are you sure you knew it's a drumfish?

By the by, there is a decent showing of coquina clams in the Harvey Cedars swash. I think these little bivalves attract panfish, including kingfish. I once caught a 29-inch striper totally loaded with them, some of the clams still moving. That was also Harvey Cedars. That year, the coquinas were so thick the wet sand was carpeted with them when waves receded. Here is the picture of Mike Saulle weighing the fluke(8.4 lbs) in at the beach haven tuna and marlin club on Thursday 7/28.  We originally were planing on going to some wreaks on my 23' century but after heading out of LEH inlet and fishing  about 5 miles off the beach we noticed some clouds and the inlet was fogged in so we decided to fish the bay.  Around 4 pm on an incoming tide mike "aka bottom Mike" landed the 8.4 pounder in the bay near beach haven using gulp and a minnow which made the day. TEMPS OF CHANGE: Looking at a thermometer, you’d be hard-pressed to see the average worldwide increase in ocean surface temperatures. From 1901 through 2014, temperatures rose at an average rate of 0.13°F per decade. Just try  detecting a decade’s worth of temp uptick inside a little tube of mercury.

Nonetheless, I’m among many who are convinced that the far more discernable big-picture increase in ocean temps from 1880 to now is more than just a quirky low-impact trend. When combined with insidiously destructive acidification from a fossil-fueled and industrialized planet, the surfaces of oceans are changing, including our neck of the seas. 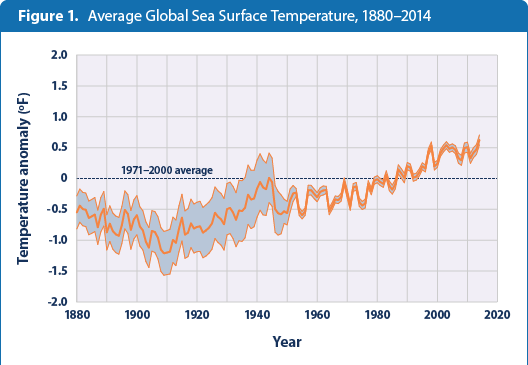 Don’t run off thinking I’m getting into the impalpable climate change debate. Too complex and convoluted. I’m totally in the what-it-means-for-me angle. And that’s where even the minuscule can become massive.

The current tiny upturns in sea temps aren’t enough to spike hurricane activity or hike the ocean enough to fill our coastal toilets bowls with saltwater. However, it might already be doing odd and inexplicable things to our angling realm, at least by my reckoning – and, maybe worth mentioning, others far more attuned to and degreed in the maritime realm.

Sea things along the East Coast are changing. They  can’t be pulse-felt yet but they’re transitioning. Toward what? Even the marine life has no idea.

I’m likely going a tad solo by asserting that this year’s remarkable surfside shark showing could have a jolt of sea-change associated with it. I’ll garner more agreement upon suggesting the unprecedented showing of springtime chopper bluefish is being spiked by sea-change, possibly indicating a long-term northern shift of the seasonal biomass, making us the new epicenter. 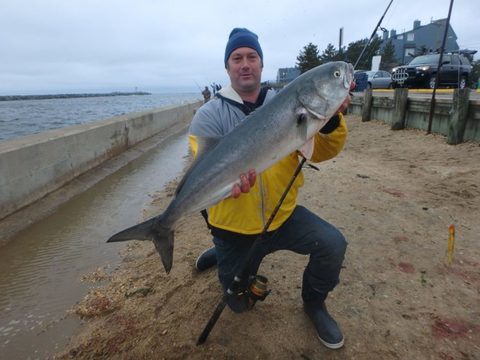 Admittedly, a spring worth of nonstop slammers had its ostensible upside. Many anglers snapped out of winter stupors and straight into the jaws of marauding choppers -- out the kazoo. But, to every action there is an equal and opposite reaction. While that would seem to be physics mumbo-jumbo, it might apply to a possible downside to unusual spring madness, i.e. autumn numbness.

Nobody waxes more optimistically than me when it comes to something good this way comes, angling-wise. But I’m fearing a correlation between massive schools of spring blues and a, equal/opposite disappearance of our wonderful smaller cocktail “eater blues,” both spring and fall. Cannibalism? Maybe, but I’m not pointing a finger, considering a chopper can lop it clean off.

I’m not bringing all this sea-change stuff to go into some tirade on Earth-killers ruining our planet for fun and profit. I’ll do that in other forums. Instead, I’m looking ahead to fall, which is already doing stretching exercises just over the horizon. This fall could be a pivotal year in determining if sea warming is currently beginning to effecting how we fish – and what we fish for.

At the same time, I’m cheering on a recovery fall -- with waves of two-pound blues and trophy-grade stripers showing, soon after joined by summer-fattened chopper blues. A banner fall could prove we’re not slipping into big-time ocean changes quite as quickly as some fishery quirks might indicate.

Are the frozen bubble days all that far off??

Below: What is the job title of this guy? 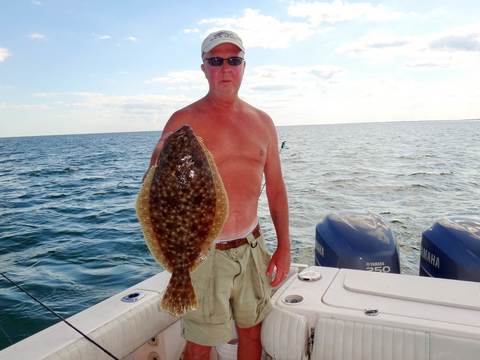 $50,000 Cash for the largest fluke over 12 lbs in our doormat fluke category

$1200. cash first place prize for the largest fluke in each of our nine ports regardless of

the number of entrants. (Nine ports from Jersey City to Cape May)

Sign up online or print a mail in application at www.jcaa.org. For those signing up online, the additional tournament options including the doormat fluke category and Calcuttas are at the bottom of the page.

Information is also on our Facebook page and I plan on posting results there sometime Saturday evening. https://www.facebook.com/events/266103630416310/

The Northern kingfish, Menticirrhus saxatilis, is popular with many saltwater anglers, and it's no wonder. These fish are known to put up a good fight, and their tasty, white meat is well worth the effort.

Notable characteristics are the long spine on the first dorsal fin and a barbel on the chin. Dark, irregular bars are present along the body of the fish. The first two bars form two distinct V-shapes. The bold markings and a dark longitudinal stripe behind the pectoral fins distinguish it from the two other species of kingfish. The markings on Southern kingfish and Gulf kingfish are not nearly as prominent and do not form the V-shaped pattern.

Range:
Northern kingfish are found in the Atlantic Ocean from Maine to Florida and in the Gulf of Mexico from Florida to Yucatan. They are most commonly found from the Chesapeake Bay to New York.

Habitat:
Usually found in schools in shallow coastal waters, Northern kingfish prefer areas with a hard or a sandy bottom. They regularly appear along the Atlantic coast from late April to October. It is unknown where Northern kingfish migrate for the winter, but it is thought to be offshore and in deeper water.

Size:
Northern kingfish can grow 18 inches long and can weigh up to three pounds, but greater lengths and weights have been reported. Commonly, these fish range from 10 to 14 inches long and weigh from one-half to 1.5 pounds. The largest ever recorded anywhere, a three-year-old female caught in a commercial gill net, was more than 21 inches long and weighed 3.3 pounds.

The New Jersey state record was caught in the surf in Margate on Oct. 25, 2003 by Art Higbee, who used bloodworms for bait. The fish was 18¼ inches long and weighed two pounds and six ounces - just three ounces more than the record set 10 years ago.

Spawning and Growth:
Spawning typically occurs at the bottom of bays and sounds, but has been reported to occur outside of estuaries. The spawning period ranges from April until August, depending on the region; older fish tend to spawn first. Males become sexually mature around age two and females around age three. The eggs float, and within 46 to 50 hours, they hatch in waters 68 to 70 degrees Fahrenheit.

Northern kingfish grow quickly during their first year of life. Fish spawned in late May or early June can reach a length of 11.8 inches by October. The major period of growth is from mid-summer to late fall, with little or no growth occurring in the winter.

The average life expectancy of the Northern kingfish is two to three years, although they are known to live as long as four years.

Feeding:
Northern kingfish are bottom feeders that eat shrimp, small mollusks, worms, young fish, crabs and other crustaceans. Compared with other members of the drum family, the smaller eyes, barbel, inferior mouth and body shape indicate that Northern kingfish feed primarily by using their senses of smell and touch.

Recreational Fishing:
Late summer produces the best results, and fishing can be done in the surf or by boat close to shore. Small hooks and light tackle should be used and clams, bloodworms or squid cut into bite-size pieces are the most effective bait. Fishing in the bay can be done by anchoring in shallow water about eight to 15 feet deep and chumming with clams. Single or double hooks can be used, depending on your preference, with a small weight to assure you are fishing on the bottom. Some anglers like to use bobbers also. The same bait and hooks are used for surf fishing, which is the more popular method. Try retrieving your line slowly to improve your catch.

Monster Shark From the LBI Surf

This 8ft MONSTER sand tiger shark was caught off the surf of LBI NJ. This shark was released very quickly and safely for both the handlers of the shark and t...