Monday, April 24, 2017: The bluefish bite is often elusive – then it attacks, identical in temperament to the marauding-horde lifestyle of the species

Teaching children to ... Who knows what the hell they're teaching these children .

Kiel proves the effectiveness of his new Sunken-SUV fishing method ...

Monday, April 24, 2017: The bluefish bite is often elusive – then it attacks, identical in temperament to the marauding-horde lifestyle of the species.

“Jay, We fished for hours with nothing but one small bass then the blues moved in and our arms were hurting by the time they moved out and it went dead quite again,” reported an ardent weekend warrior. 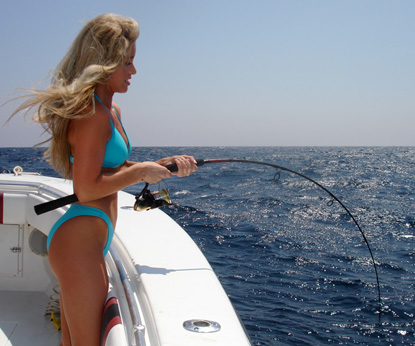 I want to praise many of those week-working folks for their sheer dedication to making the most of their couple fishable days. Many of them are astoundingly talented anglers. Many of the weekend warriors I know are inching toward retirement times – with visions of everyday angling dancing in their dreams. Rock on, Boomers. ISSUE: Most recent email related to this subject: “Jay, … Please include more details with photographs.”

If you’re a regular in here, you know I’m photo-happy. Be it emailed pics or social media looks, I thoroughly enjoy images … and passing them on. When it comes to adding details, I do have constraints -- unwritten but etched in granite. The most obvious is an everlasting-gobstopper taboo against offering exact locations. 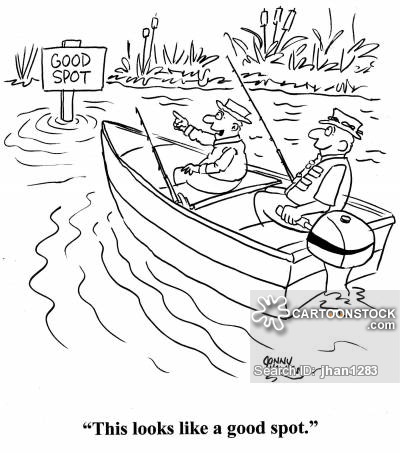 I don’t mess around with this “no burning” mandate. So, many images in here are simply for viewing pleasure – and maybe firing folks up to get out fishing.

When I am site-specific, it is always with permission of the anglers/photographers – and, even then, only if it doesn’t open a spot to an angler overrun.

I’ll note here that sites like the South Jetty are free game.

Below: My photo from last spring. It hasn't been quite this crowded yet this year ... but give it time. 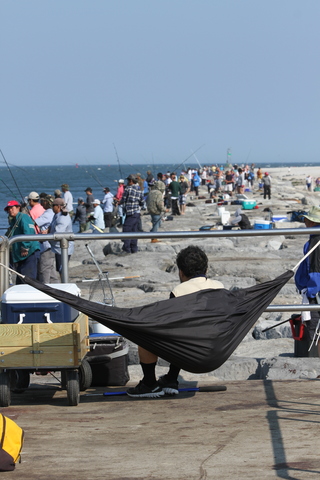 No, I’m not overstating the impact of this column. It’s small potatoes. However. through highly contagious word-of-mouth, all it takes is the modest number of folks in here passing on location info that is then further passed on and so-on and so on. It becomes an inverted pyramid ... with the sky the limit.

That said, I’ll try to add a tad more info when I can, though time is always working against me. I do this blog just for the fun of it, meaning work takes precedent – which explains the typos or grammatical snafus that leak in here, with its one-and-done template.

In writing reality, one of the things I excel at are grammer and spellin’ …

UPDATE: You can always ask for fishing info in Walmart’s sporting goods. Tell me how that works out.

“Excuse me, ma’am. Do you know if there are any bluefish around?”

“Our pet department is up front and to your right, sir.” Early Last week fishing wasn’t as easy as it has been , Blue fish were found to be elusive on some trips while others seemed abundant. Both Chunking and poppers scored the blues but not witho… 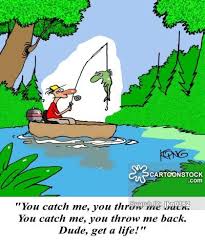 Below: For anyone who thinks soccer is always boring ... You shoulda seen this match. 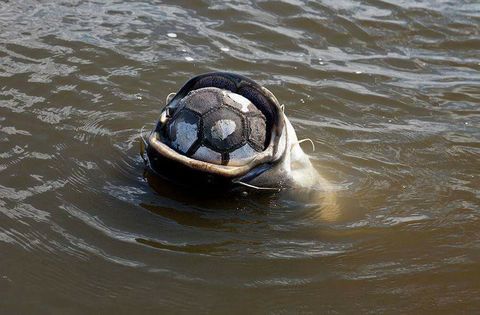 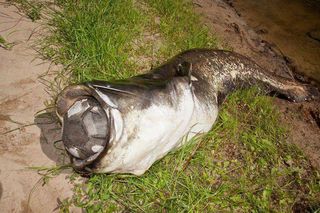 What is black and brown and gray all over, Black squirrel sightings are very rare The black squirrel occurs as a "melanistic" subgroup of both the eastern Graysquirrel and the fox squirrel. They are more common in Canada and in the Ohio Valley. The ratio of black squirrels to grey squirrels is 1 to 10,000. Only seven towns in Ct. have officially reported sightings.I was lucky enough to see two in the same day, 5 mi. apart, these are the first ones I have ever seen. Getting ready for umbrella days to come ... 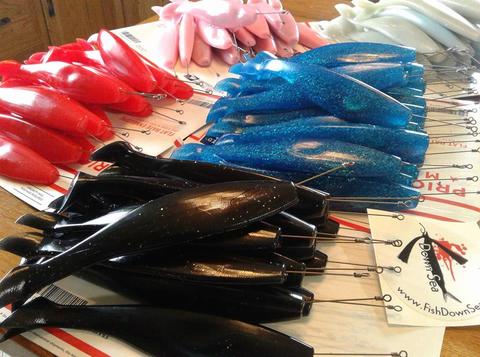 Los Angeles - As it turns out, some of the best cooks in the world think lionfish, a venomous predatory fish which is breeding out of control and destroying marine ecosystems in the Atlantic Ocean and the Caribbean Sea, is delicious.

The chefs gathered in Bermuda on Wednesday for a competition dubbed the "Lionfish Throwdown" where they challenged one another to come up with the tastiest solution to the problem of invasive lionfish.

"Every chef likes to be sustainable in what they are doing," said Chris Kenny, head chef on Necker Island in the British Virgin Islands.

"Lionfish are going to keep spreading, and it's not going to stop unless people step in and do something about it."

Native to the Pacific Ocean, lionfish have no natural predators in Atlantic waters and females can spawn nearly 2 million eggs per year.

"On reefs where sport divers are actively diving with harpoons to try and control the lionfish, they actually do a pretty good job," said Colin Angle, executive chairman of iRobot Corp, a consumer robot company that builds and designs robots.

"But that's a very small percentage of the ocean ... We needed something far more flexible that could go far deeper, longer."

Angle, who recently founded Robots In Service of the Environment (RSE), a nonprofit organization set up to protect the oceans, built a machine named the Guardian specifically designed to hunt and capture lionfish.

"We basically drive the Guardian up to the fish, position it between two electrodes, apply a current and stun the fish, knocking the fish out," said Angle.

The device is still in its early stages of development. Its first prototype, which was unveiled earlier this week, can capture and hold about 10 fish before resurfacing.

Angle said he intends to make the robots affordable enough to entice fisherman to buy the machines in hopes that they will hunt the invasive species in greater numbers.

He also wants to turn lionfish hunting into an online sport.

"With advances in wireless technology, we can actually have an app where people pay to go hunt lionfish and capture the fish by remotely operating the robot," he said, adding that, if robots can catch lionfish, a new market in which chefs can turn an environmental hazard into gourmet cuisine might emerge.

One account I found on-line: The testosterone-fuelled black squirrels are faster, fitter, fiercely territorial and more aggressive, beating greys to food and mates. It is a subgroup of the same species of squirrel as greys but in some areas has already become the dominant variety.

.....they are really beautiful to see....also saw quite a few over the bridge in Elmsford, NY.