Wednesday, May 14, 2014: Winds ran roughshod over the easy angling we had a short while back – when bass were being landed left and right. Still, a sweet striper came through the suds, one to Rob V., 31-lbs 14-oz.  See  below. 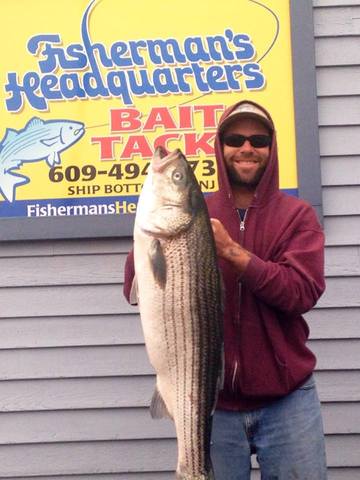 We are seeing a modest window of angling opportunity today, with touches of fog. Then things go SE gusty, near disgustingly so. SCAs will carry into the weekend, when they’ll go west, hard but far more tolerable as offshore winds, smoothing out the beachfront surf. In fact, I see some decent surf bassing potential this weekend. Sorry, but boat angling of any sort will be utterly iffy, though Sunday might offering some cast-off potential.

The fish are here, no doubt. I especially like the ongoing plug action. With rougher beachline conditions, big-ass brightly-colored poppers and even splashers pencils and such are being destroyed by blues – which is a good and fun thing. Surface bluefishing is the height of high-impact nearshore fishing. Even metals work as surface fare. If equipment can handle it, larger metals can be zipped crazily across the surface. It drives big blues crazy. Of course, lighter line and smaller setups can’t take the pressure.

Here's proof of the action, via Fisherman's HDQ: (Below) Terry Griffith of Little Egg just weighed in 46.75" 37.85-lb bass. He caught it off the surf on clam. 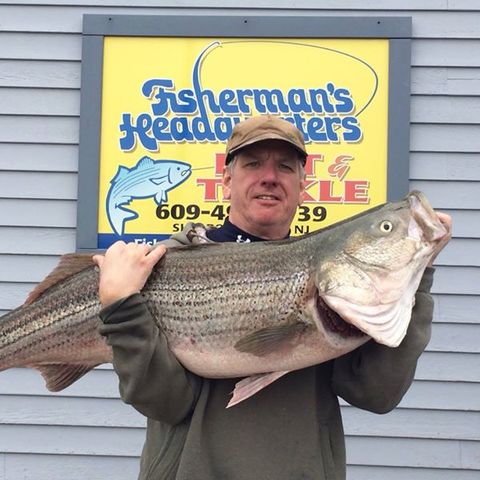 Eric fishing night bite in Ship Bottom got this 43lb (Boga Grip) 47" on a bunker head. Another one not in Simply Bassin'. Tsk! Tsk! Shoulda, woulda, coulda. Lesson learned. He's signing up tomorrow. The captains of the Beach Haven Charter Fishing Association have been getting a taste of the developing fishing season, but recognize the best fishing should be arriving any day soon.

Captain Gary Dugan of “Irish Jig Sportfishing” spent some time on the waters of Great Bay recently looking for striped bass. He reports the water was calm but his thermometer registered only 52-degrees. That was enough to chill off the striper bite, but he managed to put together a nice catch of feisty bluefish. Captain Gary says they took a few of the blues home for fresh fish on the grill.

He also noted a few boats drifting live eels in his area but says none of them managed to pick up any bass.

Captain John Lewis of the “Insatiable” reports the boat is now in the water and will be in Beach Haven by this weekend to do some fishing. He passed along the word that his mate Ryan Schramm and fishing friend Sean found some nice black drum in the bay as well as some short striped bass on Mother’s Day. They were fishing in the waters off Beach Haven in about 6-feet of water.

The captains are putting together the final touches on the curriculum for the 2014 Junior Mates Program. There are some new twists this year including a special sponsorship from Berkley Fishing. Berkley will be donating quite a few fishing supplies to the junior mates as they progress through the course.

The program runs for several weeks and covers a wealth of material necessary for a mate to learn. The youngsters will learn many facts about fishing and especially how to become a qualified mate. Interested candidates ages 13 and older are welcome to register. Complete information and registrations forms on the Junior Mates Program can be found at the association’s website atwww.BHCFA.com 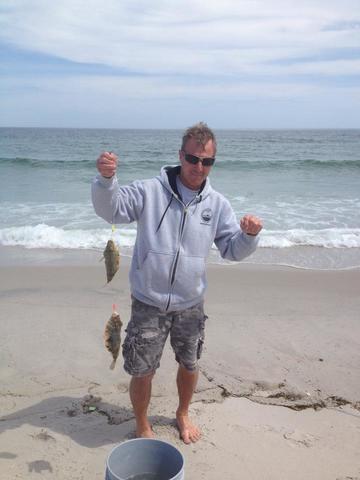 Blowfish are everywhere, ocean-wise. Beach anglers are picking them up, even on 5/0 hooks. I’m encouraging folks to just keep a few. A fellow I saw targeting them had well over a dozen, proving they can be caught in impactful numbers. Ironically, the fellow mentioned how “full of roe” the blowfish have been. I didn’t say anything. Catch-and-release of “legal” fish is meant to be an option. Plus, 90 percent of all surfcasters release the spawning puffers. 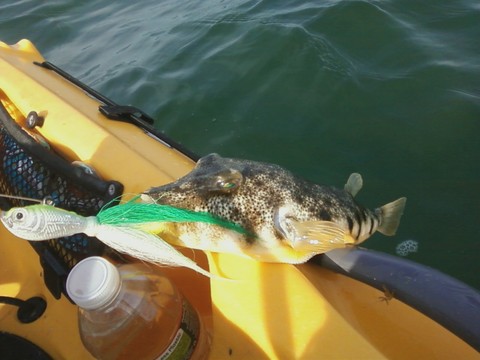 What does the impressive spring showing of blowfish mean? That remains to be seen. We all recall the near catastrophic overabundance of blowfish back in the 1960s. It was literally impossible to hook anything else but blowfish. Making eco-matters worse, the overpopulated puffers savagely fed on baby flatfish, both fluke and winter flounder. Biologists observed blowfish pecking off the tiny fins of the young flatfish, disabling them for a slow and hideous consuming. Not that we humans didn’t get back at them -- by slicing captured blowfish behind the head and yanking out the tail meat pieces, as the fish were still alive. We’d then throw the still gill-moving fish back in the water, where they would tail-lessly suck in water to breath. Last summer, there was a phenomenal, just-right showing of blowfish in Barnegat Bay. They were caught by the bucket load by a small but very dedicated group of folks DC and OC channel folks. In fact, a couple of those bay sharpies said it hadn’t been that good since the bad old days -- which even they admitted were a fishing fiasco. Those same baysiders thrive on variety even whan targeting blowfish. It they could only catch puffers they would not be happy water campers. Water campers?

I will note that the explosion of blowfish in the 60s was thought to have pollution attributes – or detributes.  I was pretty raw back then so I can’t recall the technical data supporting that supposition but I will sadly point out that Barnegat Bay has never been as polluted as it is now. If the attack of the killer blowfish was to repeat, again, we’d have nobody to blame but ourselves – and our fertilizers, weed killers, bug killers and even road runoff.

(Below: All-head bluefish; Filled out bluefish.) 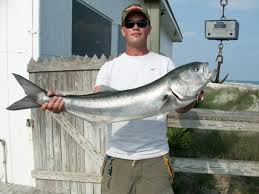 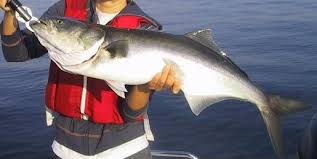 When it comes to bluefish, I have to mention that we have already seen all-head spring bluefish pushing 13 pounds. Those same fish, with just a modest amount of summer fattening here and later up north, will easily push 18 to as much as 20 pounds. That’s not guessing. That’s based on the length of bluefish and the weights we’ve averaged for same during the fall Classic.

Which bring up the great chopper bluefish mystery of Fall 2013. We had a diabolical absence of autumnal choppers. It was the worst chopper year in decades. Keeping that in mind, I can’t guess at where the current caught-and-released long-ass blues will end up next fall. Might they succumb to some deadly predator up north, possibly 7 million-plus seals?

Is global warming forcing bluefish so far north that, come fall, they’re way up off Greenland? If they’re that far north, they’ll return south way out at sea, not having time to skirt the eastern Seaboard. It’s not impossible.

Most of all, is it time for one of the disappearing acts that bluefish do? They can go totally AWOL for decades and decades on end. I’m hoping had against that possibility.

Weakfishing has been interesting in the feast-or-famine hooking success being seen at prime sparkler sites. I get word of folks nabbing three or four jumbo models in a quick session yet those same folks, at the same sights, unable to buy a touch in following days.   Yes, that’s called fishing but the weakfish stocks are so tedious the meaning behind such swings in hooking success are very significant. To me, it marks arrival of only small pods of spawning weakies, as opposed to steady, healthy influx. Of course, arriving weakfish can come in waves right into the summer. There is also the low-spawn biomass of spike weakfish, which tend to over-summer in Barnegat Bay. We don’t get a read on those until about July or later. 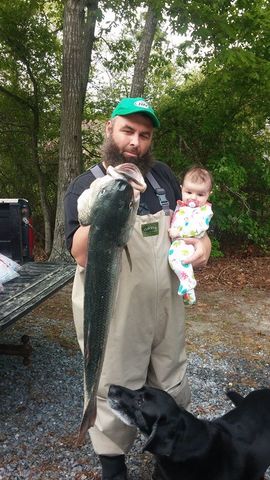 If you didn't already love dolphins: